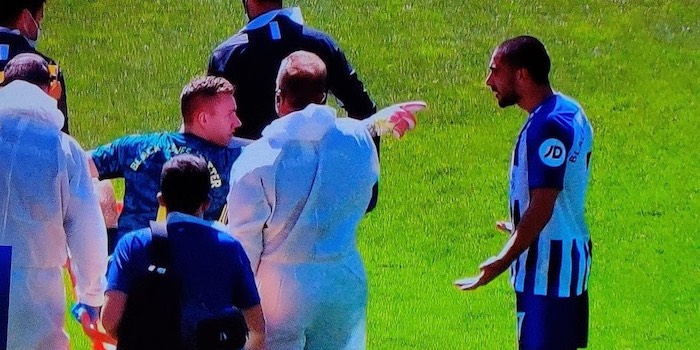 Mikel Arteta refused to criticise Brighton striker Neal Maupay after his role in an incident which saw Bernd Leno stretchered off the pitch during the 2-1 defeat to Brighton today.

The Frenchman nudged the Arsenal keeper as he claimed a ball in the air, knocking him off balance and causing him to land badly and hyper-extend his knee.

The German’s screams were instantly audible in an empty stadium, and while the Arsenal boss says that the injury doesn’t look good, he declared the incident ‘unfortunate’.

“I believe that no player has the intention to hurt anybody and I believe in this case it’s exactly the same, it was unfortunate,” said Arteta.

“Bernd’s injury doesn’t look good and we will have to assess him probably tomorrow, but it can happen on a football pitch. It’s a knee injury, I think he had a hyper-extension of the knee and we have to assess the damage.

“He was in a lot of pain but we will have to wait until tomorrow to see how bad the damage is.”

He also refused to use the loss of another player to serious injury as a reason for the final result, which saw the Gunners go down 2-1 to their relegation threatened opponents, with Maupay – of course – scoring an injury-time winner.

“No, I don’t think that’s the case because a lot of things happened afterwards, we scored the goal and we had more than enough opportunities to put the game to bed so we can’t use it as an excuse,” he continued.

Earlier Arteta declared the way his team conceded both goals as unacceptable, while Leno himself clearly felt that Maupay was at fault – angrily pointing his finger at him as he was taken off the pitch.

Fingers crossed it’s not as serious as it appears to be, but it’s the latest in a litany of injuries Arsenal have suffered in recent times.

Calum Chambers suffered a cruciate knee injury in January; Lucas Torreira had his ankle broken against Portsmouth; Pablo Mari probably needs surgery on an Achilles tendon problem picked up on Wednesday night; while Granit Xhaka also has an ankle injury sustained in the same game.

Sokratis is out with a thigh strain, while loan signing Cedric Soares won’t be available for two weeks because of a facial injury – that’s if Arsenal do a deal to extend his contract, a situation complicated by the fact he’s out of contract with his parent club Southampton at the end of June.

The goalkeeping situation is also a bit up in the air. Current third choice Matt Macey’s deal runs out on June 30th, and if Leno is going to be sidelined for some time, they may have to offer him a short-term deal or dig deeper into the reserves for back-up to Martinez.

Looked to me he broke his tibia or fibula, so if that didn’t happen and it’s just a hyperextension, I’d consider it better than I had thought.

You stood there and fist bumped the fucking player who did your keeper in, and who then goes on to score the winning goal against us.   I couldn’t believe my fucking eyes when I saw it happen.   Also refused to say anything in the post match about him as well.   The most watered down fucking managerial stuff I have ever seen. Imagine what Leno must be thinking? None of his teammates backed him. When he’d been bailing them out all season with countless unreal performances. Then he see’s his manager fucking high five’ing the cunt who’s just… Read more »

I was really pissed off at their lame reaction to the incident, and then to read this bullshit from the coach? Unbelievable!

It’s one thing to keep it calm and profesional with the media but one on one? I’d tell that thug cunt to piss right off if I was Arteta.

It’s not true that none of his teammates backed him. Guendouzi tried to choke him after the game.

‘You can’t say he intended to cause that injury’

Yeah no one said that so shove that straw man up your hole. We’re saying pushing someone in mid air is a snakey piece of shit move that should be punished. Also Matteo, if you wanted to get him, do it on the pitch or you just look like a petulant child.

I said it. And I stand by it – Maupay deliberately set out to injure Leno.

Maupay should serve a custodial sentence for assault.

You’re right, but I think he intended to cause that injury.

Guendozi probably didn’t want to get sent off , it didn’t help in the first in arch back

Neither does our midfield, by the way.

Sigh ! – think I might prefer it if football could be put back in lockdown…

It was a bit of a turn and barge into Leno. He clearly won the ball and Maupay was miles away from it. After the match, he said he went for the ball. My arse. Nowhere near, mate.

He didn’t want it to end like that, maybe, but he knew full well what he was trying to do. A little bit of Arnautovich on Debuchy in that “challenge” or that neanderthal who sent Alexis into the ditch at Norwich. It’s only a little shove but the guy is in the air with his hands occupied so he has no opportunity to adjust his fall. As far as I’m concerned that’s border line assault, you can just imagine the kind of damage and sound that fall would make if it were concrete he was falling on not lush grass.… Read more »

Arteta handles it the way a manager should. A calm.ajd measured comment to avoid any unnecessary shit slinging. We wouldn’t want him to act like Mourinho.

But we as fans don’t need to hold back. Someone please shut Maupay’s piehole by giving him a proper shove mid air, just like he did to Bernd, and then see how he likes it after he lands badly. The gobshite!

What a mess. Time to blow it up n start again. Arteta needs trust and support.

How the fuck did the motm stay on the field, never seen 1 player put in so many bad tackles in a game and not get booked, let alone not get a red, and 3 min injury time, they score in 95th

Auba got a straight red for a late tackle early in the season. The player ended up not being badly injured, but the red was probably deserved as the potential was there. But the refs need to be consistent…giving Auba a straight red for that, and no card at all on a play like today which also is a foul with a decent chance of injury is BS.

Hence the persistent claims that refs are biased against Arsenal. I try not to go down that route as it can easily be written off as being a victim. But today I did wonder. What the fuck kind of shit refereeing does Martin Atkinson call that?

If you combine the Maupay barge and the multiple (8?!) fouls Bissouma committed without seeing a single card, it’s far to say Atkinson had a shocker. But then he has form when it comes to Arsenal. Fans should petition that he not be allowed to ref our matches in future.

What a naive and stupid thing to say that you think no player is out to harm other players. How did he think that would come out?

What kind of person believes that, or believes that other people will think “oh yeah, that sounds pretty sensible”. Where does he think we all are? In the Night Garden (you know what I mean if you have kids)?

Yeah OK he maybe didn t wany to seriously injure him but too much of this kind of play particularly against Arsenal goes unpunished Leni has ball in both hands Maupay shoves him he happens to be in mid air, I bet the team talk was for them rough them up a bit do its in his mind to do that. Also the players need to use that to make sure we defeat teams that do this. By the way the Aubameyang goal also did not look offside!

Maupay said that Arsenal got what they deserved – seems like a nice chap. Taking a player out in the air is a straight red card in rugby – seemingly OK in football?

Well, if you listen to neanderthals like Rio, football is a contact sport so you have to have things like that. Oh… and there was no intention. So tired of that argument. People don’t get hurt ONLY because you intend to hurt them. Accidents can cause damage too.

Clear foul with no intent to play the ball. In rugby that would be a clear red card, no questions asked. What is the point of VAR.

Intention isn’t really the issue. Leno had the ball before Maupay barged into him. So, there was no possibility of gaining possession. It was a reckless and negligent challenge. At the *very* least he should have been carded. His post-match explanations are just BS.

How do we prepare for restart of season?

We seem to have porcelain ankles.

And I thought we spent money on the medical/fitness side of things.

How do you prepare for lesser team ruffians shoving you mid air?

If you want to pop round my house and jump off my dining table I’ll show you how much fitness helps you if you get a deliberate nudge in the back in mid-flight.

Being physically fit and having a good medical team doesn’t prevent you from being shot, being in a car crash, or being nudged off balance by a scumbag when you are already flying through the air in what was, until the nudge, a controlled jump.

Mr. Nice man, please man up and slam the broke for deliberately hurting your key keeper in the process of trying to get him to handle the ball outside the penalty box. Yep, that was deliberate. He might not have intended to hurt him, but it was deliberate for sure and he should be barreted and battered with words for trying to get a cheap free kick by player the man when he couldn’t reach the ball. What an irony of a speech? Leno was key and extremely important to this team for crying out loud and you are here… Read more »

The point is that he didn’t give a f*ck whether Leno got injured. He was only interested in getting an advantage, and knew he had a weak referee so had a bloody good chance of getting away with it. Even if he did get called on it he knew Leno would be worried about where Maupay was the next time he went up for a ball. Its a win-win situation for any scumbag player like him   With animals like him (and Mooy, and that multi-fouling slime-bucket whose name I have already forgotten) there is no real consideration of consequences… Read more »

Abject. And rather than looking at Europe, with Southampton next, should look behind them.

Fucking Maupay. Cannot wait for good old Karma to catch up with that cunt. When it does – and it will – I will laugh my bollocks off.