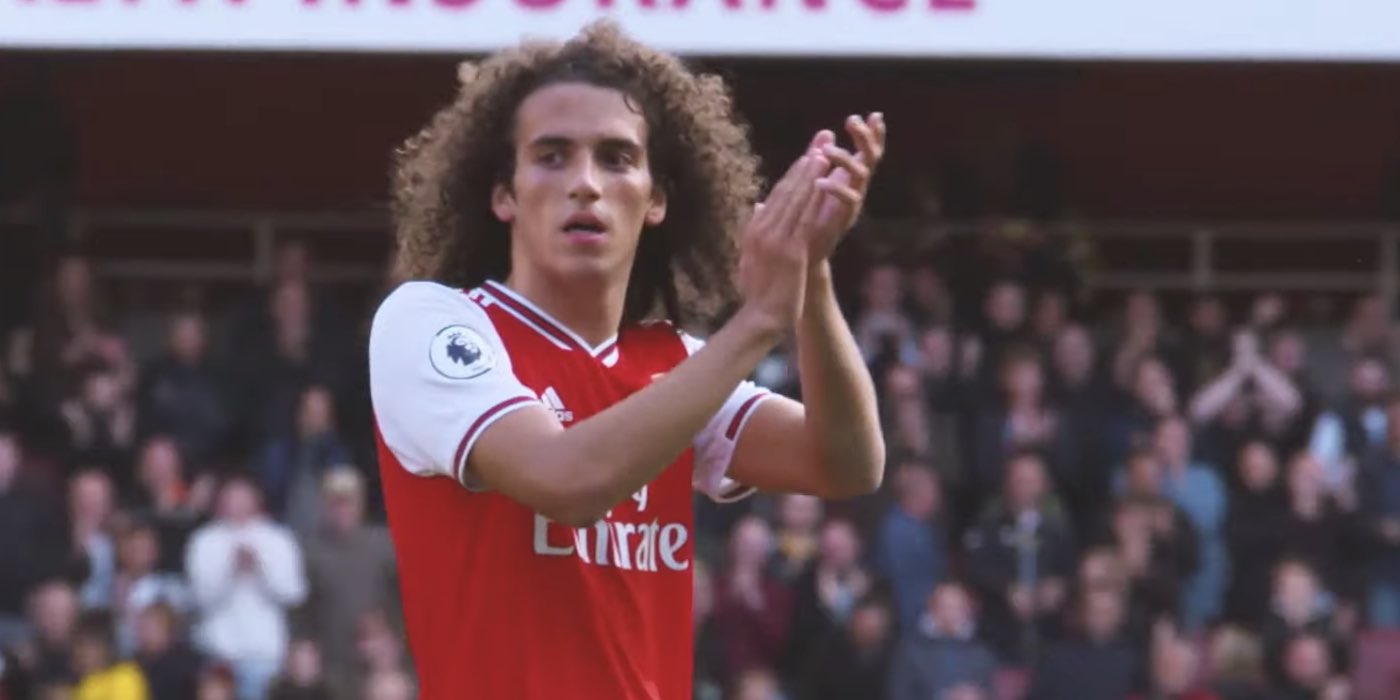 Mikel Arteta has refused to address the rumours that Matteo Guendouzi is open to leaving the club this summer after being disciplined this week.

The midfielder was left out of the 2-0 win over Southampton, and on Friday morning stories emerged in L’Equipe which raised questions over his long-term future in North London.

It was something that Arteta was quizzed about during his press conference ahead of Sunday’s FA Cup quarter-final against Sheffield United, but as you might expect, he wouldn’t go into specifics.

“As I said whatever internal issues we have we’ll deal with them privately, and I’m never going to make any of that public,” he said.

“All the players that are here, I am counting on them. If they want to jump on the boat, they are more than welcome, and that is always my mindset.

“I am here to help all of them to improve individually and collectively, that is my job.”

The Arsenal manager would not reveal any team news ahead of Sunday’s trip to Bramall Lane, but admitted that the schedule means he is going to have to rotate to keep players fresh and to protect them from injury.

A recall for Guendouzi would suggest some harmony has been found, but his absence would do little more than add fuel to the fire.

For more on Guendouzi, we discuss this on the new Arsecast Extra.

They are making such a big deal of this situation. He made a mistake and it should be handled internally. Every young player makes mistakes, and they should be supported. Given his age, and how many games he has played, I think he has been really good compared to our other players. You can tell he is still raw, and makes mistakes, but he is one of the very few players who we got that gives a shit.

Yes…he’s been dropped, now give him the chance to get over it. This is a big test of Arteta’s man management skills imo & I hope he passes it. Some Gooners are far too quick to write off young lads who aren’t perfectly behaved. I would rather someone with a bit of fire in his belly who loses it the odd time than someone who is perfectly behaved but doesn’t hate losing. Let’s not forget we made this mistake before: pushing Chesney out in favour of a ‘nicer’ but far inferior keeper in Ospina.

Did you really join in the comments just to point out the correct spelling of Szczesny’s name ? Wow.

He is learning as well.
When was the last time he needlessly fell over to gain a foul.
Positioning improving all the time
Can take ball in tight spaces and come out with it.
Can buy a foul when needed.
Makes himself available.
progressive with ball
Appears to be pretty robust.
Defends his team mates.
SOmeone with some speed beside him (AMN??) could make a really interesting midfield

Actually, it seems as if it may be Guendouzi himself who is making a big deal of the situation. It appears as if he’s reacted badly to his second disciplinary incident with Arteta and threatened to leave in a huff. I hope he doesn’t leave but if these reports are true he may be forcing Arteta’s hand.

Some of French players are very emotional, specially the young ones. If we give it a few weeks hopefully things will calm down. I am also sure the media is making this bigger than it should be. But if he still wants yo go after 2 weeks, then yes, we must think of other options. No player is bigger than the club.

Anybody else read “fuel to the fire ” like James Hetfield from Metallica? No? Fuel to the Fiiiiyyyya!

Can we get 50 mil for him so we can buy partey already?

To be fair, if that happens then his investment was a great piece of business for us. Invest in young players who have potential and then sell to a richer club for profit.

I’m hearing that we would take £35m. Typical Arsenal selling our best talents for peanuts while other smaller clubs get top dollar for theirs.

35 million for him sounds about right

I want a couple of marverick players in the team not just players responsible but boring like Arteta himself was du ring his career. I recently watched a video call between Henry and Balotelli. Mario now regrets all the things he was doing and attributed that to foolishness of young age. Balotelli is perhaps a bad example but Vieira was doing exactly what Guendouzi did last week. Lauren could have done that as well. Vieira even wanted out to join Real and Wenger did not try to let him go. Although Pep always shows the door to problematic players, he… Read more »

The fact that you consider Arteta a ‘boring’ player tells me all I need to know about you. Stroll on.

The fact you think Arteta wasn’t a “responsible and boring” player tells me about your liking of facts.

I’m conflicted on this one. On the one hand it is not clear to me what his function in the team is, but on the other, he at least looks like he gives a shit, and with this current bunch, that’s a valuable commodity.

Always wanted to share that story: Summer 2018 i had the “chance” (pure coïncidence) to play one round of golf with a guy named Guy Hillion. As he saw my Arsenal putter cover we started to discuss about british football and the “Guy” revealed me who he actually was : Ch*vs french scout since 2006. Needless to say that he knew the game and everything that goes with La Ligue1 & 2…. Long story short, what he told me was this : “You will post probably regret Guendouzi’s signature, except if you sell him three times more than what you’ve… Read more »

I have to admit a mix of Rabiot and Ben Arfa (even the best halves of these two in terms of attitude) would be too much to handle for a club. But people label young players too quickly. I have a lot of problems with this. Even Mbappe has been quite a Diva this season.

You’re the gift that doesn’t stop giving aren’t you.

Did you at least beat him?

If Guendouzi doesn’t want to be at the Arsenal so be it.

Playing for the Club is a massive privilege and if he isn’t smart/mature enough to realise it then he can kindly fuck off.

Guendouzi = Tom Cleverly at United. All of our youngsters except for Saka are extremely overrated.

Two Wilshere’s, a Nasri and a Koscielny. I bought the new kit with a Guendouzi because the kid reminds me of a young Ray Parlour. I think he’s got a lot of potential, and love his fire. He needs some discipline both positionally and emotionally. But he will leave. It is this prophesied in the red cloth!

Haha I concur. I have 2 RVPs one in the red&white and the other in the hell awesome holland away back in 2010? Along with Cesc, Wilshere…

Refrained from buying Saka too.

I’ve got Sylvinho, RVP, Cesc, Eduardo and Wilshire. I don’t get names on the back anymore. I feel your pain!

But, unless you’d got Bergkamp on the back of your shirt, you’d have the same problem with pretty much any name, surely?

Nah, I’ve still got an old shirt with Wright on the back….. No regrets.

I don’t want him to go, I have enjoyed watching him since he joined. He just needs a better partner in midfield who compliments him, fills in the gaps he has and let’s him play his own game. I heard someone recently talk about Petite, maybe even the Arsecast, and that makes a lot of sense to me, if we did land Partey then we really could have our Vieira and Petite back. If we really need the cash and we do want Partey I would rather we sell both strikers than Gendoozy, we have enough talent up front who… Read more »

Sell both strikers to get Partey in order to complement Guendouzi in the middle of the park?

Think I’ve heard it all now.

He won’t be the only one open to departure.   Torreira, Ceballos, Aubameyang, Sokratis likely will get their heads turned as well if sufficient offer comes in.   We don’t want to shell out our midfield too much. We will (SHOULD) need to add a bit more ready made experience.   Guendouzi and Willock BOTH decent midfielders in the making. Not so much AMN who I find too careless for the role.   We need someone frankly who can hold and dribble for us. As mentioned, if Dortmund don’t ink Emre Can, he could be a possibility. Or a high… Read more »

Lots of players joined us for big wages and champions League football. The four lads you mentioned all did . I don’t know all the ligue 1. Players you mentioned.
Think kloops approach of buying the best of the rest in premier League . E.g. Robertson, van dyke. They don’t take a year to bed in see Pepe.
For example
Centre midfielder from Watford, dunk from Brighton , Cantwell Norwich .etc..

I fucking hate the media. Utter, utter cunts. Tell them to fuck off, Arteta. I know I would. The shit-stirring cunts.

Our new management also includes coming across as underdogs and manipulating the media and referees. So can’t just tell them fuck off everytime but selectively

Guendouzi is a decent player who is tidy on the ball, and unlike many Arsenal players does have a bit of passion in his play. Even if it not always channeled efficiently. However, if Arsenal want to challenge for top four and above they need more than just decent, they need exceptional. Players like Vierra don’t come cheap, but they are moving in the right direction with Saka and Martinelli. It is this kind of calibre they need throughout the team, or results like the Brighton game will remain regular occurrences.

I’d like to see him or Willock play alongside Xhaka more often.

Does he show all this passion/spirit during play? Not so much imo. Really it is just petulance. Can we afford another petulant player? No. Will he grow or get coached out of it? Maybe. On balance I would consider selling him. The no.1 job of Arteta is to produce a cohesive and mentally tough team.

Distraction from real deep issues. Remember Mhykitaryan…inexperienced Edu and reliance on super agents….Sanlehi, owners who don’t care to understand too much…or perhaps don’t care too much.