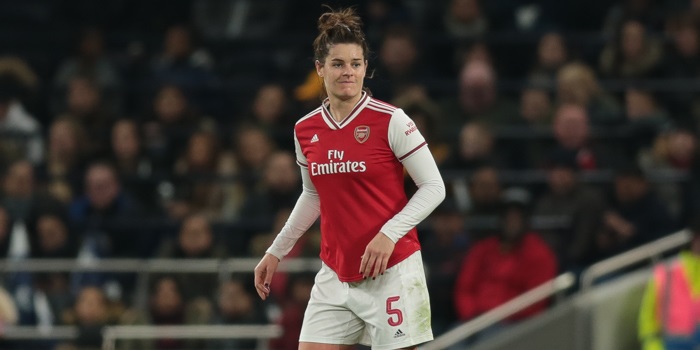 Louise Quinn left Arsenal Women this week. With her contract expired, the Irish international will move onto pastures new. Quinn was an integral part of the 2018-19 title winning squad, playing 19 of their 22 league games. 2019-20 was a different story for Quinn, where she made only 6 league starts. So what changed?

In the summer of 2019, the Gunners signed Jen Beattie from Manchester City, who previously played for the Gunners between 2009 and 2013. Beattie slotted straight into the Gunners defence alongside Leah Williamson and the pair formed a complementary partnership. While Leah plays on the front foot and engages attackers, Jen plays the ‘sweeper’ role slightly behind her, mopping up any danger behind Williamson. [I spoke to Leah about their defensive partnership back in March].

This is borne out by the statistics [courtesy of Statsbomb]. Beattie registers 5.12 ‘aggressive actions’ per 90, the lowest of any outfield player in the Arsenal squad. Jen defends the 18-yard line, allowing Leah to defend closer to the opponent’s half. At 0.92 tackles per 90, Beattie is the 10th most frequent tackler in the squad this season- Beattie is a player that uses her positional nous to snuff out danger in the deeper areas of the defensive third.

Jen’s father and brother were professional rugby players, both of whom represented Scotland and you can detect some of that grounding in the way she uses her body to manoeuvre opponents off the ball, often placing herself between the attacker and the ball to avert danger. Her physical gifts are even more apparent when it comes to aerial duels.

She wins 2.46 aerial duels per 90 which is by far and away the most in the current squad. [Lia Wälti is second with an average of 1.37 aerial wins]. Her ability to head danger away partially accounts for her very high clearance statistics- she makes 3.38 clearances per 90, the highest number in the squad, comfortably ahead of Viki Schnaderbeck who is the second most prolific clearer with 2.46 per 90. Beattie is the last line of Arsenal’s defence and a super calm presence, often nipping into the left-back spot to clear danger when Katie McCabe is committed to the attack.

Beattie was badly missed when a hamstring injury kept her out of the team for the bulk of the winter. She was absent for the crushing 4-1 defeat to Chelsea and the 2-1 defeat against Manchester City, she also missed the Conti Cup Final defeat to Chelsea. Arsenal conceded from a header and a setpiece in the damaging league defeat at City and it’s difficult to believe that would’ve happened with Beattie present. She came back into the team as a substitute during February 3-2 victory over Liverpool in Chester.

When I spoke to him after that game, manager Joe Montemurro identified Jen’s introduction as a substitute as a game changing moment. “One of the big changes in today’s game was when Jen Beattie came on and I think the ball speed just stepped up and we were able to find passes a lot better. I think Jen has been a big miss over the last few weeks.” 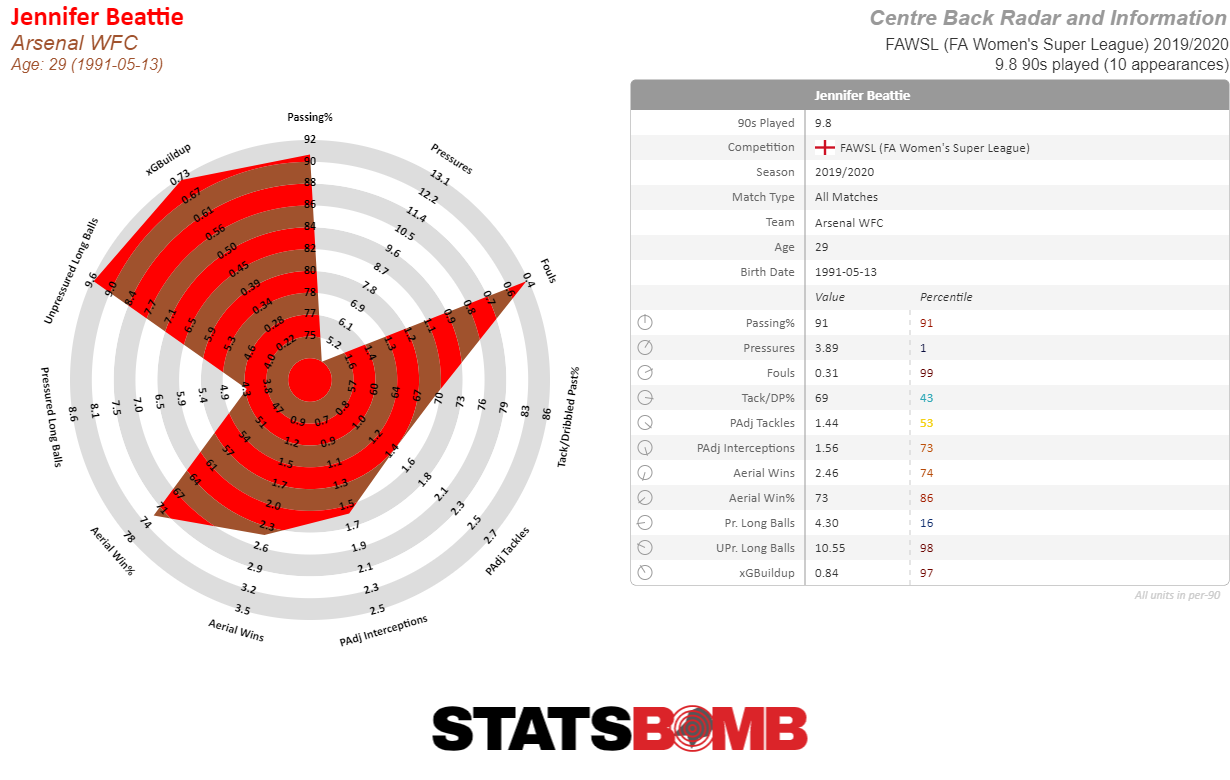 Jen’s qualities as the deepest defender are similar to Quinn’s. It’s Beattie’s use of the ball that really sets her apart. Leah Williamson is rightly considered one of the best ball playing defenders in the business, but Beats uses the ball just as well. She averages 84.23 open play passes per 90- that’s the highest in the WSL. She enjoys a 91% pass success rate too- the highest success rate in the league.

She also hits the 4th highest number of long balls in the division with a 71% success rate when she does go long. Her passing isn’t conservative. Beattie passes the ball more often and more accurately than any other player in the league and that is why Joe Montemurro took the ruthless decision to bring Beattie in, despite Louise Quinn’s excellent season in 2018-19.

It’s not just her passing that oils the engine of the Gunners attack, she dribbles the ball into the middle third at a very high rate too. She averages 72.55 carries per 90, the highest in the division, with Leah Williamson 2nd in the WSL at 64.74 per 90. Beattie has a 99% success rate with her forays with the ball. It is true that a lot of this can be explained by the fact that opponents tend to sit off against Arsenal and leave the centre-halves be.

It’s also true that, as explored in our interview with Leah from March, opponents have tended to man-mark Williamson. In that interview, Leah expressed surprise at Manchester City opting to man man-mark her during the league game between the teams in October. “Jen Beattie played next to me in that game and she has played for City, so they know how good she is on the ball. It was almost redundant because it meant she had more time.”

Yet the fact that Arsenal play against deep blocks is exactly what makes the comfort of Beattie and Williamson to pass and dribble through the thirds so important and Beattie’s data shows how good she is at it. The Gunners usually pass out from the back under Montemurro and the Scottish international is very comfortable in these situations. She is an experienced, adept defender and an outstanding technician with the ball. Jen Beattie has been Arsenal’s most underrated player this season in my view.

Great read Tim. Makes you wonder how much we could do with a responsible no-nonsense defender like Jen in the men’s team