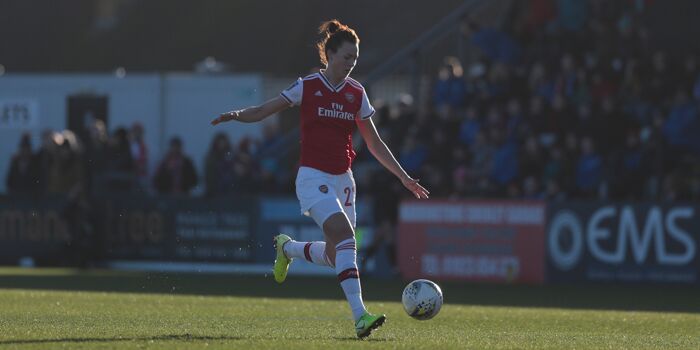 Arsenal defender Viki Schnaderbeck has signed a new deal with the club. The Austrian international joined from Bayern Munich in the summer of 2018 but spent most of her first season on the sidelines with a knee injury.

However, she was a key member of the team last season slotting in at centre-half, starting 10 WSL and five cup games last season. Viki revealed in March that she had been offered a new contract by the club and that she was considering the offer. Retaining her maintains depth in the Arsenal defence, with Louise Quinn, Katrine Veje and Emma Mitchell leaving this summer. Two more defenders are expected to join the club this summer as well.

“I’m really delighted to have Viki stay with us,” Joe Montemurro told Arsenal.com. “She’s a really experienced professional who is always willing to work for the team and go that extra mile to help someone out, so she really personifies what we’re trying to achieve. We’re ecstatic to retain her at Arsenal.”

“I’m truly very happy to finally make it official,” said Schnaderbeck after signing. “It just feels so right to stay with this club with the philosophy, with the staff and players, and it’s both the big picture and the small details that feel right to me.

“I still think there is so much more to come from me and now I just can’t wait to be back (at London Colney) and start training, not alone, but with my teammates again!”

Great news! A really interesting, intelligent and versatile with great passing and composure on the ball. I’m so relieved she’s staying.

Very good news! I still believe we can qualify for the Champions League next season, even if we need to win this year’s tournament to do it.

Yes👍. Welcome back Viki. Me and a few others were getting a bit “twitchy” about the potential loss of a fourth experienced defender from the squad for the WCL tournament week.