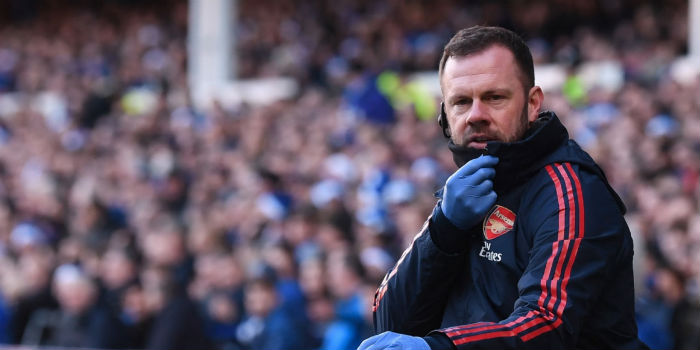 According to The Athletic’s David Ornstein, Arsenal’s head of physiotherapy, Chris Morgan, will leave at the end of the season to return to Liverpool.

Morgan joined the Gunners in the summer of 2018 after a couple of years at Crystal Palace. He’s also spent time with the FA, LA Galaxy and prior to that was at Anfield for over a decade.

News of Morgan’s impending departure comes not long after we warded off a Liverpool approach for Gary O’Driscoll. It’s said our Head of Medical Services was persuaded to stay at London Colney after chats with Mikel Arteta.

It sounds like technical director Edu has already lined up a replacement for Morgan.

Ornstein writes that talks are at an advanced stage with Bruno Mazziotti, a compatriot with whom he worked at Corinthians and the Brazil national team set-up.

Mazziotti has been a physio at Paris Saint Germain for the last couple of seasons and it sounds like he’ll be leaving the Ligue 1 giants when their Champions League campaign concludes in August.

Much like the team at Arsenal, he’s spent the Covid-19 lockdown trying to coordinate remote training programmes for players.

Given our soft tissue injuries what are Liverpool seeing that we aren’t?

Maybe he contacted his old mates, and said “this is a circus, could I have my old job back?”

More than one party to a job negotiation….

Do physios even have agents? Kia at the wheel!

Ok, Bruno shapes up Guendouzi, AMN and Rob to be tough as that and we are winnin’ it.

Is every single person we bring to the club from this point on just going to be a mate of Raul or Edu? Expect the announcement of Raul’s aunt as tea lady at London Colney any day now

Not far fetched. In Brazil, serving family and friends first is very important. It is cultural. It might also be the ability to convince people you connect with like Wenger with France.

Lol. I’m starting to think Raul is recreating the movie Parasite at the club… I wonder if there are family members living in a bunker under Highbury House…

Brilliant, I was just going to mention parasite and saw your comment 🙂

That was effin hilarious- how much money do tea ladies make? Maybe another rate if you’re in with the Big Guys? Let’s get on and win more games…?⚽️⚽️⚽️

Do tea ladies have agents?

Definitely a step up for him. He can tend to injuries suffered in the Champions League, while here he could only treat injuries from domestic competitions or – in the best case – the EL. Farewell and good luck.

Is Edu a Parasite?

Do write headlines for The Shun?

I still remember the way Edu left as a player. It was like: I am getting a contract with another club. I am not renewing, bye.
I never saw him as an Arsenal person through and through but now it is difficult to say this because of his position.

With the on-going injury nightmare Arsenal has had, perhaps this is Edu’s shrewdest move yet. Here, liverpool scum, take our incompetent physio!
May their best players struggle for fitness henceforth, and never again be match fit. Eff them.

All the complainers … WTF?
With Arsenal’s injury status the last what, 10+ years, how can anyone be anything other than thrilled with this change. Whatever this guy was doing, it wasn’t good enough.

Yeah if only people would just stop criticising Raul and Edu we wouldn’t be 9th and 11 points off top 4, clearly the main issue.

We might be hiring a new Head of Physiotherapy who was good enough to work with Brazil’s national team. Might be good to have a new approach, or it might not work out.

We don’t actually know enough to judge yet, which means criticizing anyone for this already is just sad and irrational

I’m not a huge Raul guy per say but somehow we’ve gone from complaining that Wenger wouldn’t sign a lot of big up and coming players b/c he refused to pay agent fees (that’s how we got Xhaka over Kante) to now complaining that Raul pays too much in agent fees.   He should take some flack for the Auba & Saka contracts, but I find it more than a bit funny that blogs is constantly complaining about the contract situation per Mustafi, Ozil & Welbeck. All were publicly told to move on and simply refused. Letting their very expensive… Read more »

Yes I think some of it is growing pains. We’re still adapting to a new reality where players are now more inclined to seek Bosman deals, as Wenger himself foretold.

The size of Premier League wages across the league mean we’re not the only team facing the issue of player contracts – look at Pogba and Angel Gomes at Utd, Cristian Eriksen leaving Spurs for free, Leroy Sane at Man City.

Neither Raul or our rivals have a magic solution to modern player power.

Raul objectively sucks. Choosing superagents over Sven’s data-driven approach was the canary in the coalmine.

You Milsintat groupies are embarrassing.

Lulz. This is so funny. You mean the Sven who as Sporting Director of VfB Stuttgart got them back into the 1. Bundesliga after only one season down? You mean the one who got us to sign Bernd Leno and Aubameyang, our two best players?   The one who brought Jadon Sancho, Lewandowski, Dembele and Pulisic to Dortmund?   Great Ornstein podcast this AM on The Athletic about how Liverpool’s data-driven approach starting with Comolli has paid off handsomely. Look at their squad even 5 years ago. I don’t think anyone in our team could get into their squad now.… Read more »

Wow you’ve invested so much emotional energy into this guy I almost admire it actually.

This is some real big-dick online fandom energy, not for some silly Korean popstar, but for the data-driven genius who signed 35-year old Stephan Lichsteiner, that gem no-one else in Europe had heard of.

Have we found something that Edu actually does?

this is a podcast in portuguese with bruno mazzioti

Thanks for linking this. Hopefully an English translation of the text will appear for us non-Portuguese speakers

I a brazilian guy, but my english is very bad so I can’t translate this lol

Soon our ball boys will move to Crystal Palace.

As long as our balls don’t end up in Watford or get close to being their captains cojones, I’m okay with that.

Honestly, this is a very shrewd signing. This is the man that cured Alexandre Pato, and several brazilian players have spoken about their appreciation for his work.