I didn’t have huge expectations for Arsenal post re-start but I did hope that the matches could at least be a fun distraction.

For the first time in a while, I think that was actually true. I appreciate Norwich helping that along with their dedication to trying to play an attacking style but Arsenal also did an excellent job dominating possession, pushing Norwich back and then actually creating some dangerous opportunities.

I don’t want to get my hopes up but with the teams above Arsenal in the table struggling, the distance between Arsenal and qualifying for Europe have compressed. The Champions League is still probably too far away (thanks Unai and Raul) to realistic but getting back into the Europa League seems pretty realistic again (my model give it slightly more than a 1 in 3 chance). The Europa League kinda sucks but given Arsenal’s ugly finances anything extra is not something that fans can turn their noises up to with the rebuild required at the club.

Arsenal 4-0 Norwich City: By the graphs 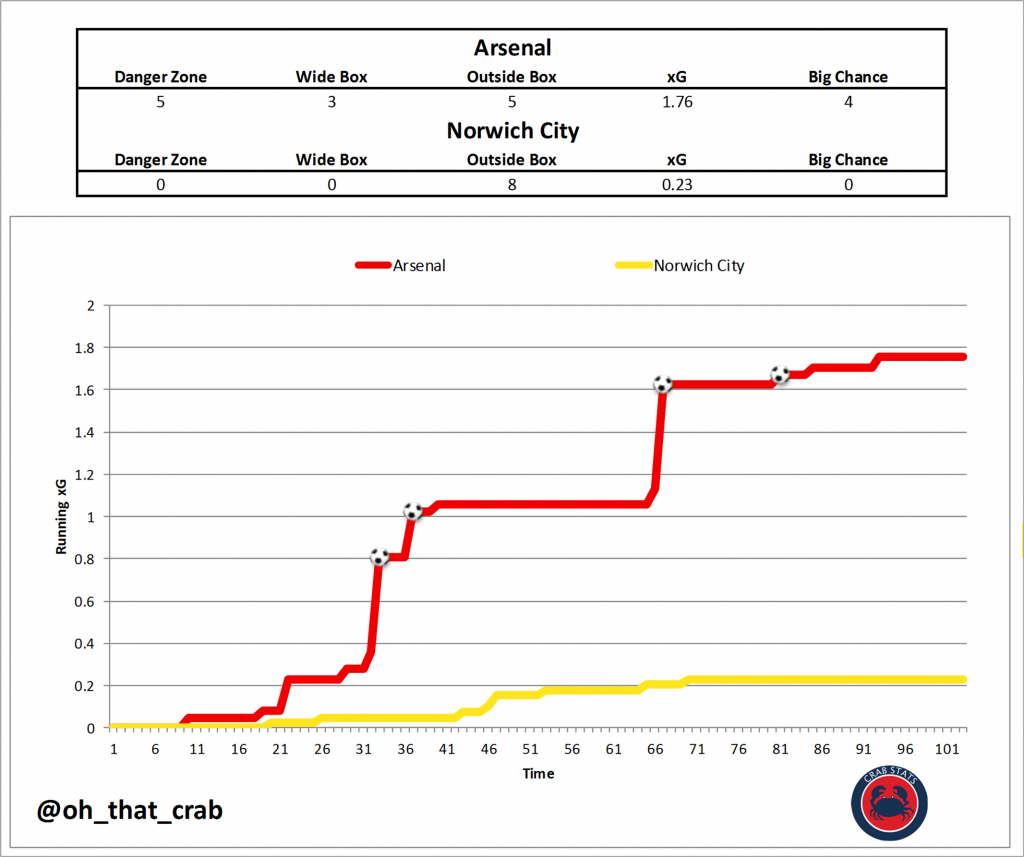 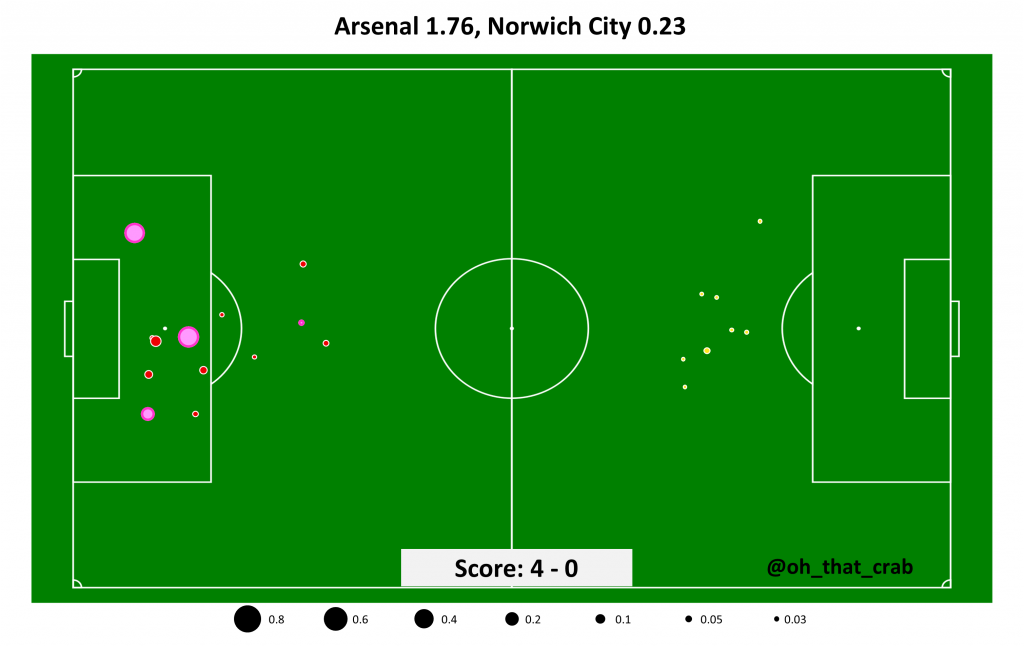 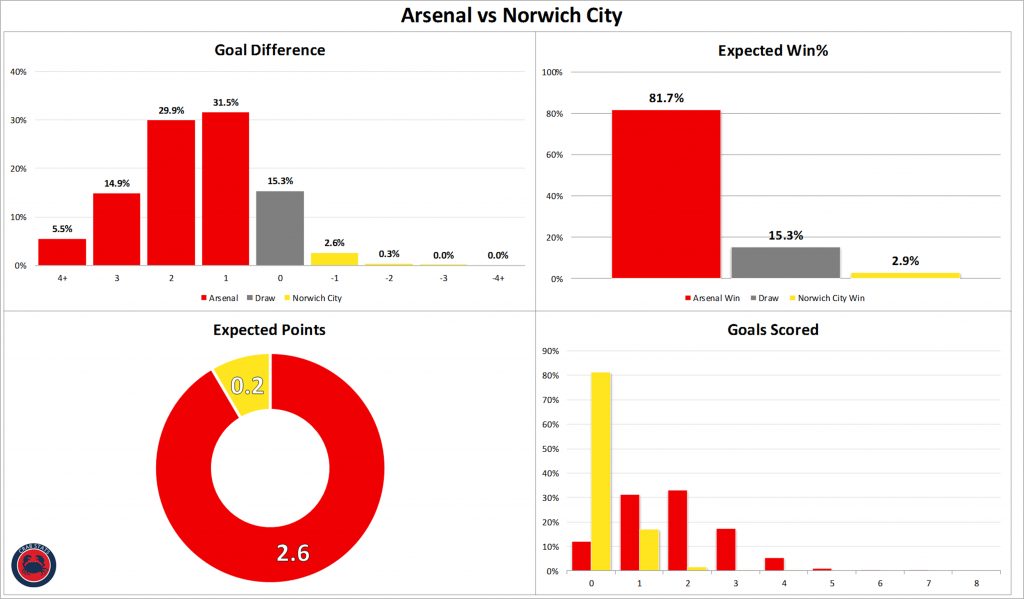 0 – Shots in Prime Allowed, tied for fewest allowed this season (the other was also against Norwich) by Arsenal

0.2 – xG allowed, the lowest allowed this season by Arsenal

7 – Touches in the box allowed, the fewest allowed this season by Arsenal

1 – Shot from a set piece allowed (direct free kick after a Mustafi special), tied for the 2nd fewest allowed (the fewest was 0 against Manchester City in the 3-0 that was done after about 20 minutes)

This was by far Arsenal’s best defensive showing this season. You can add an asterisk if you like because it was against the last place team but even with that Arsenal have really struggled to not allow teams to do better than their typical performances.

I think that this is clearly something that Mikel Arteta has been focused on, even if it meant that the attack suffered. Arsenal have looked better organized, the pressing has looked sharper and overall the system has made large improvements. Individual mistakes, red cards and injuries have masked the improvements but I do believe good things are happening.

7 – Passes completed into the final third, tied for first on Arsenal (with Granit Xhaka)

11 – Progressive passes completed, most for Arsenal

6 – Passes completed into the Penalty Arsenal, most for Arsenal

2 – Through balls completed, most for Arsenal

24 – Pressures, 2nd on Arsenal (behind Alexandre Lacazette who gets a lot of deserved crap but he ran his socks off yesterday). Of those 8 led to Arsenal regaining possession which led the team.

4 – Interceptions, most for Arsenal

61 – Targets (passed aimed to him), most for Arsenal

28 – Final third touches, most for Arsenal

2 – Dribbles completed, most for Arsenal

182 – Progressive distance carried, most for Arsenal

This is the kind of performance I had hoped Dani Ceballos could give Arsenal on a regular basis when they got him last summer, unfortunately they have been few and far between. In this match he was always available for teammates (you can that in his total targets) but more importantly when he received the ball you could see that his intent was to drive the ball forward. Too often this season the ball would come to Ceballos and then slow down, he would make some pretty touches, maybe even evade a defender but then the ball would end up sideways or going backwards. This match he was the driving force, especially in the first half, moving Arsenal forward.

I think that this was partially helped by the back 3 that Arteta implemented that freed both Granit Xhaka and Ceballos to push forward. This isn’t always possible when Arsenal use the 4-3-3/4-2-3-1 because in possession, Arteta seems to want 3 players back to keep the defensive protection. Often it is one of the midfielders that needs to drop back to make up the line of 3 while the full backs push forward.

Hopefully this is a sign of Arteta figuring out how to best use the midfield to support Arsenal’s attack.

Sources: Opta via whoscored and own database, StatsBomb via Fbref

I always enjoy your posts, so I don’t mean to be picky. But there’s a flaw in the logic about Ceballos being able to move up because it is a back three. Of course, when you have three centre halfs under Arteta’s system, both of the midfielders can move forward; when Arteta plays a back four, only two of the three can do so. But either way, two midfield players can play further up the pitch. The idea that a back three gives you a numerical attacking advantage is backward. It substitutes an (almost permanently defensive) third centre half for… Read more »

I would be interested to know, in a few games, how often we passed the ball backwards from the opposition half and then gave away possession nearer our goal…

Martin, did you watch your first Arsenal game?

It must be a miserable time for you with all this good news. Saka signing a new contract and a decisive victory. Still you will find something to moan about. ????

Thanks for the breakdown Scott. Definitely an improved performance. Idk if it’s an explicit instruction, but it seems that the midfield still chooses the safer pass out to the wing rather than the killer through ball, even when it’s on. I wonder if that’s because the wingbacks are high and they don’t want to risk a turnover/counterattack. If so, that’s too bad. As much as I like a Tierney/Saka to Pepe cut-back, Fabregassian through balls are the Arsenal way and I’d like to see more of them.

Ceballos and Granit have been good recently. Glad to hear that Torriera is coming back to provide cover too.

Thanks for the stats, Scott.