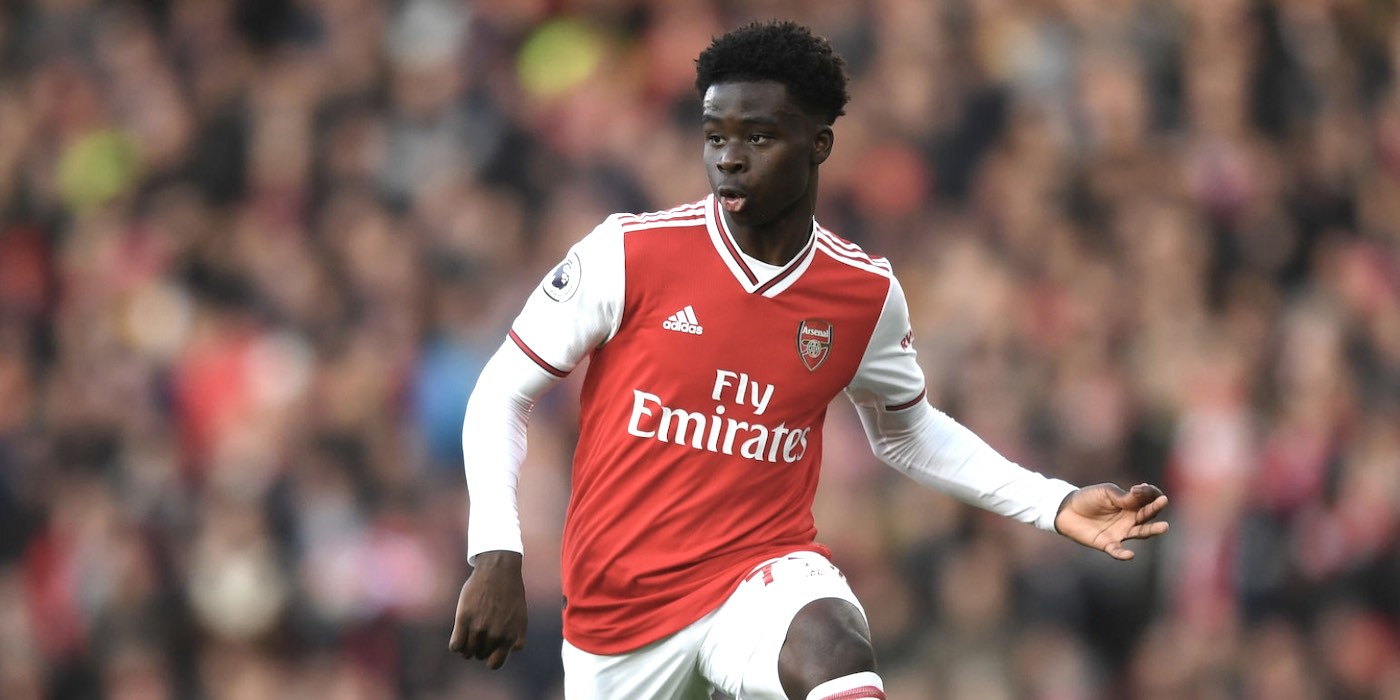 Left-back, wing-back, left-wing, right-wing, number 10 – Bukayo Saka has featured in a number of positions this season and excelled in them all.

Having inherited an injury-hit and unbalanced squad, the 18-year-old’s versatility has been a real plus for Mikel Arteta.

In the week it was confirmed the Academy graduate had signed a four-year deal at the Emirates, the Spaniard says he’s in no rush to pin a single position on the player. Quite the opposite in fact.

“[I see Bukayo] evolving, getting better and getting to understand different positions and finally we will fit him in one that gives the best,” he said ahead of Saturday’s trip to Wolves.

“At the moment, we need him to float a little bit because he gives us a lot of versatility to do different things, even with the same shape.

“He understands the positions really well, he picks the movements, the situations and when to use the spaces really, really quickly.

“He’s very intelligent and I think that’s a really good thing for his development to do that.”

With his star rising, it seems likely that England and Nigeria will go head-to-head for Saka’s services.

So far, the youngster has worn the Three Lions shirt up to under-19 level and Gareth Southgate may well want to bring him into the senior set-up as they gear up for the European Championships which will now be held next summer.

For the time being, Arteta says Saka should just keep his head down.

“He should look to keep performing likes he’s doing, keep training and improving and trying to be the best in training as he can be every day.

“If he does that, we know the potential that he has and things will come to him naturally.”

So happy we have signed him up. To be at the level he is at that age is incredible. He can (and probably will) get better, though even if he doesn’t he’ll still be great for us.

Nigeria will get him.

Yes. I hope he chooses Nigeria. He will be part of an emerging golden generation.

He’s already played for England U16s to U19s so I can’t see why he would choose Nigeria.

Saka could do the same too. Although I doubt he has any tangible ties to Nigeria.

Everything I see about the boys grit and attitude is Nigerian.

Maybe because the environment around the England national team looks and smells like an old, clogged, kerchankity toilet and the media would eat him alive…?

Mane doesn’t play for England. Nor does Salah. And many others. And yeah, Saka will be as good as either of them, just without the diving.

I would love to see Saka and Kanu playing together for Nigeria. Kanu is still only 29 years old.

Earnestly because of how I love him, I wouldn’t want him to suffer here. We have much confusion here.

He is good kid, but Lets not over-hype him like we did with wilshere…

I get your concern, but a lot of those players (Wilshere included) were horribly injured and their management wasn’t the best. Here’s hoping Saka can avoid those. We all remember that Wilshere game against Barca, that wasn’t hype. He was the real deal.

Wilshire was never overhyped as he was on the verge of being a world class player. He was England man of the match on seven successive occasions. However sadly his career was blighted by injuries. I do agree however we must keep a sense of perspective.

I hope we don’t sign anymore attacking players. Unless if one of Auba and Laca are going. Saka can play forward on the left wing, and we have Martineli as well as Nelson. Smith Rowe should stay next season and he also can play in those forward positions. Our focus need to be the midfield. If we get Partey and Coutinho we will have better options and give the midfield a good balance.

Agee. Though I’d like to see ESR as a no. 10.
Seems we need a good one and, ya know, that the manager will actually play.

I have to say I’m really excited about the prospect of ESR coming back and getting some game time, his skillset could definitely fill a hole in our midfield. People seem to forget that it was not long ago that he was THE shining light to be coming out of our academy and it’s just injuries that have hampered his progress. All the Huddersfield fans seem to love him and wax on about how good he’s been for them since his loan. To use a Wengerism I just hope we don’t make a signing that ‘kills’ him

Would be good if we can get coutinho on loan, and for farca to pay us 10 mil if he starts 1/3 of our matches.

Saka is an exceptional talent no doubt..but so also are the current crop of kids playing for the ist team now. When i watch them play, i just feel like a proud dad…reminds me of the Fabregas set of wonder kids that can play any team off the pitch. Our future looks very bright indeed….scary thing is there are even more of these talented kids in our academy, ready, waiting to break through.

Yes, so scary that sometimes I worry how the club management can accommodate them all (sporting wise) without losing some future potentials in the process. Thinking of the current Balogun scenerio.

Yeah, i agree…i worry too, especially with expert kid-nappers like Barcelona, Bayern etc. always lurking around

I could see Saka in Sterling yesterday. Relentless. He plays like he’s possessed

As long as he can stay fit, stay humble and stay committed, you’d have to be mad not to back him to become a real star. As others have said, so glad we tied him down to a contract.

It would be nice if Southgate actually takes notice of him and a couple of our other players, but he really seems to have an issue with arsenal

It will take time for the England team to become a true reflection of the best elligible players in the PL. Why? We all know that although the majority of the people just want the best players to play so England is winning again, but the “old” guard are still reeling under the dogmas and traditions taught to them even though some are really trying to lose them. They are still more concerned by who plays rather than by anything else.

Saka has to be aware that he is now a target for defenders and will have to be more aware of the unscruplous ones, we do not want any more “Eduardos” like incidents, and that goes for Martinelli too.
Football is dangerous.