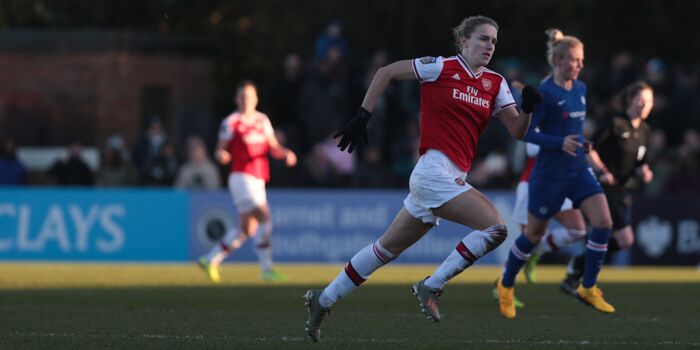 Miedema was confirmed as the Football Writers’ Player of the Year earlier this week. Viv is up against Guro Reiten and Beth England of Chelsea, Lauren Hemp of Manchester City and Chloe Kelly of Everton for the award.

An impressive season for these five #BarclaysFAWSL stars

Who will get your vote for @BarclaysFooty Player of the Season?

You can vote for Viv here. The form does appear to allow repeat voting and it would be a terrible shame if that was abused in any way…

I had to make sure that you really can vote twice… Couple of times. I hope I didn’t ruin the integrity of the vote now. But on serious note this list made me kind of sad. Not that I don’t agree that all those players were really good last season, but Arsenal fans thought that Leah was our best player last year. I think that Viv is one of the best and most talented players in the world, but last season Leah was our best player. In City’s case Hemp is very good, but Roebuck was heads and shoulders above… Read more »

Agreed. We have both said in the past Reiten’s contribution to Chelsea’s success has been seriously undervalued by most people and noted that Hemp and Kelly have had good seasons. Unfortunately, it will always be the goalscorers that attract the attention as that is the glamorous part of the game. If you score 6 and create another 4 goals in an 11-1 trouncing you win awards but if you are a solid defender or great goalkeeper and keep goals conceeded low you get overlooked. Beth England gained the plaudits for “winning” Chelsea the Conti Cup when we all know that… Read more »

Its the Arsenal
Reply to  Peter Story Teller

Agree with you absolutely. Viv got several of my votes 🙂 Me complaining has nothing to do with people voting. This is a popularity contest and should be. Even if I think that for the influence Roebuck or Reiten should have won it, I will still vote for Viv. I am a fan, support my own. And fans will always rate goalscorers highest. My problem is with people puting these lists together. Those five aren’t chosen by fans I assume. And my main problem is that womens game is all about narratives that are created by few and what assume… Read more »

Just give it to her now.

How can it be called abuse if the “Thank you for voting” screen has an actual button on it that basically invites you to vote again? It’s nice and quick, too; I took advantage of it about forty times in two minutes this morning. I think I’ll bookmark that page and go back there from time to time, while I’m waiting for something to finish. Should be good for a couple hundred votes today at least.

I too voted around 30 times. But now time is up could have voted more. Viv♥️♥️♥️

Just watched the outcome of this vote on the FA player, are they mad?