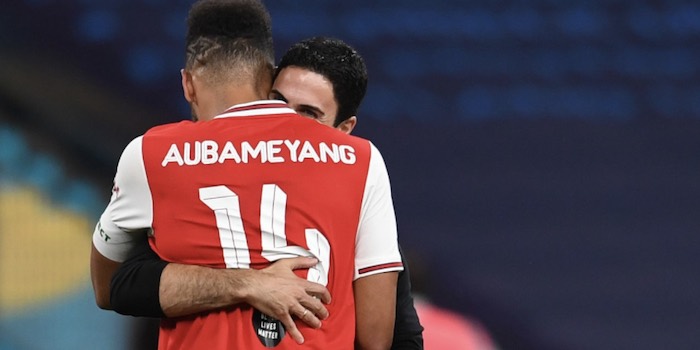 Mikel Arteta has reiterated his desire to keep Pierre-Emerick Aubameyang at the club, with a new contract, and has urged the club to make it happen as soon as possible.

The Arsenal boss is aware it’s not a simple scenario though – one which may not be fully resolved either way until it becomes clear if we’re playing in Europe next season.

“When I was talking about the uncertain things that we have on the table, obviously he’s one of them,” he said.

“There is another one obviously of where we are going to finish and whether we’re going to be playing in Europe or not, which is going to have an impact.

‘Then all these situations with the market, how it’s going to develop.

“With Auba, I think I’ve been very clear with what I want. The quicker we do it, for me personally, the better because the player will be more focused, more determined and more calm.

“But we have to respect the timings as well and the needs of the football club.”

The captain scored twice in the FA Cup semi-final against Man City, so his focus is pretty spot on.

It’s probably no coincidence that his fresh legs, having been rested for most of the Liverpool game, were a factor – particularly in the second goal. With another game tomorrow night, before the final day showdown with Watford and then Chelsea in the final, Arteta will likely be rotating again.

“We’ve been changing quite a lot in the last few games because the schedule that we had was pretty hectic and because everybody has been training so well and very involved,” he continued.

“They needed opportunities and they’re making me doubt all the time because they are performing well.”

Why do I feel like PEA would sign if we win the FA cup?
He’ll definitely be convinced Arteta has got the team playing in a way different and successful from his previous manager, coupled with the fact that Arteta is a young manager, fresh in the manager’s league looking to write his own name in the sands of time.
Let’s win the three games we have left, I know it’ll be a tough match but it’ll be more sweeter if we could humiliate Chelsea in the final

Beating Chelsh*t for the 3rd time in the FA cup final would definitely be a massive humiliation to them. Those two incredible goals from Ljumberg and Parlour they are in my mind as if it was yesterday. It will feel much sweeter than beating utd.

Given that Wolves will be on 59 points tonight, and Sp*rs on 58 playing Palace on the last day, our chances of finishing 7th look extremely slim. We have to smash Villa & Watford and get some help from Palace and Chelsea. It looks like Winning the FA cup is our only chance to qualify for Europe, so like you mention, PEA is waiting to see if we win the FA cup? Maybe the increase in his new deals depends on any income coming from Europe.

Actually, we only need help from EITHER Chel$ki OR Palace – not both. If we beat Villa (and we will), then we’re in eighth place. We only need to pass one of Spurms or Wolves. And I can’t see Wolves going to Skunkford Bridge and leaving with any points. We win both our games by two (a conservative figure), Wolves lose to Chel$ki, and we’re ahead of Wolves. If we tie them on goal difference, we’re ahead on goals scored … unless they lose to Chel$ki 6-8 or something ridiculous like that. So our fate is not entirely in our… Read more »

I was a bit disheartened yesterday after the Wolves win, but I am looking at the league standings now and it actually doesn’t look too bad. If Chelsea don’t win against Liverpool tomorrow, their CL spot is not secured at all. When their game starts tomorrow, it is very likely that United have beaten WHU and Chelsea find themselves in 4th place. If they don’t win tomorrow, they have either 1 or 2 points more than Leicester before the last game with a drastically worse goal difference. So they have to win against Wolves to definitely avoid being overtaken by… Read more »

Hhhmmm. I’m so up for Auba staying and I do have a lot of love for Laca. But do I really want to see Laca and Auba start next season as two of a three? Not really. I feel like we’ve seen it enough and to be totally frank, it hasn’t worked quite right for two seasons and three different managers. I dunno, love them both but I’m just not sure them both being here is going to propel us forward.

Though I think with a pre-season behind them, and Arteta having been able to have a good look at them, he will now be much better placed to know how to use Laca and Auba together.

I’m intrigued to see how Arteta plans to fill the front positions long term with a selection from Auba, Laca, Pepe, Martinelli and Nketiah.

Then of course there is the Ozil question, does he stay or does he go now?

I do think we will see some departures this summer, Guendouzi being one of them.

It’s also hard to swallow the finances too though. Laca is 29, Auba 31. This is the last window we are going to get any decent money for either of them. Auba has held has value a little as he’s still very much in his prime and Laca only really has two seasons left at the top level.

Theses boys cost a combined total of £100m+. I’m not sure we are a club who can offset that.

Auba down the middlle was never effective. Laca can hold up the ball and essentially play like a number 10 by dropping deep. I think the reason our attack looked a little imbalanced is not because we are playing Laca and Auba together but because we didn’t have a good number 10 to play behind our front 3 and transition through the middle. Ozil was supposed to play that role but never did. If we change our formation to 4 -3 -3 from 3 -5 – 2 with a better player than Ozil who can also press, the PAL attack… Read more »

N10
Reply to  VAR will solve the problem

Johnny 4 Hats
Reply to  VAR will solve the problem

Good comment. And I’m happy to be proved wrong on this! But it feels like we’ve been down this road, tried every variation and we’ve never quite got them playing together.

Maybe Arteta has the Midas touch and can find that balance. I’m not convinced that he will and I think, even if we keep Laca for another few years, we’ll see more and more of Eddie, thus squandering our only hope of getting some of the £50m back we paid for Alex.

The front three is always compromised with Aubameyang with Lacazette in the same lineup. I’d still prefer Saka, Auba, Pepe if he stays.

A pretty widely shared sentiment in these parts!

Suarez is too old for Barcelona now. The risk is from there. Benzema does not need to be replaced by his mentor-coach Zidane. Atletico may want to replace Diego Costa.

Me too. He just seems at home here

Even if he doesn’t sign we should keep him for another year and let him go on a free. His goals are vital right now and top goal scorers are thin on the ground everywhere.

I am not sure an unhappy player can score lot of goals. If he knows the jackpot is waiting for him the following season elsewhere then it will be ok. But if he has a feeling of missed opportunity to go to Barcelona for example, we cannot rely on him.

If he is waiting to join on a free, it is natural to take it a try not to get injured and play within himself. We should sign or sell.

It’s vital that we keep him. An FA Cup Final victory along with guaranteed European football next season will almost certainly keep him here. If not, I fear Arteta will have a massive job on his hands persuading the guy to stay. I hope we skin Chelsea alive at Wembley. We owe them big time for that Europa League Final, when we weren’t at our best – especially Ozil, who, I’ll readily admit, had an absolute stinker.

Probably he will wait to see what interest there is for his service in market from CL clubs. We are willing to meet his wages at250K (which is less than Ozil’s) but frankly if we are less sentimental and more sanguine, he is 31yrs and at this point of his career, he is more likely to go to a club where he can win the big prizes and get one final large pay out. So its out of our hands. winning FA cup and/or qualifying for europa may help somewhat but it will boil down to comparative offers and we… Read more »

For what it’s worth, I think it would be best to sell one of Lacazette or Aubameyang this summer from a financial point of view, but I can’t agree with this idea that they’re both done once they hit their 30s (or that Aubameyang will collapse any day now that he has). Here are the ages of the top scorers in each top 5 league: England: 33, Italy: 35, Spain 33, Germany 31, France: 21 (I would accept binning either for Mbappe, admittedly). Aubameyang has an unbelievable injury record and is still very much in his peak in terms of… Read more »