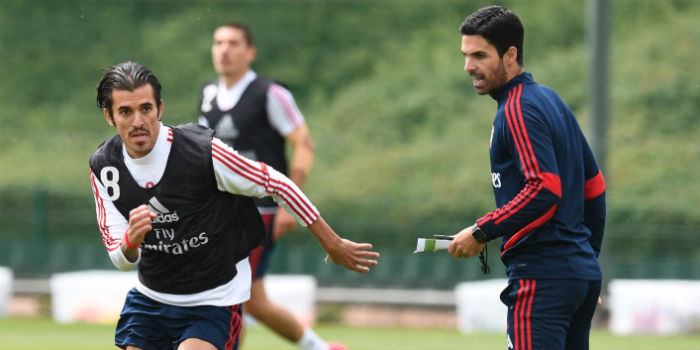 Mikel Arteta has hinted that a deal to keep Dani Ceballos past this season is not out of the question.

It’s not clear whether Arsenal wants to keep the Spain international on a permanent basis or just extend his loan from Real Madrid for another season. Pushing for either would represent quite a turnaround for the midfielder, who, after a rocky start, has clearly won over his boss.

Ahead of Tuesday’s game with Leicester, Arteta said: “I’m really happy with him and the way he’s evolving.

“I love how much he likes to play football; the passion that he puts in every training session and in every game, you have to see it.

“Whether he’s on the pitch or on the bench, the way he celebrates the goals, how much he puts in, he puts his life into it.

“I’m really happy with him. He’s evolving the right way and he’s becoming a really important player for us.”

After demonstrating flashes of his potential early in the season, it’s probably fair to say that Ceballos has struggled to consistently impose himself on matches.

That said, since lockdown restrictions ended, he’s gradually improved. He struggled against Manchester City and Brighton, looked decent against Southampton, Norwich and Wolves and bagged a winner off the bench at Sheffield United.

At a time when Xhaka, Torreira and Ozil have missed games due to injury and Matteo Guendouzi has been dropped, he’s been a steady presence. What he does between now and the end of the month could play a big part in Arteta’s thinking.

“Yeah, we are talking to the club [Real Madrid],” confirmed Arteta.

“Obviously, we don’t own the player, it’s not in our hands, so the clubs need to have communication and see what we can do.”

In a recent interview, Ceballos made it pretty clear that he doesn’t see himself playing for Real Madrid next season. While Valencia are known suitors and he’s also drawn to former club Real Betis, he did hint that a Premier League stay is not impossible. We’ll see…

Will Kia/Raul be blamed by arseblog if Arteta signs Ceballos permamently and he fails to perform?

Think he can only get better with experience from this decent. He’s being decent not as flashy as he first showed but bit of grit about him and decent. More confident he gets and grows into controlling tempo of a game he be a real solid type then.

I have been really impressed by Dani last few games, He almost has a touch of Santi in his play, get the ball in a tight area, turning and finding a good pass forward.

Where did you hear these rumours?

As much as a Chamakh shot on goal

You just broke the internet 👏👍

Doesn’t seem to offer the creativity we really need, and neither is he a top class defender, but he’s a decent all rounder who good technique, scraps well and has some game management/tactical intelligence Having a more dominant midfield partner ie Partey could free him to be more influential with the ball, but I don’t think he has it in him to be the midfield playmaker we badly need He reminds me quite a lot of Ander Herrera actually. Which is fine, every squad needs one or two, and much better someone like him than a total nothing like Elneny.… Read more »

Id much rather see AMN in the middle, the way he was in that match against man U and pogba…boy he was destined for big things in the centre of the park

I love him too but he sometimes looks possessed by or nervous about his own athleticism. He needs a calming hand. I think Arteta knows him from his time as a player so… am optimistic about his development.

If Arteta keeps playing 3-5-2 with wingback/winger triangles and bypassing the midfield, we might not miss him – or notice if he stays.

Other than Ozil, who is an empty uniform, he’s our only technically gifted midfielder. I’d be open for him to stay, perhaps on another loan. Meanwhile, we can look for a permanent solution.

I think we overlook how young he is, probably because of the Real Madrid label. He’s gonna be 24 next season, he can still improve a lot. He’s one year olden than Maitland-Niles… I think given our situation, we have to take low risk / high reward gambles when they present themselves. Signing Saka was one. Even if he doesn’t improve at all (very unlikely), we wouldn’t have lost a lot. The ideal scenario would be a loan with a an buying option. That way we don’t spend money on him and we have another year to see which version… Read more »

He really struggles away from home.

Good player. I’d like to see him take on players more when the chance is right, always doing it will ofc make him prone to injury like with Wilshere. It will be nice to see us going forward through centre mid more and not only making forward play through the wings. I rate him a bit for another loan, not up to him completely but just as a thought, if I were him I’d relish being coached by someone like Arteta even if for just a year

How much is he worth? Wasn’t there talk of £35 million earlier in the season? I would not pay over £20 million but if we can get him for that – or less – I’d do it.

Good move for Arsenal if he stays.

Based on his performances, he’s worth no more than 10 million.

If Zidane likes Guendouzi I’d personally swap him for Ceballos. I think Dani gets a tough time here because he was poor under Emery, but I can’t think of a player (particularly midfielders) who played well at that time. He then had a severe hamstring injury and has since come back and won Arteta over. Thing is I reckon he’s still improving and got a lot more to bring. Having watched him for Spain u21 he definitely has a pass in him that I think we are just starting to see. Also think we need to take the gamble and… Read more »

He definitely has potential but doesn’t he want a place at Madrid? Dani has always seemed to me someone who wants to make a case for folks back home. I’d not want him for two years in which he becomes Cesc-class and then feels the call of home.

I guess in that case I’d rather have him as a sellable asset rather than on loan. If he becomes Cesc class then we get adequately reimbursed.

If him becoming Cesc-class helps get us back into the CL or, god forbid, actually challenge for the title then I’m all for it.

“After demonstrating flashes of his potential early in the season, it’s probably fair to say that Ceballos has struggled to consistently impose himself on matches.”

I actually think this is incorrect, he played consistently well under Arteta before the lockdown, when he was able to get back into the team. He struggled under Emery, but so did most of our players. I wouldn’t be opposed to him staying, if we could find the right price. Has the clear potential to be a top player.

Ceballos has not been consistent, but as you say, neither has this team. We are finding some fight and form with Arteta now, and Ceballos has proven to be a significant part of that (his celebration of Saka’s goal against Wolves has me won over, completely!), but the article is not incorrect in its assessment of his performances for this club.