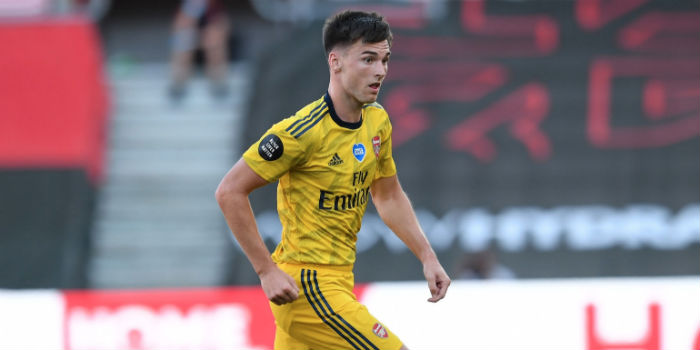 After Tuesday’s 1-1 draw with Leicester, Kieran Tierney was very open about how he’d benefitted from the Covid-19 lockdown claiming he now feels more settled in London and at Arsenal.

Fully fit after the dislocated shoulder suffered in December, he’s been a regular in Mikel Arteta’s starting line-ups since football returned and is showing the kind of form that persuaded us to part with big money last summer.

From the get-go, the 23-year-old’s attitude has impressed the boss who revealed he’s become a very popular member of the squad.

Speaking ahead of Sunday’s north London derby, Arteta said: “I’m very impressed with him. Since I joined even before he started to play games, just how he was acting and working on his rehab.

“Everybody loves him at the club, it’s not a coincidence. He earns that every single day, the way he treats people, the way he walks around the club, the energy he brings to the place.

“With his performances, I’m delighted. He’s adapted really, really well. He’s a player that gives you everything in every session, in every game and the quality that he is adding…he’s still so young and there are things to improve but he’s been a great addition to the team.”

He was also quick to shoot down suggestions the club were open to selling the player, nipping a question in the bud about January speculation before the journalist could even finish it.

“He is not going anywhere, I really like him,” was the curt response.

As someone who experienced switching Scottish football for the Premier League (via half a season with Real Sociedad), you sense Arteta is well attuned to Tierney’s situation.

“He had a really difficult period because of the injuries,” noted the boss. “He moved to a different city, a different context to that he had in Glasgow, a club that was winning all the time, he was very settled.

“It was a challenge for him and he’s been dealing with that in the best possible way. With some difficulties he needed the club to support him, he needed his teammates to make life easier for him.

“We’re all trying to help him, but you help him with pleasure because of what he brings and how willing he is to work, improve and give his maximum to the team.

He added: It is [a big transition Scotland to England] but he has adapted really, really well.

“Obviously, it’s a collective game and you need the right structure, the right people around you, the right players supporting you in his best position.

“We are learning as well where he feels more comfortable and how he can have a bigger impact on the team. It’s a process we’re in. He knew the league really well and he knew the differences, nobody had to explain that to him. He’s just experiencing everything and again, I’m delighted with him.”

A team full of tierney’s and deeney’s would hide their own cojones.

VAR will solve the problem
Reply to  goongot

I just read an article on him by Amy Lawrence on the Athletic. The tesco bag on his hand while he is walking into the stadium!…that is so refreshing to see! Nothing against a modern a day footballer. One should not be judged on the way one spends the money he earns. but to show humility even when in a postion of privilege is a true sign of a gentle heart. A future captain for sure if we can keep him injury free. I could just imagine him being a role model to the academy kids on how to keep… Read more »

Yeah and the interview he does with sky where he talks about how much waking up and playing football and training everyday is him living his dream. Great stuff!

Really glad he’s developing into the kind of player we all hoped Arsenal were getting. A great piece of transfer business (for a change) even if it looked a bit dodgy at the outset.

Tierney is turning out to be a fantastic acquisition. Coming through difficult circumstances to be one of the first names on our team sheet is testament both to his attitude and his skill. Hopefully he will play his best years in Arsenal red. I really do think he could captain the club some day in the future.

He’s fast become my favourite player. Always fully committed, great at the back and going forward, decent cross, down to earth and tucks his shirt in. Will quickly become a team leader and is a potential captain in a couple of years. More signings like him and we’ll close the gap pretty darn quickly.

I agree with you100%. Nothing else for me to add

Tucking his shirt in was the cherry on top for me. When you’re tucked, the opponent is fucked!

He’s rightly getting plenty of accolades but Bellerin also played very well last match despite yet to come back to his best. A number of excellent give and goes with Saka and passes.

Worth bearing that in mind before people get as per usual over carried away and wank off to one player out of proportion.

It’s me
Reply to  santori

Without getting personal Santori, that’s an absolutely bizarre comment…

Tierney was great buy, and if we can keep him injury free he will be a great addition to the first team. I watched the Sheff utd vs Chelsea, and I saw a lot of players with the attitude of Tierney in Sheff utd. I have been very impressed by them, and they have given every top team a real hard time this season. I think we should definetly try to sign one or two players from this team. They are organized, professional, play with no fear, and give 200%.

Some players you just like right off and Tierney for me is one of those…the skill set he brings to the team, the work rate, the end product, he has it all. He will go up and down that wing all day long for the team and whenever he is in the final 3rd?, he sure can be very dangerous..he can whip it in, thread it through or even dribble it in, he’s got the technical ability to do all that, and its beginning to look like, consistently too. Whats there not to like about the guy?.

TT (tesco Tierney) has all the makings of a future Arsenal great!