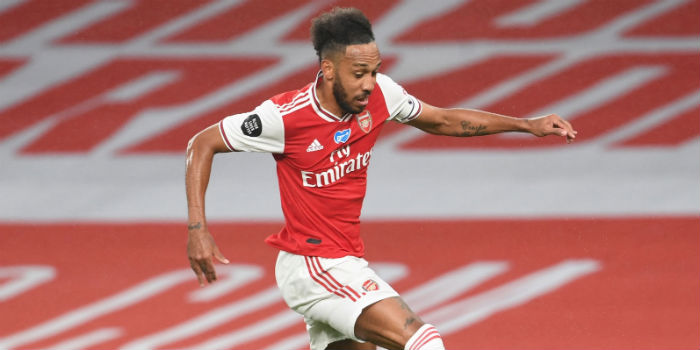 Eddie Nketiah’s straight red card against Leicester looks set to earn him a three-game ban that will rule him out of matches with Sp*rs, Liverpool and Manchester City in the next 10 days.

Having already lost Gabriel Martinelli to injury, Mikel Areta’s options up front are a little thin on the ground.

With Alex Lacazette’s form in front of goal patchy, there must be a temptation to play Pierre-Emerick Aubameyang through the centre with Bukayo Saka, Nicolas Pepe and Reiss Nelson providing options out wide.

After last night’s frustrating 1-1 draw, during which Auba took his tally for the season to 20 goals, the boss touched on solving Eddie’s untimely absence without upsetting the balance of his team.

He said: “I will look at the options that we have up front now and how we can be a little bit diverse and have different options but obviously we will wait and see the suspension for Eddie, how long it is, and we will adapt.

He added: “I don’t know [if Auba will play centrally], we need to try and put as much firepower in the team as possible without losing our balance.

“Auba is scoring a lot of goals coming from that position, he’s done it all his career. We know he can play as at nine but at the moment the balance of the team is a little bit better like this.”

Arteta also stressed that he doesn’t need to ask his captain to sacrifice his favourite position, rather the player is always willing to help his teammates by playing wherever necessary.

“He is a team player and you can ask him to play anywhere and he’s happy to take it, obviously he would prefer to play somewhere all the time but he is happy and you can see the effort that he puts in every game.”

Arsenal have the right to appeal Nketiah’s red card because the striker was initially shown a yellow card before Chris Kavanagh consulted the VAR monitor and upgraded it to a red.

We tried that after Aubameyang’s red card at Crystal Palace but to no avail.

I mean, if they are going to be asked to press then it’s necessary.

It’s not about attacking lessons. I used to play as a center forward and I would do this all the time. At that point, the only thing is your mind is that, “if I can pinch this ball, I’ll be through on goal.”. It doesn’t always come off, but in that split second, it’s an instinctive decision, and I can’t blame Eddy for that.

Surely Saka left, Auba central and Pepe right has to be worth a shot for Sunday? Although Saka and Bellerin were combining really well yesterday so I guess there’s a reluctance to break that up.
I thought Laca had some really good moments of hold-up play yesterday but we can’t afford to be missing the chances he’s missed the last few times he’s played (Wolves aside), so I’d bring him on for the final 10/15.

If he doesn’t want Auba central it might be worth trying Pepe there. He has a lot of the attributes (pace, dribbling, finishing) that might make him decent center forward.

Auba’s hold up play is poor

Such a shame. Nketiah’s challenge last night was a red by the letter of the law, but if that letter of the law is not applied consistently and Vardy remains on the pitch, the law becomes irrelevant and it is not a red card. Andy Townsend was wetting himself on air for the referee to get the red card out and yet said nothing when Vardy planted his studs in Mustafi’s face whilst watching the man. I find it disgusting that overpaid grown men are unable to put their bias aside for the good of the game for one moment… Read more »

Personally feel its not even about the sake of the game.

eddies challenge is a red because its dangerous, i.e could be harmful to the opposing player.

vardys challenge is not only dangerous but the danger is actually realised when you see mustafi’s face bleeding from stud wounds.

The issue is Vardy makes it look like he just accidentally catches Mustafi when he’s falling. I strongly suspect Vardy did it intentionally but it’s the type of “challenge” that most refs are going to view as accidental whereas Eddie comes in studs up and high from the front. That’s always going to be a red if they go to Var as it looks dangerous (leg breaker).

if you are falling, fine. If you swing your leg then it’s intentional. If you are falling your body goes naturally and you barely notice who you hit and where for a second or two. You just feel the contact. Vardy wanted his leg there and you can clearly see how he controls the force in the swing to reduce the impact and immediately after contact he’s already bringing out his hand to apologise. He meant what he did but you can clearly see he changed his mind in the action and the apology is genuine. Still a red card.… Read more »

I agree it’s almost assuredly intentional, but catching someone in the face while falling usually is going to get the benefit of the doubt. It’s similar to the guy who hurt Leno – that should be a card but when was the last time you saw that given in the PL? Add in Vardy is a former England international which seems to have an impact as well given some of the absolutely shocking challenges refs let them get away with. I remember one by Kane on sterling a few years ago where he dove into him studs up into Sterling’s… Read more »

But that’s the point of VAR. To catch these cheaters via video replays where it’s difficult to do it in real time. The inconsistency of var in epl is farcical.

That would be subjective judgement on Vardy/Eddie tho. V.s.r. good for the definitive did it touch arm, was he level or off side , was tackle inside or out of box , etc was it over line and 99.9 per cent I think var done this well

Nelson, Auba, Saka would be brilliant.

You know Strange, Pepe didn’t actually shit a child out his uterus himself

14 fouls Leicester ( not including vardy on Mustafi)
10 Arsenal
No cards Leicester…….
A yellow and a red for the Arse………hahahahaha

His name is Reiss Nelson

I can’t help but think back to Wenger saying that blooding young players in the PL costs a team points. I’m sure that Eddie will learn from this and improve.

My recollection is that he was specifically talking about centre halfs.

Auba Laca Pepe? Saka must surely be close to the red-zone after all the football last few weeks

I don’t understand the reluctance to use Pepe. Everytime he’s been involved in a game, he has come good. Had he got on yesterday instead of Willock on the wings he would have given the Leceister defence a lot to think about and they would have been pinned back instead of bombing forward. Arteta got it wrong yesterday. The points were ours for the taking. Pepe is being wasted.

I agree with you pepe have to play

Agreed. I feel that, going forward, you need to know that Pepe will be a good fit in the team. You’ve paid a big sum and still don’t seem confident. I like his play, but it will be hard to perform at top level if it’s only a here and there. Like Saka, he has some talents otherwise missing from the team.

I don’t blame the substitution, he needed willing runners and there was no way to know that Eddie would be redcarded. The match just felt like missed 3pts

I can agree with him. As mucha s he scores, Auba is very slack with possession. Like Pepe, he loses the ball way too often. No wonder Saka starts ahead of Pepe at the moment. BUT Auba simply does not compete for high balls or hold the ball enough for us. In that he is no where near TH14 who could carve and create opportunities on his own, beat 1 or 2 players with pace and skill. Auba still best running into the ball, you have to lay it in front of him. That’s not what you have luxury with… Read more »

Would go with Lacezette in middle v spuds