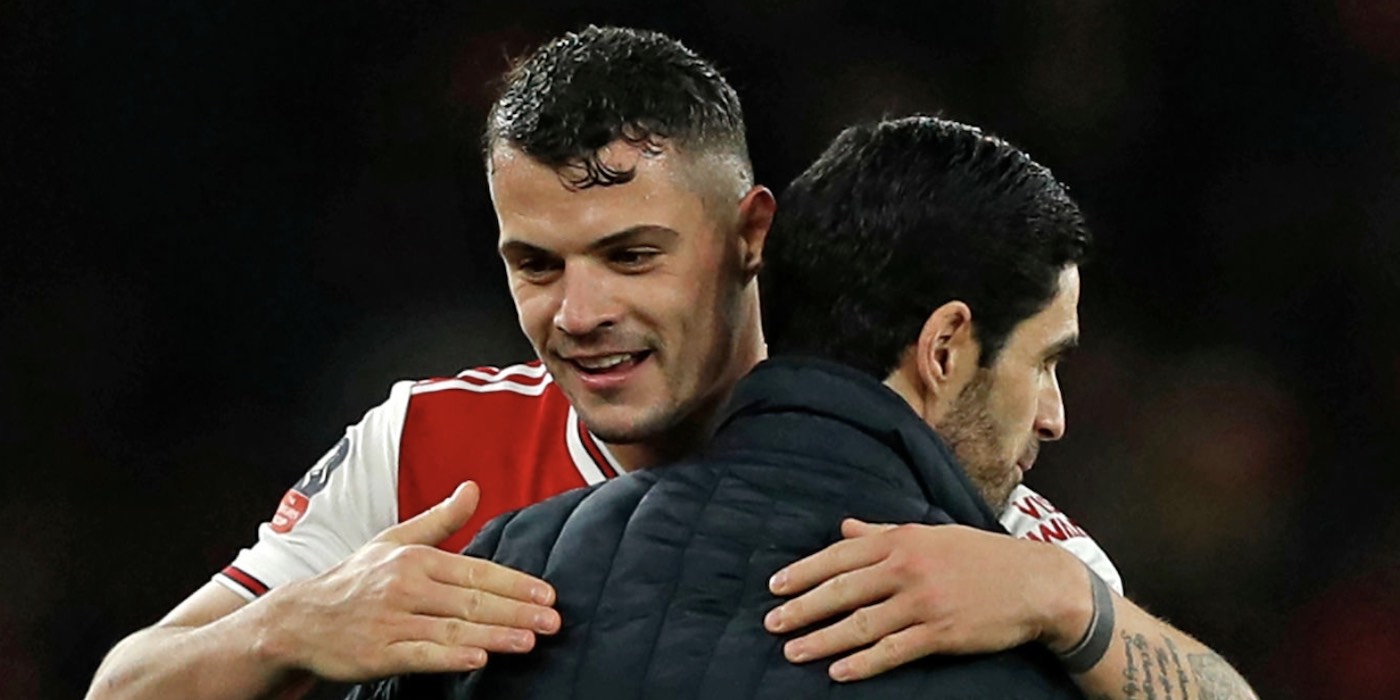 Mikel Arteta says Granit Xhaka is enjoying his football at Arsenal after working hard to win back the trust of fans with his performances on the pitch.

The Swiss international looked destined to leave the club when the transfer window opened in January. Stripped of the captaincy following an on-pitch strop during December’s game with Crystal Palace he was happy to be courted by Hertha Berlin with whom he agreed personal terms.

Against the odds, Mikel Arteta intervened to persuade the midfielder to stick out the season and since then the player has gone from strength to strength. While the 27-year-old still has his flaws, his work ethic served him well when times got tough.

Asked about Xhaka’s decent form and the journey he’s been on this year, Arteta said: “You probably know better than me what happened and how much it affected both sides when that issue occurred.

“When I arrived, I had a really high opinion of him, I knew him really well, I tried to convince him that he could have a place here, that he could enjoy his career, that his family could be happy here.

“He’s a player that when he commits he gives 100 per cent. He worked really hard, he won everybody’s trust again. He’s starting to enjoy it, you could see that and normally when you have those two aspects together that’s when players perform at the highest level.

He added: “I think for a football player when you feel the fans supporting you, you feel the love, the support, it’s an immense amount of drive and energy that produces.

“To be fair, since I joined I saw that [love] towards Granit. The atmosphere was completely different. They were clapping him, supporting him and they were good. Hopefully, he can enjoy that when supporters are back in the stadium.”

I fully understood what he did at the time. Fans abused of him and expected him to be nice to them in return.

And had just had a baby or was about to. I can imagine lack of sleep and a short fuse would be part of it

Emery completely let him down and then hung him out to dry for good measure, with his mindless ‘system’
I’ve never seen a player less suited to the role he was in. Covering 60 yards of grass all on his own while Torriera received crosses from Aubameyang in the box.
The fans anger, I firmly believe was directed at the coach’s continued use of him, not Xhaka himself.

Completely agree with this assessment.

I’ve seen so many people on twitter arguing for him to be the deepest lying midfielder next season. I don’t get it.
Do they not remember him playing in this position for Emery?It was an absolute disaster.
No protection for the defence, he’s just not physically capable.

He is a DLM thats what he is best at, that dont mean we cant have other midfielders in midfield. Our midfield under Emery and partially under Wenger too was a vacuum, empty space. That was not Xhaka’s fault it was the managers fault.

Xhaka being DLM dont mean we cant have a DM and a Playmaker or a box to box. And he is quite good defensibly working together with someone, but he is not a one man midfield.

I think the term ‘abuse’ is a bit strong. My memory of the game is that he was playing particularly badly and there were some cheers when he was hooked. I wouldn’t have expected him to take it well. But I would have expected a short apology after the game, and it could have been left there.

Online abuse previous to the match played a part as well. Internet abuse is quite real and prevalent.

Only if you read it. Players social media channels should be looked after by pr people. The comments are not always by Arsenal fans and many by teenagers who don’t understand the ramifications of their words.

Currently happening to Ozil on a massive scale by the way.

That’s a fair point. I don’t spend a huge amount of time looking at the online stuff but I can see how it could affect people. That said, as someone else mentioned, he does have the option to steer clear of those channels, or see them for what they are.

Nobody lives in a vacuum. No way could he be kept ignorant of the torrent of abuse aimed at him all over the internet.

Just need him to score the winning penalty in the final for the greatest redemption arc of all time.

Anonymarse
Reply to  I S

Yep, it’d be a good ending after his three goal line clearances that all lead to quick counter-attacking goals. Man of the Match, just edging out both of our hat-trick heroes.

One thing I’ve always admired about Liverpool is the way their fans/pundits always back their players 100%. They were calling Joe Allen the Welsh Xavi while we criticise every midfielder we ever sign for not being Vieira, and sadly I have started to wonder if there are players who have been helped by the lack of a crowd and negative feedback that has been a constant at every game I’ve been to in the last few years

Spot on. I think the difference between performing for a crowd and simply playing, is grossly underestimated. It’s only now that we can see that clearly in the context of football.

From a perspective of an abroad fan, i never felt this was backing up…more gallows humor. “Rob Hooolding yooou knoooow…..better than cannnaavarooo” backing up or gallows humor?! (i love rob btw)
theyve been a huge huge club for ages but didnt won anything in 2 decades?! honestly after 2 decades being shite you have to find a positive way to support your club + these guys who r still here r obvious not tourists andor bandwagons therfore that

I have no idea what you are talking about.

also, by the example of mancunited, i thought i saw the same….with a less postive impact. they had 5-6 golden boys since 2002 and its fair to say they didn’t had the succes the last years people expect. I don’t disagree with u at all but just think ist a small piece inna puzzle

Karius received so many death threats that he required police protection and was hounded out of the club.
They booed their team off many times before the Klopp era.
The club even had to put out a statement asking the fans not to.
Toxic fans can be found at every club.

You are damn right, bro. Bad decisions from referees, negative comments from pundits and ex-players… We let it happen year after year @@ Our PR/Communication team should do their job to protect the club and players from those unfair attacks.

Arsenal fans are the most toxic and unappreciative lot. I felt so ashamed, almost guilty of the way some fans treated Eboue, Ramsey, Xhaka, Mustafi and now Özil. No player ever deserves that kind of treatment from his own fans regardless his dip in form, and it doesn’t help to make him better. Some will splash the “highly paid” card but I say, what would you rather these lads do? Abstain from picking up their paycheck whenever they’re “not performing” to the expectations of their fans? Who does that?

Right. If you had a crap day at the office you’d expect your wages still. I would.

Honest question: are we?
i feel this is all the same with huge clubs in huge cities and especially social media where people feel forced to express their opinion in a very drastic matter just to be heard. i guess im living in my arsenal bubble and obv biased but its not exclusive an arsenal problem

dont wanna justify the abuse towards players in any way. i hate it, tbh

Thats nuce that he has the players trust but lets face it he is not good enough and needs to be replaced by someone like Partey.

Decent player but sell if we can find a wiling buyer.

He’s proved conclusively that he’s now a key player and is performing as well as he does for his country. To call him decent is insulting him.

a key player in a team sitting tenth in the league. wow. If you watch him during the game he does very little. the amount of praise some of these average players are getting since arteta came in is riduclous. shows have far standards have fallen.

jimbo, it’s not all on him. If you watch any player through a game most of what they do is just run around a bit.

Check out 7amkickoff’s recent article on him.

fact remains since we bought him, we arent a champions league team.
if fans are happy with him, then we should be happy to be an europa league team.

So now everyone is cheering him but at the time it was all knives out. Booing your own player as he leaves the pitch is bullshit and he was right to tell those who did it as well as the pricks who’d posted abuse online to stick it. He had nothing to apologise for.

I’m glad he’s come through his bad spell and has become a useful player to us. Long may it coninue.

Seems to be not a popular opinion but I’d like to replace him this summer. Despite putting in a lot of effort he’s just too limited. His immobility means another midfielder is required to sit with him and avoid him getting exposed, this leaves us short in attack. He also can’t carry the ball and takes too long to play his passes which means we often don’t exploit opportunities we could. Be nice for him to go to a slower league and we get in a more athletic replacement. I can’t see it happening though as Arteta seems to like… Read more »

It’s actually a good thing to have more than one midfielder on the pitch at the same time. Very few of them can win a game single-handed.

Sit with him. As opposed to having the freedom to get forward, contribute to the attack and influence the game.
Proper DMs have the athleticism and reading of the game to sit back by themselves

Kudos to the player and the manager. Time to let bygones be bygones and move onwards – and, where the Premiership table is concerned, upwards.