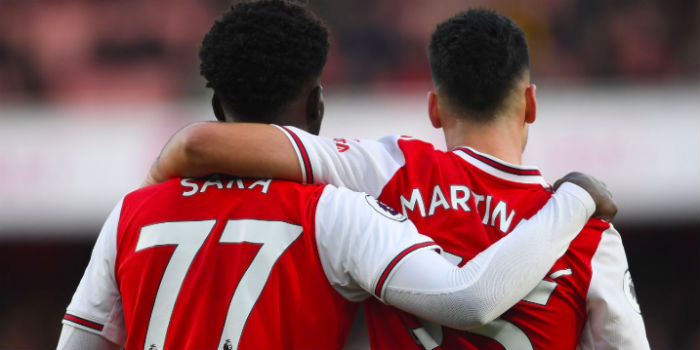 Arsenal forward Gabriel Martinelli has signed a new long-term contract with the club, Arsenal confirmed today. The announcement comes just 48 hours after the Gunners managed to tie down Bukayo Saka to a new four-year deal.

Martinelli’s contract is recognition for an excellent debut season in England after joining from São Paulo minnows Ituano last summer. The 19-year old has bagged 10 goals in 26 appearances in this campaign. His season has ended on a bitter note with a knee injury now ruling him out for some months, but the layoff appears to have given the player more time to settle his future.

Head coach Mikel Arteta told Arsenal.com: “I am very happy that Gabi has signed a new contract with us. He is a very talented young player and he has impressed us with his performances, attitude and work-rate. We are looking forward to getting him back to full fitness and to watching his development at our club.” Reports suggest this is a four-year deal with an option for the club to extend.

Everybody knows that Arsenal are in need of a rebuild and Martinelli and Saka are the poster boys for how this team might look in the years to come, so needless to say, it’s a relief to have them both commit to the club.

Get in! This is so exciting.

Give it to him Ozil Will pay it forward ?

Great news at securing the future of our club!

Out of curiosity – Does anyone know how much Martinelli and Saka are earning on their new salaries? Would appreciate it if anyone could shed some light on the matter. Thanks in advance 🙂

Give Leno and auba new deals and we re good for now.

I’m not anti contracts, but isn’t Arteta a bit new to the game to be putting out hits on people?

I’d say the best, think he’ll be better than Saka but both are amazing talents.finally something to make us look forward with real hope

‘Better’ because the higher goal scorer gets the balon d or

I agree, the left foot of Glen Helder…think they both will be great…but Martinelli will be a world beater.

Seems the penny has finally dropped for the football executive team. Now let’s go all out on Auba

You could have stopped at “shitty iPhone”

Wow! Great news! Now we can boast of four strikers (martinelli, nketia, lacazete, auba). No team in England can contest this with our dear team

I wouldn’t hold your breath with laca

I think Lacazette will be gone at the end of the season. I just don’t see it ever working with both him and Auba in the side. Let’s somehow offload Ozil and build the attack around Auba, Martinelli, Nketiah and Sako.

Fair enough.
Citeh and fuckerspool have better structure, organization, and actual functioning midfields that all make their attacker’s lives easier. (took both sides 2+ seasons to get their collective shit together, mind.)

Like when we had Vieira; Fabregas; Cazorla; Rosicky; Bergkamp; Wilshere. Ramsey isn’t these fellas’ class, but pretty close.

Our attackers are pretty much on their own. Considering that, they do quite well.

You haven’t see Man City’s forward line of late then!

Some humble pie for arseblog. He needs give Don Raul and Fahmi some credit!

Talented or not, upping the wages of two under-20 players is hardly something to write home about. Credit will come if we see long term results

Let’s get new contracts for ElNeny, Mikhi, and Socrates, and then I think we are set ?

Fantastic news! Hopefully this is just the start, and we’re working on all the other contracts that are entering their final one or two years. Start with tying up Auba for the rest of his career, then decide sign or sell on the rest. UP THE ARSENAL!

Martinelli will be a success if played as false 9, He is like fox in the box.
?

That goal and celebration against chelsea, my moment of the season. Looking forward to more of that in the future

Good to see Raul and the rest of the executive team doing well.

Hopefully Arseblog will recognise this and lay off their unjustified criticisms for once.

You want people like Sir Andrew on your board; deep skeptic .

Or put him out to stud with the Arsenal ladies, 20 years from now we would have a squad of Martinellis Artificial insemination is probably the way to go so it doesn’t affect his game and can social distance.

what a beautiful, charming and innovative idea that is.

Google Thomas Partey?,
It says he plays as defensive midfielder for football club Arsenal and Ghana?

Great move by the club to help Gabi through a terribly untimely injury.

what was his contract’s duration before? when you sign a 17 year-old with aims for the first team, you’d think it would already be a 4-5 year contract…

looked it up, he was already on a 5 year contract, so they probably just renegotiated his wages, that were reportedly 20k a week (and that was before they accepted the pay cut). good news nonetheless

I think it’s another 5 year deal.

So an extension of one year?

I think being pre-emptive with pay rises is a smart move. It makes players feel valued and it is usually cost effective as players will typically demand more if they ask for a rise. Glad he is tied down for the foreseeable.

Great news…… his recent injury was such a blow for Arsenal.
I’d love to have seen him in these closing games.

Yesss. Fantastic news. Raul Edu Vin are doing a great job.
Some people are just to impatient and draw conclusions. Have some faith!

Wahoo! Getting closer, Gunners, to a better place from now! UCL football next year

Let’s hold our horses shall we?

This guy gives me the chills

Joined up thinking starting to prevail, would like to see our wage bill go down by offloading mustafi and you know who and also what’s his name at the back ? curly bloke ..oh yeh we gave him another year..

Fantastic !! can anyone tell what’s the duration ?

Absolutley buzzing for these two

I love Saka but this player is just something else. Good years ahead!! Get well soon mate.

Luiz might of helped in this. Fellow country man and i understand that he is a positive influence. Martinelli is still a teenager and I’m sure Luiz has helped him settle in London.

Out of the blue more good news! They will need experienced, high quality players around them but Gabi, Saka, Eddie and Saliba are the kind of players I can get behind. John-Jules and Smith-Rowe may also be the real deal. All have a really good athletic profile and work rate to go with their technical ability. I hope we can get a few more like them and really build something special

Just that Goal against Chelsea, 10 man down, with that sprint and the priceless look on the face of Kante whiles falling…I would pay the man for life even if he doesnt kick the football again…#Priceless

That goal at the bridge was amazing! He had me at his signing though, he turned up in a suit, not jeans, not sweat pants, a suit! For a teenage that spelled professional for me and gave an insight on how he handles his game. Then there was Watford away, our last remaining sub was used on Nelson and I remember Gabi’s face, it had that jealous, envious look about it, more like saying “it should have been me”. Then came THAT header against standard leige( how did he do that?That goal deserves more credit than it gets!) Don’t even… Read more »