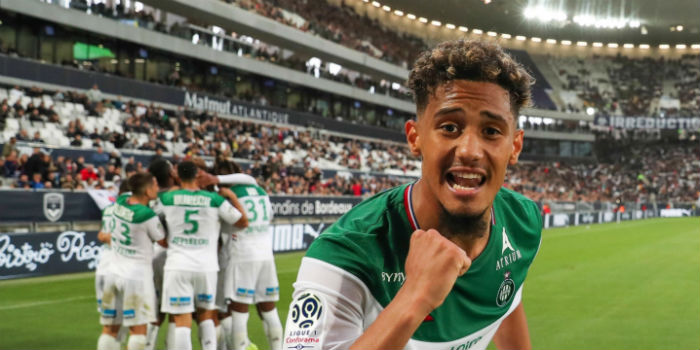 Mikel Arteta is wary of the hype surrounding William Saliba given the injury problems the 19-year-old defender has had to contend with this season.

Arsenal spent the best part of £27 million recruiting the France under-20 international from Saint-Etienne before loaning him back to the Ligue 1 side who, under financial incentive, promised to give him as much game time as possible.

Over the course of the year, his legend has grown despite being restricted to 16 starts out of a possible

He missed the opening seven games of the league season with a hamstring problem, played five on the bounce and was then ruled out for another nine with a fractured metatarsal.

While attention has focused on him helping Les Verts to the Coupe de France final – which he may or may not play in – less has been written about him marshalling the defence of a side that failed to win any of their final seven games before the campaign was prematurely curtailed due to Covid-19.

Ahead of Saturday’s trip to Wolves, the boss was asked about the prospect of working with Saliba.

“I am excited to work with him but I am worried about the expectations because I know how difficult it is to play as a central defender in this country,” he told Sky Sports.

“It is one of the most complicated positions here. The step is really, really big. William had a really positive season last year, but he has had a really difficult one this year with injuries. We know where the potential is, but to fulfil that potential every three days at the highest level is a different task.”

Saliba has already met with Arteta and his new teammates when he visited London Colney for rehab and medical assessments. Now he has to prove himself.

“He is, in my opinion, in phase one or two of his development,” says Arteta.

“He has a lot of things to learn but hopefully, we can give him the right environment to make that process very quick.

“I know the player. He has the right mentality, the right attitude, the right physique. But he needs to fit in and that’s something nobody knows until the moment he lands in that dressing room.”

Arteta basically always says the right things, and so far he backs them too. Absolutely looking positively towards the future under his leadership. Saliba should be given space to grow, he will make mistakes offcourse but he clearly has potential for greatness

Absolutely agree about Arteta always saying the right things. Although Arsene was always a pleasure to listen to, regardless the topic, his press conferences over his last years have become a juxtaposition of phrases. Emery was everything but a pleasure to listen to. Because of the language barrier but also because he just said a lot of strange things. Freddie speaks very well but as it was always clear that he’s not the guy the club will go for, you didn’t expect him to talk about the process or the future. But Mik can make you really excited again just… Read more »

This, I find his balance of effective challenging, honesty and also praise a really good balance.

Thank you Arteta for bringing us down to earth.

God is a Gooner
Reply to  Espen

Espen
Reply to  God is a Gooner

I see what you did there. Masterclass ?

Can anyone name a 19-yr old player who moved to the Premier League and became an instant success for a top team straightaway?

All I’ve got is Nicolas Anelka

How about Fabregas? I’m sure there must be a few with other clubs.

Fabregas didn’t move from Spain to PL. He moved to the academy like Bellerin and many other youngsters.

Every single 16-18yr old I buy in Fifa turns into a superstar within one season, so my expectations are realistic. 🙂

Patrick was 20 approaching 21 when he joined us

Wasnt a superstar straight away took Ronaldo about 3 of years. Ashley Cole had him in his pocket for a while

Are we still a top team? ? therefore he shd do well for us!

I wouldn’t be surprised if Saliba has injury problems like Tierney had when we bought him. Both young players overworked in teams that needed to play them all the time. He’ll need time to get properly fit and settle in but hopefully he’ll be worth the wait.

I get your point, but Celtic didn’t need Tierney to play all the time at all. They won the league at a canter every year he played. He just played because he’s got incredible natural fitness and was probably Celtic’s best player over the period.

“He is in phase 1 or 2 of his development” . How many phases is there? What are those phases? Thanks

Yeah I’m intrigued by this phase system now.. I mean if there’s 10 phases shit. But if there’s 3, happy days

I think he did mention 3 phases. First few years of managing to break into the first team, learning what top flight football is all about and peak/culmination phase? (he didn’t elaborate on the last one)

I remember Lucas Perez… The less he played the better he got. People were on here outraged when he didn’t start. Turns out he was bang average.
Given the recent state of our centrebacks it’s tempting to assume he must be the defensive messiah. Just hope he can develop into a decent, reliable and injury free player.

In the 21 games he played for us, Lucas Perez scored 7 goals and assisted 5. I’d say that’s a decent return. I agree that we did overhype him a little, but there was a good player there somewhere who wasn’t given enough chances.

He actually only started in 9 of those matches and even scored a hat trick in the Champions League and had 7 assists too. I always wondered why Wenger never gave him more chances

Soyuncu was linked to a lot of clubs including Arsenal before he finally signed for Leicester and it took him a year to fully adapt, but now he looks quality. Kudos to Leicester for giving him the time to settle and adapt to the Premier League. Saliba has all the attributes to be a top defender in England, he is physically imposing, he’s quick for a big guy, technically sound and he speaks fluent English. Just give him some time to settle and he’ll be just the ticket…