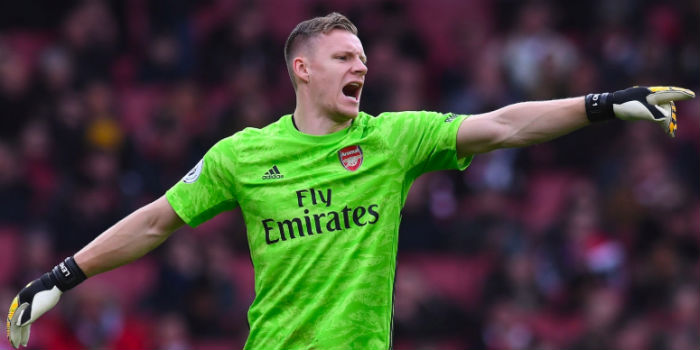 Arsenal have revealed that Bernd Leno will return to full training in the next few weeks and could be available for selection before the end of the season.

Arsenal’s final league game of the season is on Sunday 26 July. If we beat Manchester City in the FA Cup semi-final, we’d also have a trip to Wembley on the following weekend.

There were fears Leno could be facing a long spell on the sidelines when he injured his knee. Should he recover as planned, it will have been less than six weeks.

Elsewhere, it looks as though the appeal we lodged against Eddie Nketiah’s red card has failed. The England under-21 international was given his marching orders during the 1-1 draw with Leicester following a VAR review.

Having originally been given a yellow card by Chris Kavanagh we had the right to get a third opinion. The FA are standing by the decision which means Eddie will miss the games with Sp*rs, Liverpool and City.

We know Gabriel Martinelli and Pablo Mari will miss the rest of the season with knee and ankle problems respectively. No date has been set for the Brazilian’s return – a bit of a worry – but today we learnt that the Spanish defender is aiming for full fitness by September. That’s more positive than expected.

The way things are going, he could be back before Matteo Guendouzi and Mesut Ozil. The Frenchman continues to train away from the first team for disciplinary problems.

We’re not really sure what Mesut is up to. His back problems continue.

Guendouzi season over after he suffers metatarsal fracture

Tarkowski put his spikes into the side of Yarmolenko’s knee the other day and didn’t come close to getting the ball. Yarmolenko was down for a few minutes and Tarkowski only got a yellow… no VAR review at all. Commentators on the US feed compared it to Nketiah’s. It looked much worse than Nketiah’s. The inconsistency is impressive.

Or each club have a VAR representative

Only consistency is we’re always at the receiving end.

I with how well Emi has done l suspect Leno will have a fight on his hands for his spot!

Competition for places n as many positions as possible is what we need. Excellent stuff

Good news about Mari–that could mean he’ll be fit for the start of next season. Kolasinac has been solid enough in his own weird way lately, and I’d like to see Holding get a chance still, but I do think Mari could be quite good on the left side of the back three, presuming we persist with that next season.

Gutted for Eddie.. he fits Arteta’s pressing game very well. And in typical Arsenal-Fashion he’s out for our most crucial games of the season.

Laca and Pepe must step up in his abscence.

Some good might actually come from this particular event, there was a proper uproar, plus it cost us (and will probably cost us over the next few) and I hope a ref probably has to think twice next time before fucking us over so casually .

Unfortunately the bloke that just fucked over Sp*rs from the VAR booth is going to be ref’ing the match on Sunday and Mourinho has had a moan about it.

French journal gave inside details about Douzie’s problems. Mainly, Arteta and above

Sorry I was saying, mainly Arteta and his bosses met with Matteo but he did not want to apologize for his behavior and wouldn’t even listen to advice from wise man Luis. He also arrives late at training (first time I heard this).
Personally, I do not think his behavior against Brighton was a problem. They are adversaries. Will they ban fans from Emirates because we do not show due respect to Spurs? In the absence of Guendouzi, who is going to grab Dele Alli by the neck on sunday?

This might be unfair given I’ve never met him but I’ve personally never warmed to Guendouzi because his shows of ‘passion’ only seem to be driven by arrogance and the need to defend himself rather than his teammates or the club. His awful attitude towards Arteta has rather confirmed this for me. And giving shit to a Brighton player about how much money he earns does absolutely not make him some sort of warrior for the cause, just a bit of a twat. Still think £30m or so is gettable and it would be a great bit of business. Even… Read more »

I’d much prefer a midfielder to play a game winning pass or make a goal saving tackle than grab a player by the neck.

The guys obviously a prick and a liability, and to be frank, I don’t see enough talent to warrant the behaviour.

Wasn’t optimistic about Eddie’s red card being rescinded – all the rest is good news! (Well, with the exception of Özil but I’ve pretty much given up on him at this point – he seems content to take the money and swing lead)

I can buy him getting a red card for the challenge, but a three game ban is ludicrous really. The rules are what they are, but it strikes me as so absurd in this context. It should be reserved for obvious malicious intent, which was definitively not the case. FA should be able to recognize that.

The FA also needs to recognize that they cannot get every decision right even with a ref + VAR, because the standard of refereeing in the Prem is not even close to good enough.

Leicester having Vardy available for these next few games could be the difference between them making CL or not. Yes you can’t referee a game twice, but you also shouldn’t damage the league’s competitive integrity, esp during the crucial run-in.

Remember that time when they disallowed sokratis’s goal because of a foul that didnt even exist and they sort of admitted their wrong doings but no further action afyer that? Really stupid, looks like VAR has bring more malice than not

Didn’t Son get his suspension from that tackle that snapped that bloke’s ankle rescinded? Or do I have that wrong. If he did… so ridiculously inconsistent

Emi has done well and should keep his place unless he messes up, Leno should not step straight back into the team.

At least for the first time in ages, we have 2 keepers who we feel safe with in goal. Not so many years ago we had no faith in our first choice keeper, so this is a big turnaround

Timorous Me
Reply to  Vonnie

Not that I’m advocating for it, but what number do you think it would take for Raul & Co. to say yes to a transfer bid for Martinez this summer? It seems a replacement deputy keeper would need to be brought in then, which would cost something, so I just don’t know what number would be worth it.

Though if a chance to be a starting keeper is something Emi himself wants to leave for, I don’t know if we should stand in his way, either. I guess this is why Raul gets paid the big bucks.

AussieGooner
Reply to  Timorous Me

He would get more money that’s for sure, I feel rather comfortable about Emi in goal to be honest.

?
Plus he’s the oldest guy at like the entire club

Artetas Assistant
Reply to  Timorous Me

65 Million, and still insist on a buyback clause ?

75 Million plus first option to buy him back in three seasons for 60 Million.

Hahahaha…………….the appeal to the FA over Eddie is just brilliant.
We’re the joint highest Red card recipients in the league and actually are the highest in Yellows.
Dirty dirty dirty Arsenal……shame on you.

I think you’re being sarcastic.
If not, then you’re being incredibly ironic; this just goes to show the inconsistencies and bias refereeing done against us

Pakgooner……. I appreciate your “getting” my sarcasm!!!

VAR will rein football in England because of imbalances in decisions.

We can manage eddie’s suspension.
Laca can play up top, or we can put auba up top with saka and pepe flanking him. Not to mention nelson if required though not fantastjic