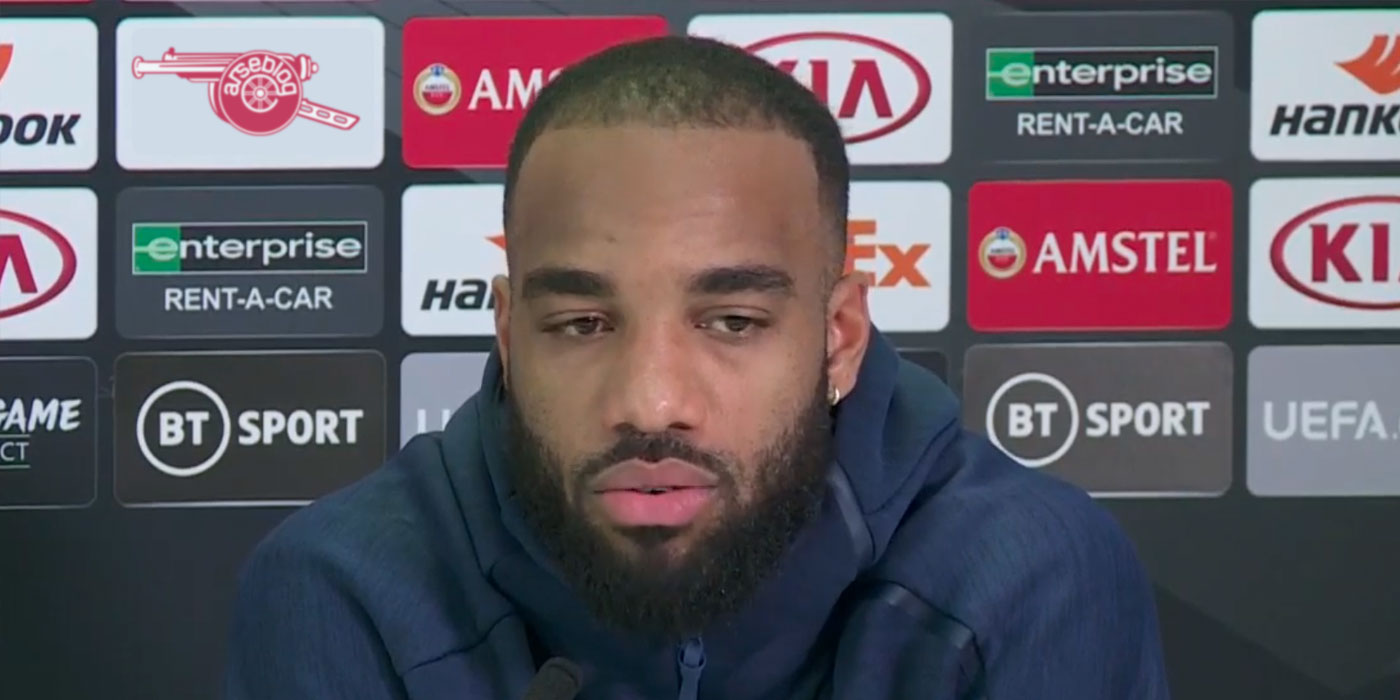 L’Equipe report that Atletico Madrid, Inter Milan and Juventus have made contact with Alexandre Lacazette over a possible move when the transfer window opens again.

The 29 year old notched his first goal since the restart in the 2-0 win over Wolves on Saturday, but in recent months has found himself slightly marginalised by Mikel Arteta.

The late strike at Molineux brought him into double figures for the season, he now has 10 in all competitions, level with with Gabriel Martinelli.

The report states both sides would be interested in a player swap deal, with Arsenal’s interest in midfielder Thomas Partey making it easy to connect those particular dots. The Frenchman was all set to join Diego Simeone’s side but a transfer ban for the La Liga outfit scuppered the deal and paved the way for his move to North London.

The Gunners also have a long-standing interest in Juve’s French midfielder Adrian Rabiot, so he could be a potential makeweight in any deal.

Lacazette has two years remaining on his current contract, and when asked if the club were going to offer him new terms, Mikel Arteta was somewhat circumspect.

“We have to have a chat about the next step with him and get his ideas and his feelings,” said the Arsenal boss.

“Let’s see. Now we are in a crucial moment [of the season]. It’s not time to talk about a lot of contract situations.

“We still have time and we will do it in the right moment.”

It’s believed Arsenal would be willing to part ways with the £50m signing from Lyon, with Arteta keen to unlock the potential of Martinelli and Eddie Nketiah.

Arteta’s comments are certainly not as definitive as those made about captain Pierre-Emerick Aubameyang, who he clearly wants to stay at the club, and the Spaniard is open to the idea of doing swap deals in the current Covid climate.

“We don’t know how the market is going to be,” he said.

“Obviously we are putting different plans together to see what we are going to be able to do. At the moment the uncertainty is still big as well, the way we are going to finish the season will dictate a lot of things financially as well so we have to be a bit patient and see what happens.”

I don’t think getting rid of one young, tantrum-prone French midfielder and replacing them with another makes too much sense tbh.

Douzie is the only warrior in the team. There is nobody else. We need to keep him, period.

Who else is tough, a true warrior, you have a name?

I like him but his attitude needs to change. Having seen how Arteta turned / improved Xhaka, Ceballos, Mustafi, AMN and Luiz, etc…. I hope he can do wonders to this kid, this teenage kid who needs a bit (maybe more) teaching! He will come good!

Lacazette for Party-Partey would be interesting.
Guendouzi for Rabiot would be better, some kind of Swap-A-Twat deal.

Rabiot apparently has discipline issues too, hence not too sure about him.

Yeah, that was really my point 😉

We all loved Koscielny for his discipline but the way he left Arsenal was similar to Rabiot vs PSG. Even his attitude towards the French national team was similar to Rabiot. I am not saying I want Rabiot.
We need a couple of players who are ready to fight back when the team is being bullied.

What about Guendouzi for Ramsey?

I thought we’d finally sent out most of our injury prone players. Ramsey on big money, over 30 and still missing a lot of this season?

Not too keen on Rabiot if he’s going to disrupt the squad.

How does it feel being the first person ever to say swap-a-twat in the two thousand years plus of earths history ? 🏆

Didn’t Gunnersaurus say it to T-rex?

There weren’t deals back then, you just clobbered a guy with a bone for whatever you wanted

Auba also had some issues at Borussia during his last couple of years there. Tantrums are just temporary

Auba’s disciplinary issues at Dortmund was never about tantrums or disruptive behaviour though. He kept his own time and tended to be late for training which led to him being disciplined. Or so the official line was anyway.

I love Laca as a player and as a person to have around the club, he’s especially good at making the younger players feel part of the team. I would miss him but it’s evident his form has dropped significantly. Given his age, his lack of form and the money we could get for him at a time we really need funds I think it’s a no brainer, especially if we can do a swap deal for Partey.

Highly likely as Atleti in a financial quagmire, they would be inclined to swap. Would be win win for both parties but personally I would hate to see Laca leave 🙁

If we swap Laca for Rabiot it will just be another Mateo in our ranks.. Rabiot has not been good enough.

Partey is more proven and has played CL with Atletico for many years now..

I wish we kept Ramsey. A goalscoring midfielder who gives everything for the club.

PS. Instead of buying a new CM, maybe Joe Willock could get a chance. He scores or assist in almost every game. It’s worth a shot.

Scores or assists in almost every game 🤦🏽‍♂️ I’ll have a pint of whatever you are taking mate. He has a lot to learn still..

Hehe, I didn’t mean in every game. I’m just impressed by him in an offensive sense.

Whilst I’m impressed with him recently and agree that he adds a better offensive output than most of our midfielders, I often find Joe goes missing when he starts games, especially against better opposition. Hes good when hes got space and running at tired legs when he comes on as a sub but if he gets pressed I never quite feel like he has the technique to operate in tighter spaces. I’m hoping he can develop that but for the moment I wouldn’t be comfortable banking a CM spot on him

Yes, I agree. Maybe he needs a season on loan.
Like Smith-Rowe at Hudderfields Town. Work on his awareness on the field, as well as his technical ability.

Oh yeah we have ESR as well for next season 😀

I like him though he’s still a bit raw. IMO what he really needs to work on is his passing. If he can release the ball a bit earlier and with a bit more zip he could be really dangerous. I like that he’s moved from a 10 to an 8 as well, it suits his style more.

If the reports are to be believed and we manage to sell both Laca and Guendouzi for a fair price we should have a decent sum to work with this summer. Be exciting to see what a couple of Arteta’s signings can add to this team.

If Laca is to leave we’ll need another striker and I think odsonne edouard would be good and affordable prospect. And we are in a dire need of a goal scoring midfielder and the szoboszlai would be great option to go after and also an upgrade on guendouzi

I’d rather we use Auba through the centre and promote Balogun from the youth set-up.

Trust me, Nketiah was more prolific than balogun. Balogun has not proved anything yet outside u23. He needs a loan if he stays.

Nothing can be better than either or both Nketiah and Balogun to turn into lethal strikers. But would you risk going into new season with only Auba as experienced striker?

Yes, honestly I would. That’s how much faith I have in Nketiah (as a 2nd striker) . Balogun would be a gamble for a 3rd choice striker, perhaps even 4th of you play Martinelli or Pepe. Arsenal doesn’t have much budget for next year so tough decisions need to be made as well as gambles unfortunately.

Just add a rosicky or cazorla typish player, A playmaker who can press and defend.

The Spoon
Reply to  goongot

Wouldn’t be surprised if we added an actual Cazorla. He’s free too I believe. Player coach role. Be a great player for the young guys to work with.

beNZed
Reply to  The Spoon

If only for purely sentimental reasons, that would be a fucking delightful development 🙂

Would much rather Partey than Rabiot

He should not be for sale. You need more than Auba to win. He’s got the experience to get you goals once in a while and you need such players to take you far in all competitions.

Whenever he is on the pitch it means Martinelli or Nketiah aren’t. Thats not good enough, they need to be playing more than they are.

Lacca is worth too much to just play in Europa games and come on the pitch with 10mins to go.

Its a no brainer to sell him and look to the next generation of youngsters to play the cups.

Get on the boat!!

No, I’m with And1. He’s quality, he’s a grafter, and he scores plenty of goals. He’s experienced, and proven. Imagine Auba stays, then gets injured in September (he’s not getting younger). And we’ve got… Nketiah, and Martinelli (and yes, I think they’re both great prospects). But that would be madness.

Thanks for clearing this up. When it was reported Lacazette was in talks to extend he’s contract, I couldn’t get my head round it. A player who struggles to score away from Emirates. I also find that the type of goal Lacazette scores seems very similar, where the ball is fizzed in, he’s control and slight movement(spin) is brilliant to give himself a bit of space to smash a shot goal-wards is amazing, but I then struggle to bring to mind any variety in goals scored. So this report is good news especially if he can be used to bring… Read more »

Considering his age we should sell Laca and invest that money in grooming and buying younger players.

Slightly off topic, but given our last 4 results I think I will actually be disappointed if we don’t beat Leicester tonight. It starting to feel like some momentum is building.
As for Laca, I quite like him, he is a good player. Happy enough if he stays, not too upset if he leaves and it allows us to bring in someone who can maybe offer a bit more, even in a different position. This may be one of the tough decisions Arteta was referring to.

For me, it will depend a little more on the performance. I could stomach a draw after the run we’ve been on if we put up a good fight. I really don’t want to see a limp performance where we scrape over the line with a point. A win would obviously be best of all though 🙂

i dont want laca to leave

I believe Laca is becoming an obstacle to our chances of scorgoals. He is great at holding up balls, but that’s it. He is slow and has become clumsy. Party would be a very good addition. We lack bite in the CM department. That exposes the defence and slows our attack.