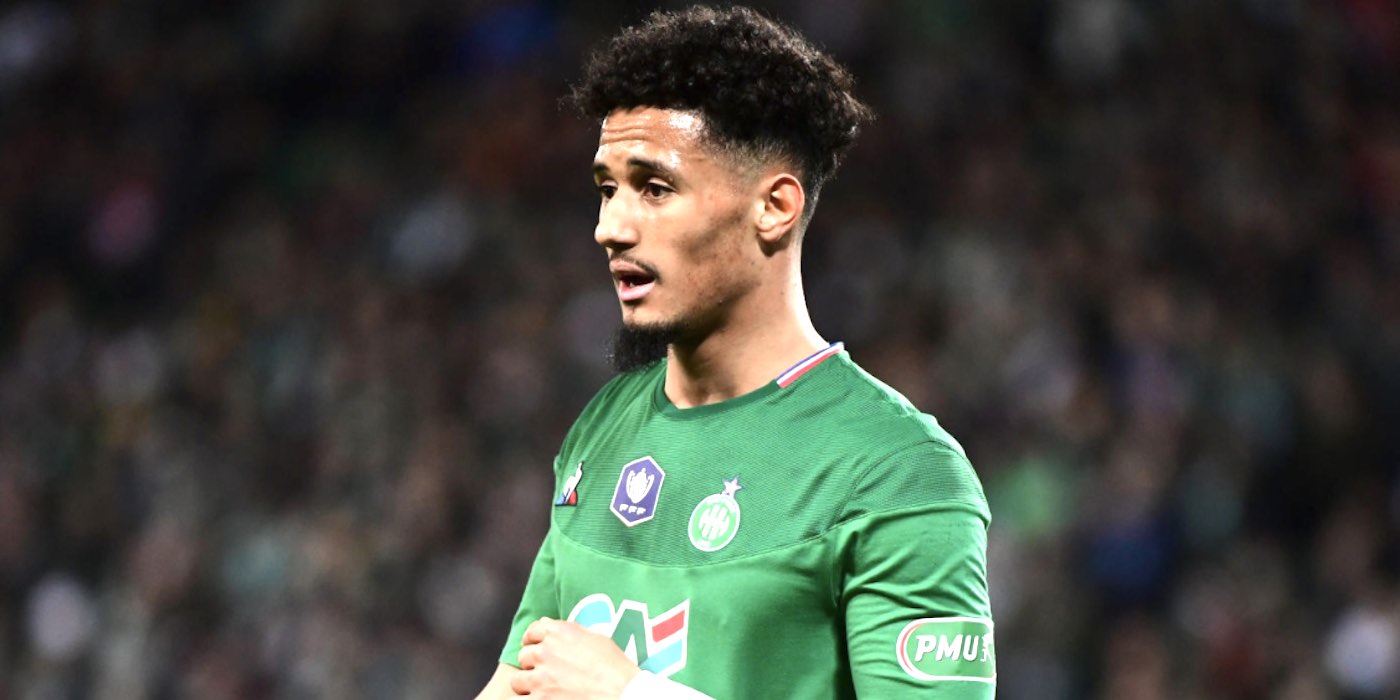 William Saliba says he’s disappointed that he couldn’t play in the French cup final, but insists he’s looking forward to his career at Arsenal despite missing out on such a big game.

Saint-Etienne take on PSG tomorrow, with the 19 year old in attendance to cheer on his former club, and he says he’ll be emotional at the occasion as he bids farewell to his former team.

Speaking to L’Equipe (via GFFN), he said, “I couldn’t miss this. As I am not able to play, I want to at least feel this final as much as possible, by supporting my team in the stadium.

“In front of the TV, it would not be the same. It was important for me to be there, hoping to see Les Verts win. It will also allow me to say goodbye to my teammates properly, because I left like I was a robber.”

He obviously hoped to play the game, but despite negotiations between the Gunners and the Ligue 1 outfit, nothing came to fruition.

“It would have been my first final, my second year as a professional,” he said.

“Of course I hope to play other finals, but you are never sure of anything. On top of that, it would have been my last match with the club that formed me. I hoped, hoped. Truly.

“Even when it became impossible. The two clubs did everything for me to play. But they did not reach an agreement. I was very disappointed.”

Still, concerns that it might affect his relationship with Arsenal seem wide of the mark, and he sounds enthusiastic about his decision to join and get started in the Premier League.

“I fell for Arsenal from the start,” said Saliba. “A number of French players have been there.

“Arsenal has not been at the top of its game for the last three, four years. But, like St Étienne, its badge, its history and its fans made me want it. I have a crush on Arsenal. I had no hesitation.

“I am discovering another world.”

Saliba has been training at London Colney over the last couple of week as Arsenal try to get him over the injury issues he’s had ahead of next season. Let’s hope that despite the differences between the two clubs, Saint-Etienne can stick it to the noxious PSG in the final tomorrow.

Welcome boy. Get in there and do wonders in a defense that is so generous. Make it water tight.

Just curious, is it appropriate to call someone boy (rather than “a boy”) elsewhere? It is pejorative here in America, particularly due to its ties to slavery and the diminutization of people of color. (Note I’m not the downvote – I agree with the sentiment of the comment!)

I watched one interview Samuel Jackson gave and he said young people were calling his grandfather “boy” when he was kid. It does not have the same meaning here, of course. I say “the boy” a lot when I talk about our young players. The boy is incredible means I am talking about Saka. The boy fears nobody means I am talking about Douzi. The boy only needs a bit of confidence, he has everything in the locker means I am referring to Nelson. The boy is industrious after a game points to Willock. I haven’t said “the boy will… Read more »

The boy has a crush on us

“Boy” has no such racial undertones in the uk, and can quite often be used in a positive context. But I’ll try to remember that when speaking to any African Americans in future!

Indeed, it doesn’t even relate to age. We often refer to the team as “the boys”.

There’s a difference between an indirect reference to a group of people (ie “the boys”) and directly calling someone “boy”. There may not be racial undertones but it’s still slightly… irksome.

There is so much hope, expectations, pressure on a very young player, in an important area of the team.

Hope, Arteta (even Luis as senior pro), help him and other CBs like Holding, Chambers become the bedrock of our defence. Mari also has to play a big role. Despite the numbers, hope we get a seasoned pro at the top of his game for next season.

Arteta is clearly ambitious, not satisfied with the FA Cup and chance to play in EL, hope the hierarchy can match those ambitions.

Arsenal also has a crush on you.

Let’s hope it turns into quite a love affair!

It’s possible to pay your respects to your old club as well as your new one. Kos should have taken a leaf out of this young lads book.

I’d give the no 6 to Saliba just for that reason. That said, I have mad respect for Kos the boss. He was an awesome servant of the club during those not so happy days and he always gave his all, including playing through an injury.

I suspect that Koscielny’s disagreement with the club leading to his acrimonious exit could have been as a result of language barrier with Emery as with many other players. (A few complained that they didn’t understand him). Good old Unai. Good ebening.

Maybe he was asked to drop his agent for Kia if he wanted a new deal.

If his issues were with management then most fans would sympathise with that but he really didn’t need to pull that shirt changing stunt. That was the massive fuck you to us fans which ruined his legacy here.

Yes. Kos is still one of my favorites over the years, but a big loss of respect after that stunt. All the goodwill went out the window.

It’s been confirmed that Saliba will get number 4.

There may have been a language barrier between Kos and Deschamps, I suppose. His exit from the national team was acrimonious for no reason.

He knows. He is just showing his lack of respect for him.

What a sad and unfortunate situation. You would think the two clubs would have come up with some agreement to let him play the final.
We have also had issues with our defence for many years. I hope people dont put too much pressure on him, and expect a 19 year old to be the answer to our problems at the back. We still need to bring an experianced, smart, and no nonsense defender. I am sure we can get one from Wolves, sheff utd, or Burnley.

It is. but could you imagine if he went out there and broke a leg or tore an ACL. Hopefully we can give him multiple finals over the next decadde

We will give him FA Cup finals. We know how to do that.

At only 19 years old he has talent and a long way to go.
Let’s just hope our fans don’t ‘crush’ his confidence after he makes a mistake…

youve had a crush on a girl for ages you start going out with her then a few months in you find out what shes really like. a nightmare

Hark at Prince Charming here. Ever thought it might be you? 😉

Been there a few times. Here’s to young Saliba being nothing like that.

The badge the history, he got my support already

A Different George
Reply to  Winterburn87

St. Etienne has a famous history in France too–perhaps like Wolves’ long-ago dominance, followed by decades of mediocrity or worse, and a recent renaissance.

Jury still out. Hard to assess till we see him. Ditto mari. But since we have these two new candidates, I won’t bother chasing more options in defense if I were Arteta. Our improvements have to continue organically IMO. Any Cback that can come in and make immediate guaranteed difference will likely cost us more than our budget. We have too many candidates as is currently many really legacy of continued band aid policy post Wenger. I think Sokratis looks likely to discontinue. Mavropanos has an added lease out on loan again likely the insurance should some of our current… Read more »

“The clubs did everything” except agree with each other.

“I got an offer from Spurs, I told a few friends and they asked me why I was going to change my career to basketball, I told them its not San Antonio, its a small football club in London, we all laughed so hard” Saliba

Any way our PR guys could actually get him to say or tweet this or something? And cement his legend status before kicking a ball for us in anger?

A Different George
Reply to  Tonny

This makes me think of Gnabry tweeting “North London is red” after scoring four for Bayern. All was forgiven.

Good luck chap. Hope you’re not too disappointed on your first day when you show up and your older colleagues are lounging around smoking cabinet sized Havanas and chugging the expensive brandy.

“Let’s hope that despite the differences between the two clubs, Saint-Etienne can stick it to the noxious PSG in the final tomorrow.” I don’t like the “PSG model” as much as the next guy, but am I a bad person, if I hope that in this case it will happen vice versa due to the all around “professional” behaviour of St. Etienne? I don’t mind that the clubs haven’t found an agreement and with that every club protected their own interests, then made a press release saying that sadly the Clubs couldn’t agree on terms, therefore Saliba can’t play. I’d… Read more »

All he needs to say now is that he hates Sp*rs, and assign the correct term to John Terry and he’s good in my book

Or two foot him on the touchline by ‘accident’

I would definitely be pissed off at that age too. 18-19 years old, playing my first ever final and senior trophy with my boyhood club. but he needs to realize that we were willing to let him play if we didnt have to pay the $2.5 mil, but the other club was greedy and wanted the money and getting the player to play in their final. it just doesnt make sense, and I’d be pissed if we paid them the $ and then asked our players to take a pay cut. hell if i were the owner i’d rather give… Read more »