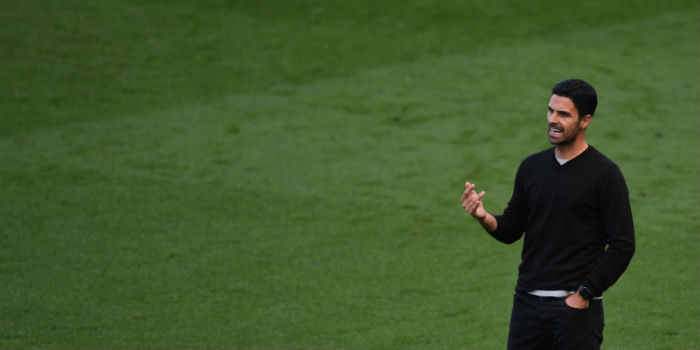 Mikel Arteta says he’s partly to blame for Arsenal not creating enough chances but he wouldn’t be drawn on the specific reasons for his squad’s creative struggles.

Ahead of the final day of the Premier League season, stats show that the Gunners are 13th in the table for “Big Chances Created” trailing our traditional big rivals but also the likes of Everton, Burnley, Southampton and West Ham United. Worse still, we’re 16th for shots taken over the course of the season, trailling even bottom club Norwich.

You don’t have to pore over passing and heat maps to be aware that Arsenal, when dominating opponents, too often play a stilted, one-dimensional type of football that relies on working the ball to the flanks before manufacturing a cross of some sort.

Tuesday’s 1-0 defeat to Aston Villa was a prime example. The Gunners made 536 passes to the Villans 200, including 117 passes in the final third and 34 crosses (via @StatsZone) but created just one big chance didn’t register a single shot on target.

If the club doesn’t qualify for Europe and is forced to tighten the purse strings, it’s a problem the boss may have to solve without recruiting. For the time being, he’s keeping his cards close to his chest.

Asked about the failure to create chances, he said: “I have my reasons that I don’t want to make public, but it’s clear those stats don’t lie.

“When you relate them to Arsenal, it’s not good enough. There are certain aspects of the games that we don’t control as well as we should.

Pressed on whether it was down to a personnel issue, he went on: “It’s everything, it’s personnel, it’s myself that I have to improve to do things better, much better, individual, collective issues, a lot of things.”

It sounds as though pragmatism has also played a part. Eager to tighten up a leaky defence, Arteta has turned to playing with a three-man backline and wing-backs. With one less player in the centre of midfield – a position reserved pre-lockdown for Mesut Ozil – we’ve often looked short of bodies when we reach the final third and have had to rely on our attackers to do the hard work.

“When you are in a process and need immediate results, immediate performances and need to give your team the best chance to fight for the objectives that we have short-term, you have to find a way to do it,” explained the Spaniard.

“You cannot just shoot yourself in the feet trying to do something in certain moments that you are not able to do. We are trying to find this way but obviously the next step in our evolution has to be very much linked into that to improve that area a lot.”

He added: “Yes [it puts pressure on the strikers], and we have to put that [scoring] into the collective psyche more. Everybody should understand better how we’re going to do that process.

“It [the pressure] is inevitable though, at the end of the day they [the strikers] have to be the ones scoring the goals and the others have to get the service right for them and more consistency to get in the right areas more often.”

We desperately need midfielders who can play on the turn and have a bit of skill to beat a man and carry the ball from deep. Cazorla was the last player we had in this area who did that.

Ceballos is good, but not decisive. Özil is brilliant with the right people and movement around him, but won’t press or defend properly. Pepe is a winger who will provide great passes and goals on occasion, but what we really need is a presence on the middle of the pitch with suitable vision, technique, passing range. All good teams have these types of players, we don’t.

Yes ozil was in that category but not anymore and Pepe is not a midfielder. We need creativity in the middle of the park.
The midfielders we have atm are not creative enough. We need once world class no 10 and need to keep ceballos as a back up.
Look at the difference Bruno Fernandez has made in United. Before him coming to unted they were struggling just like us but he did made difference.

Ozil! Not for a very long time. Pete occasionally, Ceballos is more a circulator of the ball

The Arsenal
Reply to  Filsuf

Ceballos does nothing Denilson didnt used to do. I like the guy but he is way overrated because he ‘looks’ so much better on the ball than the others yet he does the exact same thing with the occasional attempt at a forward penetrative pass. I love the effort and performance we have got out of Xhaxa and Ceballos recently but if you think either are good enough to even get us back into the top 6 your mistaken. Ozil is finished. and Pepe spends most of the time receiving the ball on the half way line with his back… Read more »

The Arsenal
Reply to  Ordnance Dave

Cazorla now with half an achilles is still twice the player of all our midfielders combined. The way we constantly go backwards is a symptom of our midfield in particular our middle two/three not being good enough.

I completely agree we need press resistant, mobile midfielders who can carry the ball. It’s not Ozil’s job but he was dropping deep and doing it because none of our midfield are capable. You can see it clear as day in this video. And if you go to 13 mins you can see he was directly involved in 16 goals, 13 playing the pass before the assist plus his 2 assists and 1 goal. Bernd Leno also said the same”his passing is so important, he is playing the pass before the assist.” If we get midfielders in who can do… Read more »

It’s time to stop viewing Ozil as the answer. He’s contributed so little in terms of end product the past 3 years that we’re now having to talk about basic passes as “pre-assists”. It’s one thing if he’s putting a through ball onto Pepe who just lays a simple tap in to Laca, but that’s not what’s happening. He isn’t creating big chances anymore which means we’re just talking about basic passes with low probability of conversion. Add in that he’s now being frozen out by the 3rd possibly 4th manager in a row and it’s clear there’s a major… Read more »

Ozil needs a platform. Solid 4 at the back, better midfield. Even Auba, great as he is, hasn’t traditionally had (maybe does now?) the defensive awareness to cover for Ozil’s deficiencies there.

Until Arsenal is defensively solid with 4 (might have next year), has a ball progressor (Ceballos?), a true defensive mid (huge gap), and a front line that defends from the front (we have, possibly not always consistently), Ozil can’t start / is a luxury player.

Agreed. We need a player who can dribble and carry the ball forward the way Cazorla, Veira and Fabregas used to do. I hate to mention but there was a former Sp*rs player “Mousa Dembele” he was the signing that changed the sp*rs after signing from Fulham. before him they played the way we are playing nowadays. He carried the ball centrally to dangerous positions. For Arsenal it was done more recently by Rosciky, Wilshere, Ozil and Ramsey. Ozil used to drift wide to create space for runs of Ramsey but since his departure the midfield is like just to… Read more »

Midfield is shit in an attacking sense. Been saying it for ages our defence isn’t the best to put it nicely but our midfield is the worst part of the team. I have been a big critic of Xhaxa but he is the best of the lot. What do the rest actually do…What do they specialize in. None of them are all rounders and the things they are meant to excel at do any of them translate it into a game. We saw against Liverpool and City what our level is. We are what sides used to be to us.… Read more »

jimbo
Reply to  The Arsenal

worst midfield options in over 20 years but whats the best part of our team? our attack is pretty poor as well apart from auba. this squad needs serious investment in all areas alot of dead wood needs clearing. but unfortunately it will be another season of luiz mustafi xhaka kola stinking the place out.

Tempted to thumbs up this comment, but I do believe Arteta will at least try to fix this problem, so not all gloom just yet

With 3 centre halves, 2 defensive wing backs, 1 defensive midfielder, 3 out and out forwards against Villa that only leaves 1 space for a creative player. That makes it easy for opponents to stop us.

I totally agree that we have to start at the back to move forward(in every sense) but that will require a different type of player than the uni-position ones we have.

Is this guy ever going to say ANYTHING that doesn’t make sense!! I already love him!!

Pretty sure the plan with Ceballos is to play him further up in a year or two. He IS a playmaker. But this period will do him good as he learn the basics in midfield. Mikel knows!

Until such a time as we find a replacement for Ozil – and, for that matter, are able to stump up the money – then it’s hard to see where the incisive creativity, that we all know this team lacks, is going to come from. I said a few weeks back that, while the player is still on our books, we literally have nothing to lose in playing him and was totally shot down in flames for my trouble. The fact however, as blogs pointed out, that Arteta – who knows Ozil probably better than anyone currently at the club… Read more »

The noises Arteta made about Özil when he came in as manager were very positive and as you say he cited his prior relationship and knowledge of him as a fellow player as a distinct advantage in that respect. Since then it’s gone to shit whereas almost every other player has stepped up. I don’t believe it’s lack of will, effort or belief on the part of the manager. Maybe Özil can’t accept a former colleague as his boss. Get rid!

I am willing to bet this has nothing to do with Ozil’s quality or performances in training. This has everything to do with Ozil not taking the bloody pay cut. Everyone including Mikel took the pay cut because it was for the betterment of the organization as a whole. Mikel is all about the team first mentality over everything else. Ozil not taking the pay cut is seen as a selfish act rather than a team first mentality. How can Arteta play him while he earns his wages in full while all his teammates have agreed to a pay cut?… Read more »

Ozil is a piece of shit, own up to it

Artetea is spelling out the obvious truth. This is the problem. 1) We struggle particularly against more discipline teams that sit deep and choke off passing lanes. 2) We lack enough players with high technical ability to beat player for player on their own. Pepe and Auba are low percentage when it comes to taking on players. Auba can beat them only with clear grass in front of him to run into. 3) Our transitions are pondrous. Working out from the back around our 6 yard box is a dangerous gamble but also allows teams to clamp shut and organize.… Read more »