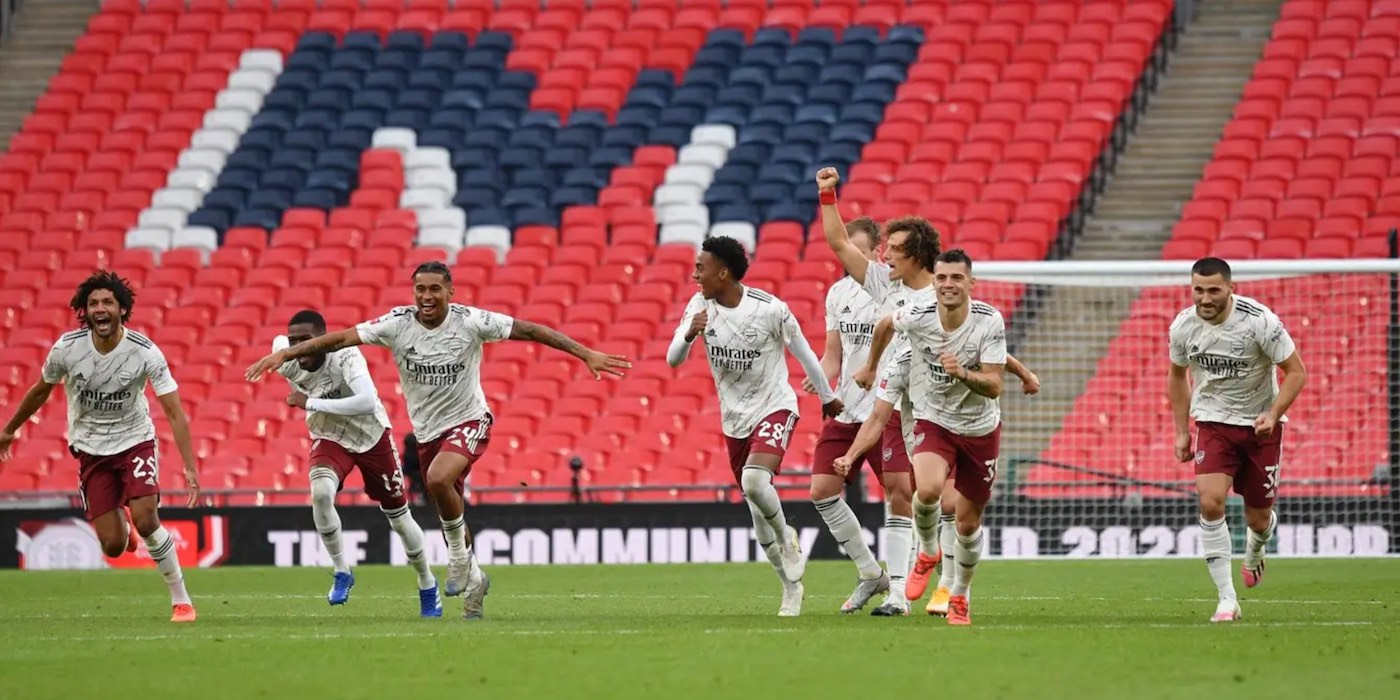 Arsenal kicked off the 2020/21 season just 4 weeks after winning the FA Cup by beating reigning League Champions Liverpool in the FA Community Shield. They managed to beat a strong Liverpool side despite the majority of the squad having less than a week of training following their holidays.

Let’s delve deeper into the data to see how the Gunners triumphed in the annual curtain raiser. 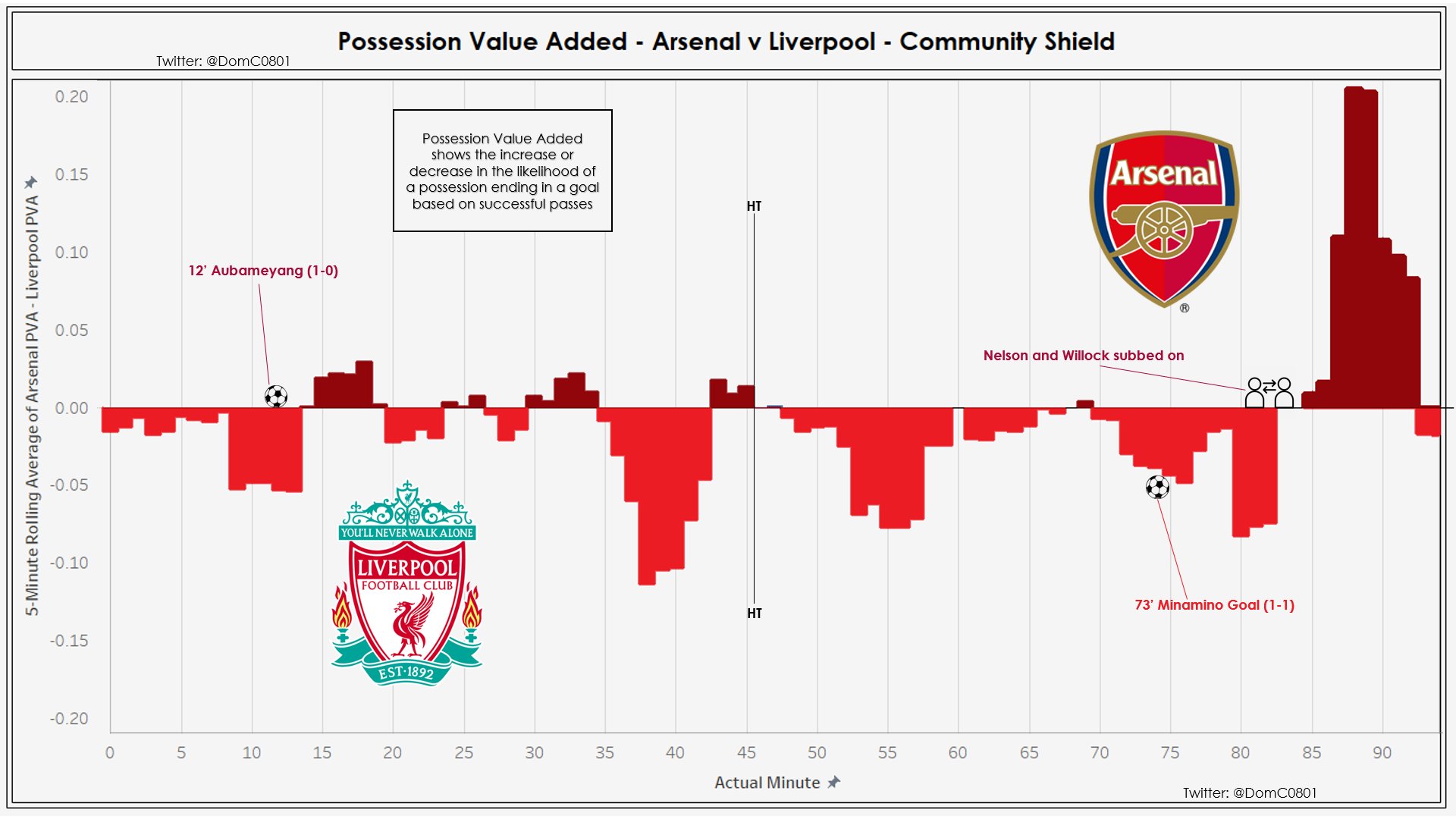 The above graph shows the Possession Value added difference between the two teams from yesterdays match. Possession Value Added or PVA measures the increase or decrease in the likelihood of a possession ending in a goal based on the successful passes a team makes. Essentially it shows how threatening you are when you have the ball and whether or not your passing is effective in increasing your chances of scoring.

From this we can see that Liverpool dominated the majority of the game, with Pierre-Emerick Aubameyang’s goal coming slightly against the run of play. Despite that, Aubameyang’s goal seemed to settle the Arsenal side who were much more threatening from that point until the end of the first half. The second half however saw more Liverpool dominance with the Arsenal defence and midfield putting in a commendable shift given the lack of preparation they have had and the transfer noise surrounding some of them (Maitland-Niles and Holding).

Mikel Arteta managed to make a difference with his substitutions though, with his 82nd minute introductions of Joe Willock and Reiss Nelson for Eddie Nketiah and Bukayo Saka proving a masterstroke as the two Hale End graduates showed great energy and drive in pushing Arsenal forward in an 8 minute spell which proved the most dominant of the game. 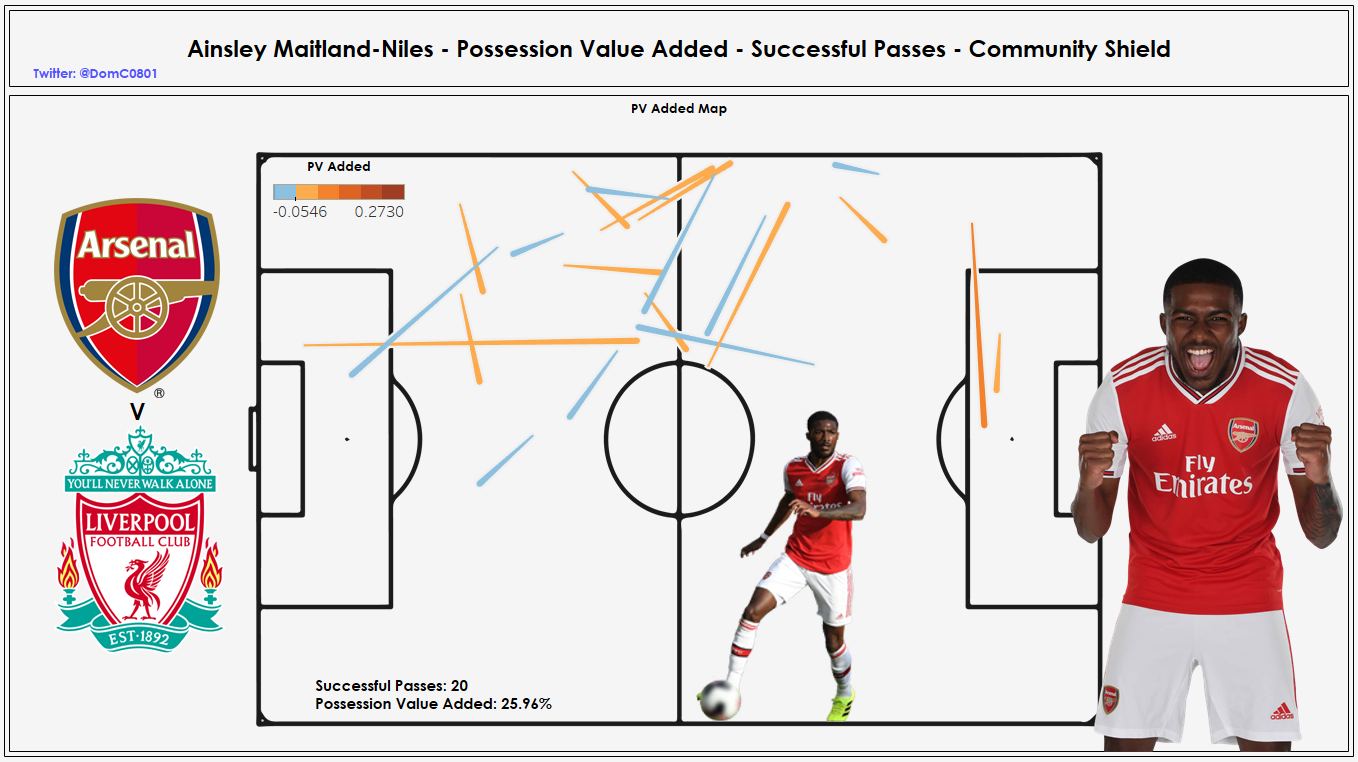 Ainsley Maitland-Niles put in a Man of the Match performance on his birthday as well as receiving his first ever England call-up (not a bad birthday!). Maitland-Niles’ successful passes resulted in a 25.96% increase in Possession Value meaning that the Academy graduate increased Arsenal’s chances of scoring by 25.96%, second to only Andy Robertson yesterday.

More on Maitland-Niles’ performance later though. 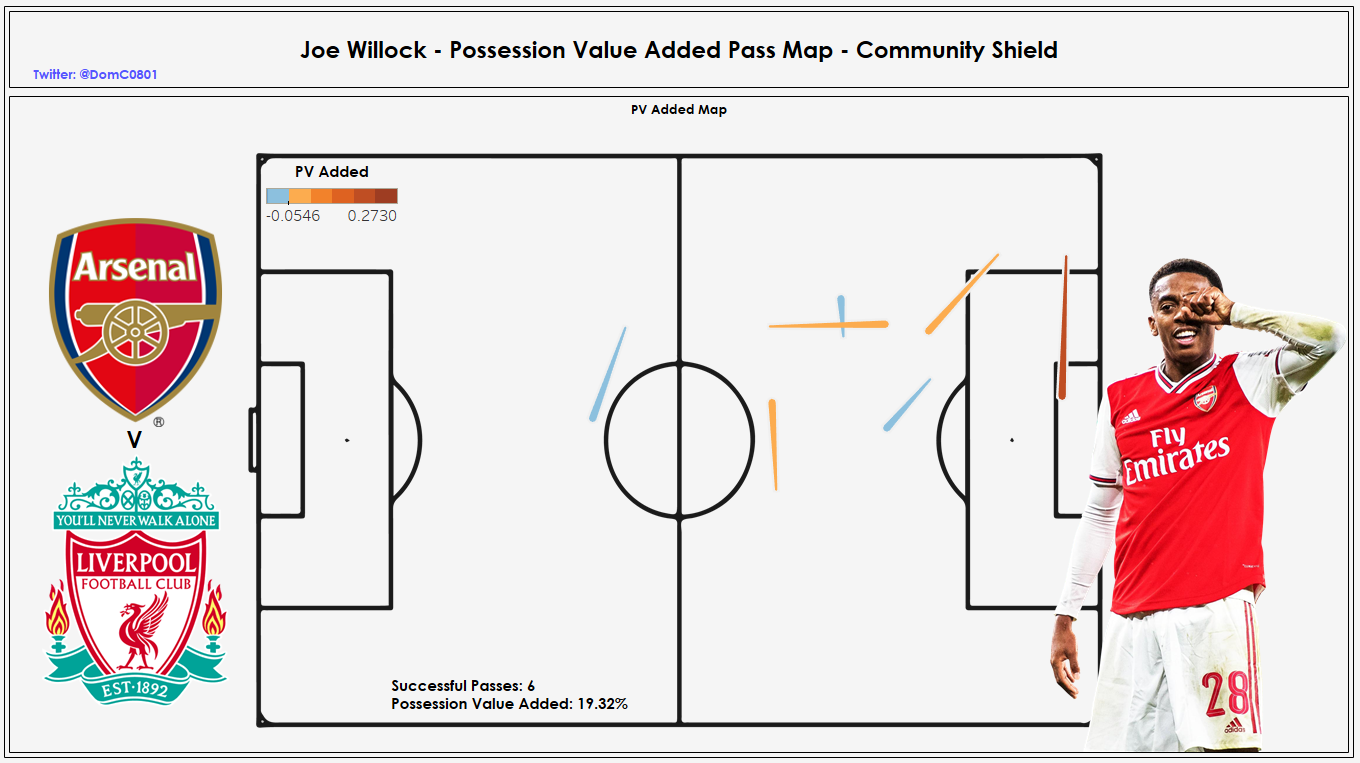 The above graph shows Joe Willock’s successful passes and the resulting increase in Possession Value associated with that pass (Blue shows a decrease in PV, orange a slight increase, red a large increase).

Willock in particular proved pivotal as he was deployed in a seemingly unfamiliar centre-forward role where he dropped in between the Liverpool defence and midfield and used his strength and pace to push forward.

He finished the game as Arsenal’s 2nd best Possession Value Added passer, with his 6 successful passes resulting in a 19.32% increase in Arsenal scoring a goal which was third to only Andy Robertson and Ainsley Maitland-Niles overall. 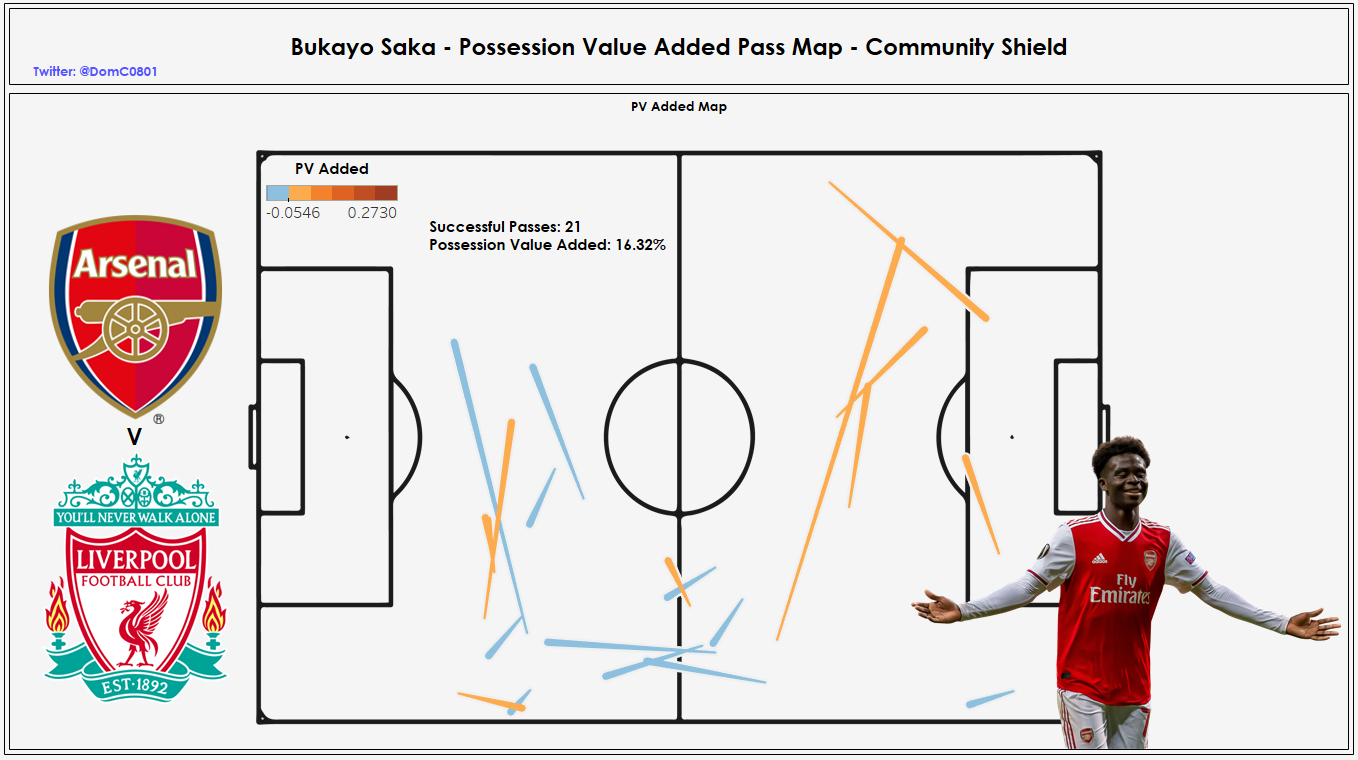 Another Hale End graduate who proved pivotal in the victory was our new number 7, Bukayo Saka. He gave Arsenal a great outlet on the right-hand side and linked well with Hector Bellerin to get through the Liverpool press, while also increasing Arsenal’s chance of scoring by 16.32%. This worked wonderfully for the goal, with Bellerin picking out Saka on the right-side who got in behind Andy Robertson and produced a cross-field ball to Pierre-Emerick Aubameyang, who did what he does best to curl it brilliantly beyond Alisson.

Saka’s cross-field pass to Aubameyang resulted in a 10.5% increase Arsenal’s chances of scoring and displayed the 18-year old’s undeniable ability. 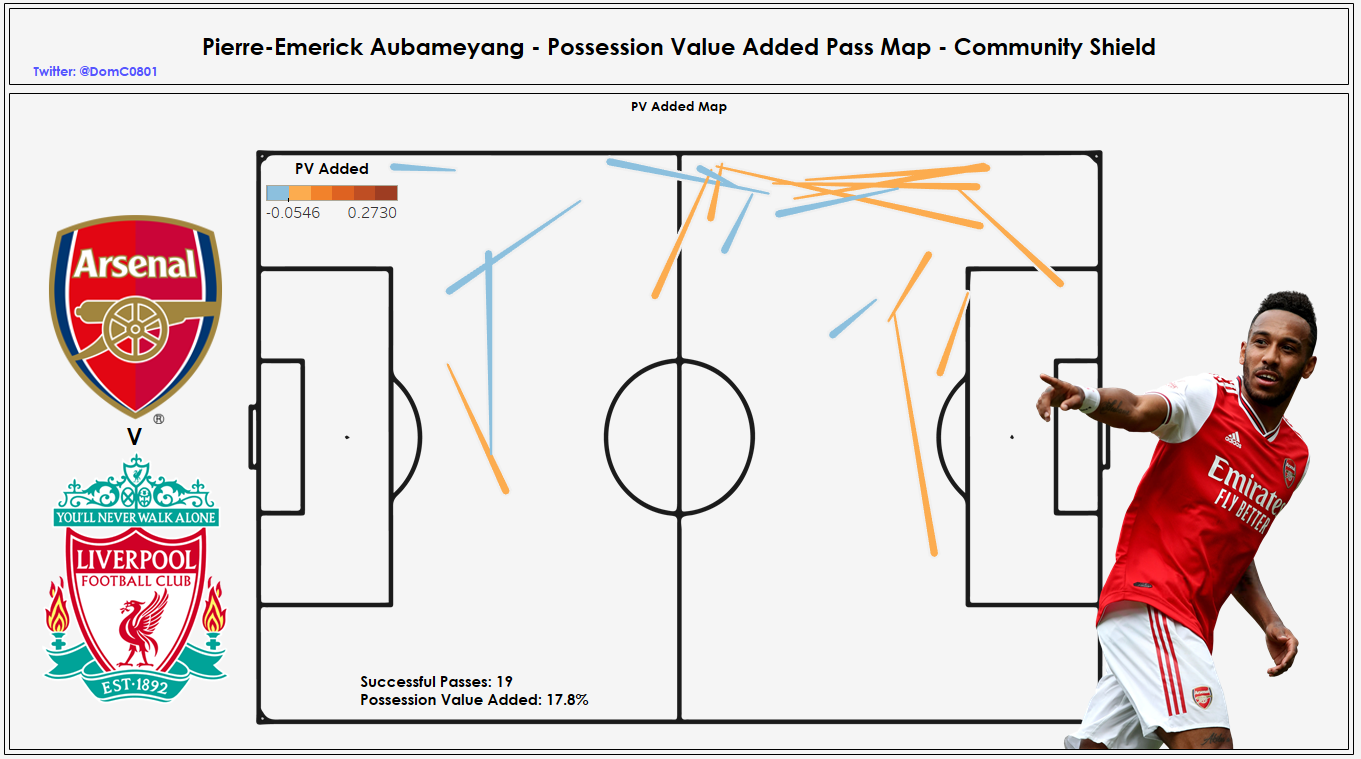 Now let’s focus on our defensive performance, starting first with the centre-backs. 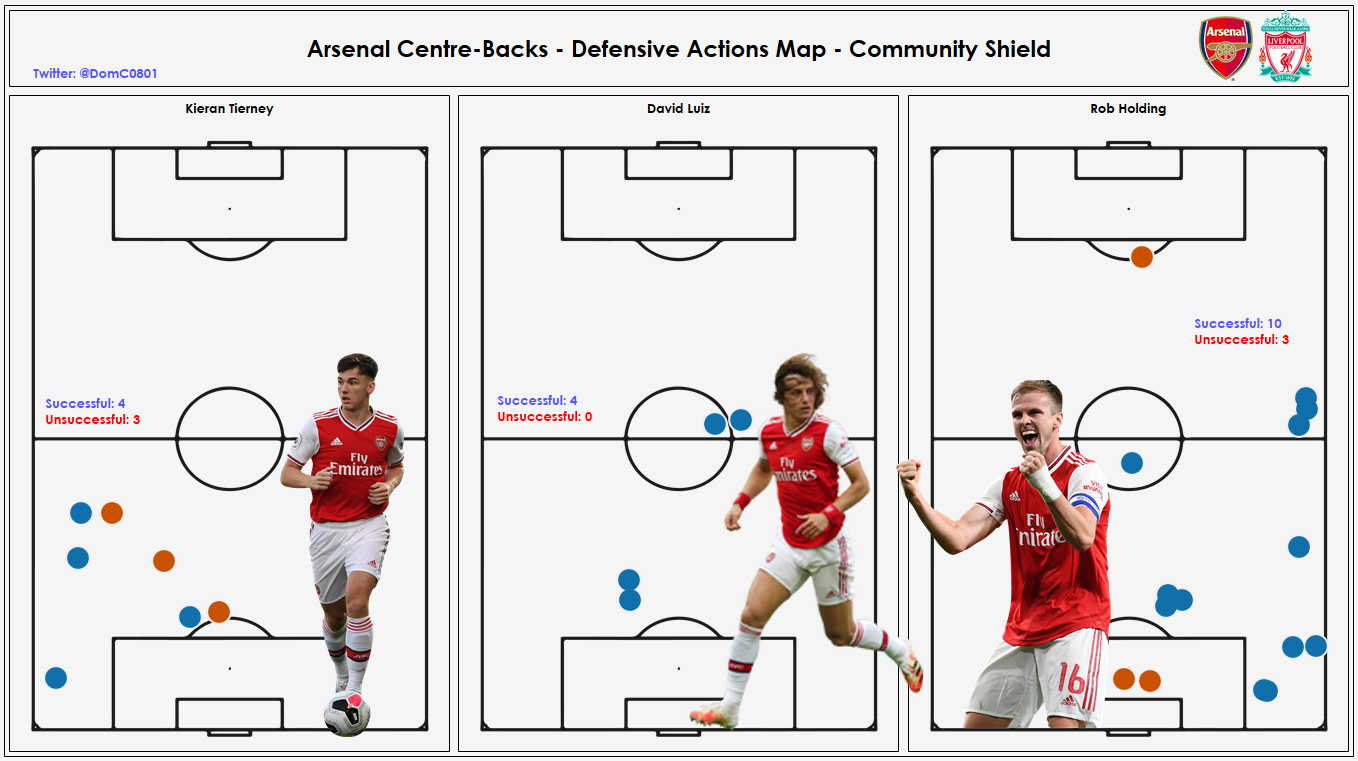 Arsenal’s 3 centre-backs showed great resolve and discipline in containing one of Europe’s highest-scoring teams from last season to just a single goal. This in spite of genuinely limited preparation (Mikel Arteta revealed after the game that David Luiz had only had one training session since returning from holiday). Rob Holding in particular was put under a lot of pressure, with Liverpool focusing the majority of their attacks down their left-hand side with Sadio Mane and Andrew Robertson targeting the area between Rob Holding and Hector Bellerin.

Holding, despite the speculation surrounding a loan move to Newcastle, put in a stellar defensive performance with the former Bolton man completing 10 Defensive Actions (Headers, Interceptions, Tackles, Blocks etc.) and failing in 3. David Luiz and Kieran Tierney were less troubled with the pair combining for 8 successful Defensive Actions and Tierney failing in 3 in his time on the pitch.

Now let’s look at our wing-backs. 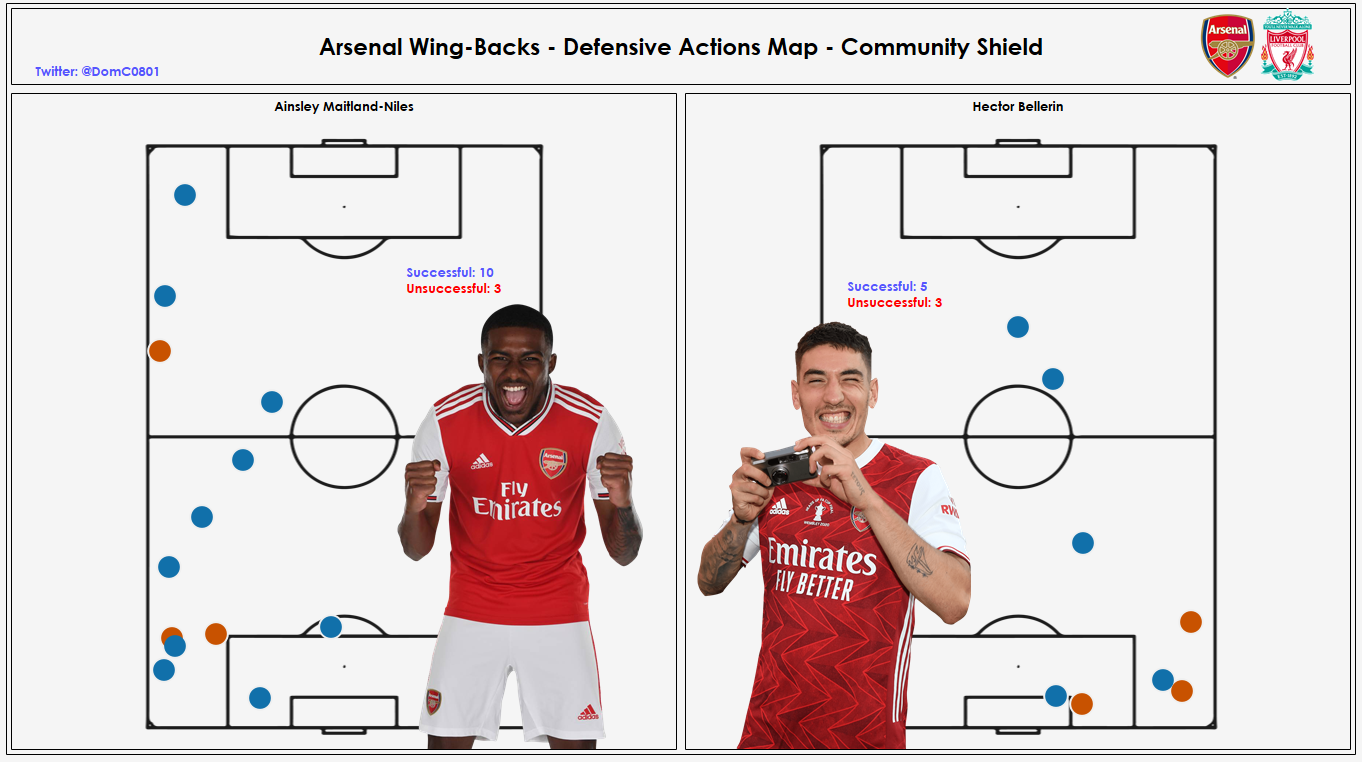 Ainsley Maitland-Niles put in a brilliant defensive performance as he completed 10 Defensive Actions, only failing in 3 as he helped to keep Mohamed Salah and, for a period in the second half, Sadio Mane quiet. Maitland-Niles successful challenge on Sadio Mane in the box was wonderfully done as the Liverpool man would have been 1 on 1 with Emi Martinez had he not intervened. Hector Bellerin put in another good performance as the Spaniard continues to look more and more like his old self following last season’s injury problems. Bellerin completed 5 Defensive Actions, failing in 3, before being substituted in 60th minute.

And finally – the central midfielders. 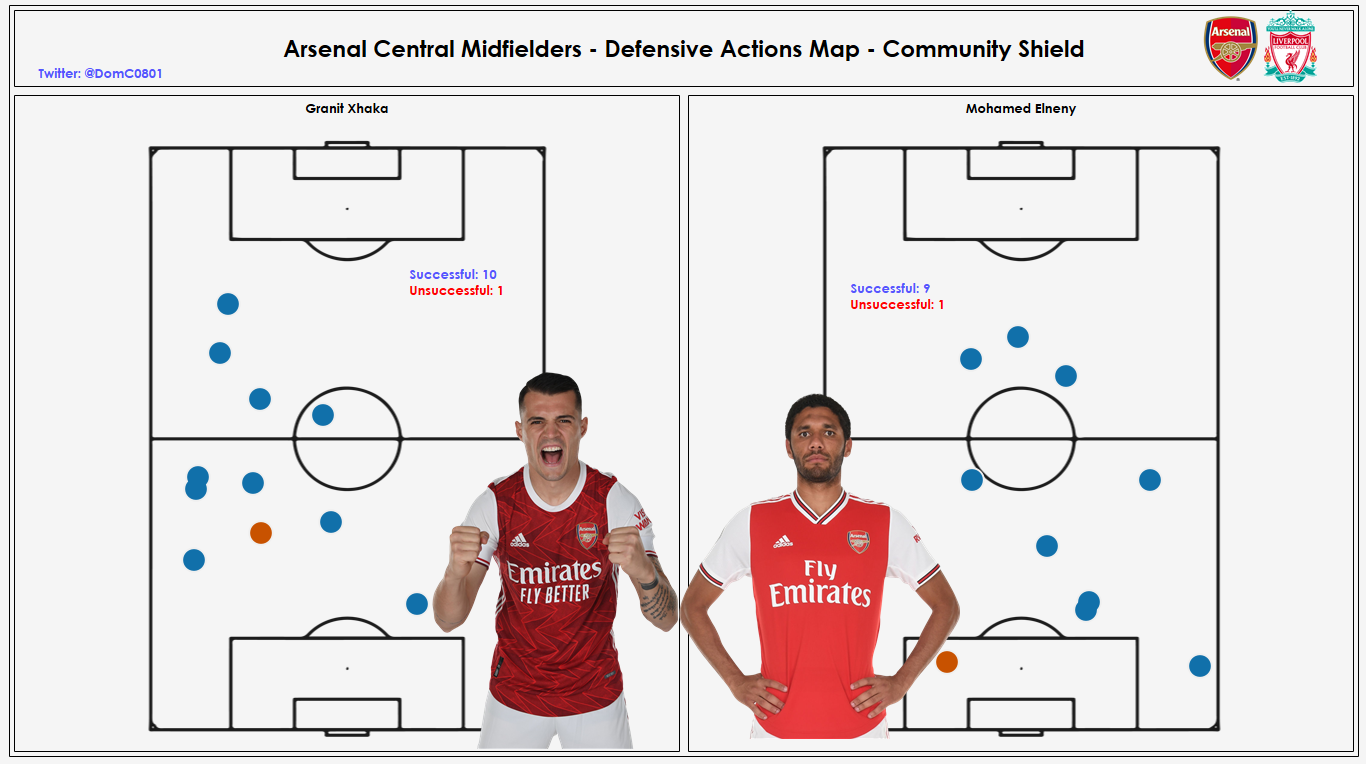 Arsenal’s central midfielders both showed tremendous discipline without the ball and great composure on the ball as they helped shield the Arsenal defence in a backs against the wall display. Granit Xhaka continued his good form under Mikel Arteta, completing 10 Defensive Actions and failing only 1 with the Swiss international winning the ball in the Liverpool half 4 times, 2 of which came in the last 10 minutes as Arsenal pushed Liverpool back in search of a winning goal.

Alongside Xhaka, Mohamed Elneny put in a disciplined display in what was his first game for Arsenal since the last fixture of the 2018/19 season away to Burnley, completing 9 successful Defensive Actions with 1 unsuccessful. With Arsenal’s lack of midfield options and speculation surrounding the futures of Lucas Torreira and Matteo Guendouzi, could we see the Egyptian starting the season alongside Xhaka?

In the end, it’s another trophy to Mikel Arteta’s name and another impressively gritty performance to add to what is a growing list under the former Arsenal captain, all of which is very promising for the upcoming season. Hopefully over the next few weeks we will see more incomings in the window especially in midfield where we could use an injection of quality and depth.

Burnley 1-1 Arsenal: By the visuals

Thnaks very much for these, interesting way to see the players’ performance. Holding seems better up the pitch than near his goal, though that will be true for lots of defenders under pressure. Strong Liverpol side and shows AMN, WIllock and Saka are stepping up with experience. Too easy to judge on early appearances when, even with Pires, it takes time to move up to the right level.

One very small point is that the unsuccessful red spots come out as orange on my laptop. I don’t know if that happens to everyone. It’s not that I can’t work it out…

Salibaba and the Forty Thieves
Reply to  C.B.

If you are using Windows OS. You can check your colour calibration settings to see if you can adjust your screen colour.

helps push those pesky numbers in to my head with some nice cosmetics.

was Emi so quiet he didnt get one?

Nice. But I did think Arsenal in the first half looked very surefooted going forward and believed in what they were doing, exemplified by their goal which was the fruit of some patient and incisive play. The image that comes to mind is a kid learning to walk prematurely – a little clunky, granted, but impressively precocious! Liverpool on the other hand mostly depended on Robertson firing in crosses into dangerous positions which we dealt with pretty well. I’d say we looked the better footballing team in that half, in spite of what Klopp said in his post-match interview, which… Read more »

C.B.
Reply to  The Kolkata Gooner

He was upset he got beaten by a better manager.

I initially thought this was Scott as last time some people mentioned that the info he provided was quite difficult to understand, and he said he would try something different.
These new visuals are much better and easy to grasp. Cheers Dominic.

Agree with you – much easier to understand these and the explanations reinforce that. I always feel such analytical post are under appreciated (at least based on feedback from number of comments) but keeping it simple like this should help. Thanks

I do like Scott’s stats bombs too. The variety in presentations means that there is something engaging for everyone 🙂

lovely analysis; perfect complementary combo of stats and visuals one of the most striking things since Arteta’s arrival is the transformation in our defensive organization. gone are the days when we looked so shaky in set-pieces and vulnerable from every wave of attack by the opposing team. the fact that we contained VVD, Fabinho and Wijnaldum all of whom are pretty good at attacking set pieces while simultaneously making Mane, Firmino, and Salah invisible just goes to speak to how defensively solid we have become. if we can build on and improve this defensive solidity we have enough attacking firepower… Read more »

And just like that, most have moved on from Guendouzi.
If only he had good advisers. Sad to see him.not missed at all.
Elneny is a useful squad player and should stay if torreira leaves

Thanks a ton for this breakdown. It gives a much better understanding of the match.

I am really interested in the choice of photos. 😀

This was lovely. Great work!

Arteta made a comment late last season after we beat Liverpool in the league. He said something along the lines of there still being a gap in quality between the two teams, but that now the gap in effort on the pitch had completely closed. I suppose that these stats go to that point, if not prove that we outworked them on Saturday. By my count, the midfielders, wingbacks, and centrebacks in total had 52 successful defensive actions vs only 14 failures. We rarely got caught out, won most of the 50/50s, and just seemed to have wanted it more.… Read more »