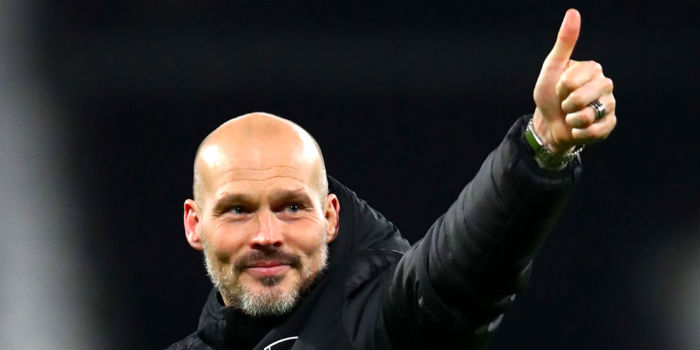 Freddie Ljungberg has confirmed his departure from the club.

Via Twitter he said, “I have decided to leave my first team assistant coaching role at Arsenal to progress my management experience.

“I have been involved with this club on and off since 1998 and am grateful for all the opportunities they have given me both as a player and as a coach.

“I wish Mikel and all the team every success for the season ahead. Thanks also to the fans for their constant support and for always being by my side.

“I hope we will all meet again soon.”

The former Invincible was a hugely popular figure in the coaching set-up, particularly for the crop of young players who have made a breakthrough this season.

Bukayo Saka, Joe Willock and Eddie Nketiah all worked with him at U23 level, and last year Saka paid tribute to how much he’d learned working with the Swede.

“He gives a lot of advice to me every day but one of the most, the best piece of advice he’s given me is to stay humble,” he said.

“He’s been with me since I was 15, seen me do amazing things but he always tells me to stay humble, keep working hard because he really thinks I can be a top player.”

His former teammate, and now Technical Director, Edu said, “We’re really sad to see Freddie leave as we know how much he loves Arsenal.

“However, we know he has had various opportunities over the last 12 months and stuck to the job at Arsenal.

“Now he has the opportunity to consider other options, and it makes sense for his career at this time.”

Mikel Arteta said via the club’s official website, “Freddie has been a really important member of my team since my arrival.

“He did a great job picking the team up when Unai left and we all have 100 per cent respect for him as a man and a coach.

“I know I’ll be facing him on the touchline in the future.”

He’s not wrong there. Best of luck Freddie ❤️

Great guy, hero for stepping in to start arresting the emery decline.

One down vote, maybe Emery visits this site 😉

The Kolkata Gooner
Reply to  Wubbalubbadubdub

Precondition for sexiest gooner is that the candidate has to be an Invincible.

My wife is very sad with this news.

We Love you Freddie ❤

Sad for us but very happy for him, hopefully he can go on from here and have a successful managerial career.

Maybe he can succeed Mik in somewhat between 5 and 22 years. ?❤️

Excellent personality. Loved by most. Wish you all the very best Freddie

Best of luck Freddie, you are and will always be an Arsenal legend!

All the best to our Legend.
Hopefully we can recruit another Legend to cover his void. Any thoughts?

God (DB) is on the lookout for a coaching opportunity.

dont know why the thumbs down merlin, Bergkamp would be my choice too

I guess some didn’t get the reference.

The Kolkata Gooner
Reply to  Kostas

Yes, always good to have one of those around. DB10 would be brilliant.

Zyrth
Reply to  The Unai Bomber

Because you’ve got red hair!

Sorry to see him leave again but he’s ambitious and he wants to be a manager. Freddie leaving doesn’t mean that there’s been a falling out it just means that Fred is his own man and wants to be in charge of a team himself and I don’t blame him.
Best of luck Freddie in everything you do.

True, but it’s a tad unusual to leave a well paid, secure, job when you haven’t got another lined up (according to David Ornstein’s post that broke the story, now not on the site). Ornstein’s post went on to say it was best for both parties – whatever that means.

Freddie won’t be out of work for long and anyway he wants to be a boss, so it’s best for him to move on. I’m sure that he’ll be a success wherever he goes.

The way I read into that was that while Freddie doesn’t have a position to go to right now, he would want to be available.

Given the topsy-turvy nature of this season, better to be starting the new season with personnel that are going to provide consistency, rather than there being s cloud having over the team and coaching staff that should an opportunity be presented to Freddie, that it would have s ripple effect going forwards.

Makes a lot of sense to me, and I wish Freddie the best of luck.

I think he’ll have learned a lot from watching Arteta. If I remember rightly he wasn’t part of Artetas plans originally but they came to a mutual understanding and this was probably always how it was meant to conclude.

Freddie is one of my absolute favourites, I can understand that he needs to leave to progress his career but this has still made me cry. All the very best Freddie, we’ll always love you.

Best of luck, Freddie. Certainly one of the Arsenal greats. It’s still a little odd though. He’s leaving but (according to David Ornstein’s earlier post that broke the story) there’s no job lined up. In the world of football (as elsewhere) that’s unusual to say the least, unless there’s been a falling out at some level within the club. Anyway, Jimmy Greaves once said “Football is a funny old game” – this seems to bear him out.

“We love you Freddie…”

Best of luck to Freddie.
Had an impossible task after Emery was given the boot and did well.
A nice guy who will do well for himself !

I personally think Freddie was kept on when Mikel took over because of his experience with the young players and now Mikel has had some time, it’s a good time to rethink the arrangement.
I wonder if this is actually one of the 55 redundancies but wrapped up nicely for the press/fans…

Doubtful given that Mikel is bolstering his coaching staff this summer….

Well I doubt he needs 3 assistants. He is after a set piece specialist coach. He’s not looking for someone to fulfill the same job as Freddie. So unless I’m mistaken his job doesn’t exist anymore. Which is the very definition of redundancy.
It’s possible to be both hiring and laying off at the same time

Ah Freddie. I hope he has a great career as a manager and, at such time that we need a new one he has the experience and knowhow to take his place at Arsenal again.
Unless, of course, Arteta just keeps on winning trophies forever. I’m good with that too.

He will be back one day.

I’d like to think this was all known well in advance and the club have given Arteta reasonable resources to replace Freddie and further build his backroom team.

I’d like to think that too. That said, David Ornstein’s original post (that broke the story) still reads oddly to me:

? Breaking: Freddie Ljungberg leaves Arsenal, deciding to pursue management career. No job lined up but seen as best for all sides that he’s free when options arise. Swede made a big impression at #AFC. Arteta is seeking additions to staff @TheAthleticUKhttps://t.co/3dgkpSA4Z5

I don’t interpret anything untoward in that. “Best for all sides” could be interpreted as carrying some kind of negative connotation but by itself it’s not inherently suspect.

Wouldn’t say odd. It could mean that if he were to leave during the season they would need to look for a replacement mid-season, leaving temporal gaps in staff responsibilities. Going to be a hectic schedule already. This way they might have time to bring in or promote someone else. But my guess is good as yours.

“He walked off the pitch and then kicked his gloves. The fans were not happy. I got asked about it and said, ‘At Arsenal, that’s not how we behave and not what we do’. I stand by that. Mesut was injured, but I would not have picked him for the squad because I want to make a stance that it’s not what I accept from an ​Arsenal football player. That’s my decision. I won’t make the decisions again, but that’s what I think.” Freddie Ljungburg Thank you Freddie for starting the ‘take no bullshit’ management stance back to the squad… Read more »

Legend. Amazing person to have on the setting, and he did manage to stead the ship a bit before the appointment of Mikel, wish him all the best, and wish he have a magnificent career, and hope to see him again at the club!

I’m 44 now, and to me you will always be one if my Dream 11 lineup. When we skipped classes in business school back then to play football on the Amiga, i renamed all my players to my Arsenal legends. The old back four, Vieira, Henry, Bergkamp, all those. You were always on my team. Amongst those legends. You still are.
Thanks for the memories.

Thanks from “hinsidan” in Denmark. Legend.

I gentleman and a legend

He was a rubbish player and a hopeless manager. Good riddance!!

Are you talking about your Fifa career mode?

You are disrespectful. Sober up.

Ever heard of the word “irony”?

Heard about, but did not quite understand it until now 😉

Maybe in quotes next time?

Know your audience, mate. So many trolls on boards that many people have stopped considering ironical responses unless the intent is made abundantly clear.

The only problem I’ve had with him is he talking trash against us when he moved to West Ham, saying we had no ambition

We love you Freddie, because you got red hair…

This website uses cookies to improve your experience while you navigate through the website. Out of these, the cookies that are categorized as necessary are stored on your browser as they are essential for the working of basic functionalities of the website. We also use third-party cookies that help us analyze and understand how you use this website. These cookies will be stored in your browser only with your consent. You also have the option to opt-out of these cookies. But opting out of some of these cookies may affect your browsing experience.
Necessary Always Enabled
Necessary cookies are absolutely essential for the website to function properly. These cookies ensure basic functionalities and security features of the website, anonymously.
Functional
Functional cookies help to perform certain functionalities like sharing the content of the website on social media platforms, collect feedbacks, and other third-party features.
Performance
Performance cookies are used to understand and analyze the key performance indexes of the website which helps in delivering a better user experience for the visitors.
Analytics
Analytical cookies are used to understand how visitors interact with the website. These cookies help provide information on metrics the number of visitors, bounce rate, traffic source, etc.
Advertisement
Advertisement cookies are used to provide visitors with relevant ads and marketing campaigns. These cookies track visitors across websites and collect information to provide customized ads.
Others
Other uncategorized cookies are those that are being analyzed and have not been classified into a category as yet.
SAVE & ACCEPT
wpDiscuz
57
0
Would love your thoughts, please comment.x
()
x
| Reply