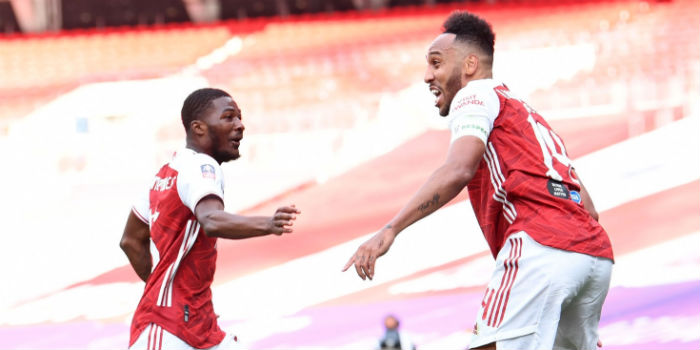 Ainsley Maitland-Niles says having a positive attitude was key to Arsenal’s win against Chelsea as Mikel Arteta’s players bounced back from going behind early to seal the FA Cup with a 2-1 win.

It didn’t augur well when Christian Pulisic fired the Blues into an early lead but the Gunners slowly worked their way back into the game and got back on level terms before the break via a penalty, won and scored by Pierre-Emerick Aubameyang.

The club captain then delivered a knockout blow with just over 20 minutes remaining, deftly beating Willy Caballero with a dinked finish.

Matteo Kovacic’s red card with 17 minutes remaining helped Arsenal’s cause, as Maitland-Niles and his teammates survived a lengthy period of stoppage time to make it 14 wins in the competition.

After the game, the wing-back was understandably delighted to get his hands on the trophy.

“It’s the first time of grabbing it myself and it’s a fantastic feeling, it’s indescribable really,” he told Arsenal.com.

“I’m proud of every one of my teammates and staff members for putting the plan into motion and we executed it perfectly.”

On the performance, he added: “That’s what we’ve been working on since lockdown, having a positive attitude, always wanting to win games even when we do go down, and playing our football no matter what happens.

“It prevailed today and it was fantastic to see the boys turn that around and really go all out attack to win the game for us.

“I love it over there [playing wing-back]. When I’m on the pitch I thrive when I get more minutes and no matter where I’m playing, I’m just happy to do a job for the team and bring him one of these at the end of the day, so it’s fantastic.”

Maitland-Niles: Arteta demanded more from me

Take a bow son, you deserve it after making a comeback!

And on a side note, WE BEAT CHELSEA IN 3 FA CUP FINALS!!!

VAR will solve the problem
Reply to  iGooner

This was the best. My best moment was how Emi came out of the box, clearly handled the ball and Anthony Taylor waved play on…double pleasure to see the chelsea team going crazy as if that would have made any difference to the result!

Michael D
Reply to  VAR will solve the problem

The BBC replayed it carefully and it looks like Emi actually did not handle outside the box. Emi does not make mistakes…

Emi knows how to dance on the line of the law. Stuff of Mastery . That stunt was insane

Thank you. Emi is superb. He can take us to another level. He should be given number one slot

canon fodder
Reply to  VAR will solve the problem

He handled the ball on the line as the video replays have shown. His body was out but the ball was in.

VAR will solve the problem
Reply to  canon fodder

Ah my bad then. I didnt really see the replay. In real time looked he was out. A fool to doubt Emi, I am!

Rufusstan
Reply to  VAR will solve the problem

Almost proper Yoda speak. should be: To doubt Emi, a fool I am

Kay-Em
Reply to  VAR will solve the problem

AMN put in a mighty shift today, as he did against City – yet another transformed player.

Him and Auba bossed that left side. Pure athletes.

I’m totally with you on this one. EL was important because it means we can keep academy players from the pipeline that produced AMN, with Arteta working with them instead of them being out on loan or sold on.

He’s more two footed than I realized. Great asset that can play all over the pitch. I hope we keep him.

Can’t describe the feeling! Just basking in the sweet taste of an FA cup and planning to give out likes to every comments…to share in the glory!

This guy is absolute powerhouse. He can keep pushing, winning duels, not giving in, keeping shape, working hard, developing and making us proud to be one of our talents. Get in!!!

AMN will be a key component of the Arteta Arsenal machine if he stays.

I genuinely do believe that AMN will be playing for England in the very near future.

Between EMI and Leno, I’ll choose the former anyday for the simple reason that he commands his area better than Leno. Crosses are no problems for him, his huger frame is clearly an advantage.

Yea start emi in new season and then leno to cup games or if emi makes mistake switch. That will be healthy competition

I’m glad someone appreciated that.

Don’t get too Cocky!

Luckily Willy did not rise to the occasion.

The defender’s Holding, the goalkeeper’s Willy.

Can Willy put his cockup behind him? I seriously doubt that..

The way Arteta has used Niles, is class apart. Saka is not defensively as solid as AMN and he gives more muscle to the team. He was game changes against City and today again he was preferred over Saka. Arteta just pulled out a rabbit out of hat in last two FA cup games in the form of AMN!! I hope he stays and I have a feeling he will.

Yes agreed. Saka, rightly has been getting all the plaudits this season, he has been brilliant and a real bright spot for us, along with Martinelli. So glad they both signed new contracts and can grow with us. But on AMN I have to say I have always thought there is a player there, even back when he was on loan at Ipswich. The only problem seemed to be a tendency to casualness that seemed to prevent coaches trusting him to perform consistently. Arteta has apparently seen that too, but he has been able to do something about it by… Read more »

For all the talk about needing more and better players in the squad — which is very true! — it’s already hard to see where Saka fits in the lineup after showing so much promise. AMN has earned himself minutes at LWB, Auba and Pepe’s names are written in pen on the team sheet up front…I guess Saka LM in a 4-4-3? Keep developing him into an 8? (I don’t know where he played regularly for the youth teams?) It’ll be a good problem for Arteta to spend the next month thinking about, hopefully after bringing in one or two… Read more »

AMN will stay and as I replied to another poster I can really see this young man starting for England in the future providing he stays level headed and works his nuts off.

If he leaves because Kia managed to bung through a deal for Cedric, I will not be pleased

I dunno, seems like since we signed Cedric, both AMN and Bellerin have knuckled down and put in some great performances.

Maybe real competition for places is good for certain players?

Unrelated but I saw Cedric picking up a winner’s medal and Auba was last and he didn’t seem to get one. I hope the cheeky bastard hands it over to Auba.

I think They will all get a medal as long as they played a game or have been unused subs in an FA match.

Actually Each club in the final receives 40 winners or runners-up medals to be distributed among players, staff, and officials.

Guendouzi opens your eyes and see! Hope you can see what AMN has come through.

Glory be unto God for today victory.
Now we need for better tomorrow players in the team.
Arsenal need players that have arsenal DNA, look how our keeper reaction, not once after money alone, please let board invest with good defensive midfielder and creative midfielder, they have to trust manager with good money,
Arsenal need players likes, NDIDI, THOMAS, PH.COUTINHO, M.VERRATTI, D.PEREIRA, MARQUINHOS, THIAGO A, S.ROBERTO, HAVERTZ, KALIDOU, D.UPAMECANO. O.KABAK.
Then Arsenal frontline can face any team.
Only two nor three players more, Arteta can have opportunities to challenge for many trophies, because he knows which player he needs.

This kid is amazing. His favourite position is in the middle. We go ahead and play him right back, then we trow him on the left and he still gives 100%.

Thought he was good today with ball retention. May have more than made a case for his retention in that left back ‘natural position’. He has played full/wingback for 4 seasons now and it is his best bet to seal a role in this team. Think if we get a good offer for Kolasinca, we should sell him. I expect we may still weigh on offers on AMN as well and the decision will be close. Others to consider as mentioned Mustafi or Chambers (albeit hard to move either since both are still not functional and jury still out on… Read more »

Anything less than 30m quid is not good enough

Hope he slots into midfield next season a bit more. He’d be our winaldum. Our unit. A powerhouse. I think he can bulk up a little bit more to help in duels.

We are a better balanced team when AMN plays wide left , he has pace can , can defend , attack and is strong .
When he receives the ball he does look for a forward pass which keeps the game progressing , when Kola plays there his first intention is to play very safe , a backwards or sideways pass

In 3 years AMN will be THE midfield lynchpin, Patrick Viera

Where are all the he’s not a full/wing back and he’s not Arsenal quality dudes now?
So proud of you, Ains! ?⚪️

AMN has been better than bellerin and cedric this season.

Well done lad. Another Arsenal career that was floundering but has been rescued by Mikel Arteta. Fantastic stuff.

We all liked the way our team buckled down & played to win. A bit sad that Pepe’s goal wasn’t allowed. Hats off to Mikel Arteta for being a gentleman on & off the field. Giving the credit to the players, thanking Pep etc not forgetting how he reached there – a rookie manager with the right attitude.

I truly want us to keep AMN! He is such a useful squad player. I know that he has changed his representatives and has been sending out feelers to other clubs (according to the oracle that is Ornstein), but I feel he can be a very good player for us! Top attitude from the lad!