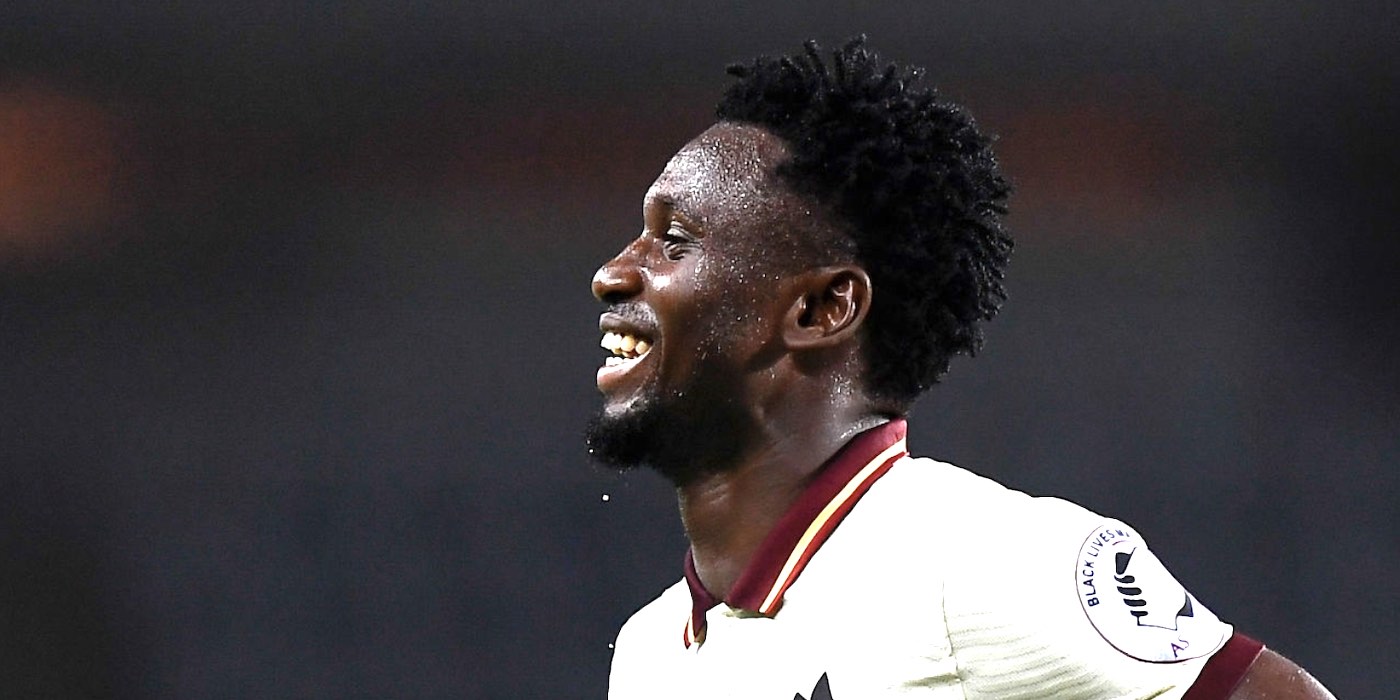 The midfielder has been linked with a move back to Italy with AC Milan and Fiorentina said to be interested.

It’s now being reported that Roma are considering a swap offer, using Amadou Diawara as bait to get their man. Considering the state of the market and football club finances, it’s not beyond the realms of possibility that we’ll see a lot of similar deals between now and the close of the transfer window.

Diawara is a 23 year old defensive midfielder with 10 caps for Guinea, and he arrived in the Italian capital via spells with San Marino, Bologna and Napoli. He made 30 appearances for I Giallorossi last season.

Arsenal have a working relationship with Roma, having agreed a deal for Henrikh Mkhitaryan to make his there move permanent for a payment of just £1m via his agent Mino Raiola. However, the Armenian’s departure takes £200,000 a week off the wage bill.

Midfield reinforcement is something Mikel Arteta is seeking this window, with much of the focus on Atletico Madrid’s Thomas Partey. His €50m release clause is going to be a problem on its own though, unless the cost of that is offset with a player going the other way, leading to speculation about Alexandre Lacazette going the other way.

There are some considerable issues for the club to sort out in midfield, with Torreira seemingly open to an exit; Matteo Guendouzi’s Arsenal career all but over after he fell out of favour with Arteta; while Dani Ceballos is reportedly wanted for next season by Real Madrid, but that may well be a ploy by them to provoke a bid from the Gunners.

We don’t have any more info that this Italian story, but in the realms of transfer nonsense that do the rounds, this doesn’t seem completely implausible, so we’ll give this one a fence sitting 6 on the Poo-O-Meter.

This deal has to happen purely because his name fits to the tune of agadoo perfectly: “Aaaaamaaaadou dou dou, Diawara Amadou”…magic

still think toreira has something to offer. Don’t want to lose him this season

Torreira is ‘not quite good enough’ for a top PL team and might still come good in Italy, while Diawara..?

Is diawara an upgrade on our current midfield options ? would really like to get some insights from gooners who follow italian football and are not biased by scout-nation.

Strange window this is

Its 2020 mate, strange would be trading in Torreira for the right to play an actual bull terrior in front of our defence.

Can’t say I’ve actually seen more than a youtube compilation, but do Roma want to move him on because he doesn’t want to be there, or because they don’t rate him?

Swapping out one flawed player for another makes little sense, unless his flaws would be covered up by our system

I heard he makes defensive lapses and mistakes. Roma cant cope because they only have smalling behind him, but we at gunners have the mytical pairing of mustafi and luiz, who shout out ‘bring it on!’ Put him alongside xhaka and let the mistakes flow. Fear not. Im kidding.

Would prefer they give us Pellegrini instead.

Roma are offering him a contract. The new owners see him as the new Totti.

Well how about torreira guendouzi for traore pellegrini? We’re also giving them our zidane.

Swops make more sense in the Covid financial climate but are very tricky to pull off given player valuations, wages, add-ons, agent’s fees etc. Arsenal would have almost a whole new team by now, according to all the speculation. Back in the real world… .

We dont even have a scout on the ground in Italy to tell us how good this guy is! Maybe we get a scout too in this swap

Whilst I think we all appreciate the way that the pandemic has affected the transfer market, the fact remains that we really are now just a red and white Everton. This is the result of four seasons without Champions League football and a board who are now acting like we’re penniless. Trying to take positives from this, but, honestly…..meh. ?

how about they actually pay a fee for our player this time around?

I still remember Kabo Diawarra; he was our worst striker in living memory; if we snap up this guy, I hope he fares better than his namesake!

Sanogo was much worse than Diawarra

Sanogo scored 4 against Benfica in the Emirates cup, including a back heal. Have some respect!

Haha, Sanogo is probably the worst player i’ve ever seen, he would have looked crap playing in a park!

Ah sanogo… brings back memories.. like jeffers and that japanese one…

Bit unfair. He’s a winger, not a striker and was seriously hampered by injuries. Finally doing well at St Pauli (albeit only at Bundesliga 2 level).

At least Lee Chapman scored for us, Diawara didn’t.

I remember a comment by one of the Bayern defenders after that fateful 2014 CL home defeat. He said Sanogo was one of the best strikers they had played against that season!

Could have been trolling, but they probably couldn’t work out what he was doing because he hardly ever seemed to know himself!

Park scored a goal for us and only played a handful of games, Diawara on the other hand…

Sanogo had trouble running and standing up at the same time, he had a truly remarkable skill set

You could add Michal Papadopoulos and Tomas Danilevicius to that esteemed list of strikers although I’m not sure we owned either of those guys and they certainly didn’t hang around for long.

Neither of those played, Sanogo played something like 20 times for us, which puts him at a different level

African – Defensive Midfielder – sign him. They have the engine in their genes.

I don’t disagree, but hopefully the reading materials I’ve responded with can help.

Sorry, but how it this eugenist or racist? If he said that they ONLY had engines in their genes, it will be a different matter.

Clearly racist. I’ve seen enough african defensive midfielders who are useless, lazy, unathletic, far too clumsy and definitely of no use for the mighty Arsenal. I really hate this generalization.

Doesn’t sound racist at all…

This awful race-biased analysis of the game is unfortunately perpetuated by many mainstream journalists and commentators. I’ll never forget sitting down to watch a game of Japan vs Cameroon in 2010 being told by the commentators that it’s be the “industrious, organisation” of the Japanese against the “Samba-like joyful” football of the Cameroonians. Besides the Samba comment (samba in Africa?!), this was mainly an untruth because the game was between a very organised Cameroon and a frankly audacious, tricky Japan.

Never seems to go away though…

Hi, this is really perpetuating a stereotype about black/African players that we should be moving beyond at this point.

I don’t think you meant anything racist by it, but it’s worth doing some reading.

Here are a few links worth checking out:

Yes, this must be why we never sign the Irish, big bunch of drunks.

What? A possible trade and no mention of that car brand agent?

That’s an automatic +4 on the poo-o-meter right there!

Is it me or do we seem to be getting rid of players that Mislintat brought in? Mav has signed a new contract but loaned out again, Sok looks like he is going, along with Mkhi (who has gone) and Guendouzi and now Torreira. Are we quietly trying to get rid of Mislintats signings?

I don’t know that it’s very intentional. If you look at most of these cases, there are unique circumstances for each: Mavropanos was rated by our staff, but injuries have taken their toll. Sokratis was always meant to be a stop-gap signing rather than one for the future. Arteta hasn’t played him, and I doubt Mikel has anything against Sven since they weren’t even at the club at the same time. Mkhi was mainly there to get us some value out of the problematic Alexis situation and subsequently underperformed for us. Guendouzi’s behavioural/disciplinary problems are what’s driving him out, not… Read more »

Maybe, because Mislintat signings were awful? Sokratis, Lichsteiner, Mikhi really? Guendouzi with his lack of brain and athleticism?

It Is What It Is
Reply to  Welsh Gooner

They are players whose values have risen. Job done Sven.

Can’t wait for this season of speculations to end.

Partey, according to https://www.whoscored.com/Players/238940/Show/Thomas-Partey is weak on discipline and concentration. Doesn’t sound good….

Him with Luiz behind him. What could go wrong?

Diawara also lacks concentration and aerial duel according to same website. Maybe Zakaria or sangare would be better, if u wanna follow whoscored

“Come, come the fall of man,
Arise the demon…”

Arsenal having another swap deal for torreira is the most stupid thing being influenced by there stupid & indecisive board because the whole Europe are beginning to notice arsenal vulnerability as desperate and weaklings. My point is this, arsenal should rather sale and cash in on torreira if the must and same goes with the rest of the fringes and flops scathered in the team. The cash to sign the likes of partey can’t fall from the sky. And arsenal boards should better start sacrificing for the club than rather trying to make furtune for there individual pocket every transfer… Read more »

I know we are going to be linked with so many incomings/outgoings. I don’t necessarily like the idea of doing swap deals, as I feel they massively undervalue a player’s valuation. I think I would prefer even getting slightly less than market value than go through a swap.

Also, am I the only one who thinks that we should start pursuing players with low release clauses (Pellegrini, Szoboszlai, etc.)?

A defensive midfielder who tends to have defensive lapses? Smfh, why not.