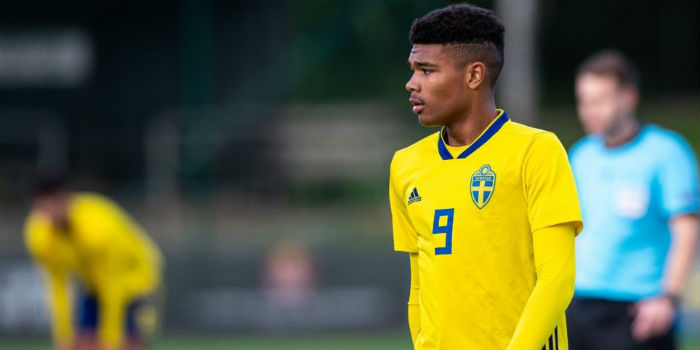 According to Italian journalist Gianluca di Marzio, AC Milan are set to sign Swedish striker Emil Roback from under the noses of Arsenal

Back in June, his club Hammarby confirmed that the 17-year-old had been in close contact with the Gunners with reports suggesting he’d even taken part in training sessions at London Colney.

It now looks like he’ll be heading to Serie A in a deal that will cost the Rossoneri around €1.2 million plus add-ons.

What swung it the way of the Italians? It might well have helped that Zlatan Ibrahimovic, who moved back to the San Siro in December, recently became a part-owner of Hammarby.

That funds are tight at the Emirates could also have played a part.

On a separate note, we’re still waiting to hear whether George Lewis has completed his move to the club. The 19-year-old Norwegian was another who had a trial pre-lockdown and was believed to be on the verge of a deal.

Are the club going back to procrastinating over transfers again?

Not sure we ever stopped procrastinating?

VAR will solve the problem
Reply to  OdalGooner

Tired of seeing our youngesters doing better elsewhere and our failure to get any good deals done. Bennacer, the Jeff, Mallen all could have improved us significantly…on top of that we had first option on Bennacer which we refused??? We sold the Jeff for 1 mill? How in the world we value Lacazette at 30 mil while Atletico value Partey at 45 mil? One is a striker the other one is a defensive midfielder and not even at Kante’s level. If a fan can ask these queations, then I fully expect the owner of Arsenal to be able to ask… Read more »

adriano
Reply to  VAR will solve the problem

Public Elneny
Reply to  VAR will solve the problem

The procrastinating issue on their ‘to do’ list which they’ll get to eventually….

Apologies for being totally off topic. But can I just draw everyone’s attention to the fact that World Cup winning Mario Gotze is without a club at the tender age of 28.

Surely he’s a better bet than Willian and someone who plays in a position we actually need.

Am I missing something here?

He has a rare metabolic disorder that leaves him prone to muscular injuries, and has made over 15 league appearances only twice in the past five seasons (Wiki).

A perfect fit for Arsenal, maybe?

VAR will solve the problem
Reply to  Glenn

Ahh..that makes sense. I was thinking it was more of a mental health issue. Thanks for the reference.

Definetely a gamble. I think something is not alright with him…something mental. It could be depression, anxiety or lack of motivation. He is also untested in England. But then again, if anyone can reignite his career, it would be Arteta. I think Arteta can definitely improve any player as long as the sakd player has motivation. Otherwise, he will just become a less expensive Ozil.

For anyone who has been watching the Bundesliga for a few seasons particularly the last two, they will know how much he has lost it.

If you ever find arsenal deciding to let Saka go for nothing at the age of 28 and no other clubs come in for him for over a month now, you will get a clear picture.

He might be 2nd best cos auba will be blistering at 53.

my reply in moderation but saying he’s basically finished at the highest level. Nobody’s even bothering to come in for him and from the little Bundesliga I’ve watched recently I’d be pissed if we wasted our time with him

Thanks guys. I thought there must be something. Such a shame. Reminds me of our beloved Jack. So cruel to give a young lad so much talent but no way of cashing the cheque.

Injury prone… big wages….sounds like a perfect signing for us. Especially as we’ve got 2 world cup winning players already in the squad that do such a good job for the club.

I suppose that they are thinking particularly carefully about how to allocate scarce resources. Arteta needs to do a lot with a little, so prioritising players, even youngsters, will be part of it. Generally on transfers, Arsenal have little spare cash and haven’t, to date, raised a single £ in player sales as far as I know. It will take time and planning to move players both in and out in this window without crippling the club financially.

You’d have thought they could Hammar out a deal..instead they just Roback on their original interest. He doesn’t cost much more than Emil either.

As good as it sounds getting in as much bright prospects as possible, we have to be realistic about our finances presently with regards to the needs of the 1st team.

With players like Martinelli, Nketia, John Jules and even Balogun, I believe we can get by without this kid. Let’s not allow the media transfer frenzy dampen our high spirits. If he’ll rather pitch his tent with Gazidis and Co then good luck to him.

These stories annoy me. I’m now lamenting the clearly world class capabilities of a player I only heard of 37 seconds ago.

You might as well do a headline that reads “There’s cake. But you can’t have any.”

Turns out it is who you know lol.

We have spent a year trying to force teenager’s into the first team. A few may belong, but we are where we are because of it. Every rumor aside from Willian seems to be teenagers at a steep price. I hope someone has a real plan.