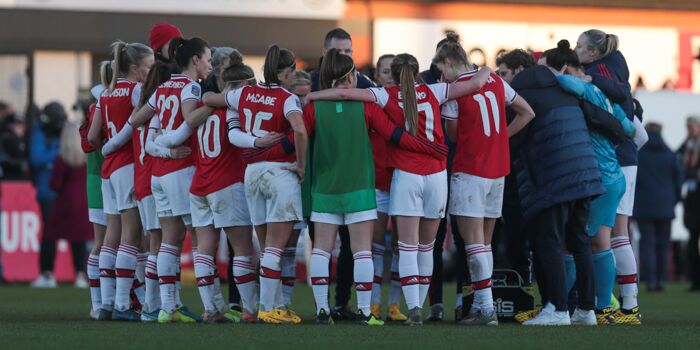 THE LOWDOWN
Arsenal kick off their WSL campaign with a home game against Kelly Chambers’ steely Reading side at Boreham Wood. The Gunners, of course, are left to lick their wounds after exiting the Champions League at the quarter-final stage to PSG in San Sebastián at the end of last month, though the hope is that that match will give them a physical edge over a Reading side who haven’t played since February and had to furlough their playing staff at the outset of the pandemic.

Montemurro’s side are coming into the side a little under the radar having done their transfer business early and in positions that don’t fire the collective imagination. As Michael Cox said in his WSL preview for the AthleticWSL preview for the Athletic, “Last year, Joe Montemurro’s side offered the technical quality to compete with Chelsea and City but lacked both squad depth and defensive steel.

Sit back, relax and enjoy the best bits from the last time we faced Reading ?

This time there’s a place in the #ContiCup semi-finals up for grabs ? pic.twitter.com/qovDawYitO

Arsenal will be instantly reunited with two of their summer departures, with Dan Carter and Emma Mitchell returning to Meadow Park after joining Reading this summer. Montemurro will want to get off to a good start and maintain his side’s record of not dropping a single point to any team outside of the big three since April 2018.

TEAM NEWS
Centre-half Jen Beattie is unlikely to play due to a recurrence of a lower back injury in the defeat to PSG. When I asked Joe Montemurro about Jen’s injury earlier in the week, he told me, “She had a bit of a lower back issue which kept her out at the turn of the year. She had a great pre-season, there was no sign of it and against PSG it came back again very early in the second half. We’re giving her every opportunity to be fit for Sunday so we’ll keep monitoring that.”

Beattie didn’t figure in the training pictures that were released on Thursday so she must be considered a significant doubt. Goalkeeper Lydia Williams is expected to return to training at the end of September after minor ankle surgery. “It was a lingering situation which sort of crept up on us during pre season. Something that wasn’t there initially. I think we just erred on the side of caution to make sure that it doesn’t happen again or doesn’t bite us during the year,” Montemurro said in his pre-match press conference.

Steph Catley is fit to start after a calf problem interrupted her pre-season, fellow new signings Noelle Maritz and Malin Gut are in the squad, while Caitlin Foord is in line to make her WSL debut having played for Arsenal in the Conti Cup, the FA Cup and the Champions League already. Mel Filis departed for London Bees on Friday.

LAST TIME OUT
A late Kim Little goal gave Arsenal a 1-0 win in the Conti Cup quarter-final at home to Reading in January. The last time this fixture was played in the WSL Arsenal ran out 6-0 winners in October 2018 with a hat-trick from Vivianne Miedema and a goal a-piece for Danielle van de Donk, Beth Mead and Jordan Nobbs.

FACTS AND STATS
Arsenal have scored in 37 of their last 38 Women’s Super League games, netting a total of 120 goals. In fact, the Gunners are currently on a streak of scoring in 25 successive games [Opta]

Arsenal have won seven of their eight Women’s Super League encounters with Reading, drawing once [Opta]

Fara Williams averaged 0.21 setpiece assists per game last season- the most in the WSL [Statsbomb]. Fara took 55% of those setpieces on her right foot and 45% on her left.

As well as being the WSL’s top scorer last season, Vivianne Miedema had the highest XG assisted at 0.42 per 90- a tally she bettered, actually achieving 0.55 assists per 90. Nobody created more goals for teammates than Miedema [Statsbomb]

PLAYER TO WATCH
When Jordan Nobbs returned from injury last season it was expected that it would take her time to find her best form again. Jordan has been candid about the fact that she hasn’t rediscovered her peak levels yet but all the signs at the end of last season pointed to a player on an upward trajectory again.

Arsenal’s spine of Williamson, Beattie, Little, Nobbs, Wälti and Miedema is untouched and that chemistry ought to come in handy for Arsenal and for Jordan to pick up where she left off last season. Jordan was left on the bench for the PSG game for tactical reasons and she will be raring to go for this one. 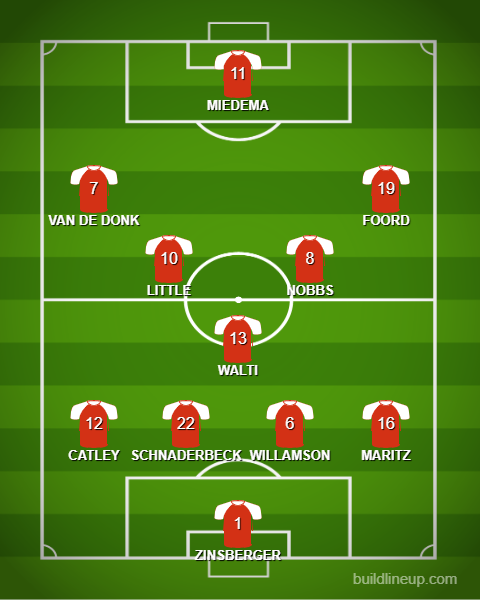 THE OPPOSITION
Reading have seen a large churn of players this summer, with the likes of Jade Moore, Sophie Howard, Maz Pacheco, Millie Farrow, Jo Potter, Rachael Laws and Remi Allen leaving the club. However, they have brought in Emma Mitchell, Dan Carter, Chelsea midfielder Deanna Cooper, New Zealand goalkeeper Erin Nayler and Korean striker Ga-eul Jeon and most eye catching of all, they have Jess Fishlock on loan from OL Reign in Seattle.

The Royals always play a high pressing game against Arsenal, seeking to disrupt their build-up by pressing the centre-halves and midfielders in possession. They make you earn every inch of space and Arsenal can expect a tough physical examination. Meanwhile, captain Fara Williams possesses the best long distance shot in the division [she scored straight from centre against Arsenal at Meadow Park three years ago].

Reading boss Kelly Chambers said, “In terms of getting the season kick-started, what a way to start; away to Arsenal! But I think that with the signings that we have brought in, our squad is definitely strengthened and the characters that we have brought in are true professionals and second-to-none. I’m excited to watch them step out onto the pitch for the first game.”

HOW TO CATCH THE GAME
In the UK, the game is being screened live on BBC Online and the Red Button at 12.30pm. In the US, you can watch the game on the NBC Sports app. You can watch the game on DAZN n Italy and Germany or ViaPlay if you are in Scandinavia and Sky Mexico for Mexico and Central America, Sportsnet if you are in Canada. Anywhere else, you can watch for free by downloading the FA Player app. The game is being broadcast, one way or another, everywhere in the world.

England’s top women’s league premieres on https://t.co/av8g1gFeHC tomorrow with @AVWFCOfficial vs. @ManCityWomen at 9:30am ET / 6:30am PT ?

COMING UP
We will have match reaction from Joe Montemurro on the site at around 5pm on Sunday evening. On Friday, we will also have an interview with Leah Williamson for you.

So we’re up against a good coach and a defensively solid and physical side. This should tell us a lot. *Rubs hands gleefully* Good luck, girls. Hope Foord scores and we spread the goals around.

So excited to watch the Arsenal Women live from the US this season. COYG!

Looking at that predicted line- up and bench. Wow.
No wonder Mel has done the “Frank Bough”.