When Jordan Nobbs ruptured her ACL in November 2018 she was in the form of her life. She had scored her ninth WSL goal of the season after just eight league games just before getting the injury. She returned to the team in August 2019 just before the start of the 2019-20 season and everyone knew that it would take several more months for her to rediscover her best form.

“I’m still nowhere near where I was,” Jordan admitted when I spoke to her in February. Joe Montemurro spared Nobbs for the two games before Christmas, a Conti Cup victory over London Bees and the WSL victory away at Everton, in order to give her an extended mid-season break. It worked well. Since the New Year, the data shows that Nobbs’ output has been steadily increasing.

Before Christmas, Nobbs had scored twice in the WSL- the 4th goal against Brighton in September and she was on the score sheet in the 11-1 win over Bristol City in December. After her extended mid-season break, she scored in consecutive games against Birmingham and Brighton in January, as well as a typical burst into the box and slightly less typical header away at Liverpool in February.

With her fitness increasing, Jordan found the legs to make those support runs that make her such a goal threat. Her partnership with Vivianne Miedema is an underrated aspect of Arsenal’s attack. Miedema likes to drift into pockets of space out wide and between the lines and Nobbs’ athleticism and willingness to run in behind sees her fill the space Miedema vacates. Understandably, Jordan’s fitness levels meant that these runs were less frequent at the beginning of the season.

Since the mid-season break, all of her key attacking and creative metrics have been creeping up. Jordan has overtaken van de Donk and Kim Little to have the best non-penalty strike rate with 0.41 goals per 90. The volume of her shots is increasing, she takes 2.46 per 90 now and she has the second best XG in the squad behind Viv [0.28] despite having 5th highest XG per shot [0.12]. She only recently overtook Danielle van de Donk and Beth Mead for number of touches inside the opposition penalty area per 90 [8.44] putting her behind only Vivianne Miedema in that respect.

Under Montemurro, Arsenal have a slight ride-sided bias with Lisa Evans supercharging the attack down that flank. Right-backs Evans and Leonie Maier average the highest number of passes in the final third per 90. Nobbs is 3rd in that particular metric. This is no coincidence, Nobbs favours the right half-space with Miedema often drifting off towards the left hand-side.

The link-up between Jordan and the right full-back is crucial. It’s not just Nobbs’ goal threat that makes her such an effective player but her creative game too. Again, all of her creative metrics started to rise markedly shortly before the termination of the league. She is joint second for assist frequency in the Arsenal squad, equalling Lisa Evans’ tally of 0.25 assists per 90.

Jordan easily tops the charts for key passes, with 1.97 per 90 and these all stem from open play. She is also top in the squad for the ‘XG build-up’ metric, which measures the number of moves a player is involved in that lead to a shot on goal. Jordan has always been a proactive, forward thinking player, when she receives the ball in midfield she thinks quickly about the best way to get it forward, as demonstrated by the pass that leads to Kim Little’s goal away at Spurs in November.

Jordan’s calmness and technique in the final third has also been notable. The Gunners favour short corner routines under Joe Montemurro. Kim Little’s famous tiki-taka effort from a short corner at Reading owed a lot to Jordan’s soft feet and presence of mind in the area. Likewise, Beth Mead’s thunderous strike from a short corner against Charlton in the Conti Cup was preceded by a cushioned lay-off from Jordan. Nobbs almost put the finishing touch to a smart short-corner routine in the victory over Manchester City in October.

Forgot about this, could’ve been a worldie pic.twitter.com/Das8k69dEs

However, what is noticeable this season is that her physical numbers are down which, again, is to be expected given her return from a serious injury. Danielle van de Donk, Beth Mead, Vivianne Miedema and Jill Roord all notably press opponents more regularly. Previously, Nobbs has been considered a very valuable part of the way Arsenal pressure opponents in possession.

Whether this is a natural tailing off for fitness reasons or a conscious attempt to manage her return from injury is open to speculation, but given the number of her teammates that can press effectively it hasn’t been a huge loss to the unit. Her increased attacking output has been a huge plus, however and she was trending towards rediscovering her autumn 2018 form prior to lockdown.

Jordan finished the season with the second highest scoring contribution per game in the Arsenal squad. She provided goals and assists at a rate of 0.66 per 90 from an XG and XG assisted of 0.46. That’s two goals in every three games that she either provides or scores herself. It’s not quite at the 1.25 direct goal contributions per 90 she managed in the first eight games of 2018-19 but it was headed in that direction. 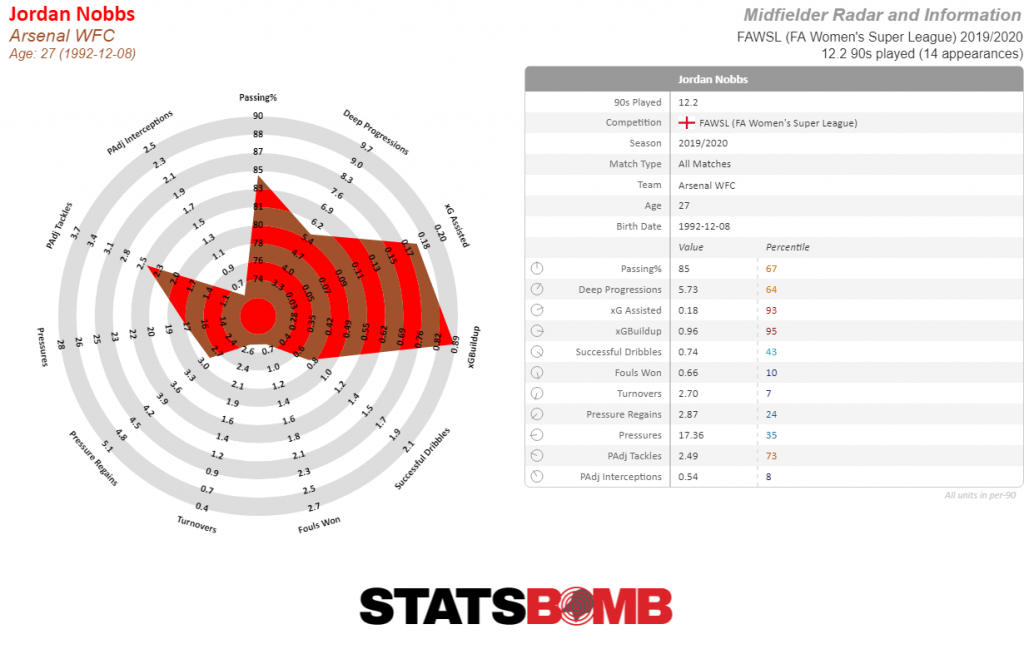 I am sorry? I am not seeing the word GOAT written anywhere in this article. Please do make the amendments.

Also honestly what an amazing player and character. She is exactly what we are missing in the men’s team. A leader and a goalscorer from mid to say the least. Captain Nobbs ♥️

Jordan Nobbs. A wonderful footballer and like so many in this team, a modest lovely human being.
???

When you lay it out like that, it’s astonishing. No wonder Joe always looks so chilled. We are so lucky with our players.