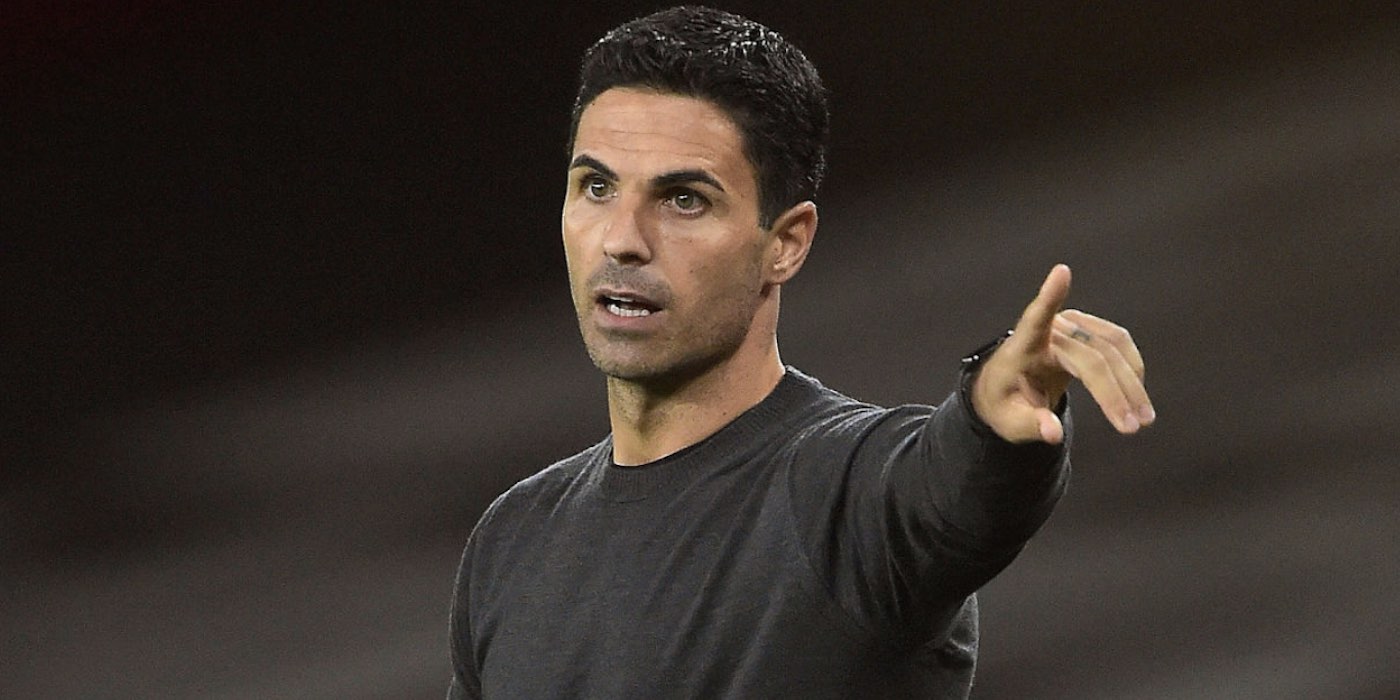 Mikel Arteta downplayed suggestions last night that Arsenal were in real need of midfield signings, but said that as long as the transfer window remained open, the club would explore the possibility of doing deals.

The manager pulled no punches about the collective performance following the 2-1 win over West Ham, but understandably wouldn’t be drawn into criticism of individuals.

When it was put to him that midfield was in need of reinforcement after Dani Ceballos and Granit Xhaka struggled, he said, “No, I think they’ve been really good since I joined the club.

“Not only then but also this season, he deserved to play again today but I just wanted to rotate.

“I thought it was a game where we were going to attack the spaces and the way they defended, we wanted to create some situations with Dani there but if we can strengthen the team then we’re going to try and do that.

“Until the market is gone, everything is still open.”

Pressed again on whether central midfield is an area he’s looking at, with continued links to Lyon’s Houssem Aouar and Atletico Madrid’s Thomas Partey, he continued, “Well, depending on what happens with some other players … as I say again, we are open to discussions, the market can surprise us.

“Teams can come for any of our players in different positions and we have to react, like it happened with Emi.

“So let’s see what happens.”

As he said regarding a potential new deal for Alex Lacazette, “We have a lot of things still to do in this market and at the moment we are focusing on those things.”

This stuff could really go down to the wire during this transfer period, so let’s hold tight and see what happens.

Last night I had a fear Arteta might be seen in same glasses as Ole at United winning against big teams but not against the other average opposition. As a fan I can clearly see how much of a difference he has brought in this side and the hope that comes with it. Though he is not be blamed if we have such an average midfield who are good to sit and absord pressure but very average in creating chances. Arsene had luxury of creative midfielders and he lacked defence. Arteta has almost opposite but we can still see the… Read more »

I must say, I’m a little surprised at fans quick u turn on Xhaka and Ceballos after one tricky game. They were constantly outnumbered and had Kolasinac as a supporting player.

I’m not saying we don’t need to strengthen in CM but when Ceballos and Xhaka have put in such incredible performances of late, it seems a little harsh to dismiss them after one game.

We did also win the game, in case anyone had forgotten.

Incredible performances “of late” and “need to strengthen”.

Arteta’s formation and tactics are designed to simplify everyone’s job on the pitch except the front 3. When the midfield and defense look that bad its because they are not good enough to even execute simple tactics consistently.

Tell that to Tierney who plays in a back three when defending but joins the midfield as a LCM when attacking. Or Saka who played as a LWF with the ball and a LWB without.

Maybe Arteta got it a bit wrong yesterday and obviously individual performances weren’t great from anyone but we can’t play exceptionally every game. And when we play bad but win, let’s maybe not throw the baby out with the bath water.

There not backing him because they backed that waster emery last year. The club don’t obviously have the money. But if that tight cu#t Stan put his hand in his pocket we could have 2 excellent midfielder.

Wouldn’t be popular but if a good offer comes in for Xhaka, it would be good to cash in and upgrade.

Are we not extremely short in the area anyways? With Xhaka being one of the starters, he needs to stay but we need a creative mf in addition to what we have.

He would be more “saleable” than previously because of his improved form – the Martinez syndrome – but whether Arteta would have him at the top of the offload list is another matter. That said, things seem to have gone quite around a few other players that were “near” to leaving according to press reports and we’ve got to get money in to re-invest.

If we fail to land a creative type who can turn in tight spaces like Willian and ceballos we should consider having Willian play there. I think only Saka and ESR have the potential to play that number. It was dreadful watching players take up positions that are not helpful centrally or be denied the ball while in those spaces. Until we learn to create centrally in tight spaces we’ll be over reliant on our fullbacks and strikers to be excessively clinical. We need players connecting with triangles or running with the ball centrally to drag players out of position… Read more »

Yeah I have to say I was slightly surprised by Artetas subs yesterday, I know it may have been a fitness thing but I would’ve thought about subbing Pepe on for Kolasinac, going to a back 4 with Saka at LB and playing Willian behind the striker. I think that could be the kind of option that could change a game for us when things aren’t going so smoothly like yesterday

I think for Arteta to be comfortable switching to a back 4. A midfielder of Partey’s profile is required more than Aouar’s. A player than can challenge for second balls in midfield and prevent the team from being overloaded centrally. If Partey is not possible then Sangaré, Rice or Soumaré. Who ever is cheapest

In that Atletico team, I was very surprised when Manchester City went for Rodrigo over Partey. Even Saul is arguably better defensively than Rodrigo. Rodrigo cost City quite a few games last season.

Frank
Reply to  Salibaba and the Forty Thieves

Parteys also got one of the best midfield take on records in the top 5 leagues. Could be very useful to have someone who can drive through midfield like that

Given the market situation and reluctance towards spending by other clubs as well, we could need one or two more transfer windows to sort out all our concerns for the long term.

Where we stand right now is a good start and let’s hope for the best possible output!

Kreonke, now would be a good time to invest a hundred mil into the squad if you are looking for a quick result.

Don’t hold your breath for Silent Stan. What shred of evidence is there that he’s going to put additional funds in? I think we’re going to have to (finally) come to terms with reality about this and say as far as finances are concerned, we’re on our own. Unfortunate, but there it is.

Help us out we are pleading, do us this favour and move on with your carriers for everyone good??

pepe is a flop

The truth is we don’t stand a snowball in Hell’s chance of offloading all those players you’ve listed (for fees anyway) in this window. Take Chambers – most people would agree an expensive flop since joining us. Newcastle were supposed to be interested in buying him (around £12million – which we’d certainly take) but now are talking only about a loan at best. Other “deals” have gone quiet as well – Kolasinac,Torriera, Sokratis etc. I doubt we’ll shift more than a (small) handful by early October.

Chambers was our best defender before he got injured

I’m talking about since joining us way back in 2014. Overall, he’s been a great (and reasonably expensive – £16million for a youngster) disappointment. Also, I’m sure Arteta knows all about his strengths and weaknesses and, if so, why is he happy to sell him (if he can)?

Well athletico Madrid supposedly like Laca and we like partey, so a swap deal? Then ship torreria and maybe one more to help pay for Aouar?

Swaps are so tricky to pull off though – all sorts of factors, wages, add-ons, length of contract, agent’s fees blah, blah, blah need to be agreed on. Never say never, but it’s unlikely I think. As for shipping out Torreria, yes there was supposed to be something cooking but that’s gone quiet. If only doing it was as easy as saying it! He may go in this window but it could be right up to the deadline and, possibly, not on the terms reported earlier in the month.

Then we have another problem, we will have to replace Láca then because as much I like nketiah he is far from finished article. Why all hate for Láca? I think he’s going have a big season for us.

If you look witch club that´s spending money, then is only a few clubs. It seams that with the situation in the world clubs don´t have the funds to buy players. We need too make some sale, but all the offers is almost only loan´s with obligation to buy after the season.

Assuming no signings, if we played a back four could we have Saka or William through the centre?

we need to go to a back 4but xhaka wont fit into a midfield 3 as not mobile enough and we dont have a decent holding midfielder to anchor the midfield. elneny probably the best option in the squad at the moment.

Fair enough, what else could he have said really? There’s time left but we do need to start shifting players out. As usual, lots (and lots) of speculation but little action other than Martinez – and the money for him is cancelled out – and more – by Gabriel’s transfer in. I doubt we’ll bring in anyone (for a reasonable fee) without being pretty sure we can offload a player or two in this window.

Why is the money cancelled out? So your saying arteta wasn’t giving any transfer budget this year?

the club should have some money to spend on transfers. this horseshit about how we have no money is getting old really fast. ever other team in the league can spend on players even teams in the bottom half stop talking nonsense

Had Leno’s spillage led to a West Ham goal there would have been plenty more questions. Especially given Emi’s near flawless run. And though I agree with the sentiment I think the decision was as much about expediency as anything else. We had 2 great goalies and a need for cash. Emi had a desire to be no.1 and a willingness to leave to get it. Sadly for Emi fans the numbers simply added up. Glad as I am that the error didn’t cost us, I’m more glad Leno didn’t bugger his neck. An injury there now potentially forces us… Read more »

Interesting debating point but we have to go with what we’ve got. Martinez was sold because his value increased due to his very good recent form. If he’d been merely “OK” when he took over from Leno we certainly wouldn’t have got the reported £20million. It was down to money and the calculation that Leno would be as good/better overall – now, that may/may not be the case but … .

I think everything IS open. a) we need to generate some more sales to afford Aouar even. we cannot afford anyone-else with him. BUT we already spent (Worth reminding media) 20m on Pepe and Saliba plus 24m on Mangalahes. That’s 44m. b) we need to sell Torreira at 22m with as much up front. BUT we can also release Kolasinac (Or AMN). The latter preferable to keep since he is younger but in truth there’s not much between them with the Bosniak slightly better but rusty. Hopefully either will hit the 12m mark. That will take us with Martinez sale… Read more »