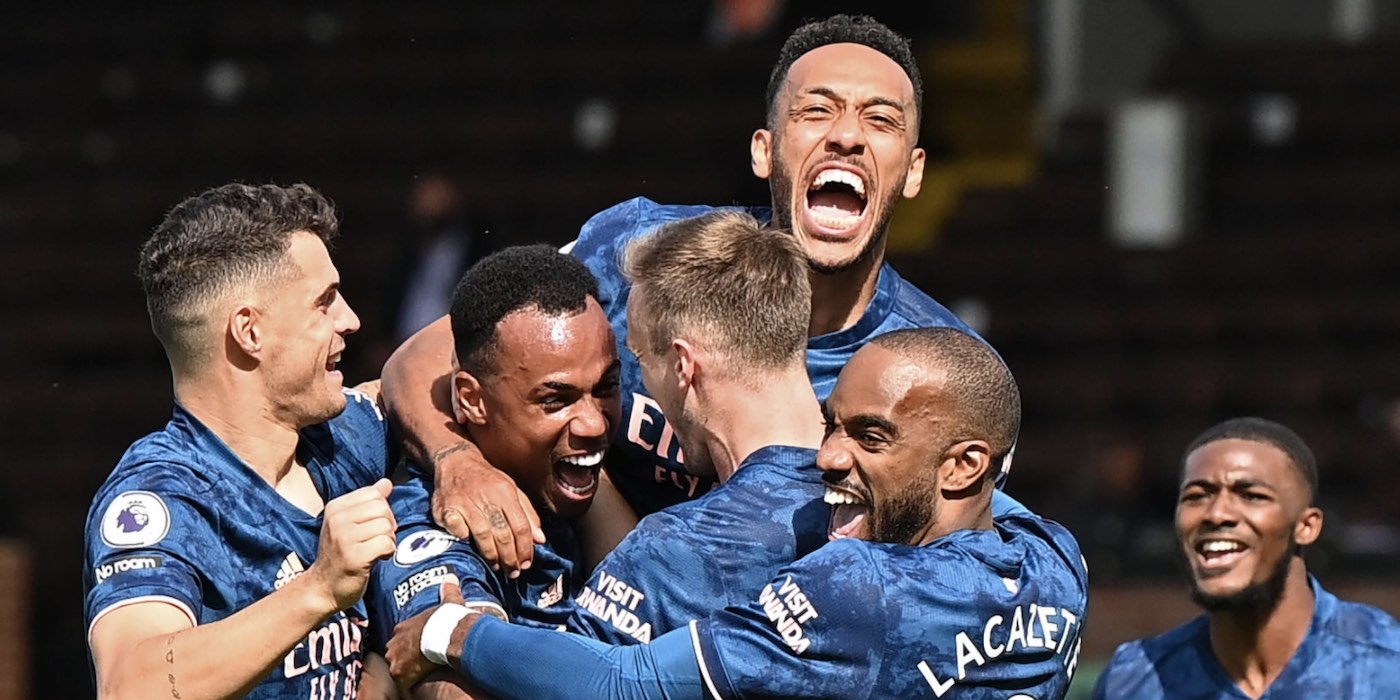 As Arsenal prepare for a visit to champions Liverpool on Monday night, discussion of Mikel Arteta’s tactics has come to the fore. In the games before lockdown, he played with a back four before transitioning to a back three. Against big teams, Arsenal’s performance have been based on a low rate of possession and a counter-attacking style.

Even with the team looking to play out from the back, it looks and feels different from the classic possession style made popular by Arsene Wenger. The game-plans, however, have born fruit for Arteta and he is not too fussed about style as long as it brings results and suits the players he has in the team.

“At the end of the day, I’m here to win,” he said. “I’m here to find ways to do it. If I’m proposing something very difficult, it is going to expose our team right now and I don’t think it’s in the best favour of the club and the players.

“So every game is different, the players you have available can change your game plans and we have to be able to adapt. I think one way now in football, it doesn’t work unless you are very superior to the opponents all the time,” said Arteta who wants to take a flexible approach each game.

His outlook on playing with three defenders also outlines fluidity in tactics.

“It is three at the back in certain moments,” said the Arsenal boss.

“In certain short spaces of the game, it is not all the time three at the back. Either (three at the back) or four at the back, I have the versatility to play, use players in different positions, and to cause problems to the opponent.

“And some of the time, we have to adapt to what they do and to be more efficient.”

His tactical approach and man management have visibly improved results and the team’s confidence to perform against the big teams, something Arsenal have always struggled to do.

“Results are always driving belief. The plan that we’re trying to put for the player, they have to be comfortable with that. They have to realise that now, we can achieve what we want.

“I think they will feel more secure (because) they will know what to expect and what is going to happen,” he said.

With the core of the team having adapted and bought into Arteta’s ways, one can only imagine that Arteta will find new and exciting ways to get the best out of the players.

Arteta looking for Arsenal to play out from the back more

Arteta: We can’t be tactically predictable

Undoubtedly, we look a refreshingly changed team specially against superior teams. For the first time in over a decade we actually try to negate oppositions strengths rather than playing same style irrespective of the opposition. To get any points against Liverpool would be great result though but we shouldn’t be too disappointed with a defeat as long as margin is not too big. Games against Chelsea, Spurs, United, Leicester and possibly Everton would be a better test.

Just watched our last few games against the big teams….and realised Martinez was in superb form with some magnificent saves! Leno, a Draw is the minimum for tmrw.

He is one hell of a coach, no doubt about that, evident in the fact that in a very short space of time in a short career, he has managed to win the respect of fans, media and even critics which we all know is difficult for veteran coaches, bever mind a rookie

Agreed, there is something about him, the clarity of message, the way he holds himself, and the way the players and the club are reacting to him. Long may he stay and help us improve.

Anyone else hoping he turns us into the Atletico of the Premier League? Just a bunch of nasty, battle-hardened, bastards that are a nightmare to beat. Wouldn’t it be fun to watch us score against City and Pool and Spurs and Chelsea and just sit back safe in the knowledge we’d probably win.

No that would be a sad football match, a sore tooth to the eyes, some pack the bus shit. We absolutely do not want that nonsense. Fair we enjoy winning but we also enjoy winning beautifully the Arsenal way.

If you watch Atletico they also play some wonderful football. They’re just a nightmare to play against. Much as I despise them, I think Arteta is aiming for a Chelsea 04/05 sort of blueprint moreso than any of Wenger’s Arsenal teams. And I think that’s pragmatic and our best chance of success right now.

Salibaba and the Forty Thieves
Reply to  mjc1892

If you mean the extreme fitness levels the Atletico players have. Absolutely! If you mean score 1/2 then defend and hack the opponent for the remainder of the match, No! Arsenal would never be able to get away with half the stuff Atletico get away with. However, Arsenal supporters won’t admit it but that’s sort of where we’re heading and I don’t blame Arteta one-bit. The financial gap between us and the top two is just too much for us to get the personnel that can match their playing styles right now. As an aside, if Arteta turned Arsenal into… Read more »

I know everyone’s a critic and I am too, but you lost it when you put Mustafi and Xhaka in the same “hack the opponent for the remainder of the match” team. Are you sure you want us to play games with 9 players?

Haha fair enough. It’s not my Dream XI but a 1st team that I believe is suited to Atletico’s playing style based on the players we have in our squad currently. Xhaka is Arsenal’s dirtiest player by far and he wasn’t sent off once last season. Part of Atletico’s defending is “dark arts”. How many times have you seen Xhaka time-wasting or fall on an opponent when the ref was looking???? Mustafi is a joker but he is Arsenal’s best header by a considerable margin. Atletico’s low defensive block sees as much aerial bombardment as a war-torn city. ¿So Mumbai… Read more »

For shithousery alone, I would put Holding in. I know he is rather unpopular around these parts, but hark back to the 2017 FA Cup Final and his marshalling of the bearded Atletico y Chelsea cunt. Puts in a few more snide fouls before being carded, compared to Shkodran “Slider” Mustafi (less sliding under Arteta, but still). Midfield is a default setting, but would rather have Martinelli/Willian in first, to help score, then Xhaka subbed in for the Brazilian.

There’s not much one could change really to match Atletico in your lineup, but since we are playing FM in the comments…

Wenger's Apprentice
Reply to  Salibaba and the Forty Thieves

Why the downvotes. I think about it every time I watch us play. Arteta is more Simeone or Moyes than Wenger or Pep and I mean it in a good way. I don’t know how to explain it but I feel like he must have learnt how not to play against the big teams haven been part of AW team that lost those big matches with heavy scorelines and even part of Pep staff that lost those matches to Klopp. And that is why I believe we won’t be on the loosing side today. He got Klopp number

Salibaba and the Forty Thieves
Reply to  Wenger's Apprentice

I think the downvotes might be due to my starting line-up which is fair?.

I completely agree with everything you said. Those crazy scorelines were what I hated most about Wenger’s reign. Especially as I often had to go to school a few days later and listen to a barrage of insults. Even the teachers would get join in?

I watched “that match” live as a kid all those years ago. Miraculously somehow I didn’t break my screen when Szczesny didn’t dive for either of those free-kicks.

No way.. Sitting back on 1-0 leads are not something we’re good at. Ref: we topped in points lost from winning positions last season (including the time Mikel has been here).

(RE: Sitting back on 1-0 leads are not something we’re good at. ) Right now it is actually the only thing we are good at. We don’t have the midfield to dominate and play glorious football like years of old, we don’t have the midfield that can drive the ball through the middle of the pitch. So instead Mikel is optimising what this squad can offer. Structure. Counter-attacks. Advanced tactics. It is working against big teams (probably won’t continue forever), but we still struggle against mid-to-lower table teams. Until we upgrade midfield this HAS to be our identity. Arteta has done… Read more »

Thanks for the article Hatta, helps calm my nerves for the liverpool. It must be closer to midday over there.

All I ask of the guys is to not get whitewashed in either of the games and compete admirably. It will be very important to nullify their fullbacks as they’re very key to Liverpool’s gameplay.

I genuinely wonder how the team is going to train. Will they remain in Liverpool or travel back down before the 2nd game.

Hatta Aziz
Author
Reply to  Salibaba and the Forty Thieves

Wicked name btw. I think the positive thing about Arteta’s team is that they’re always competitive and are almost never whitewashed. That’s all we demand of the team.

How and where they’re going to train is interesting too. Having them stay in a hotel on Mon night would definitely help with recovery the next day though it might mess up their training schedule. I’m always in favour of rest and recovery.

When the fixtures came out I said half tongue in cheek, half seriously, that they may aswel book themselves a nice spa hotel and hang around for a few days and relax and train up there… Probably with our financial woes we could only manage a set twin rooms in the local travelodge and a kick about in Stanley Park.

The main thing we have to remember as fans is to temper our expectations. One can be confident that we won’t be swept away like a mildly irritating mosquito (or a carcass of one, like last season), but it would probably be a stretch to expect an encore of last season’s game. That would be counting on non-existent complacency on the part of Liverpool, Leeds game aside.

Arteta’s pragmatism is music to my ears. Even the best coaches insist on a specific style of play, even when they do not have the players to do so. Arteta possibly has a preferred style, he’d ultimately like to play attractive football, manifested for example in what has become our trademark goal, with the team passing out from the right and then a diagonal ball to Auba who signs it off with aplomb, but at the same time he’s okay with us sitting back, even against teams like West Ham, etc, and breaking in phases, using our pace to outdo… Read more »