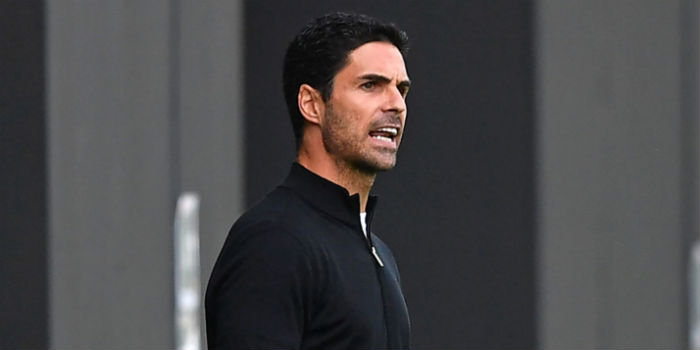 Mikel Arteta takes his Arsenal side to Anfield for the first time, buoyed by two consecutive victories over Liverpool.

The Gunners beat the Mugsmashers 2-1 in the Premier League at the Emirates after the lockdown, and won a penalty shoot-out to take the Community Shield last month.

However, the Arsenal boss is under no illusions as to how strong Jurgen Klopp’s side are, and the need for his team to produce a performance on the night.

“We know the standards that they have set in this league, how consistent they have been and that is because they dominate almost every aspect of the game.

“So we need to be at our best, we need to compete really well against this team and hopefully the boys are able to do that on Monday.

“They have some variability depending on what they do, how we have to control those aspects, how we can attack in different ways as well.

“It is like quick waves all the time with them, without much time to breathe. It is a really quick game, it doesn’t see long sequences of passes against them.

It’s fair to say that we weren’t necessarily at our best in the league game, taking advantage of uncharacteristic errors by Liverpool, and we might need a bit of that again as we get ready for two trips to Anfield in a matter of days.

After Monday, we return on Thursday for a Carabao Cup 4th round tie, and that is a complication according to Arteta.

“It is normally difficult enough to play the same team in four days and for the players as well to adapt,” he said.

“Obviously, the first game has a big impact on the second one and it is really tough to beat the same opponent twice in that short period. When you talk about Liverpool that challenge is much bigger but I just want to focus on Monday.

“Let’s try to get the best possible preparation against them, go there, and most importantly have the belief that we can go there and win.

“We all have to believe that we are capable of doing that.”

“If we don’t believe we can do it, then we have no chance at all”.

If we win this game, let’s not get carried away and start talking about winning the league.
The game being played on a Monday instead of Saturday hopefully gives Tierney a fighting chance to make this one.
Presumably Leno, Bellerin, Holding, Luiz, Gabriel, Tierney, Xhaka, Ceballos, Willian, Lacazette, Aubameyang.

Let’s face it, if we win the game it will be a big upset – the biggest for quite a while in the PL. I don’t see it happening and a point is the best we can hope for really. Personally, I don’t think we stand a chance of winning the PL this season, even if we were to snatch an unexpected victory at Anfield. We still lack the quality and strength in depth across the squad, and there are still too many passengers. I suspect Arteta, being a realist, will be aiming for an automatic Europa League place, preferably… Read more »

With you till the point you said we have issues and too many passengers in the squad.

Supporters of most clubs, usually start the season with some hope, especially when the window is open.

Particularly at Arsenal, its still early but we finally seem to going in the right direction after a long time (even accounting for the big Wenger fan that I’m). No one expected any trophy at the end of last season.

Its too early to say ‘the best Arsenal can hope for this season’ or ‘Arsenal are title contenders’, lets enjoy the ride.

I’d much prefer Pepe to Willian. his last 2 outings have been disappointing and you need someone less predictable.

?its a tough ask, they are not current oremier league champion and former top team in Europe for nothing, they are a very goid team. So its difficult enough for any team to go there and win, when you add on the fact that we have beaten them twice on the trot, you know their tails will be up. However, the upside for us is that will also give our boys confidence that they can beat them, so it will be an interesting game for sure. My heart says we can do it, but my head says it will be… Read more »

Damn right! We have to be at our best to beat that lot. But for the first time in so many years I’m quietly confident that we can get two positive results. The trauma of heavy and downright demoralizing defeats to the mugsmashers seems to have been banished by Mikel

I believe! I don’t care what Liverpool has done, they got beat on the last 2 encounters between us so they’ll be well aware of what we can bring to the pitch. If we can be solid at the back, then we can nick this. A win first and and then a loss with rotated team would be great cuz 2 wins is maybe being greedy lol I have to say tho, they have added instant quality in depth with Jota and Alcantara to what was already a half decent front 3 or 4.
Should be an interesting one!

Going in a much better frame of mind than recently. Which i believe is a good thing. Damn good thing indeed!

Bring on the Kops!

That’s very true. If we play anything like we did against West Ham, Liverpool will get the points as sure as eggs is eggs, as they used to say. Our stand-ins weren’t very encouraging against Leicester either, so everyone will have to pull their collective finger out or it will be a very disappointing outcome.

We won both those games. West Ham we weren’t great but dug out a win. Leicester are a decent outfit and we outclassed them.
The team really work hard for Arteta, for each other, and for us. If we lose it won’t be due to lack of effort.

No sweat if we lose both these games. What matters is to see the fight, organisation defensively and ability to create opportunities.

It was really important to win the first two games to negate a bad result at Anfield which is expected.

Totally expecting to lose but a point would be very welcome. I don’t see us getting a win but just a good performance so as not too ruin the confidence we are slowly building.

I want to see Saliba!!

If their game against Leeds is anything to go by, then we can beat them at Anfield.

Play a 352. Completely unbalance them while flooding the midfield