I wasn’t 100 percent sure if I should do a post on Dani Ceballos because he did play for Arsenal last season but in the end, it is still a player coming into Arsenal. I do wish that this was a permanent move but if the alternative was him playing for another team, I will gladly make that trade-off. 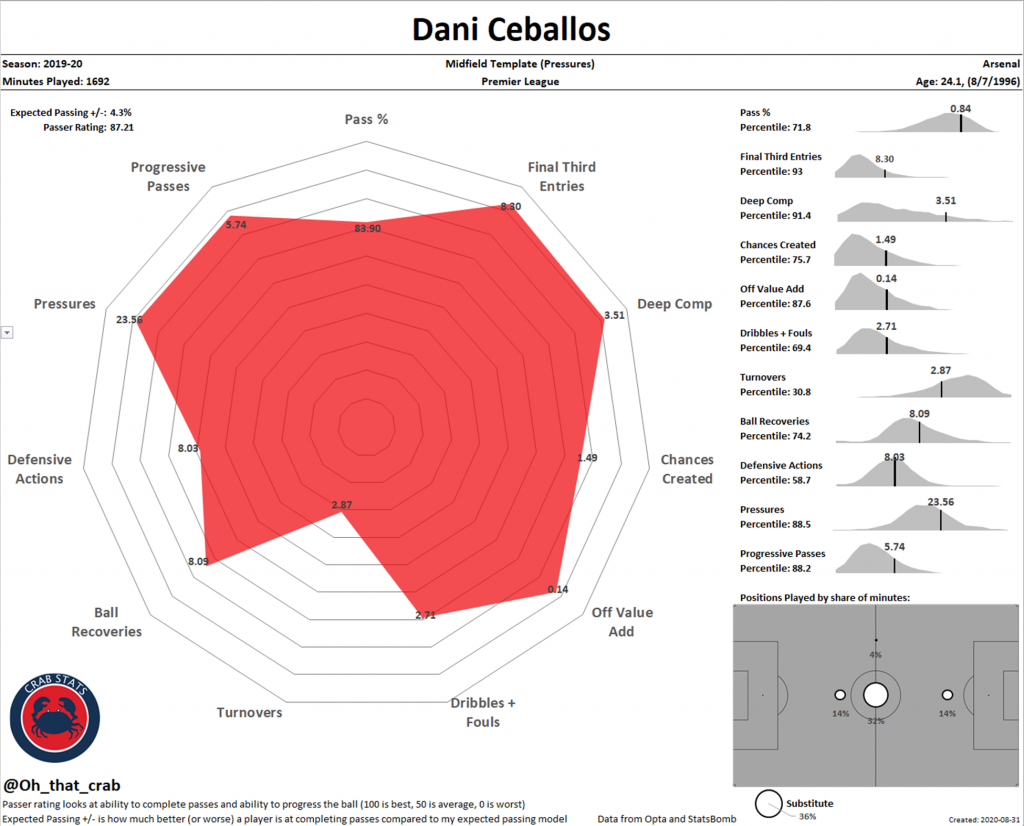 Dani Ceballos: By the numbers

Looking at his attacking numbers and how he played at Arsenal last season what sticks out to me is that for the most part, he isn’t the one to provide the final ball or to get on the end of moves, with just 1.5 open play shot and key pass per 90

His creative numbers, while not elite, were among the best on an Arsenal team that was sorely missing players who could provide the final ball. How that might change next season really depends a lot on the role that he is asked to play and the formation that Mikel Arteta settles on. If the end of the season is any indication, Ceballos could be asked to take on a deeper role meaning that he connecting play will be more important (and probably better match his skills) for Arsenal.

xTurnovers – 2.37 per 90, 0.4 less turnovers than expected (you can read more about the xTurnovers metric here) 55th percentile, rank 203

These are the skills that Ceballos has that makes me appreciate him and why I so badly wanted him back at Arsenal. Ceballos isn’t creative in the classic usage for describing a footballer, but he uses his creativity in a deeper role to rank very highly in his ability to progress the ball.

His passing is good, but probably a step below elite levels. I think that this is something that he could see improvement in this season as Arsenal develop a (hopefully) better attacking and buildup structure.

Looking at the stats above might not at first glance look too impressive but I think that these are very respectable numbers, especially considering that he played quite a few minutes in a more advanced role under Unai Emery with a smaller defensive responsibility beyond initiating the press.

The numbers don’t suggest that he is the second coming of N’Golo Kante but I think that these look good for a player that will be sharing the responsibility with a partner in the midfield.

I think that Arsenal would be hard-pressed to find a better all-around midfielder that is available in their price range and would be willing to play for Arsenal. Even better, Ceballos has played with this very team and won’t need any time to adapt and should be ready as soon as he is fit.

It doesn’t appear that there is an option or obligation to buy at the end of the year but hopefully, this move continues to work out well for the team and player that can be sorted out without too much worry when the time comes.

Sources: Opta via whoscored and my own database, StatsBomb via FBRef

Getting the extra large size tub is just ecomical. It’s nice to know you won’t run out

Really cool analysis.
Question. Is the turnover data based on raw turn-over numbers or is it adjusted to the number of touches/passes/time in possession for a player. Ceballos is obviously a guy who gets on the ball a lot, thus, is he compared to other players that get on the ball a lot (adjusted turnover data) or all players (raw data)?

Turnovers on the radar are not adjusted for possession and is a raw rate stat. That was one of the reasons for working on xTurnovers to try to balance that. https://www.crabstats.xyz/xturnovers/

Good minds Scottie!! 😉
Amazing analysis there too! It really is great that football is starting to catch up in advanced statistics. Good luck with this. There must be opportunities out there with smart teams, in which hopefully Arsenal still fit!

What about the visual representation of the Turnovers in the radar here: is it in the opposite direction of all other stats (which are shown “more=better”), and a lower number of turnovers would have been shown higher (direction outside) on the radar?
Or the “gulf” that we see there is the good thing?

It is opposite, so more turnovers makes the area smaller.

Ceballos has easily been Xhaka’s best partner and he’ll work in a 3 man midfield if and when Arteta moves in that direction. He’s an extremely hard worker and has a great engine. He’s a smart footballer, and doesn’t get rattled easily. We should make Dani a permanent member of the squad at the end of next season, he gives us a skill set we need badly, and he contrasts well with our other midfielders.

Interesting data. Let’s hope that his (re)loan is sorted out. Even if we can’t make it permanent, his contribution will be important.

Really curious about our midfield next season – if we sign Ceballos, are we then out for Aouar/Thiago/another creative midfielder? And let’s say we sign Partey, or an equivalent, a midfield three of Partey/Xhaka/Ceballos might still face problems creating enough. I really hope we are still in for another midfielder – I think Xhaka has improved massively under Arteta but he frankly isn’t mobile enough to play in a midfield 2 – though he and Ceballos performed admirably in that role when asked to!

Also question for you lot – it seems as though given our financial situation we will only be able to sign one more midfielder (if that) – either a creative type or a more defensive one – who would you rather have? Or do you think there’s another solution?

A creative one has to be the priority. We have Elneny now. He can do a job as a disrupter. We have beaten the best in the PL by playing counter with what we have. What we need is an adventurous, creative AM for the games where we are expecting to make the play. Willian, I don’t know, I just don’t see it, he has played as a winger pretty much all his career. I think we need something more. We will see. Happy to be proven wrong. If Partey comes, and Ceballos, surely Xhaka is on the bench a… Read more »

We do have Ozil. He was looking quite good before the lockdown.

If anybody can get the best out of him it would be Arteta. Might be helpful for the ‘weaker’ opposition who have been giving us problems of late.

Plus we have Willian, Saka, Pepe and a growing collection of players further back who have an eye for a pass.

Obviously some more better players would be nice.

Really great article and thank you for the insight. I would love to see the contrast in Dani’s numbers split between Emery vs Arteta. Based on how Dani performed following the resumption of the league I’d feel we’d see a stark difference.

Would love to have this fella back playing in the red and white. Only concern is the additional loan fee following on from last year…almost feels like we should’ve just stumped up the extra cash and bought him!

There won’t be a loan fee, but we will be paying his full weekly salary with an option to buy him at the end of the season I presume

How the side is set up defensively next season will be key to what demands are made of the midfield. The evidence of the two and a bit games in which Mari (a left-footed centre back)played would show that two at the back with a purely defensive midfielder in front of them would be Arteta’s choice. Only when a left footed CB isn’t available does Tierney get pulled back into a three. If a defensive mid ‘sits’ then the other two (or three) midfielders can all move up the pitch and operate much more like conventional no.8’s (or 10’s). This… Read more »

Really pleased that this deal looks to be completed – but I really really hope some miracles happen and we manage to sign at least 2-3 more fantastic players, I’m worried that with Chelsea’s ridiculous transfer window, United signing van de Beek and possibly both Upamecano and Sancho, City maybe getting bloody Messi, and Liverpool at the level they are already with potential reinforcements in Thiago – the gap between us and them could increase dramatically. At least we’ve got Arteta this season and not emery. Arteta – and I hope I’m not jinxing it – truly feels like he… Read more »

We’ve obviously improved but the others are strengthening, and quite considerably in some cases. I continue to believe that a Top 4 finish is beyond us for this coming season simply because I can’t see enough teams above us failing sufficiently to get us into that position. Logic suggests it’s going to take a tad longer than some Gooners may think – even with Arteta’s input. Not saying we can’t /won’t do it but not in 2020-21, I think.

I hear what you are saying, but teamwork makes up for a lot and we appear to have that in spades now. Don’t let other teams signings worry you too much, it is no guarantee of success.
Saying that, Doherty to spuds was a great signing 🙁
Anyway COYG!

Interesting stuff. Did he play better under Arteta than Emery? Would be interested to see how he changed.

Yes, that’s a good point. Many of our players have improved under Arteta’s guidance – or, possibly, they have begun to play to their true potential with him in charge. Either way, it’s all going swimmingly well.

Anyone know how much it cost us last season in salary/fees for Ceballos?

Ceballos seems a decent sort. Hardworking. Maybe more games to get the measure of what he can really do.

Right now, not convinced. From what he’ shown, he’s isn’t nowhere near the likes of Fabregas, Rosicky, or Cazorla. Or even Wilshere when he was fit. Maybe (I hope) he’ll show us more. Hard to say on this little evidence.

Ceballos was a decent player for Arsenal last season. But this loan signing is treading water, isn’t it? I am hoping for more ins & outs among the midfielders this window, or else I think we are going to be scrapping for another Europa League-place finish this season, without a hope of winning that competition. 5th-6th may be the level of the club’s aspiration.

Whether Arteta plays 2 or 3 in the middle, an elite midfielder is needed to take this squad up a level.

He is a very hard-working technical player who isn’t afraid to. progress the ball from deep while avoiding the opponents press. I really feel he can improve so much more next season with more gam time. He is not a fabregas but he sure puts in a shift.

If loan is confirmed, excellent news. As much as Mangalhes is a positive move, paying 27m for yet another Cback may take away from where we really need to spend which is in midfield. Ceballos new loan hopefully comes with option to buy. For me ideally, we need to have someone to balance him out on the left. Of course I would be elated if we can get Aouar but that may be unlikely given price and suitors and lack of CL… However considering last summer when Sanlehi jumped the gun on Pepe, Lyon were hawking off Fekir for a… Read more »