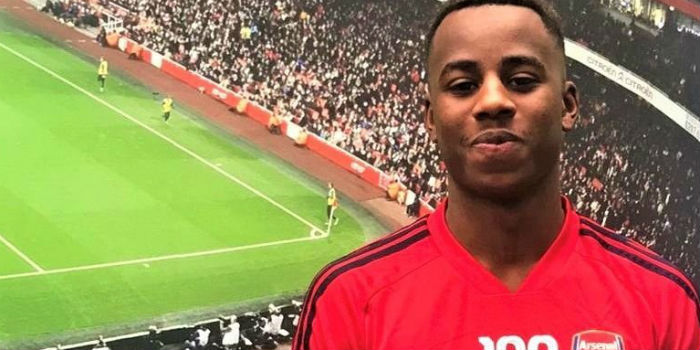 The signing of George Lewis wasn’t exactly a conventional one, with the winger having previously played in the lower leagues in Norway before being taken on trial by Arsenal.

Lewis must have really caught the eye at London Colney, however, and now we are beginning to get an insight into what tempted Arsenal to sign him.

At 20 he is one of the older players in the U23 side, but Lewis has certainly hit the ground running this season, scoring in a friendly against Tottenham Hotspur (which isn’t a bad way to introduce yourself) before striking again in the EFL Trophy against Ipswich Town.

It is far too early to make a full assessment of his capabilities but he certainly seems determined to succeed, with his flair and directness extremely useful assets for the U23s, who don’t have many other options out wide.

Lewis has already received a fleeting taste of first-team action as he featured in the friendly against MK Dons, although he didn’t touch the ball after entering the fray as a late substitute.

If he can continue to impress for the U23s then a first-team callup this season, perhaps in the League Cup or the FA Cup, certainly isn’t out of the question.

For now he will be seeking to build upon his very encouraging start and will know that he still has much to prove in terms of producing consistent performances.

So far, though, things have gone very well indeed for Lewis.

Loan him out come Jan, league two or something, see how he does against some grown ones.

Nah he’s just come from Norway, needs to settle, get game time for U23s and maybe league cup, and give the club the chance to see him up close

I remember the article at the time we signed him. Under 23s team were low on wingers, so they scouted and trialled a 20 year old from Norway, liked what they saw and signed him on a free, maybe with a small compensation. He’s come in with 2 goals in 2 games. Rather than odd, I saw this as a stroke of genius.

Could be a useful weapon bringing him off of the bench in certain games against teams squeezing up on us, League Cup and early Europa rounds might be the perfect stage for his introduction?

We are friendly with spuds? Apparently my whole.life has been a lie..