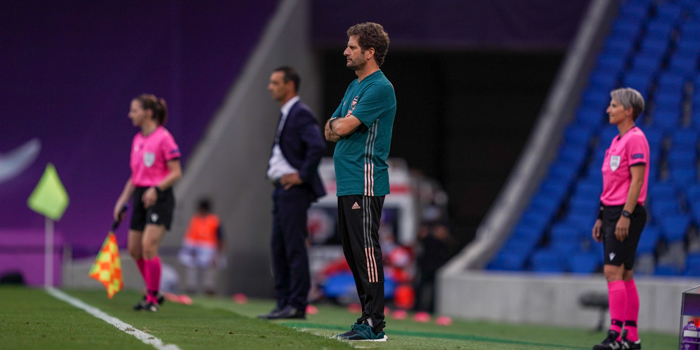 On Lia Wälti, Steph Catley and Jill Roord not being in the squad…
Lia was rested today, that was precautionary but Steph pulled out of training with her calf again; so we are just trying to work out what happened there. We will assess them ahead of Thursday night, we know both will want to play in an FA Cup semi-final. We’ll see how they recover but we have to make decisions not just based on now but we don’t want to overload them and for them to break down in November and December.

Jill got a knock to her knee in the Netherlands game against Russia and she hasn’t recovered as well as we’d hoped. We hope in 2-3 weeks we should have her back on the park playing. [Confirming our information in the match preview]. All the signs are positive that it’s nothing dramatic and we should have her back in a couple of weeks.

On starting with Caitlin Foord and Lisa Evans in the wide forward positions…
We wanted Caitlin to stay nice and high and stay between the centre-back and the full-back and we wanted to put pressure on Tottenham in transition and it also gave Viv the chance to float away from the front line and play a bit lower. We thought we could hurt them in those areas. For Lisa the message was to stay wide and stretch the pitch and lo and behold she scored a hat-trick.

On Lisa Evans scoring a hat-trick, meaning Arsenal have a hat-trick scorer in all three games so far this season…
Yeah, we draw straws in the changing room before the game and decide who gets to score the hat-trick today. No, I’m happy for Lisa she has some great qualities and really excited for her because she’s finding great rhythm, she’s trained so well. We tried to get her coming off from ball side on the opposing flank and she had some excellent movements and scored some excellent goals.

On the performance…
It was always going to be a very tough game today and not just from the Tottenham perspective but we were always going to need to grow into the game because we’ve had a lot of players who have been away. So it was always about balancing the load but knowing when we needed to step the game up but we controlled the rhythm and controlled when we decided to go forward, so I was very pleased especially in the second half when we really started to step it up a gear.

Spurs are a very good team, they press very well and they didn’t allow us to play through the lines in the first half, their midfield four was very tightly connected with their back four and they covered space in behind, so they didn’t allow us to play through and we had to keep dragging lines out. At times in the first half we didn’t have different heights to pull them out, we were pretty flat in the build-up phase. It was just case of allowing the game to get a little bit stretched.

On most of the attacks coming down the right-hand side…
Playing Caitlin Foord on the left allows us to have a second number 9 and for Viv to float a little bit more. We felt we could pull out the left-back and overload with our full-back but also with a midfielder in that area and it worked well, so all credit to all of the players. We didn’t put ourselves in situations where the game got tricky, we had the professionalism to dictate the game and dictate the tempo and decide when we wanted to press and when we wanted to attack.

On the performance of Jordan Nobbs….
Jordan is growing, we have given her different challenges this year. We’ve given her different roles to give us that fluidity and balance that we need. That’s typical Jordan, she’s capable of doing those things and that’s why she’s the player she is. But we had to manage loads as well, the Dutch, Swiss and Austrian girls had tough [international] games and it was good we could rotate and control the tempo.

Team to beat this year!

Was surprised to see tottenham so organized in the 1st half; with BBC annoyingly showing Alex Morgan’s face on bench every 5-10 mins I thought there was going to be a surprise sub and maybe an upset… but amazed to see Lisa Evans score a hat-trick! What a turnaround from her since her abysmal performance against PSG. Looking forward to semi-finals!

Men’s team, Women’s team, it doesn’t matter, Tottenham will always be a level below us. Well done ladies!

It’s always nice to get one (or even four) over our neighbours. The final score doesn’t really tell that this was quite a tight and tough game though. Until Nobbs goal, we found them difficult to break down.

And that’s the tea.

The bbc had Morgan’s face up there for US audience. Spurs kept up for 70 mins, but this team appears too good to hold for 90. Our real test this season will be Chelsea. Great showing.

great game! love how there always this certain dam-breaking moment and the goals flood in. Also Zinsi is such a goalie, love that!
im still trying to figure out how much the gap seems to be with wpl sides in comparison with the german, french and swedish league. swedish and german league are tighter in comparison to the english and french aren’t they?

What do you mean by “tighter”? The standings?

kinda! im able to read tables but often doesnt show the whole picture. i watch the Arsenal, WCL and sometimes FrauenBundeslig. feel like the midtable teams in Germany are more dangerous than in the wpl(aware that in the last 10 yaers they only had 3 champions)

You watched the goal then! Superb vision and technique. If only the person writing the match report for the official Arsenal website could have been bothered. Apparently, Jordan curled one into the top corner from 25 yards! Then they decided to report the next game is vs Bristol on Sunday. Isn’t there a small matter of Man City away before that? Perhaps Arsenal should read Tim’s articles first before uploading rubbish. I note Lotte still hasn’t made an appearance on the squad page and Fran still has no profile listed despite being with us for a couple of years now.… Read more »

Great performance from the team. Lisa’s finishing was first rate.

Thank you BBC for showing the match on a main channel, but

And thank you Tim, as ever, for providing coverage of the women’s team on Arseblog. Did you enjoy your name check by Laura Bassett in the commentary?

I owe Bass a drink for that 🙂

I love that we don’t seem to be taking any prisoners at moment… as soon as we get the breaktrough we make sure to kill teams off. Sp**s played out of their skin, but reward was 4:0 defeat. They worked really hard only to be beat by individual brilliance of Jordan and Viv inside 2 minutes. That Jordan goal is sickkkk and it is getting better everytime I rewatch it. The technique, vision and audacity to even try it in NLD ??. And followed by nutmeg through ball by Viv. And so happy for Lisa, who had to wait for… Read more »

And just to make the victory sweeter, Chelsea knocked out by Everton!

So sad that in order to stop our build up play the Totts committed foul after foul in the first half. sadder still that the Totts female coach described them as by far the better team for 70 minutes. If Alex Morgan thought she was joining a real football club I would think her minds been changed after that display.

Didn’t understand their coaching staff decision. After all the hype of landing Alex Morgan just to leave her shivering on the bench in a cold, wet Boreham Wood to watch her new team sink to a 4-0 defeat. There was no point bringing her on at 4-0 but you would have thought at 1 or 2 nil it may have been worth a try. If she was not ready to play why was she on the bench at all? Did they assume that would intimidate us? Alex is no doubt a good player but all players are only any good… Read more »

Alex Morgan is nowhere ready to play football in WSL at her top level. She hasn’t played over a year, have trained with Spurs max a week. Normal preseason is two months to get players to top condition. At that time Alex is preparing to leave. To put her out in cold wet Boreham Wood against Arsenal to do the job that Ayane did, which is basicly run a lot and press our defenders, is so big injury risk for not fit enough player. Spurs gameplan involved striker whose main job wasn’t score goals, but to stop Arsenal playing from… Read more »

Yes get that totally but what I didn’t understand was naming her as a substitute and getting her to sit there in her playing kit if they had no intention of giving her part of a game.

Marketing.. 🙂 Let’s be honest, this move is mainly about marketing. Can’t fault them for that. Look how much she was talked about, because she was where. Player is making the team relevant in media.

OMG, Jordan Nobbs is the real deal.
Congrats to my ALFC ,looking forward to grabbing all the cups in every competition we participate .

Yes she is and she is still getting better after her ACL lay off.