Arsenal’s unbeaten start the season came to a grinding halt with a 3-1 defeat at Anfield to Liverpool. Mikel Arteta’s men took a somewhat fortunate lead before the champions extended their unbeaten run at home to 61 games with a dominant display.

Let’s delve into the data to see if we can gain some more insights into Monday night’s match. 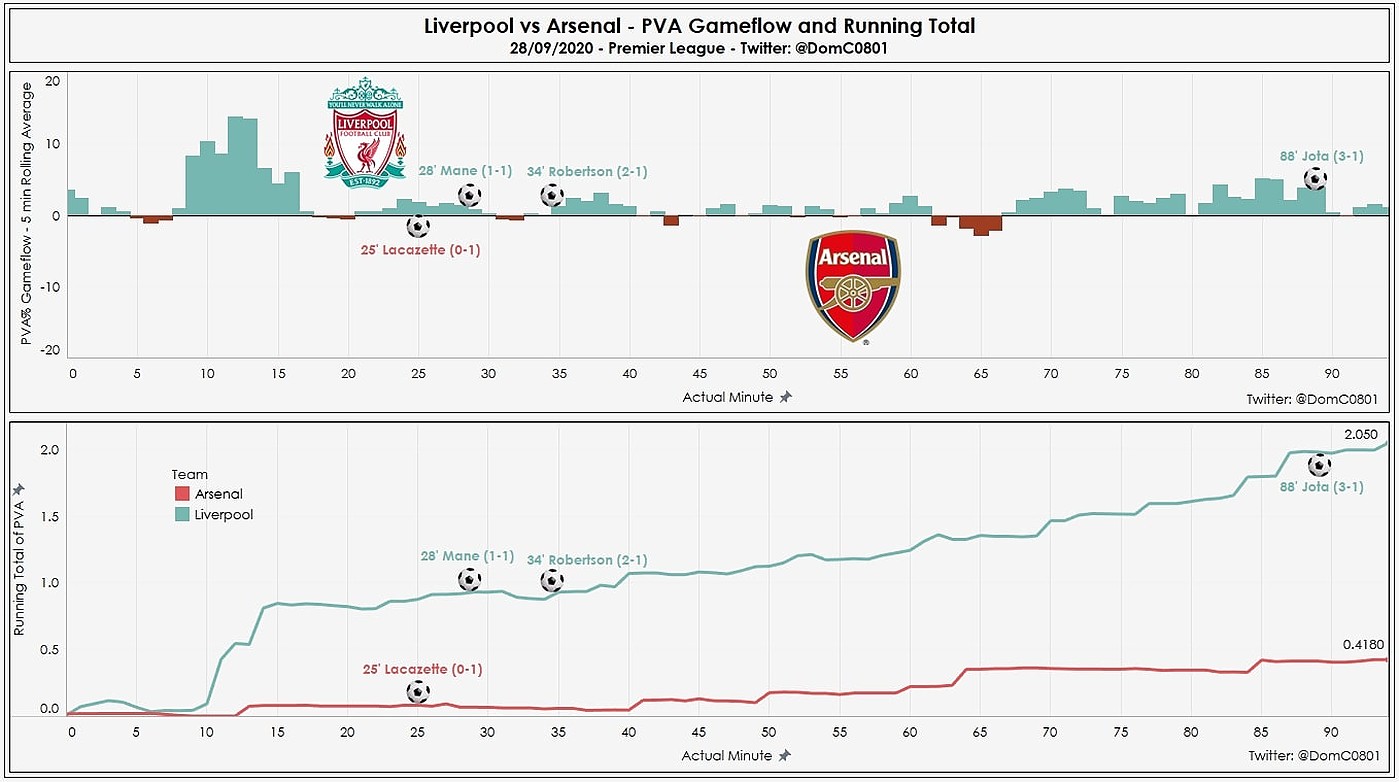 Above are the Possession Value Gameflow (on a 5-minute rolling average) and Cumulative Possession Value charts from Monday’s game. Possession Value Added or PVA measures the increase or decrease in the likelihood of a possession ending in a goal based on the successful passes a team makes. It is essentially a measure of how threatening you are when you have the ball.

As we can see above Liverpool dominated most of the game with Arsenal having one promising period around the 62-66 minute mark (coincidentally right after Ceballos was brought on) but offering little else. In fact Arsenal’s final cumulative Possession Value Added total of 0.418 means that the entirety of Arsenal’s successful passes in the game only increased our chances of scoring by 41.8% (that’s bad!). This highlights Liverpool’s dominance and also how effectively they nullified Arsenal’s attempts to progress the ball to dangerous areas. 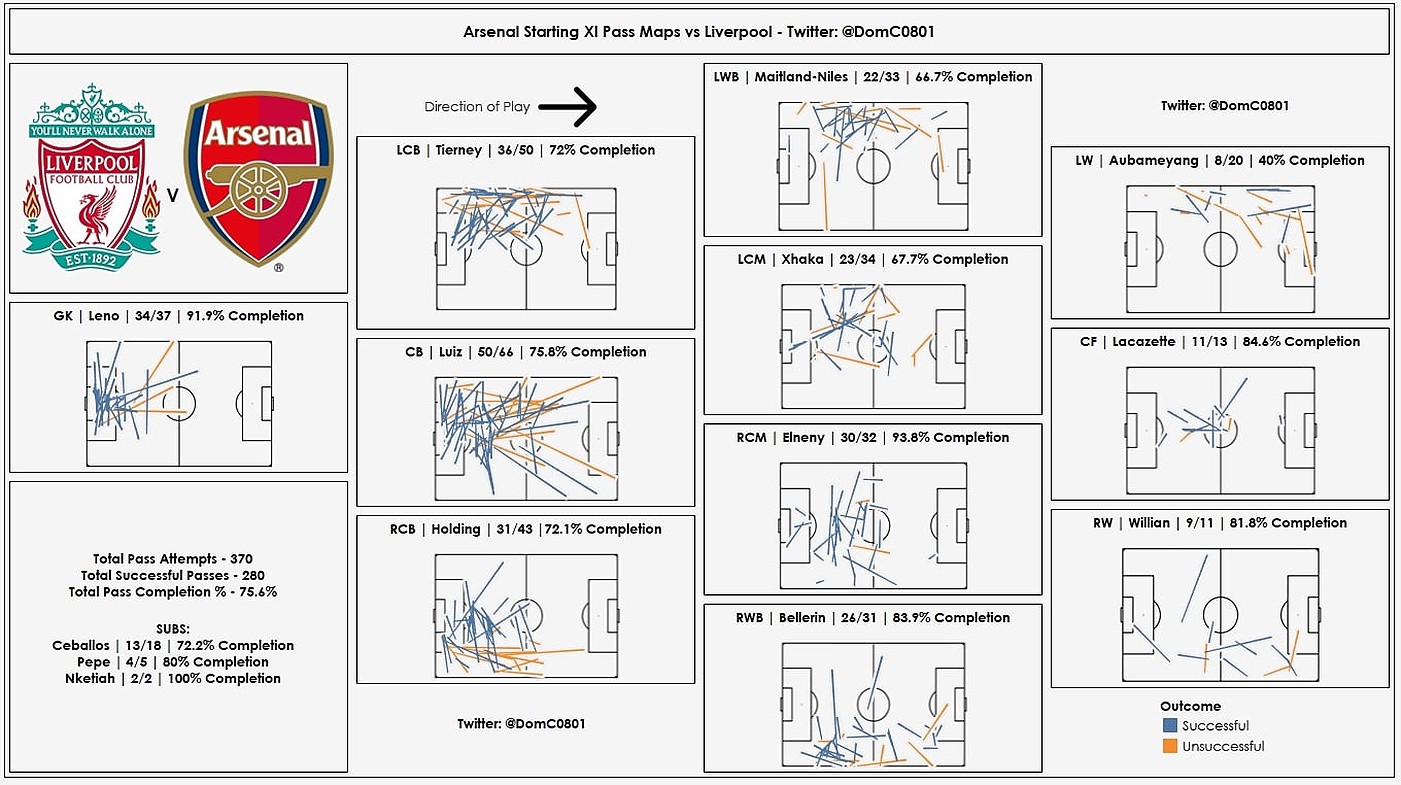 Above are the Pass Maps for all of Arsenal’s starting XI. What we can see is a massive disconnect between the midfield (including the Wing-Backs) and the Front 3. The lack of forward passing from Arsenal’s starting double pivot was massively worrying, with Scott noting in his By The Numbers piece that between the pair they managed only 1 Progressive Pass from 66 combined Pass Attempts. To further Scott’s point, of Elneny’s 30 completed passes, 20 went backwards and of Xhaka’s 23 completed passes, 14 went backwards.

This lack of forward passing is definitely influenced by the amazing Liverpool press (74 attempted pressures in the Arsenal 3rd), but nonetheless you would expect Arsenal’s starting midfielders to be able to put us on the front foot. Also worrying is the lack of touches for our front 3, with Lacazette, Aubameyang and Willian combining for less completed passes (28) than Bernd Leno in goals(34). Even if we add in the two attacking subs Nketiah and Pepe, the combined pass totals for our Front 3 and their replacements is the same as Leno (34). 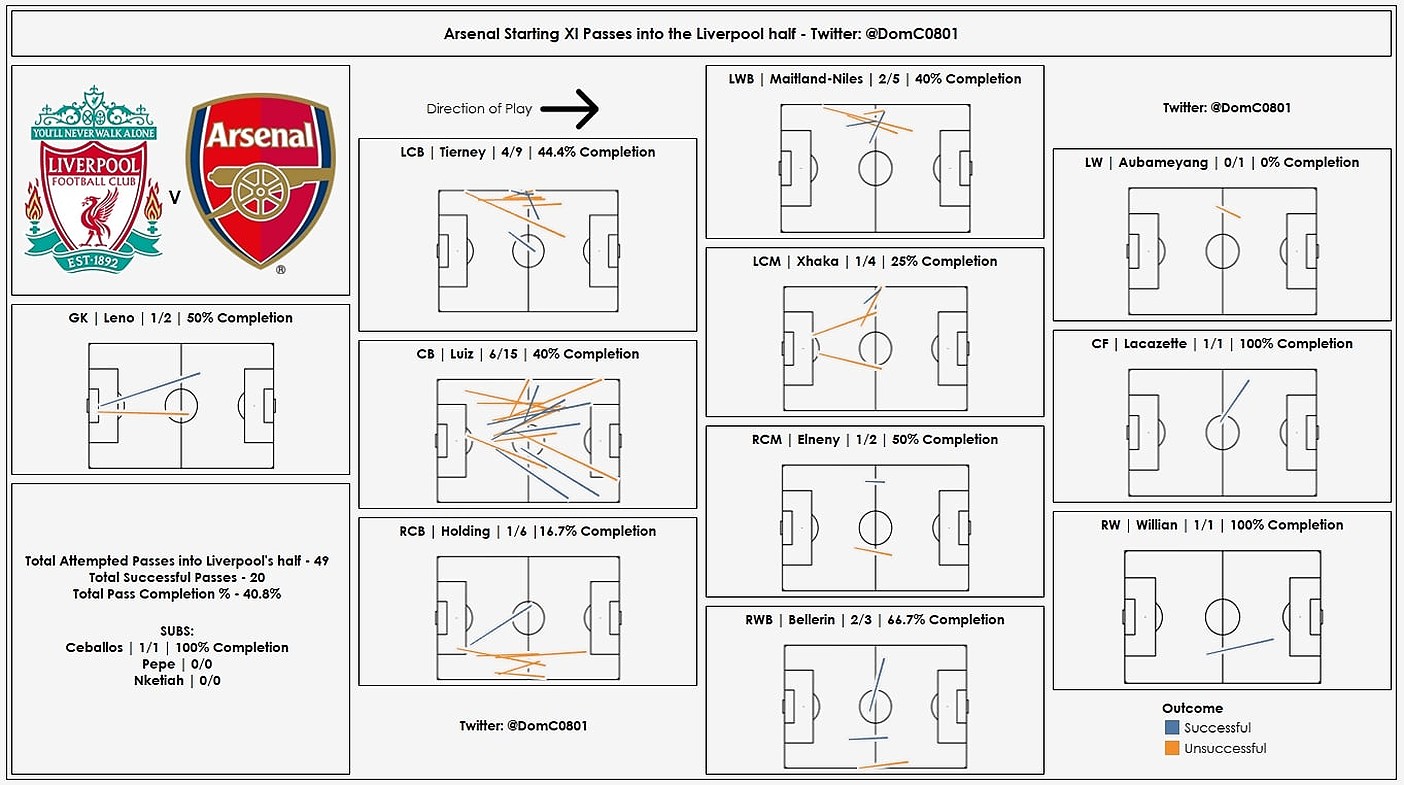 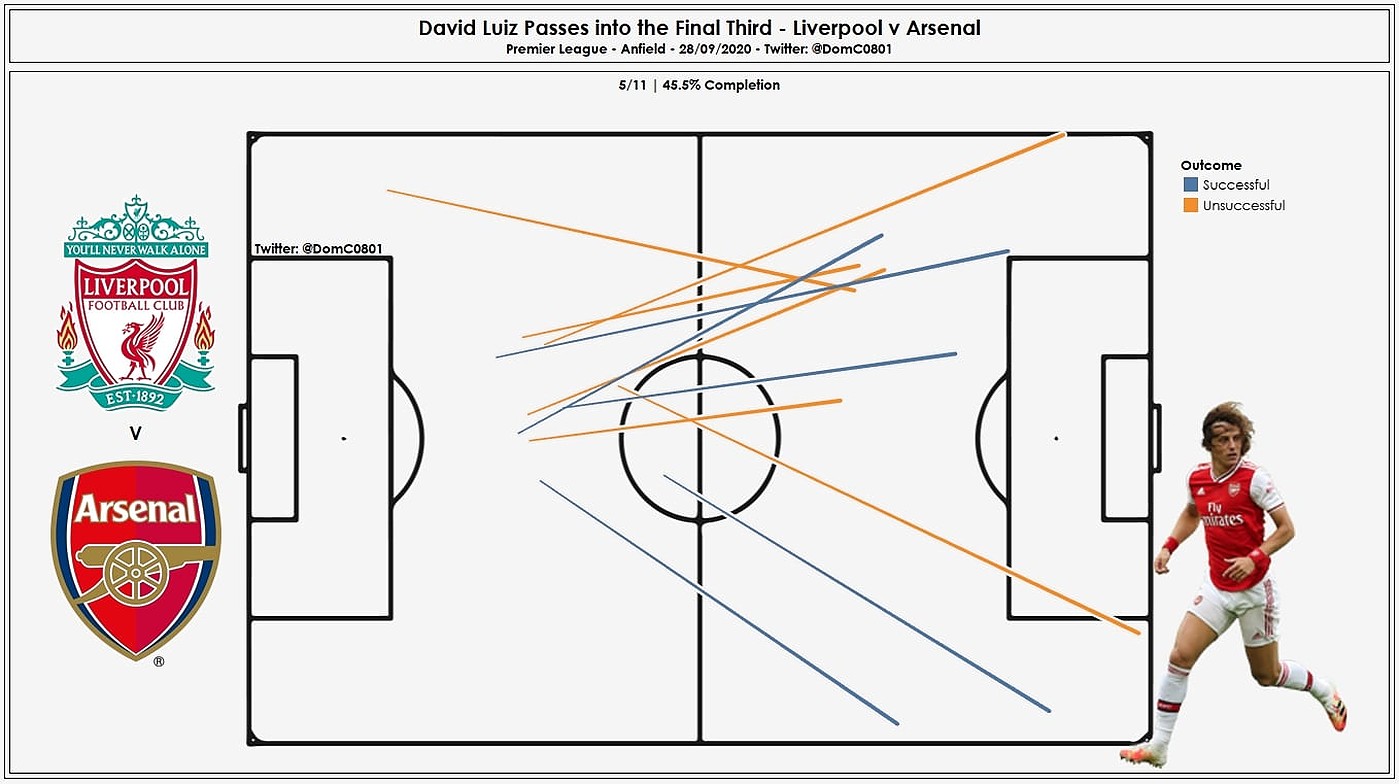 Above is a Pass Map showing all of the attempted passes into the Liverpool half from all of Arsenal’s starting XI. As we can see the only reliable way of getting into the Liverpool half was through David Luiz, who either switched the ball from left to right or played the ball over the right side of Liverpool’s defence (where he created a great chance for Maitland-Niles). Other than Luiz only Tierney and the two wing-backs managed more than 1 Successful Pass into the Liverpool half. Again this is less than ideal but is also a sign that this team has a long way to go before being able to contend with the likes of Liverpool when they’re firing on all cylinders. 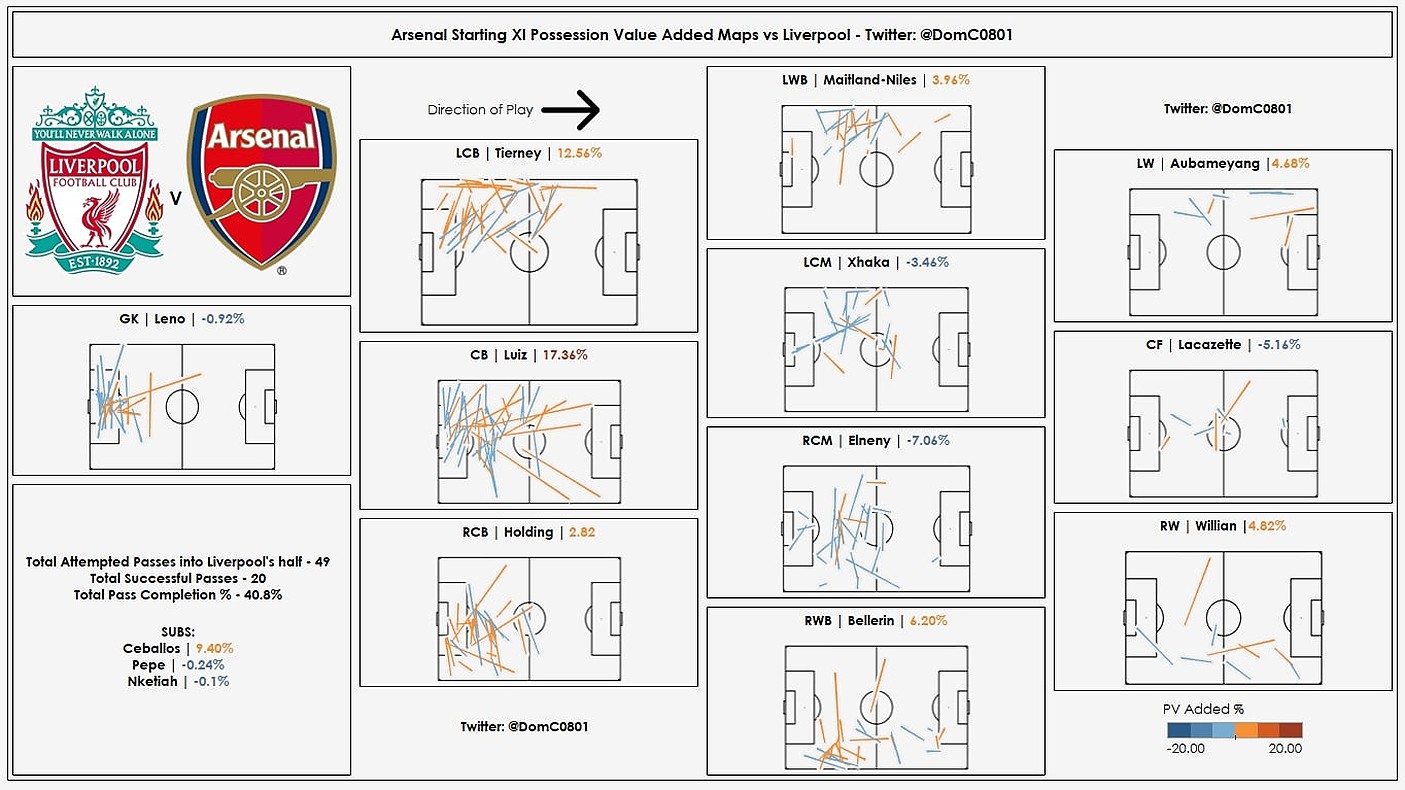 Above is the Possession Value Added (PVA) Pass Map for all of the Arsenal Starting XI with the Subs PVA’s provided too. Having two midfielders with negative PVA’s is quite frankly terrible (midfielders usually average somewhere between 10%-20% in any game) and goes a long way to explaining our struggles to escape Liverpool’s press under major duress. The fact that David Luiz was the most threatening with his passes also explains an awful lot about how the game went but also is indicative of the passing ability of the Brazilian with only Liverpool’s full-backs Andy Robertson (19.4%) and Trent-Alexander Arnold (30.4%) adding more Possession Value through their passing. 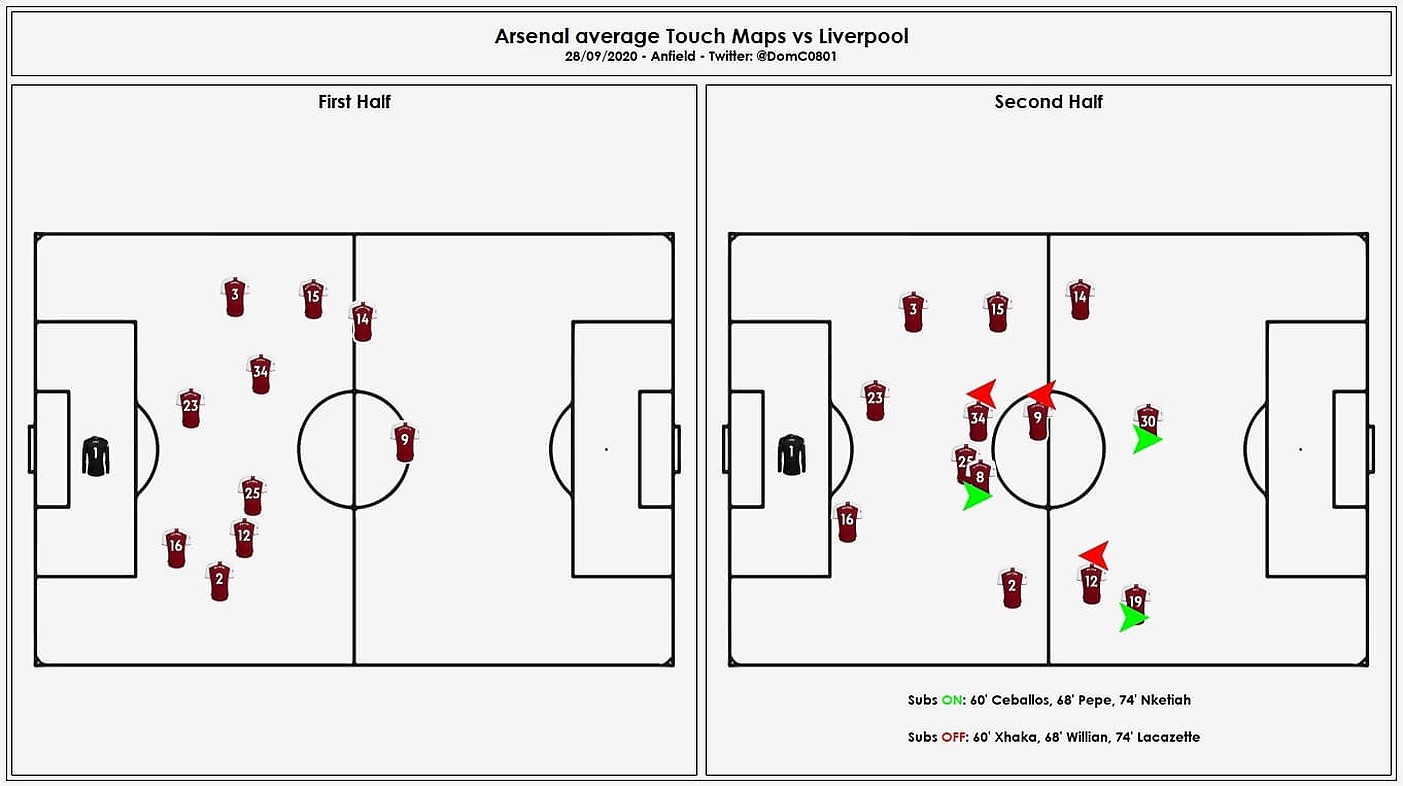 Above is the average touch maps for the Arsenal players from both halves. Our shape in both halves was all over the place with Willian occupying the areas you would expect a wing-back to take up. In the second half our shape improved somewhat, with Nketiah, Pepe and Ceballos all taking up positions further up the pitch than the the players they replaced but alas nothing came of the changes. 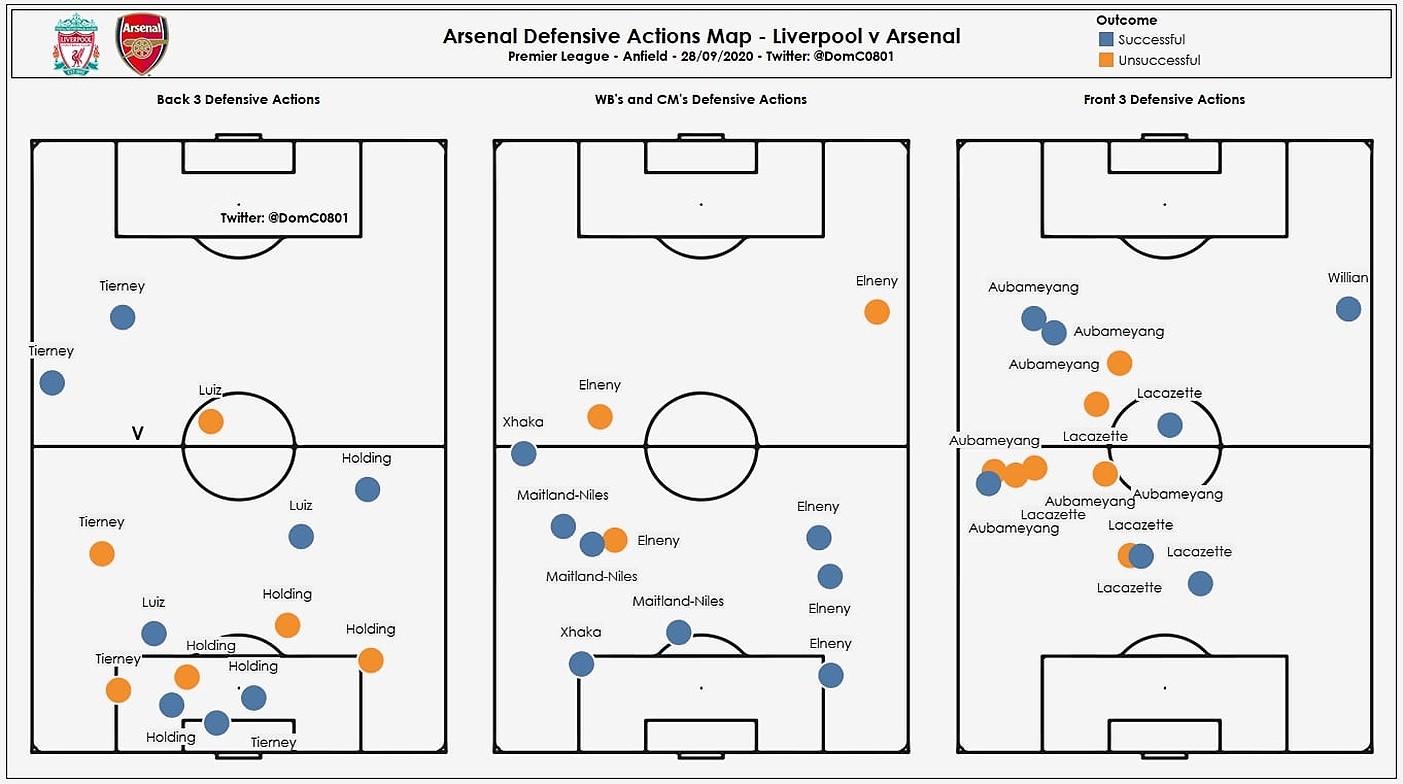 The last of the Visuals shows the Defensive Actions (Aerial duels, Challenges, Interceptions and Tackles) of each block in the 3-4-3 formation we lined up in. The amount of Defensive Actions attempted by Lacazette and Aubameyang is crazy and goes to show just how much work we had to put in on the defensive side of the game. Another worry is the 4 unsuccessful Defensive Actions either in, or just outside our own penalty area, which is never a good sign.

All in all, Arsenal were perhaps given a reality check as to how big the gap between Mikel Arteta’s side and the reigning champions is. If this game is anything to go by it is clear why Mikel Arteta wants to improve the midfield, with Houssem Aouar and Thomas Partey consistently linked.

On a side note I’ve presented some of these visuals in a different way to previous posts, especially the pass maps, so let me know what you think of the new formation-led presentation style.

Sheffield United at home is next in the Premier League, with another trip to Anfield (this time for the Carabao Cup) coming first which gives us a chance to hopefully get back to winning ways.

I think the layout looks great. These posts provide a useful way to understand the statistics in a easy to follow format.

This fascinating article reinforces what most of us already knew, even if we didn’t all admit it, and that’s Arsenal are very much “work in progress” and we’re a long way off mounting a serious challenge to the likes of Liverpool in the PL. OK, there are a few Gooners in “la la land” who thought that a “good” win at Fulham and a poor performance – but all the points – against West Ham somehow made us a virtual shoe-in for a top 4 finish, and even title contenders. Someone was even saying yesterday that the absence of the… Read more »

The good news is that on that performance Liverpool are going to stuff everyone else too. So it’s not really 3 points lost.

I’m liking the style, appreciate the work that’s gone into this!
I don’t really get the defensive actions map though.
Would need to really examine the map (and i’m too tired to do that atm)
Call me lazy.

Great layout. Visuals are outstanding. Between by the visuals and by the numbers, the technical content is outstanding. Excellent work Arseblog News Team!

Overall, I think that we’ve made a huge mistake in letting Martinez go, and keeping Leno. Last night, he seemed to wait until Liverpool closed into their press until he passed the ball out. He was slow and ineffective.

The goalkeeper is the least of our problem. Also people who keep whining about martinez don’t get to celebrate when we get aouar.

The goalkeeper is a major problem and it’s hard to understand people not realising how error prone Leno undermines the defence. He’s terrible at ball distribution and poor at crosses as was demonstrated yet again against Liverpool. We will regret selling Martinez and not Leno. Yes we will all be happy to see Aouar and hopefully Partey but not at the expense of Martinez

Fantastic post, a great way to show how the game was played. Thank you, keep it up!

I think I understand this layout better than the previous one. Great work.

I can’t wait for when we switch to a back four.

I like the layout aswell, but I really miss the passing stats of the subs. Please make sure you always include them.
Overall I really like by the visuals. Great stuff Dom, keep it up!