Arsenal made it 3 wins from the opening 4 games of the 2020/21 Premier League campaign as Mikel Arteta’s men sealed a 2-1 win against last season’s surprise package Sheffield United.

Let’s delve into the data to see if we can gain more insight into Sunday’s game! 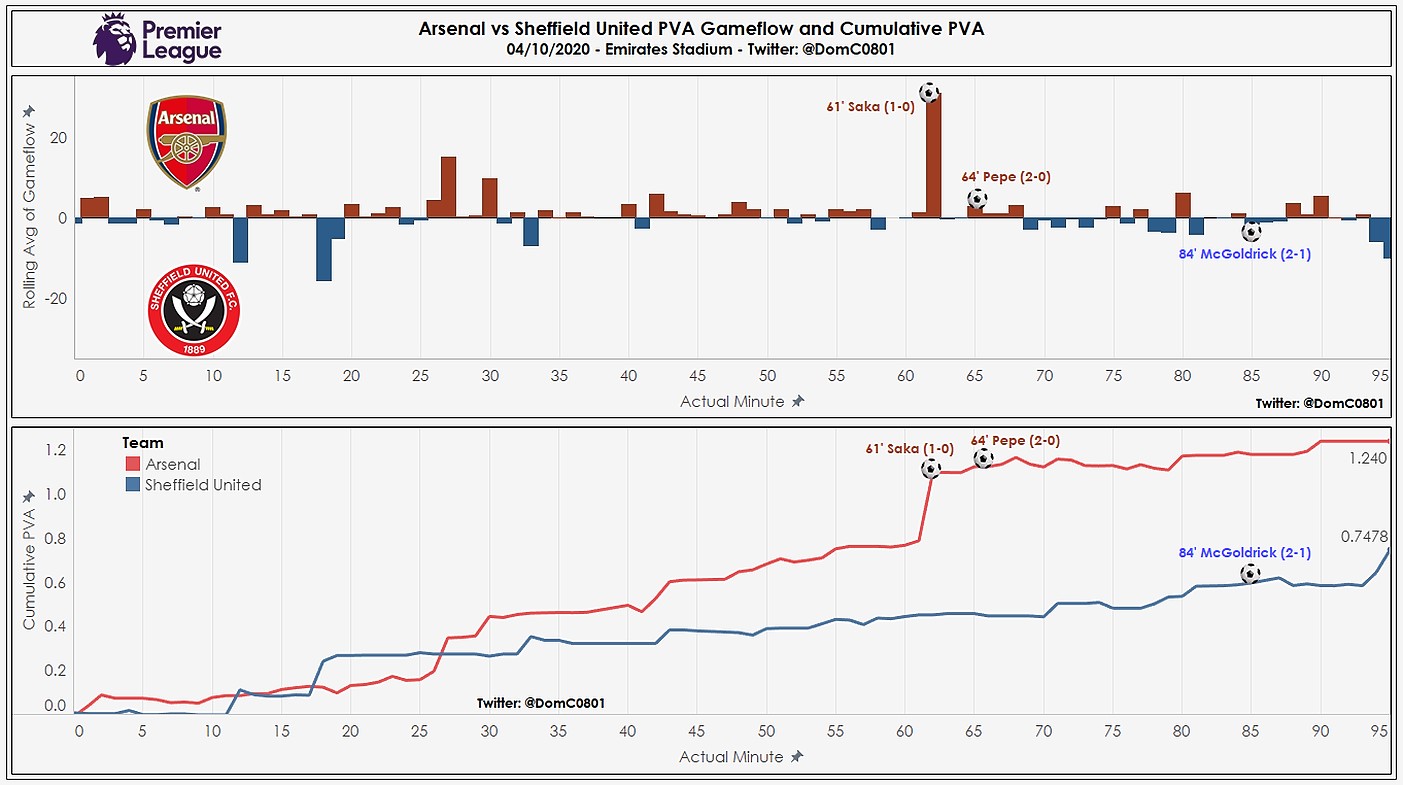 As we can see from above, both Arsenal and Sheffield United struggled to create threatening Possessions in the first half with Arsenal slightly edging it. The second half, and more specifically after Nicolas Pepe was brought on, resulted in Arsenal showing considerably more threat. Arsenal ended up winning the PVA match-up, however a PVA of 1.24 is not especially impressive. 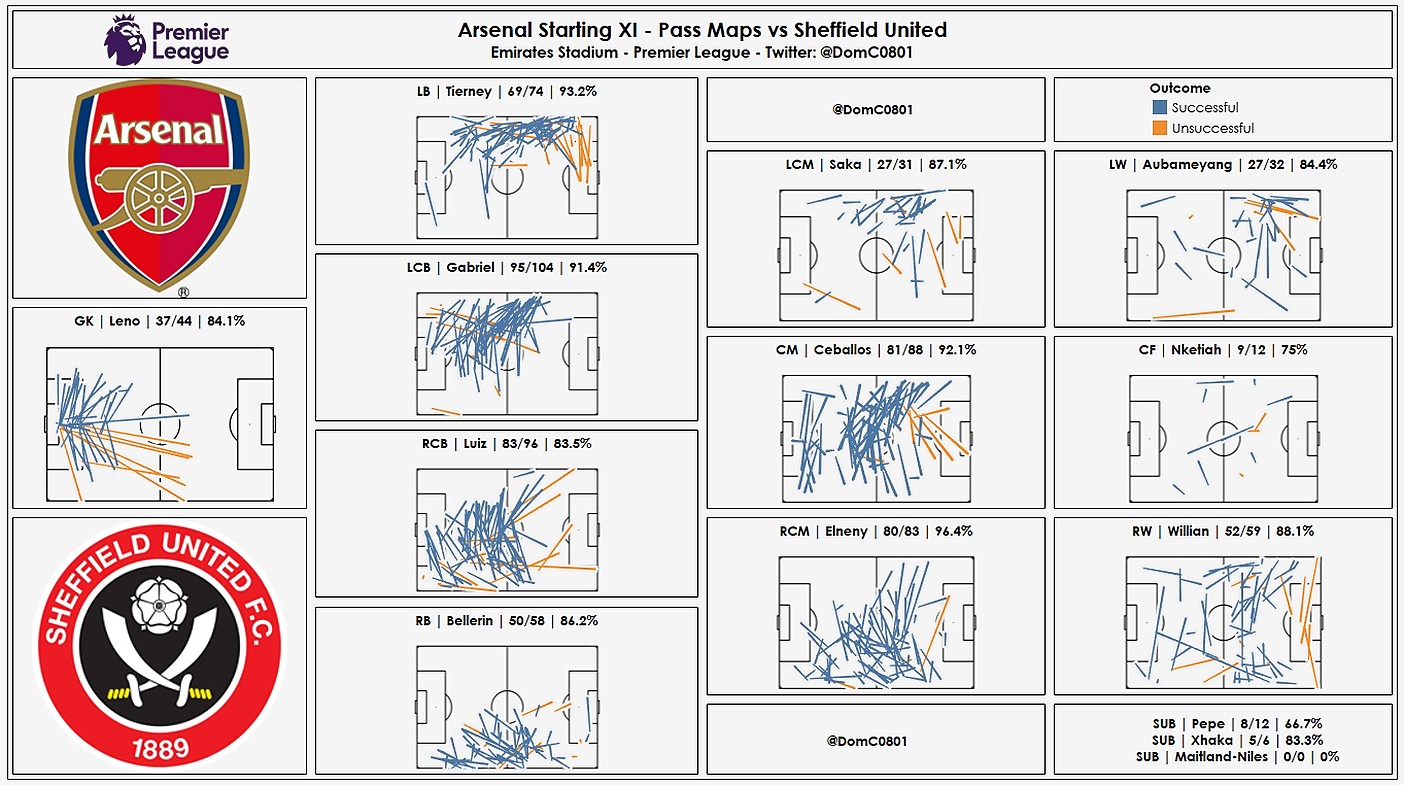 Above are the pass maps for each of the Arsenal starting XI with the substitutes numbers shown on the bottom right. The massive gap in the number 10 area is slightly worrying, however we are quite efficient at advancing the ball up the flanks, with Gabriel and David Luiz, as well as Ceballos and Elneny, being particularly adept at progressing the ball down the flanks. A strange thing to note from these pass maps is Bernd Leno’s kicking. The German attempted 7 long passes to the right flank and did not complete a single one. 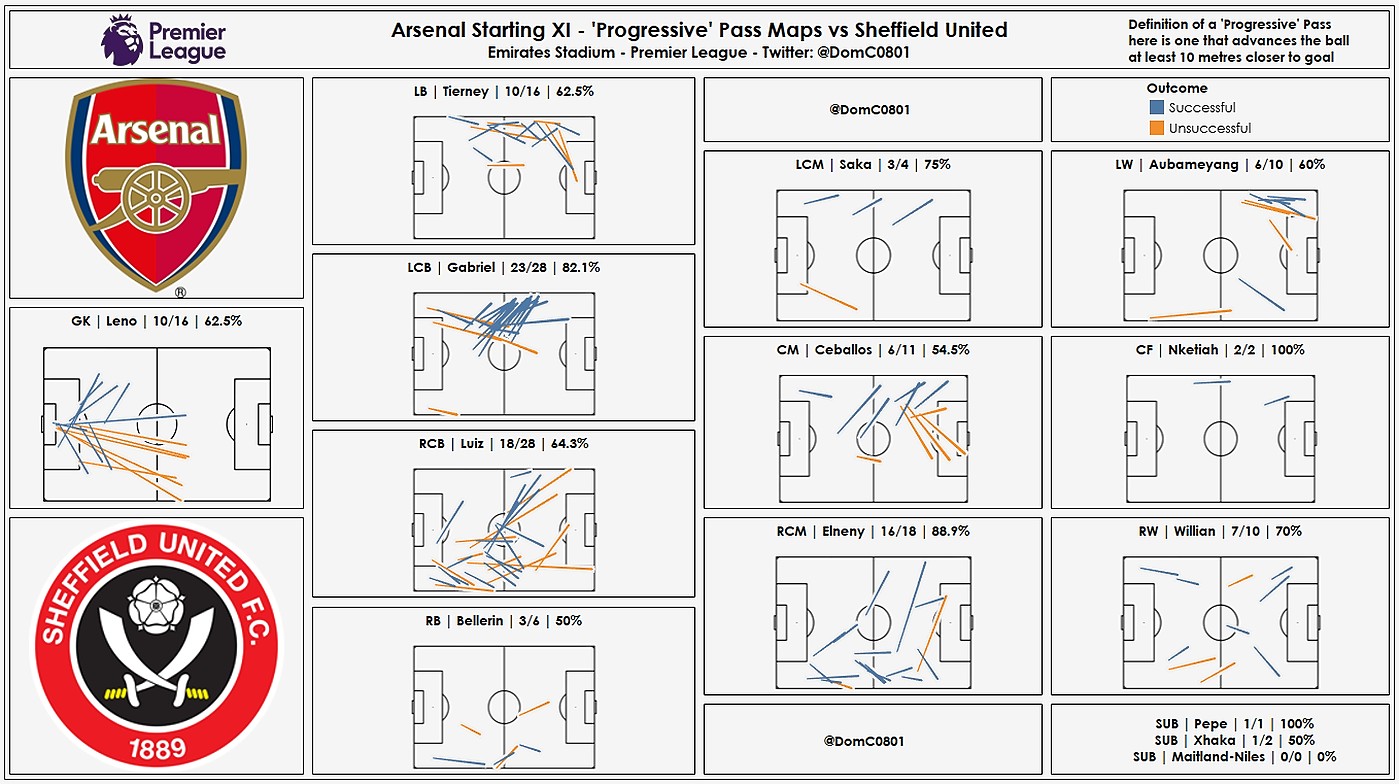 Above are the ‘progressive’ pass maps for the Starting XI and subs from Sunday’s game. Gabriel, Luiz and Elneny lead the way with the trio completing 57 of their combined 74 attempts. This further demonstrates our reliance on progression through the wide areas as is particularly evidenced by Gabriel. 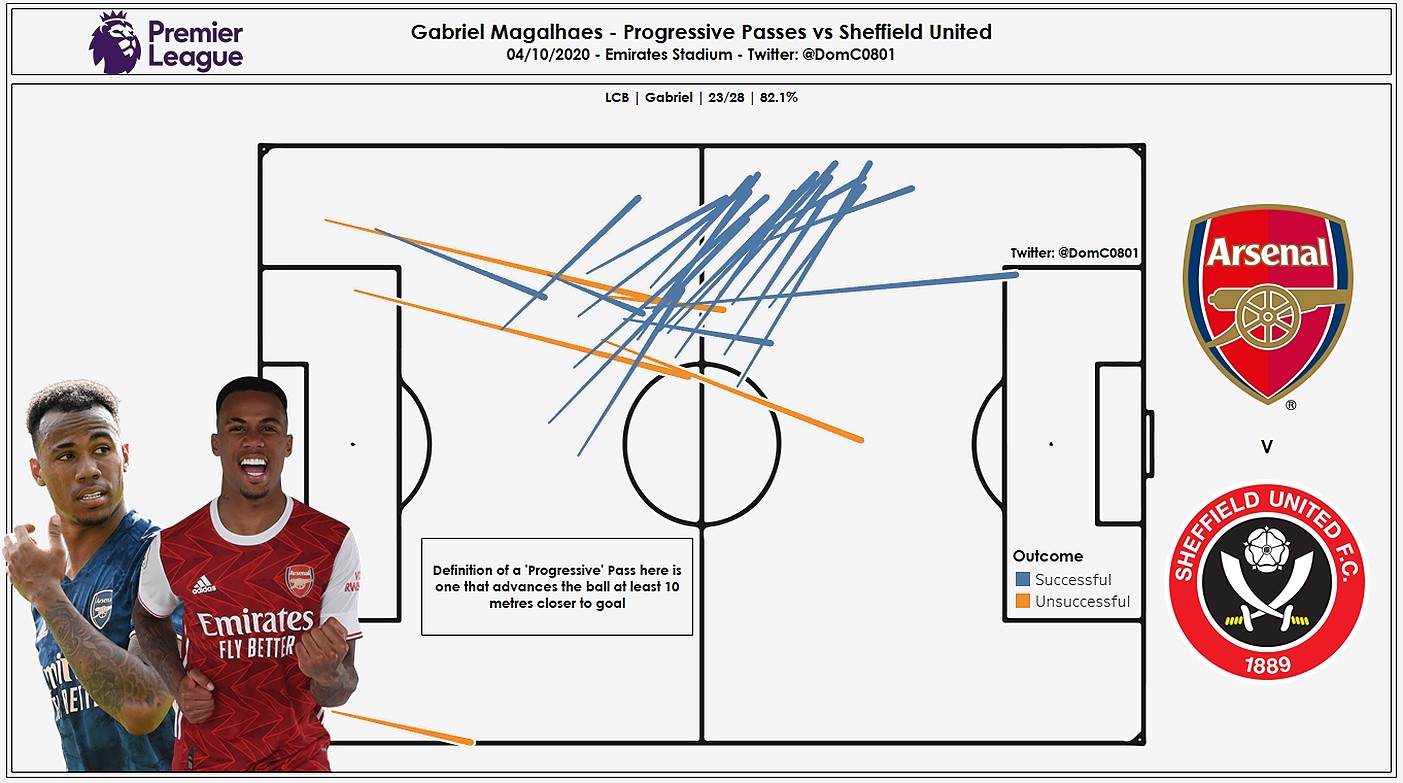 Gabriel completed 19 passes to the left flank, with the Brazilian showing particular efficiency at picking out Kieran Tierney and Bukayo Saka on the left flank. The former Lille man continued his great start for Arsenal with a comfortable defensive display coupled with his impressive passing performance. 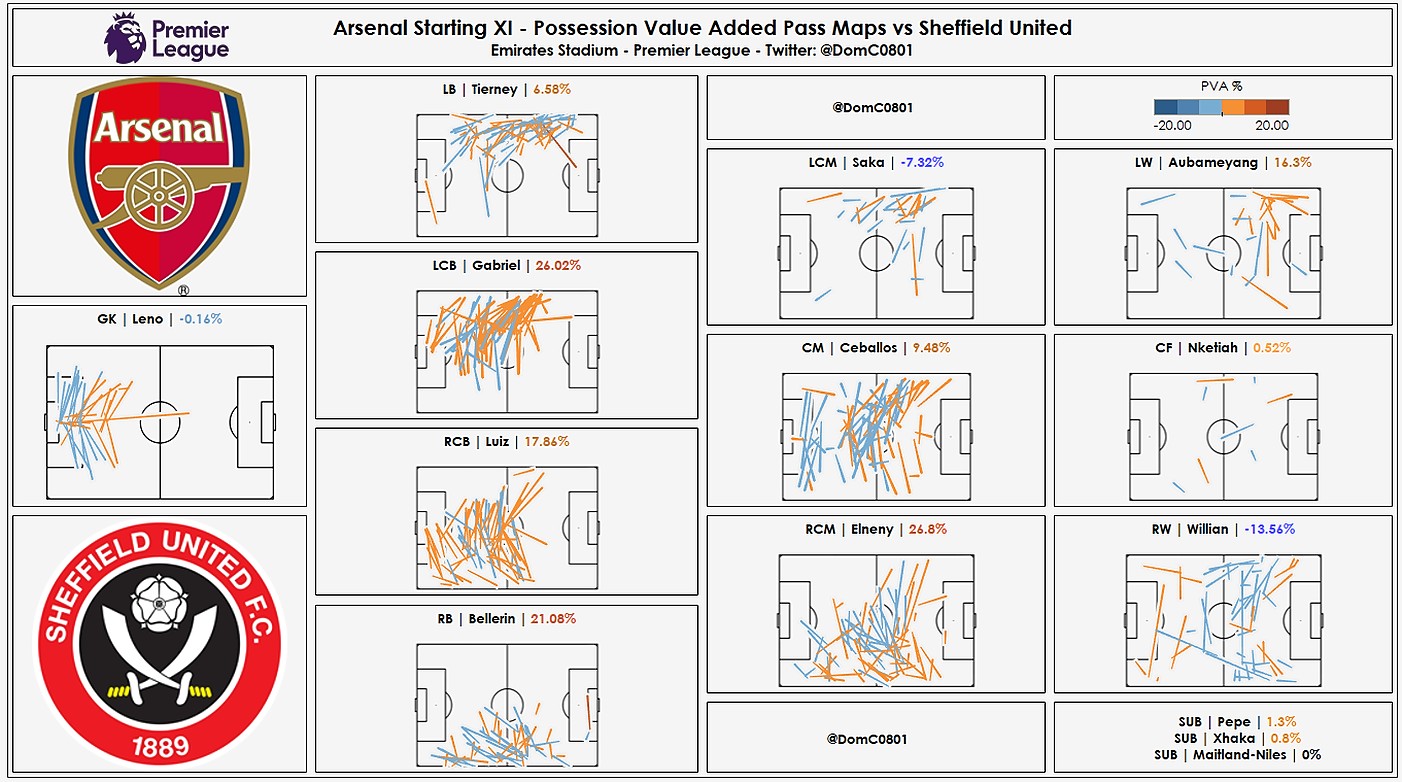 Above is a Possession Value Added pass map for the Starting XI and Subs. Again this further highlights the passing performances of Elneny, Luiz and Gabriel but it also highlights Hector Bellerin’s excellent performance (which Scott highlighted in his By the Numbers piece). Worryingly, Willian struggled on the right flank, with the Brazilian failing to produce may threatening passes (however he did play significantly better when moved to the left). 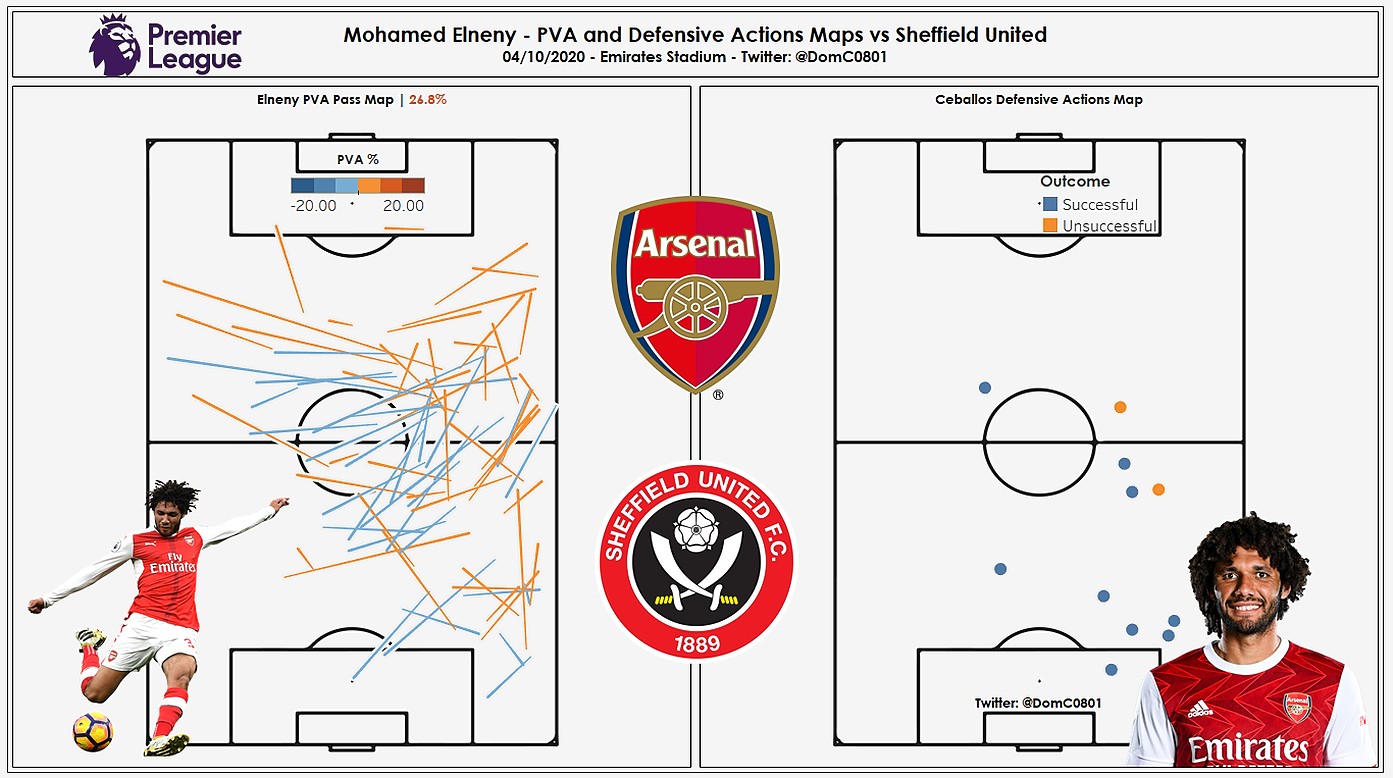 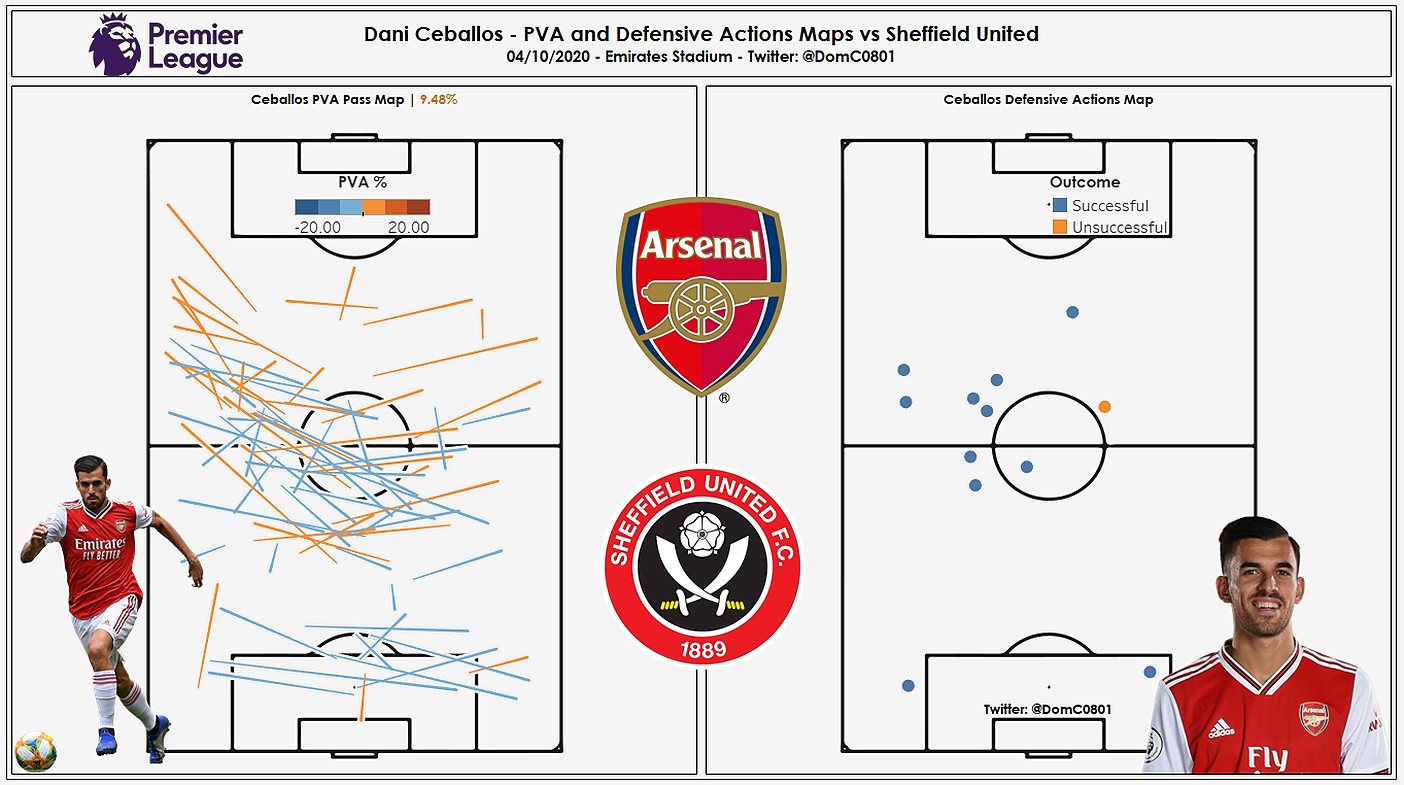 In a rather surprising selection choice, Mikel Arteta started without Granit Xhaka in the midfield, with Dani Ceballos and Mohamed Elneny preferred in his place. On Sunday’s showing both Ceballos and Elneny will prove difficult to drop as they both proved effective in possession and helped the defense in holding Sheffield United to an xG of 0.27. With Thomas Partey seemingly signing today, who should be played alongside the Ghanain international? 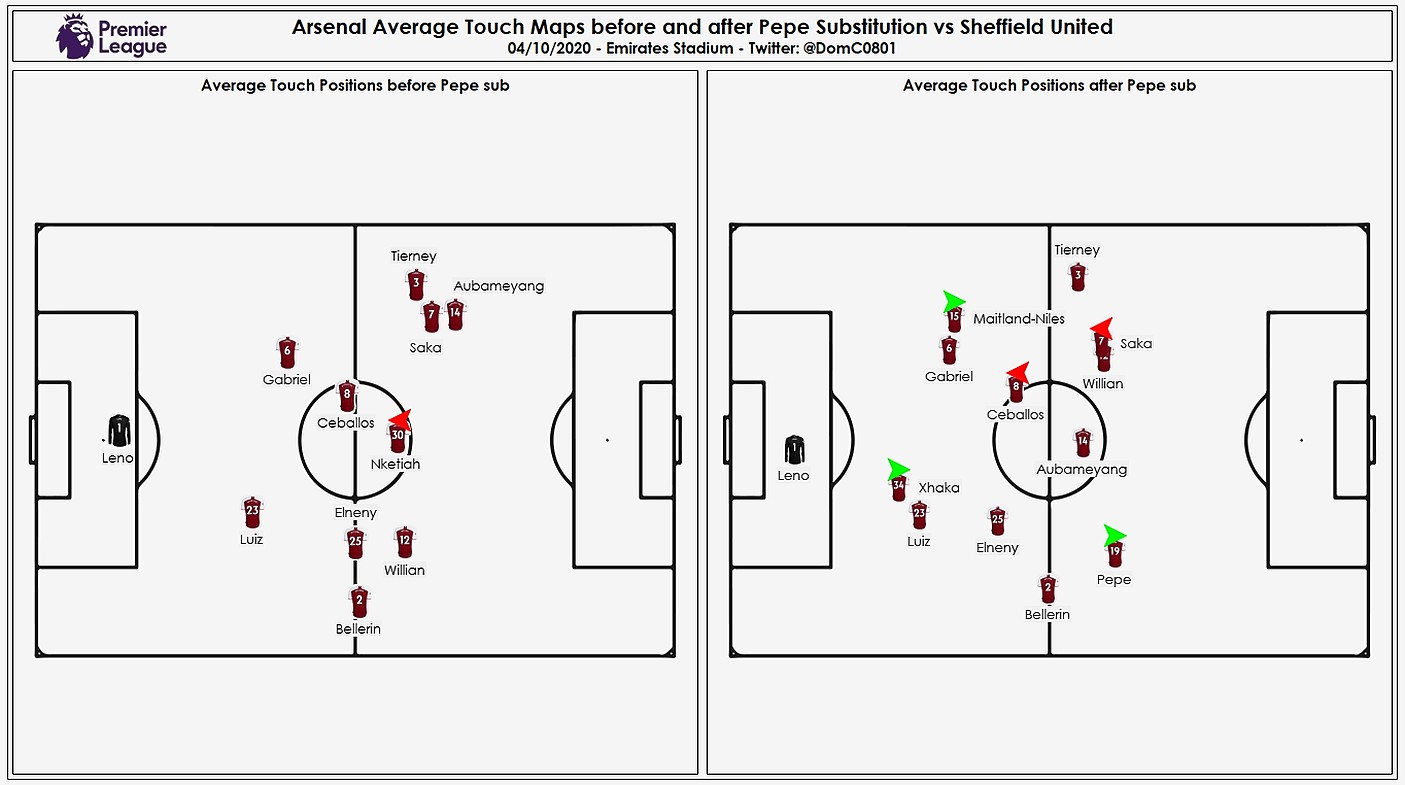 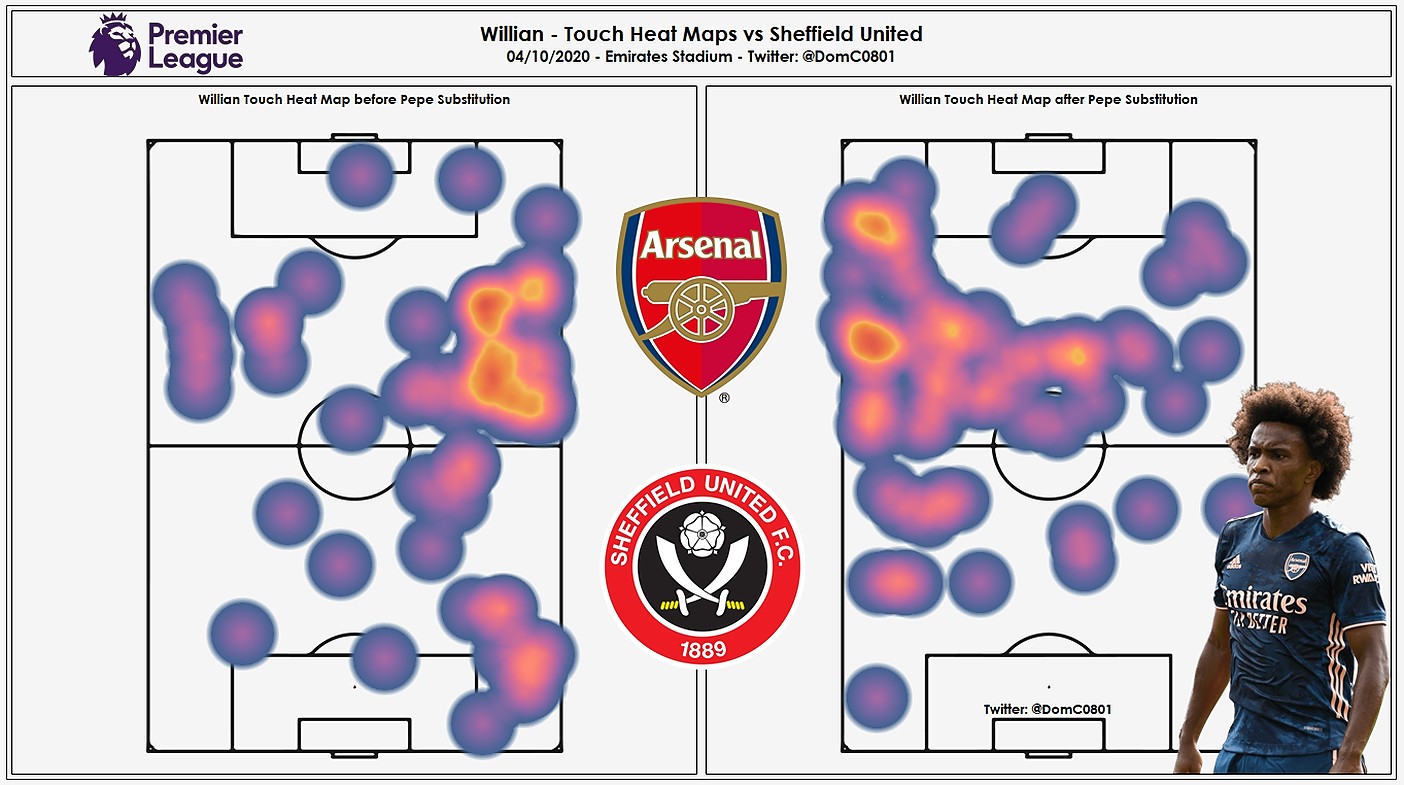 The last thing I wanted to cover was the tactical shift that followed the Nicolas Pepe substitution. With Aubameyang moving centrally, Willian and Bukayo Saka interchanged between playing centrally and playing out-wide as Arsenal began to threaten the Sheffield United goal more thanks to the improved passing and quick play that the trio of Saka, Pepe and Willian provided. Going forward I would not be opposed to seeing a trio of Willian, Saka and Pepe playing behind Aubameyang to attempt to alleviate our creativity problems.

That’s all from me today, and I will be (as I imagine many of you will also be) frantically reloading Twitter and Arseblog News in the hope of seeing Arsenal sign Thomas Partey.

Next up it’s Manchester City at the Etihad, with an international break to come beforehand, so let’s hope we can continue our good form and avenge our 3-0 loss from last season.

Data from Opta via Whoscored

Arteta boosted by Arsenal energy ahead of...

Saka & Ramsdale up for Premier League...

Always very interesting. Thanks very much!

Confirms my impression of Elneny from this game. He’s justifying his inclusion and I think that playing regularly in Turkey may have boosted his confidence.