Arsenal 3-0 Dundalk: By The Visuals

Arsenal continued their 100% winning start to their 2020/21 Europa League campaign as a rotated Arsenal side ran out comfortable 3-0 winners against League of Ireland side Dundalk.

Let’s take a look at the data to see if we can gain more insight into Thursday night’s win. Arsenal, as was to be expected, absolutely dominated their Irish counterparts, with Mikel Arteta’s men consistently advancing the ball into dangerous areas. Arsenal took a while to get going properly but from the 15th minute onwards it was a completely one-sided affair until the 80th minute when they took their foot off the gas. Interestingly Arsenal’s 3 goals came after their most dominant spell of the game, with the Gunners putting 3 goals past Gary Rogers in the Dundalk goals in a 5 minute spell either side of the half-time whistle. The Arsenal defence was largely untroubled with Alex Runarsson only being forced into one save on his debut. 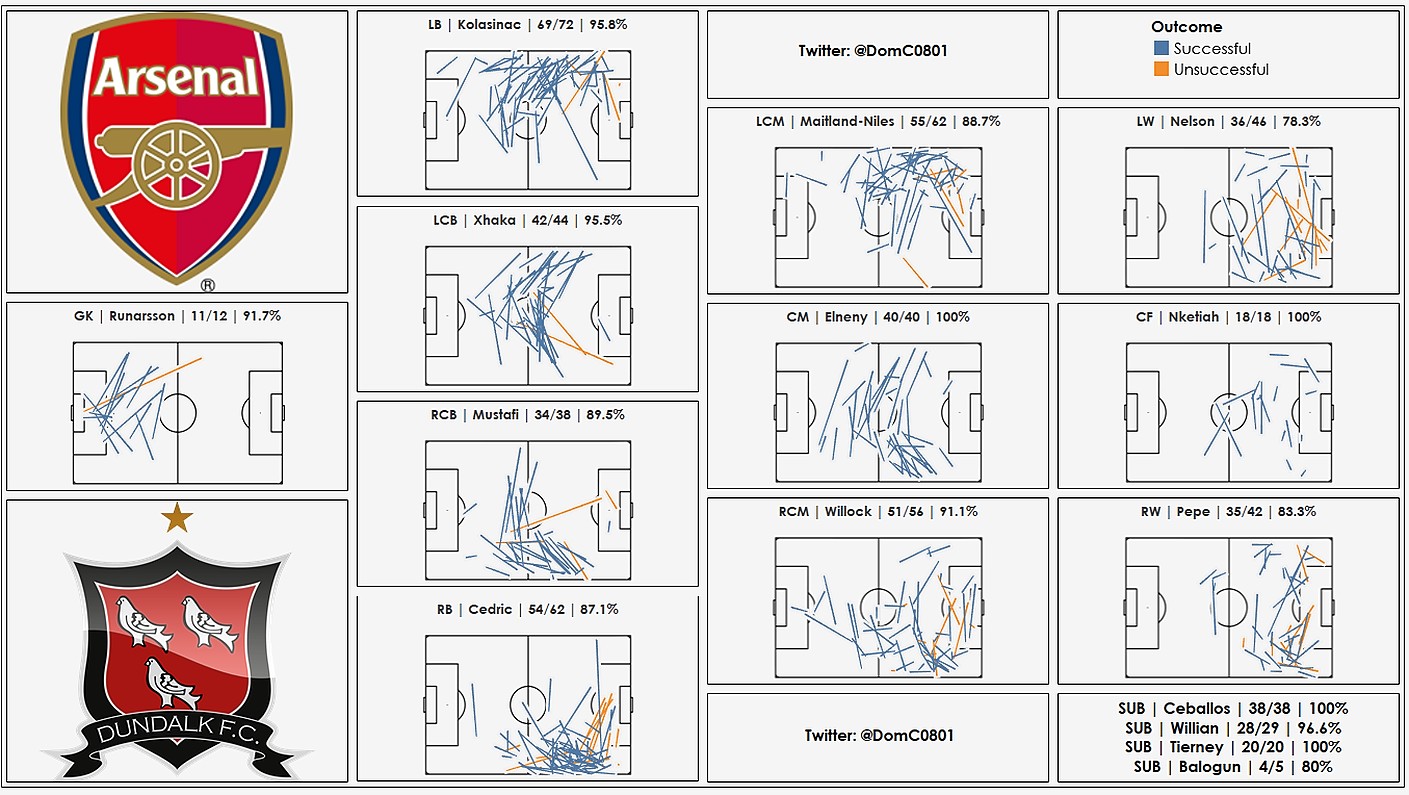 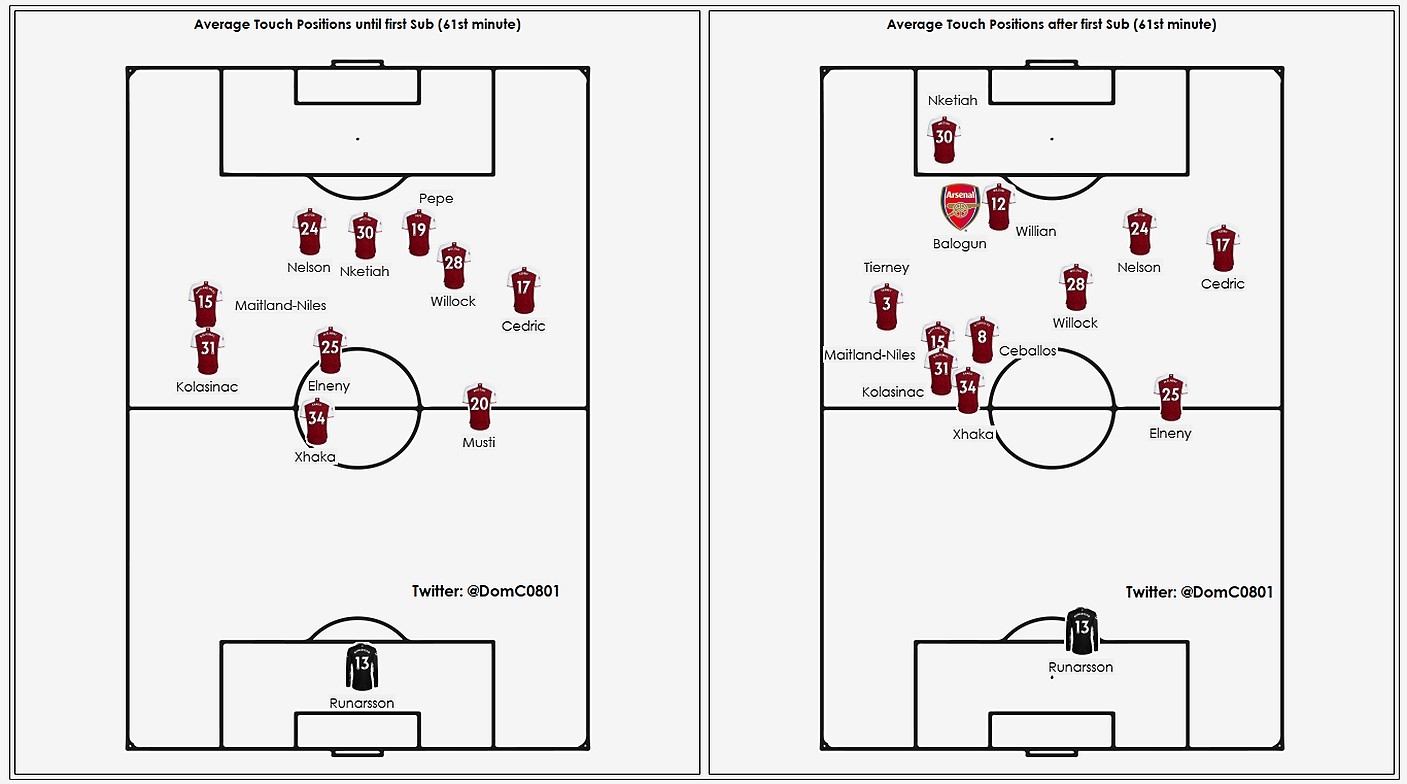 Above are the pass maps for each of the Starting XI as well as the average touch positions before and after the first substitution. Granit Xhaka played an unfamiliar role as a centre-back alongside Shkodran Mustafi (who is mistakenly labelled as Musti throughout the visuals which I apologise for!) as a result of Arsenal’s injury crisis at the position as well as the decision to not register William Saliba. Interestingly Arsenal’s front three stayed very close together, with Reiss Nelson and Nicolas Pepe occupying central spaces either side of Eddie Nketiah. This has been something that has been lacking for Arsenal so far this season, as our inability to find space between the midfield and defensive lines has seriously hampered our creative capabilities, however Nelson and Pepe had no such problems albeit against significantly weaker opposition. Also of interest are the passes and average position of Joe Willock, who produced a Man of the Match display as he showcased his ability to get into the box and cause chaos in opposition defences, traits that are sorely lacking in our other midfield options. It is also notable how well balanced our attacks were, with both wings being used evenly, making it more difficult for Dundalk to attempt to pin us to one touchline.

Above are the PVA scores for the Starting XI and substitutes. Ainsley Maitland-Niles was particularly impressive in this regard, with the Hale End graduate showing his passing ability from a more central position than he has been played in of late. Notably the full-backs, Cedric Soares and Sead Kolasinac, were able to get high up the pitch and deliver some crosses into the box, with both players threatening the Dundalk defence regularly in this regard. 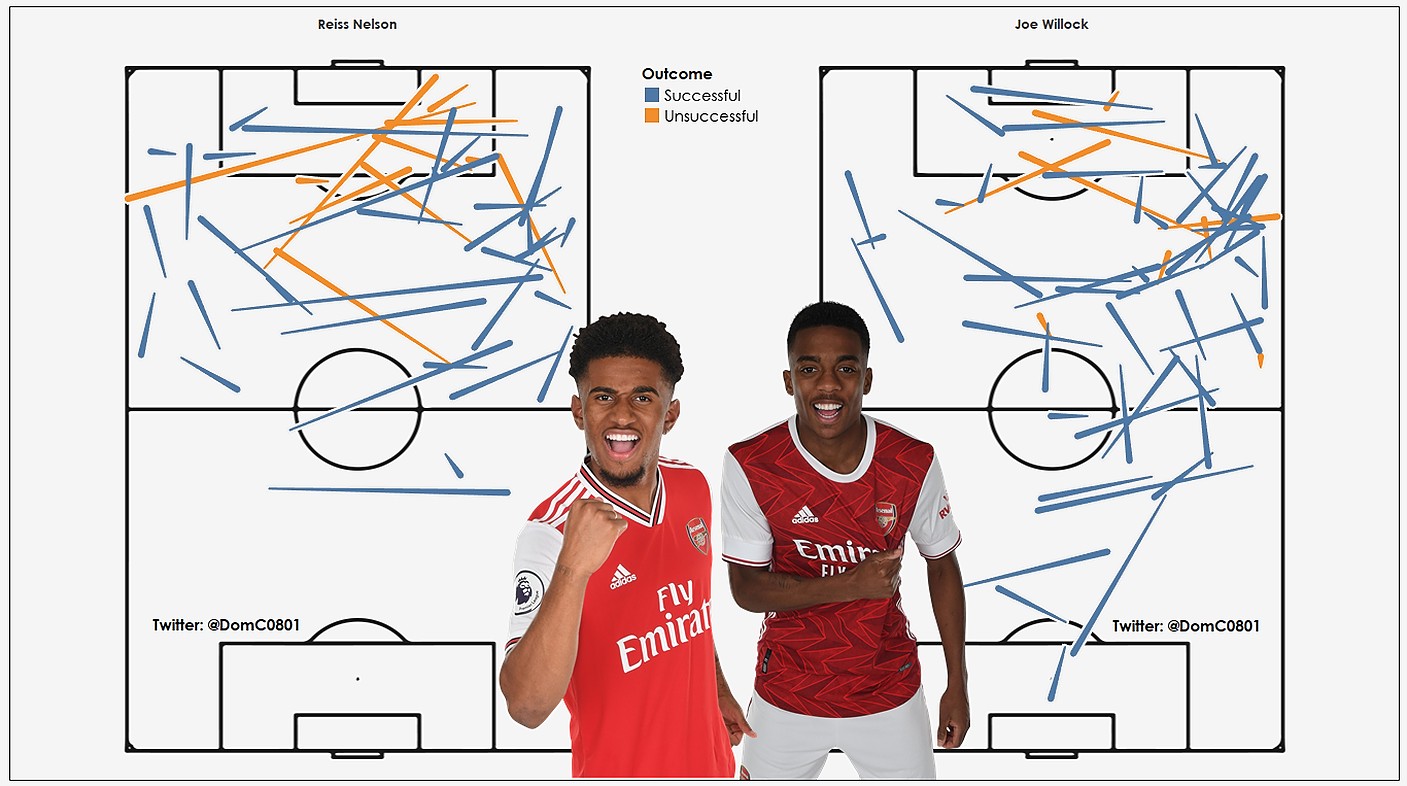 Lastly, I wanted to highlight the performances of Reiss Nelson and Joe Willock. Arsenal have lacked creativity so far this season with our Expected Goals tally of 6.5 tied for only 12th best in the league. Nelson and Willock are two players who seem to possess skillsets that we lack in the squad, with Nelson capable of dropping deep to link the midfield and attack as well as being able to drive at opposition defences at speed, and Willock capable of arriving late into the box and finding space between the lines. These skillsets could see the two Hale End graduates receiving more opportunities in the league this season as they seem to be two potential internal solutions to one of our biggest problems.

It’s on to Old Trafford on Sunday to face a high-flying Manchester United side who have beaten Paris Saint-Germain 2-1 away and RB Leipzig 5-0 at home in the last 2 weeks. Mikel Arteta will be looking to avoid a 3rd consecutive Premier League defeat, a feat Arsenal last managed at the end of the 2018/19 Premier League season as Arsenal’s Champions League push collapsed with losses to Crystal Palace, Wolves and Leicester.

xG data from StatsBomb via FBRef

Was an interesting game to watch, but Sunday will be much tougher of course! I liked the creative play mixed with some great long balls, but maybe this was easier due to the opposition being who they were… Here’s my ideal lineup for Sunday: Leno Bellerin Luiz (if fit) Gabriel Tierney Willock partey ceballos Willian(or Pepe) auba saka Willian if fit and sharp, else Pepe to start on left. Try get early control of midfield and some goals, then sub some more defensive players on later to protect the defense and counter attack with front line. Excited for the game… Read more »

Willian might have to have a late fit and sharp test…

Haha indeed! Clearly people not liking my thoughts… Sheesh, tough crowd. Not sure why all the thumbs down. Just getting excited for Sundays game!

There was talk from Arteta about Willian’s fitness and that he is still getting back to being his sharpest. Hence my comment around this.

Thanks Dom for putting these articles together, they’re really interesting and easy to understand. Joe Willock was all over the pitch and it’s really nice to be able to see that in the diagrams. It was a good match to watch and these pictures confirm what I thought I was seeing, much appreciated.

Come on dude. You know you call him Musti when no one’s around😆.

That average touch position map is the highest I’ve seen us all season.