Watching the Europa League can be a bit hard for me at times, especially now that Europe has changed from daylight savings to standard time where this match kicked off at 1pm my time. Normally during the noon kickoff, I watch during lunch and maybe take a bit longer than an hour to be able to watch if not all of the match live, at least most of it. In this match, however, I was interrupted several times and didn’t get to watch as closely as I normally would like.

That lead me to be a bit surprised by some of the reactions to this match where people had a bit of a negative view of Arsenal’s performance. Maybe because I watched the period where Arsenal scored 3 goals and less of the period towards the end, but overall I think that this was statistically the best match Arsenal have had this season (with a grain of salt for the level of competition).

Arsenal 3-0 Dundalk: By the graphs 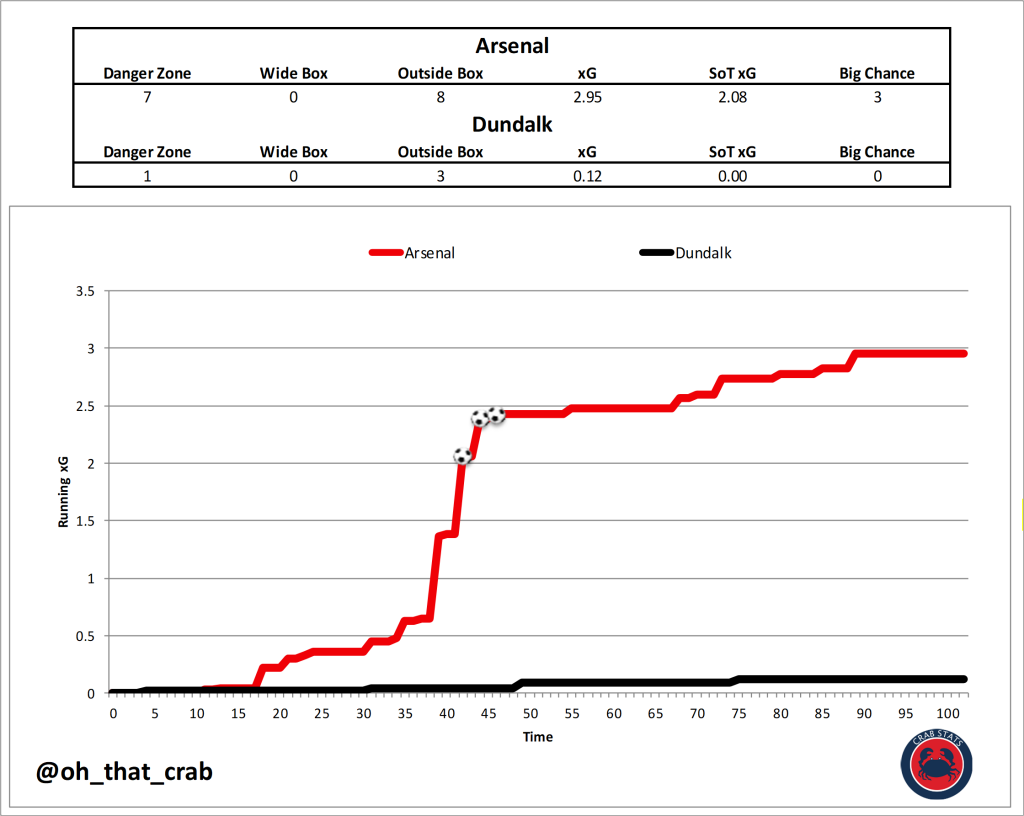 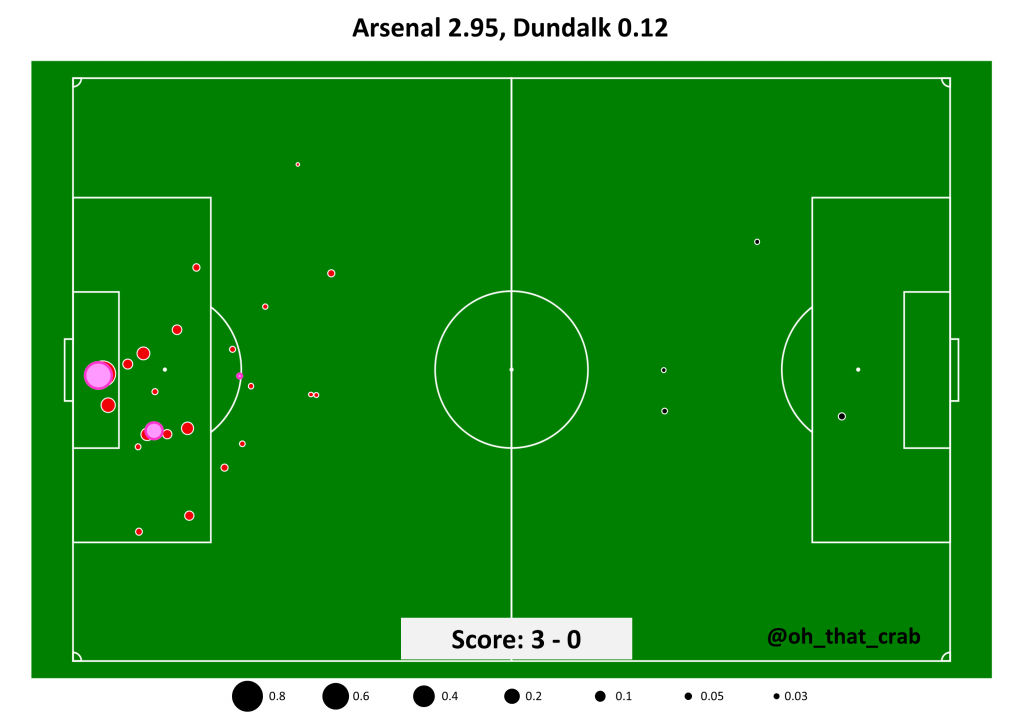 25 – Shots for Arsenal, the most they have taken in a match this season

6 – Shots on target for Arsenal, the most they have had in a match this season

3 – Goals, tied for the most they have had in a match this season

3 – Expected goals, the most they have had in a match this season

16 – Key passes for Arsenal, the most they have had in a match this season

24 – Passes completed into the penalty area, the most they have had in a match this season

5 – Crosses completed into the penalty area, tied for the most they have had in a match this season

61 – Progressive passes completed, the most they have had in a match this season

72 – Touches in the box for Arsenal, the most they have had in a match this season

16 – Successful dribbles for Arsenal, the most they have had in a match this season

It is really easy to tut tut this attacking performance becuase Dundalk isn’t very good but I would rather look on the positive side. Arsenal too often plays to the level of the competition but in this match they did not, producing their highest attacking output this season, even with a side that was heavily rotated.

Joe Willock adds a different dimension to the midfield

22 – Pressures, 8 times Arsenal recovered the ball within 5 seconds after his pressures (led Arsenal)

3 – Passes blocked (tied for the most on Arsenal)

One of the thing that Arsenal have really missed is an attacking threat from midfield. Since the departure of Aaron Ramsey, Arsenal’s midfield has looked very reluctant to make runs into the box with any sort of regularity. That is one of the things that really jumps out about this perfromance for Joe Willock, is that he led Arsenal in touches in the box but still played a primarily midfield role. 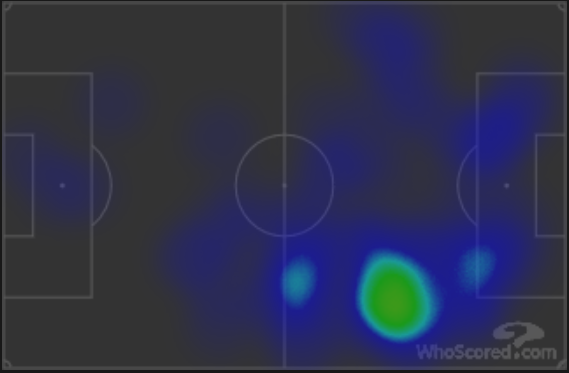 His heat map shows that this wasn’t just him playing in the box, quite a few of his touches came in the middle third of the pitch. This match was also one where he was able to buck the trend where too often he finds that he will be disconnected from the rest of Arsenal’s team leading to him getting few touches. The skill set of Willock is one that is pretty unique among Arsenal’s midfielders, and in this match, I think he showed the potential value that he (or another player who does something similar) can bring to the attack.

3 – Passes completed into the penalty area

13 – Touches in the penalty area

12 – Pressures, 5 times Arsenal recovered the ball within 5 seconds after his pressures

Reiss Nelson had the chance to go out on loan this season but instead chose to stay and fight for time at Arsenal. I was a bit dissapointed that he hadn’t gotten more chances to play this season and his performance here makes me think that he will be in line for more opportunities. Nelson was the hub through which the attack flowed through in this match, recieving the ball in middle/final third area and driving forward. I think in this match he made a strong case that he can fill a role that is often lacking in Arsenal’s squad this season.

One of the things that Nelson is very good at is driving forward with the ball and beating defenders one on one. He is also well above average at retaining possession, especially considering how often he takes players on and possess the ball in threatening parts of the field.

This is something that the other forwards that Arsenal have don’t excel at. Nicolas Pepe dribbles a lot but he will lose possession quite often. Pierre Emerick-Aubameyang is better deployed running behind a defense instead of trying to beat a player one on one. Willian used to be a player capable of this, but as he has gotten older that skill has deteriorated.

Sources: Opta via whoscored, my own database. StatsBomb via FBref.

Previous articleArsenal 3-0 Dundalk: By The Visuals
Next articleArteta: We’re suffering without fan connection

I bet you were furious that Leicester caught us on the break too. Can’t win with some people.

We started a little deep and quickly changed it around when we realised that Dundalk were, in fact, Dunwank.

Interesting as usual with the stats in our favour … but it was Dundalk! A far better test is looming large at Old Trafford. A big club (even if not a “top” team, currently). It’s against teams like that we really need to turn in “a performance”. I wonder what the corresponding “by the numbers” article on that game will show? Not long to wait now.

I really hope Arteta doesn’t overthink his way to the sack. He had such a good start but it’s been wobbly so far this season. We need a convincing performance as soon as possible to build on. It’s all well and good having structure and making games close. That can give confidence to build on, but if the players are restricted in being able to take risks themselves they can’t grow. If someone else is always doing the thinking for you it’s very easy to stop using your initiative.

Sorry to be a bit confrontational, but who exactly are we to judge – or not judge, for that matter – another team as “a not top team”? They have beaten PSG, and RB Leipzig are certainly above Sheffield United Level this season ( very low baseline) and Utd tokk them off 5-0.

No disrespect to Dundalk, but they are probably equivalent to a league 1 team in England. I imagine Cedric earns more in a week on his own than the entire Dundalk team. Sorry, but beating these 1 nil, 2 nil, 3 nil or 9-0 does not prove anything. Our Europa league group is weak so play the kids. We have tough games coming up and if we fail to perform and results are bad, the pitchforks for Mikel will be out.

I didn’t know you lived in (assuming) the US. That takes some serious dedication to watch our games.

Nelson played with great confidence, a trait which I think is what’s missing in his game. Hope to see more of it.

Side note – Why do these guys wear their socks so low😂😂😂. I played football team and always wore them high. The grass is never kind to your legs when you go down. Artificial turf is even more punishing.

Scott Willis
Author
Reply to  Salibaba and the Forty Thieves

Yeah I am in the US

It looks like the xG graph shows we “played to the level of the opposition” except for a 10-minute patch immediately before and after HT.

Disagree about Nelson, thought he tried “too hard”, he seemed always to miss the right pass. Not a performance that will convince Arteta. But I’m confident he will improve, I also think he should’ve got more opportunities. I feel he is quite similar to Pépé but didn’t cost 72m£. 😛 I do agree about Willock, he is fantastic! Reminds me a lot of Ramsey, he is special. Hope he will get many minutes in the PL. Because a midfield of Ceballos, Partey and Xhaka won’t work, that’s way too defensive minded. Willock is the only one who can make intelligent… Read more »