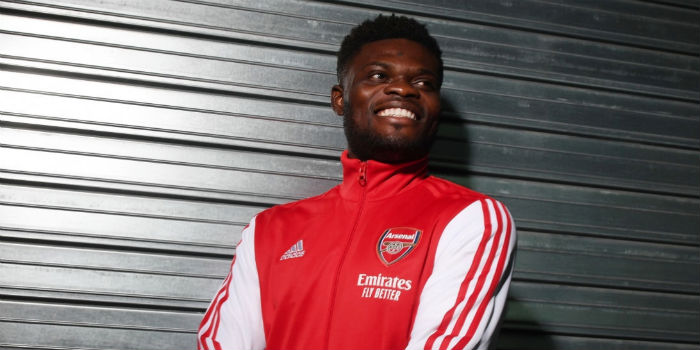 Francis Cagigao, Arsenal’s former head of international scouting, says Thomas Partey had to play “with the handbrake on” at Atletico Madrid and thinks the Ghana international will bring more than just protection to Mikel Arteta’s midfield.

The 51-year-old, who was let go in August, now expects Partey to be a success at the Emirates.

In an interview with Chris Wheatley of Football.London, he said: “It’s in the public domain that he [Partey] is a player we’ve looked at for a very long time and a player we recommended very strongly in the past and recent past.

“He’ll bring qualities to the side that are possibly lacking in that position, he’ll certainly bring more cover and protection in areas where the team possibly needs it.

“I would also say that he’s a player who has possibly a lot more to offer than what we’ve already seen of him.

“He had a little bit of a restricted role at his previous club and sometimes played with the handbrake on – to use one of Arsene’s expressions – and I think that he’s going to be a very, very good addition to what is already an immensely strong squad.”

There are lots of interesting snippets from Cagigao in the full interview. It’s well worth your time. Find it here.

It obviously is. Interview is clearly after we signed Partey. Restructuring was way before that

It’s just the way he speaks, it’s as if he is still part of the setup.

Clearly I know the timeline otherwise why question when this interview came.

After nearly 25 years in the job he’d have developed some vocal tics using “us” and “we” etc in describing Arsenal, I suspect

Plus growing up the club as a kid

“He had a little bit of a restricted role at his previous club and sometimes played with the handbrake on – to use one of Arsene’s expressions – and I think that he’s going to be a very, very good addition to *what is already an immensely strong squad.*”

Our squad is immensely sort of ok

I think it is an immensely strong squad. It’s not really glaringly lacking in any area, now, except maybe in attacking midfield (and even there we have one of the best creative 10s in the world who just happens to be out of favour/a poor tactical fit/past his best).

And a fat lot of good he is whilst he’s sat ostracised at home instead of being out on the pitch and linking up with Partey. I hope Arteta knows what he is doing, because Arsene Wenger has already tried to advise him recently that using Ozil would still be in the club’s best interests. It’s one thing for us to judge Ozil’s ability – it’s quite another for a man of Wenger’s managerial pedigree to judge. I sincerely hope Arteta has listened to Wenger’s advice; more fool him if he hasn’t. Our midfield is crying out for someone to… Read more »

We get it!! You are an Ozil fan boy. Good luck supporting him and a new club. Get over it, he is finished at Arsenal and no one cares.

Blog, I see what you did there (Handbrake). You can take Wenger out of Arsenal but you cannot take Arsenal out of Wenger. Whether his quotes, sensational football, or intelligence, Wenger is always relevant.
I don’t want to speculate how high we will finish the season but I am more optimistic that I have been in a long time. Can’t wait to get the Partey started. COYG!!

Johnny 4 Hats
Reply to  Me from Here

It also helped that it was a direct quote from Cagigao.

Well, I think he’s going to be the core of Arsenal’s midfield. He, Xhaka and Ceballos are going to boss the midfield this season. He(Partey) is also going to be a creating outlet just like Alex Song but in this case he’s going to have players like Xhaka and Elneny covering for him when he’s in front trying to make things happen. Hate Song all you want but I think he’s one the best midfielders to play for Arsenal during Wenger days. In his time, Song shouldered two major responsibilities; he played as a DM shielding our defence and also… Read more »

I didn’t say he’s like Alex Song. I said he’s going to create chances like Song did. Whether you like it or not Song was better than our crop of midfielders we currently have.

No he wasn’t. He was good but know where as good as he began to see himself. Are you his mum?

He was never a proper DM though. He could either play B2B or as a deep lying playmaker, and a passable impression of a CB occasionally. But never was this tough tackling, positionally disciplined defensive mid. And if Arsene tried to use him as one, well that was his mistake. He was great when he was partnered with Arteta and given more license to roam

Not saying he was on that level, but would you call Pirlo and Kroos luxury DMs, just because they are deep lying midfielder who aren’t particularly switched on defensively?

Not sure if this is a slight on song or not… Seems to be. But Sama is right. Alex song was a superb player. I think if we had of managed a song, Díaby, cesc midfield long term. We would have won a lot more. Unfortunately we got robbed of Díaby, just the player we lacked to push us over the top. Fingers crossed partey is even better, but it’s not a bad comp. Song at his peak was class.

Song was a very good player for us, and his link up play with RvP was also very good.

Song to Henry during the King’s second coming is my favourite Song moment.

Song to Eduardo for the outside of the boot flicked volley finish against Burnley is my favourite Song moment. (It was also the very first Arsenal goal I saw live.)

The song chip to RvP for the volley finish from the corner of the 6-yard box was mine away to Liverpool in 2012. Game winner, and Song was brilliant that day. In fact I think that season was his peak – he was dominating!

Thomas, would surely add value in the middle, my concern is when you leave out Auba, Laca, and to a certain extent Saka, im wondering where are the goals, going to be coming from.

simple…. Don’t leave them out. Pretty sure every match we’ve had at least one of the aforementioned trio included in the starting 11, dating back to the Emery days. Not that those instances provided a suitable amount of goals, but there ya go.

Yes, of course but that assumes we’ll have them available in the first place. It’s early days yet and there’s a long, hard, season ahead. Sooner or later, we’re going to lose Auba through injury or whatever, and possibly one of the others. Where do the goals come from then? The trick is having strength in depth across the squad, not the strength of the first choice eleven because we won’t have all of them for many games as the season progresses.

That seems needlessly pessimistic. Most players *don’t* get injured for any significant length of time in a given season.

Have you been watching any of Arsenal’s games at all?

How many time have we ever lost Auba to injury? The most we ever had Auba unavailable for was three games and that was because of that needless red card last season (probably against leicester or everton, can’t remember which).

Why would you leave them out?

I understand what your saying. It would be very hard to score playing a 4-3-0 formation with noone up top.. hahaha

So he was a gilberto but now we are vetting a full blown vieira. Beautiful. Still gutted why we didnt get yaya toure all those years ago but well i guess this is it. Bona fide midfield general.

In an interview with Sid Lowe in the guardian Cagigao alludes to it being beaurocratic hurdles from the uk (hope office, I think It said?) that frustrated and ultimately doomed the signing of Yaya toure…

“Wayhayyyyy”……sound of Tommy’s handbrake being released

It’ll be interesting to see what happens in terms of formation now. I think Arteta will want to implement a 4-3-3 long term, with a narrow midfield 3 of Partey, xhaka and Ceballos and then have 3 of auba,laca,Pepe, Willian and Saka up top. Hopefully Partey will be the key difference, as we’ve looked shit every time we’ve tried to play a back 4 in the last 12 months. Having said that, I’m actually pretty confident because Tierney and Gabriel are definitely more solid at the back than anything we’ve had in a while. Cautiously optimistic times 🙂

Think we should play a 352 against city. Load the midfield and play auba and laca/pepe up front. Tom, Ceballos and xhaka midfield with Saka and bellerin wingback

I still believe Eleny Partey Ceballos is the way to go for our 4 3 3, Eleny at the middle while Partey at the right while Ceballos at the Left.

Well maybe that’s the best way to play him, imagine him playing full throttle and ends up injured, we have no back up.

Will be too soon likely for the weekend but hopefully we unleash him soon.

Cagigao, “I think Unai is a very good coach. We got to the Europa League final and finished one point off Champions League qualification in the league. It’s a very fine margin which sometimes separates perceived success from success.” I truly believe a few cancer in the team caused us the Europa league title last year. Essentially the same team (minus Pepe) that beat the top 3 team in the league, won the FA cup this summer was a mess when we lost to Chelsea in Baku. If Unai is a very good coach, how did he lose the dressing… Read more »