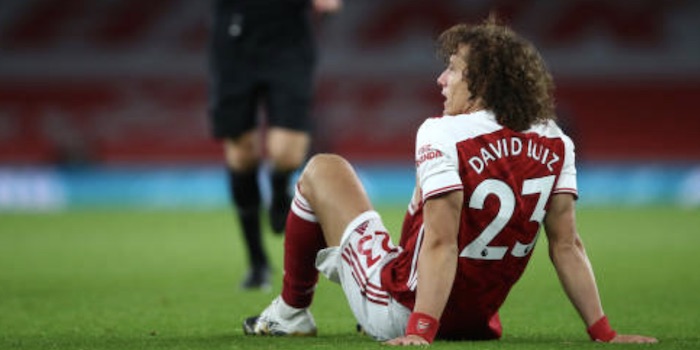 David Luiz has ‘no chance’ of playing in tomorrow evening’s Europa League clash against Dundalk, and is a big doubt for Sunday’s trip to Old Trafford.

The Brazilian had to come off just two minutes into the second half of the 1-0 defeat to Leicester last weekend, and his injury adds to the litany of problems Mikel Arteta has to contend with in the central defensive areas.

Although Shkodran Mustafi is back from his hamstring injury Rob Holding and Pablo Mari remain sidelined with the latter now well beyond his initial return date of late September following ankle surgery. Calum Chambers is still making his way back from the ACL injury he sustained in January, while William Saliba is available in the Premier League but was not registered for the Europa League.

It leaves the Arsenal boss with some serious thinking to do when it comes to his team selection against Dundalk, with an element of risk involved if he picks someone like Gabriel who will be so important for the Manchester United encounter.

“We try to go game by game,” said the Spaniard, “but obviously in the last ten days we’ve had a lot of issues at the back with the central defenders.

“We have to be cautious that we manage that position very carefully, because if we lose another one then in big trouble.

“So, of course we have to keep an eye on how we’re going to manage the squad in the next two or three games.”

With that in mind, chances are we might see something of a makeshift central defence for Arsenal tomorrow night, perhaps a pairing of Shkodran Mustafi and Granit Xhaka, or even a three with Sead Kolasinac involved too.

Meanwhile, Willian could play a part having missed the Leicester game, while Bukayo Saka has been training as normal despite taking a kick which forced him off against the Foxes.

I am here to laugh at those who were opposed to the transfer of David Luiz from Chelsea and will be saying that we will miss our most important player.

Nobody doubts his talent, it’s his lack of concentration at times that’s infuriating. He can be terrific on his day.

A Mustafi-Xhaka-Kolasinac defence? You don’t want to miss that one!

EL Neny did a job there in before.

Elneny was actually pretty good (relatively speaking) in that position. And it is clear Arteta trusts him generally. I think this makes a lot of sense – could help to prevent the need to switch to a back 3 and/or play Tierney (who he may want to rest for the weekend)

Maybe let’s use the kids instead.

Utd will be smelling another 8-2.

Per Mertesacker anyone? If Chelsea can draft Cech in I say we get the BFG back for one last hurrah 🤓

Er Saliba, we still have him. Even a greenhorn will be better than mustafi or koloss alot

Salibaba and the Forty Thieves
Reply to  Ray Middleton

The article says that Saliba wasn’t registered in the Europa League squad.

He won’t be a possibility until January

Can Mertesacker be registered like they did with Cech?

Isn’t there a talented young centerback we could play there Thursday? Not worth risking anyone we need in the weeknd in my oppinion.

Timorous Me
Reply to  Andreas Albertsen

Looking at our official squad list, it appears there are some kids available as midfielders or forwards, but no defenders except for Joel Lopez, a left back. Must all either be out on loan or don’t qualify.

this is so arsenal , 9 CB’s before the transfer window closed , now we are short at that position , with none of them sold!

Imagine having a very promising and highly-rated center back at the club, but instead of playing him in this kind of games you just can’t register him because instead you chose to buy and put in a non homegrown 25 yo goalkeeper that was backup at Dijon Mustard Team, who’s, astonishing, not even going to play in the competition. FFS that’s one of the dumbest decisions I’ve ever seen in my lifetime

You have no idea why these decisions are made, so maybe hold off a tiny bit before you make exaggerated sweeping statements.

I am as clueless as you, but there were reports that Saliba lost his mum recently. Coupling that with the idea of moving to a new country whilst basically still a kid and not knowing the language, it makes a hell of a lot of sense to let him settle in his own time until January then register him then.

So just chill, we can make do without him for a little while.

I totally understand that. And giving Saliba time to settle in London without playing or going on loan would be exactly what Wenger did to Edu when he joined after some family issues and homesickness. But Saliba was at least at the bench in one EFL game, and his crew keep saying that’s he’s fine and ready to play, and these Europa League games in this “easy” group would be perfectly fine for him to get used to our team, pressure and London. That said, and giving that we had a lot of difficulties in registering Özil and Sokratis too,… Read more »

This is a good chance to play 4 at the back. surely any of our squad players should be able to cope with this match ? we shouldn’t be scared of Dundalk, should we ?

Respect, we should be professional and respect the other team, their coaches and fans. It would also be nice if we respected our players and coaches who will make tough decisions and play to the best of their abilities to respect The Arsenal.

I guess we needed 12 CBs to start the year.

Move Xhaka to the back or Tierney and use AMN as LB/LWB.

I’d rather we didn’t play Saka, to be honest. I think he’s playing too many games for his age and I’d rather he took a rest until the weekend.

Eight central defenders and we are in a crisis in that position. In God we trust.

Yes, but not very sure about Bergkamp playing as CB.

Who is going to create the few chances the team creates?? Especially as the club registered 5 GK and no 10.

There goes our forward passes.

We have a squad that is there for such eventualities, but what a number of comments are suggesting that is isn’t strong enough. We’re still only in the early part of the season so we can expect to have more injuries, suspensions etc. as the games come thick and fast and we’ll need everyone who is available to step up – be it against the Dundalk’s or Utd’s.

We should have included Sokratis in our squad till January and taken out another CB who was injured for long term. This is another example that our club is run by donkey’s.

I can’t agree with you more

maybe some of these players are not fit enough to start. if we need to play more first teamers in this game , i would have serious concerns about the squad players. no disrespect to dundalk , but this is a game we should be winning , even with fringe players.

We’re stuck with Mustafi then.

What kind of evil did we all commit in a former life for Karma to do this to us?

We went to matches and boo’d whenever any of our defenders made a mistake?

Absolutely baffling that Sokratis and Saliba aren’t eligible. Some very questionable decisions have been made behind the scenes. If Saliba isn’t good enough to play Dundalk then he’s not our guy. Here we are years later with Mustafi still in the team.

I think it’s combination of incompetence and lack of transparency from the club staff. There just doesn’t seem to be much foresight in their decisions.

Saliba is a good player and wouldn’t have left the St. Etienne academy so early if he wasn’t.

Besides Allan Saint-Maximin, the most valuable academy graduates from ASSE are defenders. This list includes Zouma & Fofana

I don’t get why Mari with his injury situation, was registered instead of Sokratis! Atleast they could have played it safe and included Sokratis in EL or PL list!

How bad can Saliba possibly be to not try him? We paid 27m quid for him. That Arteta deems Mustafi more reliable…

Luiz, why offering another season extension a mere band aid and at that not a very effective one.

Sokratis of course not an option for whatever reason.

So maybe Mari and Chambers on the mend. Really, all these cbacks and we can’t figure out a workable system. Too many changes, not enough regularity.

The level of opposition we face these days (and how we flatter to deceive) but you’d think we could at least give Saliba a go at it. 27m Just saying. Crazy spend for an unripe player. Again this bespeaks the idiotic system we have with insufficient say by gaffer on transfers. Emery was NOT well served by Mslintat and Sanlehi nor Wenger. The players brought in like Mhkitaryan were not what we needed to balance out squad or band aids at the back or unncessary (Cedric instead of pushing on AMN at Rback) Again this summer word has it (not… Read more »

Chambers’s injury was in December versus Chelsea, a match in which he also had an assist to Aubameyang for the only Arsenal goal off a Mesut Özil corner in Arteta’s first home match. This is not an important correction to make AT ALL, but it was at the one and only match I have ever been to. I think back all the time about how lucky I am to have been able to get over to see a match in person. Even in a pre-COVID world, traveling to North London to see the Emirates as a part of the skyline,… Read more »

Only Arsenal could have half a billion centre halves on their books – and then be forced down by circumstances to playing Mustafi – less than two months into the season.

Ooh, I’ll make a guess at this… Sokratis isn’t home grown and all our non-home grown players chosen for the squads were players Arteta had more confidence in than Sokratis?

Let me know how I did. I’m looking for work and ANY qualification is useful.

You pulled it out of your ar$e? That would qualify you as condom tester.