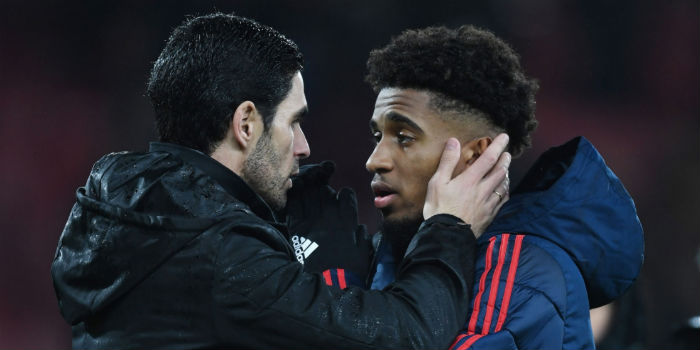 Mikel Arteta admits Arsenal were weighing up sending Reiss Nelson out on loan but decided to keep the England under-21 international when he expressed a desire to stay and fight for his place.

Having made only one start so far this season – against Leicester in the Carabao Cup – the winger may be wondering whether he made the right decision but the boss maintains the academy graduate will get opportunities to play as injuries and a packed schedule take a toll on his squad.

Facing the press ahead of the Gunners’ Europa League group stage clash with Irish side Dundalk, Arteta was asked why Nelson, in light of his lack of minutes, was retained.

“It was mixed reasons, Reiss was really convinced that he wanted to fight to stay here,” he explained.

“And when you see that willingness and that passion and that security in a player, you feel tempted to keep him even though you know that opportunities are going to be restricted and he is not going to have a lot of continuity in his play.

“We ended up with a large squad at the end of the transfer market. We had a few plans in mind with Reiss. One of them was as well to send him on loan to get more minutes because of the competition we have upfront.

“But things change very quickly and if he starts playing, and playing well, and he does what he can do, why not? He could start to play more games.”

He added: “The reality is he has been really good in training. He wants to stay here. He wants to fight for his place.

“That is what he is doing and he is going to get the chances in the right moments. What I am pleased with is how he has assimilated the situation – not playing a lot of minutes in the first few weeks.

“As everybody can see, things are changing very quickly. We are getting injuries. We will get more injuries because of the schedule that we have and he will get the opportunities. Then it will come down to him to take them or not.

“I try to have a very open communication with the players and try to get the doubts out of their mind, and try to talk clearly when they play or don’t play the reasons behind that.

“Most of the time they haven’t done anything wrong, it is just because there is a lot of competition for these positions and we are favouring other players in that moment. That’s it.”

Give him and ESR a run out tomorrow we have got to try something to inject something into this team. We are playimg lovely football at times but just lacking that creativity

Arteta does need to give the players either the freedom to express themselves going forward or create a structure on the pitch and a gameplan that gives them more variety in attack (i.e., a roaming attacking midfielder of some sort to link up play in the final third) — that will help all of our forwards by giving them more chances to take, as it were. I’m sure we’ll see that on either side of the United match.

Yes, it’s only weeks into the season but it’s likely everyone will be called upon sooner or later and they will all have to step up. So good luck to Nelson, “Arsenal expects…” and all that.

Nelson needs one eye on the prize.

And to watch out for “jigging in the rigging”?

Stop with this passion and willingness b*hit….just give Nelson, ESR, AMN, Willock and Eddie a run tomorrow. For complete 90 mins. If you don’t see them play, how will you judge them? And it’s not that the senior team is setting the stage on fire…

That’s a bit thick. What you mean is if *you* don’t see them play how can *you* judge them. I’m quite sure Arteta doesn’t really care what you think, to be frank. He has the benefit of actually seeing them every single day, so he probably has a pretty decent idea of what they can offer!

Training is not the same as playing a real match. In training you can only pit players up against those they already know well. On a matchday you play against completely different players with their own instructions. You cannot totally replicate it so Arteta cannot know how they will perform unless he gives them opportunities.

I don’t see how much worse he can be to Pepe or Willian or playing Auba on his uncomfortable side.

Against opponents on Thursday, we should be giving Nelson a chance out right and Saliba a chance at Cback.

Saliba ain’t eligible for the Europa 😒

Even if they get a run-out tomorrow, what the hell is 90 minutes against a third rate team from Ireland going to tel us?

Let’s not kid ourselves, there’s only competition in the wide positions because Arteta keeps playing strikers there.

Saka has played mostly in central midfield or wing-back. Whilst only Willian and Pepe have started most of their matches on the wing. Martinelli is still injured until next year

Nelson’s most productive position in terms of output and ball progression at Arsenal has been at LW. I wonder if we’ll even see him there this season.

Did he okay LW or RW at Hoffenheim?

From what I saw he played left wing. Scored a few cracking goals too.

He played and scored in both positions at Hoffenheim. I would say his best games (dribbles past players, assists, quality of goals scored) came from left wing.

Nelson tends to control the ball with the outside of his foot so I think he’s more suited as an inverted winger changing direction late 1 v 1.

At Hoffenheim, he played like Sadio Mane and looked very dangerous on turnovers. He also played with his socks up lol 😆.

Cannot be any worse than Willian or Gervinho mkII

He needs to be given a chance so that he can take it. I like Reiss, he’s good on the ball and can score goals, he’s certainly no worse than Willian or Pepe most of the time, he needs to play tomorrow.

With Willian, Pepe and even Saka being inconsistent, he will have a chance sooner of later and he will have to grab it. Learning from Willian who isn’t the fastest but always manage to find space to put in a cross or the timing of run will be great for his development.

Perhaps, but possibly he is being blocked from learning by said players. I think Willian was a mistake

What is this, Nelson’s column?