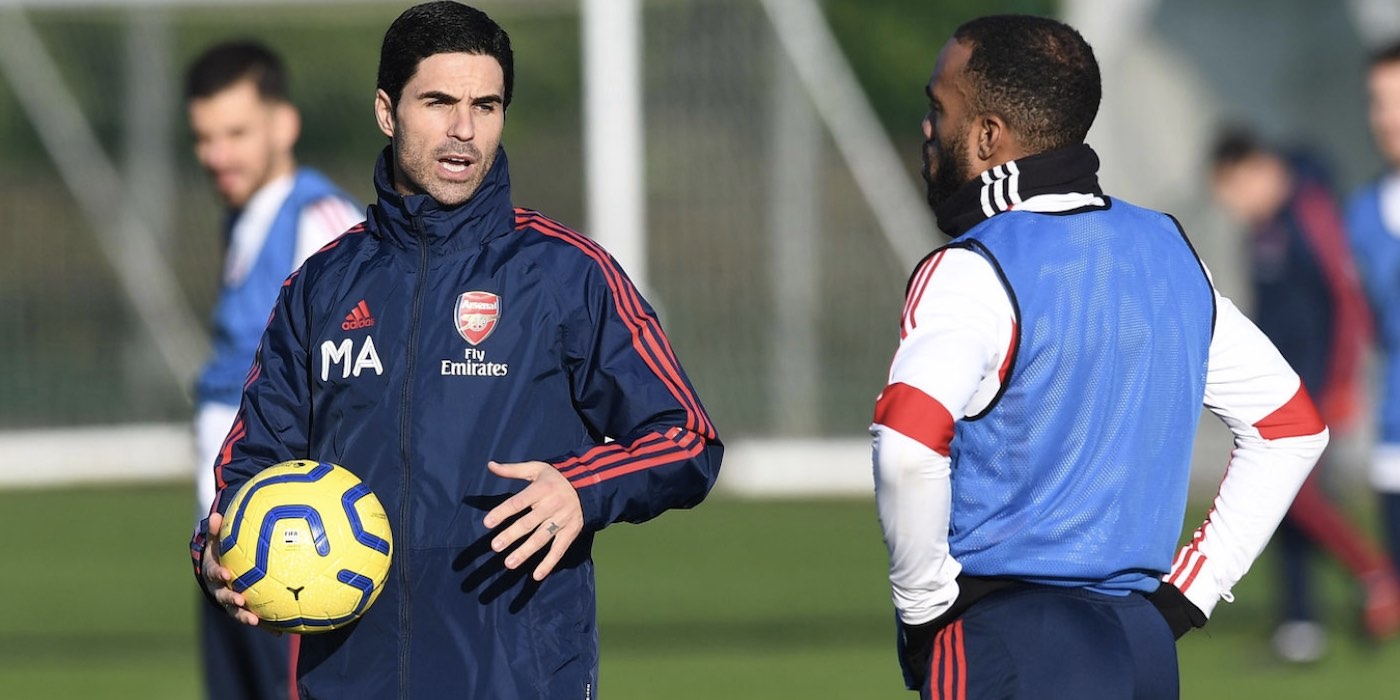 Mikel Arteta says that he’s aware the team need to improve from an attacking point of view, after two successive Premier League defeats.

In the first half of the 1-0 loss to Leicester at the weekend, the Gunners had 11 attempts on goal, but just 1 in the second period. Failing to capitalise on good opportunities in the opening 45 minutes came back to haunt us as Jamie Vardy headed home a late winner for the visitors.

Thee Arsenal boss was pressed on the need to get more out of his strikers, but insisted it needed to be a collective effort, starting with his own work.

On the need for attacking improvement, he said, “It is the role of everybody, first of all mine to give them the solutions and structure to attack better.

“When we are at home and we’re not able to score a goal, I am concerned. I am concerned about the second half, we should have done better, we only had the chance for Hector.

“It is something we have to improve in the final third, the solutions we have to give them to attack better, to be more continuous, to be able to sustain attacks in longer periods and put the ball in the box more.

“We have been working on that so hopefully we can improve it.”

And despite frustration at the loss, Arteta was in some ways encouraged by the way Brendan Rodgers set up his team for their visit to the Emirates.

“Obviously this block and the way they set up is not easy at all,” he said, “but we opened them up five or six times in the first half and should have scored a goal.

“It is something we are not too used to because we have not faced teams like that too regularly but I think it is a really good sign when Leicester suddenly comes to your house and acts like that, it is because they really respect you now and they are concerned.

“We have to take that as something very positive and and as an advantage because if teams are going to start to do that, I’m telling you we are going to win a lot of games.”

Let’s hope so, because while everyone can see it’s a difficult thing to break down a formation which has 11 men behind the ball, we still have to find a way to make chances and, more importantly, take them.

Well, like the saying goes “attack is the best form of defense”

I can’t wait to see Arsenal score 13 goals like Ajax did.

I don’t expect any of us can, but we may have to wait a while yet. Frankly, I’d be quite happy to see us get a mere three goals in a game again (assuming we didn’t concede three, or even four, of course).

We only need 5 more, with 32 games to go. It’s possible, even probable.

We did in early 2010s but conceded 12 goals in process

Get Pepe working.. solve that and you have goals covered it’s obvious he has no confidence now .. our biggest attacking talents are Auba Saka and Pepe and right now only one of them looks functioning.

I was salivating listening to blogs and James discussing Saka, Auba, Pepe.

I know it’s wishful thinking, but why can’t this happen? Why is it that seemingly logical things just don’t happen?

Saliba deemed not good enough for Europa League ties against Dundalk. AMN gets frozen out after we reject £20m bid. Ozil has no use, even as an impact sub. Reiss Nelson can’t get a game in any competition.

Sometimes I get so confused…

Well said, J4H. Not a lot wrong with Auba up front as a central striker, flanked by Pepe on the right and Saka on the left. It’s ridiculously simple in many ways; why complicate matters – especially when the alternatives are clearly not working? If these guys can make the runs in the channels and Willian and Ceballos finally wake the fuck up, then we might start scoring again. Beyond that – you’d have to chalk this season off in terms of qualifying for the ECL and wait for another loan from Stan in the summer to fund an attacking… Read more »

Arteta is trying to make duck à l’orange when we need meat and potatoes.

Best players. Best positions. Give it five games and see where we are then.

It’s obviously not that simple. Or is it?

What is our best lineup when everyone is healthy? I think we’re really missing Martenelli. He will feel like a new signing when he returns.

I like this line-up, it’s my Fifa go to haha

Still not sure about the midfield. Could Partey play further up and have a more creative role? Not convinced either Ceballos or Xhaka have the necessary requirements to be anything other than average ball players.

Will Arteta make the changes necessary? I imagine that it’s difficult for any manger to do it as he’s really saying, “I was wrong before”. Wenger didn’t/couldn’t quite sometime before the end. This is Arteta’s first full season as manager of course so does it make it more or less easy for him? Don’t know, but as you say we’ll see.

I know we talk about comparisons to Liverpool a lot. But they are a good beacon of where we could get to and how to get there.

Klopp doesn’t alter tactics regardless of who he’s playing. He doesn’t play false nine’s or have different attacking shapes to defensive shapes. He puts out specialist players for their positions.

I don’t know why some managers feel the need to tinker tactic’s on a micro scale. We should be able to trust a £72m winger and a world class striker to know what they are doing.

At last! Spot on Biggs. Arteta has set his stall out. We can wax lyrical about not having the players to implement the attacking formation we all want to see but for him to change into an offensive manager will mean he’ll have to admit that from the off his set up was incorrect and i personally feel he’s too stubborn to do this. As in Aw’s last few years i am seeing in Mikel Emery the distinction of doing the same (wrong) things over and over and expecting a different outcome.

In a game like this in the Europa League, why not give AMN, Saka or Nelson even a go in the traditional #10 role? Saka has the close ball control and creativity, AMN has the calmness and runs into the box and Nelson like to dribble and commit defenders.
All better options than an empty space. Might even be one of those internal solutions.

I had forgotten about ESR too. He could be an option for the future.

Couldn’t agree more. Continuously doing the same bloody thing and expecting different outcomes is utterly absurd. Sad to say that I’m looking on enviously at Mourinho’s ability to get Sp*rs clicking and scoring whilst we’re unable to do anything other than create pretty horse shoe passing around the back patterns…. Its honestly quite pathetic that the array of talent in our team can’t spend anytime whatsoever in meaningful areas of the pitch. IMO the system is solely to blame for this. The rigidity. The inability to capitalise when we win the ball in the opposition half is really poor. We… Read more »

Certainly needs improvement – but so does the defence as we’ve conceded in every PL game except the opener of course. Probably easier (and more accurate really) to say “We’re working on improving everything.”

I Now Partey is here wouldn’t mind seeing a reversion to the old 4-1-4-1 (or a 3-1-5-1) we used to deploy. It might help us in transition, a better midfield pivot, and unlocking packed defences more more. And we have attacking talent we can rotate into that formation.

To be completely honest, I’m not that worried. Chelsea lost TWELVE games last season and still ended up in the top 4. And this season seems to be more competitive than the last if you ask me. Everyone will drop a whole lot of points, including us, so just relax my fellow reds.
Love the confidence in that last bit. FUCK YEAH we’re gonna win a lot of games Mikel. I’m giving you not 1, 2 but 3 seasons to get this party started. It’s a marathon guys, just like investing. Brew that stew slowly 😊

What I want to seem most from Arteta this season is the phasing out of the pedestrians in the team.

I still feel he’s playing with another coach’s squad and not his own.

im not buying it. he had plenty of time to get rid of deadwood and get additions.

its all talk from Mikel. Results matter

No sir, Leicester have been playing like that for a while, won the title like that, sitting back and playing on the counter. It’s time to may be, look inwards and tweak the system a bit, its not as fluid on the ground as it is on paper. May be also start to play players in their position and let them express themselves a bit. Thanks

learning on the job. Shouldve sorted out the attack by now!

mikel is a master of positional play, but against low blocks his central midfield pairing didn’t give enough support to a very direct approach. Now with the security and control that Partey provides, it may allow the other midfielders to support the attack vs a low block and we might see some interchange of positions. For example Willian swapping positions with Ceballos. With Partey’s pace, we will also be a little less vulnerable to a two pass counterattack, meaning we can afford to push up as a team more and box in the opposition. This means we can attack in… Read more »