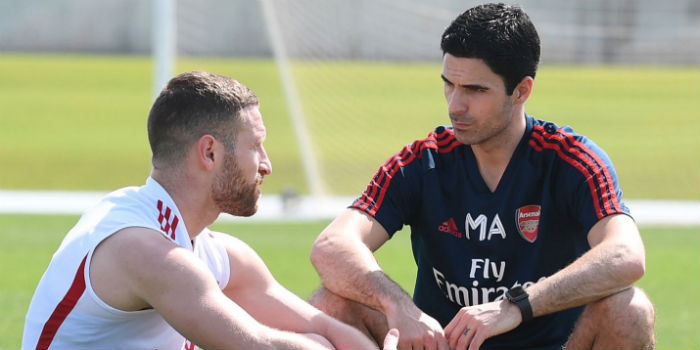 Mikel Arteta has refused to be drawn on Shkodran Mustafi’s future at the club following reports that the World Cup winner has turned down the offer of a new contract and will look to leave the club as a free agent next summer.

On taking over last December, the Spaniard seemed to make it a personal mission to rehabilitate the German’s ailing reputation, bringing him back into the fold and giving him regular game time even after he made mistakes. Happy with player’s attitude and progress, he seemed to be open to retaining the 28-year-old.

While that may not come to pass, the boss seems to have plenty of trust in Mustafi who, despite only just returning from a hamstring problem, is likely to get plenty of minutes in the coming weeks in the absence of injured peers Rob Holding and David Luiz.

“Mustafi is completely fit to play and obviously the internal contractual situations will be discussed internally,” said Arteta when asked about the speculation.

“I have been really happy with Musti since I joined and the performances that he has had.

“It is true that he had a long-term injury, he has worked so hard to get back into the position he is today.

“I just want him to show again the trust we have him in, play him and get the performance we have had in the past from him.”

On the confidence that he helped return to Mustafi, he added: “I think there were a few cases when we joined in that position and what we tried to do it is help the players as much as possible, encourage them to play with confidence and try to give the right solutions and then it is up to them to show with their performances where they are.”

While he may have one eye on leaving Arsenal, Mustafi admits he’s enjoyed working with Arteta over the last ten months. Having a clear understanding of what is being asked of him has been a vital part of that.

Facing the press ahead of the Gunners’ Europa League game with Dundalk, he said: “From day one, everyone believed in what he was trying to put on the pitch, how he wanted his team to play.

“I think it made it easier for every single one of us because when you know what you have to do, when you know exactly what’s going on on the pitch and how you have to play your part to make the team strong, it’s what helps the most.

The German has also been impressed with the way training sessions have been organised.

“I have to say, I have never had such detailed training sessions. We are working in great detail about everything. Of course, we try to do our football first but then we analyse the next opponent and see where we can defeat the opponents with our strength.

“He always has an idea of how he wants to play the next game and not every game is the same. He analyses the team so well that when we go to the training pitch, he knows exactly what he wants to do, what we have to train to then be prepared for the weekend.

“That’s the positive thing, when you go into the game you have that picture that you had in the training session, you have the same picture in the game and that helps you a lot.”

He never had the makings of a varsity athlete.

We need to remember that just because certain players have spiked performance wise and had a new lease of life under Arteta, they still aren’t good enough to play for Arsenal.

It’s time to bring in the new dawn.

Just totted up this list and I make it around £180m outlay.

Probably now worth a combined £30m. How do we do it?

Laca and Ozil used to be good. Laca might be again.

Arteta needs to help Laca regain his form. In a good form, he can score 20 goals a season. I was comparing our attackers to the despicable rivals. Auba vs Kane, we’re good there. Son vs Laca, Son wins. Bale vs Pépé (we lose badly) and they have Dele Alli vs who? Ceballos? Laca? (tie with advantage to them).

All of these players were brought in to push us to the next level. But the truth is they’ve merely contributed to our regression.

There are, of course, other factors. But that’s the cold, hard truth.

We needed to say most of those goodbyes 2 or more years ago under a different coach and a different management structure.

We definitely needed to this year under Mikel, Edu and Vinai,

I’m starting to think the new dawn is the same old over paid mediocre players with the additional figurehead of Mikel who can talk the talk and paper over the cracks.

Too comment. First sopranos quote and it flew over everyone’s head.

If stories about an extension are true, I find it almost inexplicable. Yes, Mustafi has turned in some better performances recently, but that’s not saying much considering the defensive disaster he has been for most of his time with us. On balance, and it must be taking everything into account, we should not retain his services and save the money on the wage bill. We need to be ruthless where required. Mustafi just hasn’t been up to the standard required (which other “top PL team” would play him?), so good luck and goodbye come next June.

Cant believe we emptied 35m on him

Neither did Valencia at the time – they couldn’t believe their luck. The fee we paid made him, until quite recently I think, one of the top 5 most expensive central defenders in the PL! What a thought.

werent you in sapin at the time and the joke was you the laughter could be heard from valencia all the way in madrid?

Liverpool would play him at the moment. Then again Liverpool have enquired about the availability of inanimate carbon rod as a means of alleviating their defensive woes recently…

If this was Football Manager I’d give him a new contract and then shift him in the summer.

I wish this was Football Manager.

My only hope is, Arteta is applying the lessons he learned from the Guendouzi disaster.

I think Mustafi is a very good defender who makes far too many mistakes. But Liverpool played Lovren and Man City played Otamendi, and neither is any better than Mustafi. Even top clubs have trouble putting two top centre halfs on the pitch. Even Bayern and Real Madrid, Barca and Juve can’t do it. Toure/Campbell and Ferdinand/Vidic are mostly a thing of the past.

From the quotes James Benge reported, it didn’t sound like someone who had been offered an extension. I do wonder where this story came from.

All this information adds in to the Mikel Arteta = control freak theory.

Even if we have offered him a new contract, it would have been much lower than his current wages. That could be the reason why he rejected it. It doesn’t make sense otherwise to offer him a new contract, even if it is to get some transfer money next summer.

He’s got a good agent and he’s our best creator.

He being our best creator in the current scenario can’t be helped. However, it would be a terrible mistake by our management if we are still relying on Luiz as one of the chief creator next season as well.

I’d keep Mustafi over Luiz any day. At least Mustafi only really makes mistakes when his teammates are making many too, whereas Luiz can turn a comfortable situation into a disaster. Mustafi’s problem is his lack of confidence; Luiz’s problem is too much confidence.

Hold on to that, we all need hope.

when the big 5 are out in the super league?

When you read a article like this you immediately realise everything that’s wrong with Arsenal Football Club right now. A player like Mustafi isn’t and never was good enough to play for us. The fact that he was even offered a new contract is staggering. This just shows you how hopelessly bad we are being managed at the higher levels. The way that resources are being squandered is criminal. We need a quality playmaker but we hand a 32-year-old Chelsea reject a 3-year contract instead. We need a top centre-half but buy a very expensive 19-year-old and then don’t play… Read more »

I would love to be a fly on the wall at Highbury House when contractual negotiations are taking place, though the weed smoke would probably kill me.

That is quite a decline.

Anonymarse
Reply to  Salibaba and the Forty Thieves

Nah its LSD or Shrooms.
Some of the trips they must go on to come to the decisions they do

Playing in a team like Atletico in a low block, he would excel.

I know he left in bad circumstances but with retrospect, wasn’t Laurent Koscielny absolutely fantastic. Of all the centre backs whove joined since Sol Campbell left he’s been by far the best. Also, what other centre back has been a success? Mertesacker?

Only Vermaelen comes to mind.

Please god stop being coy!!just don’t offer him another contract…
for the love of Jesus and he’s good mother

Mustafi is helping out. He is as is one foot out the door so to have him as an option is a good thing regardless if one thinks Saliba is ready or not. Considering we lost Holding and now Luiz, it is at very least good we have Mustafi (although I cannot understand how Arteta could not sway Sokratis over to performance considering he has to otherwise sit out till January at very least as well) Like Luiz, Mustafi is not going to be strong enough for back 4 (albeit today’s opponents with no disrespect should theoretically be easier) He… Read more »

What? Let Vardy get a free run and score