Arsenal began their 2020/21 Europa League campaign with a 2-1 away win over Austrian Bundesliga runners-up Rapid Vienna. It wasn’t particularly pretty but at the end of the day topping the group is all that matters, and an away win over the Pot 2 team from their group is a good start. 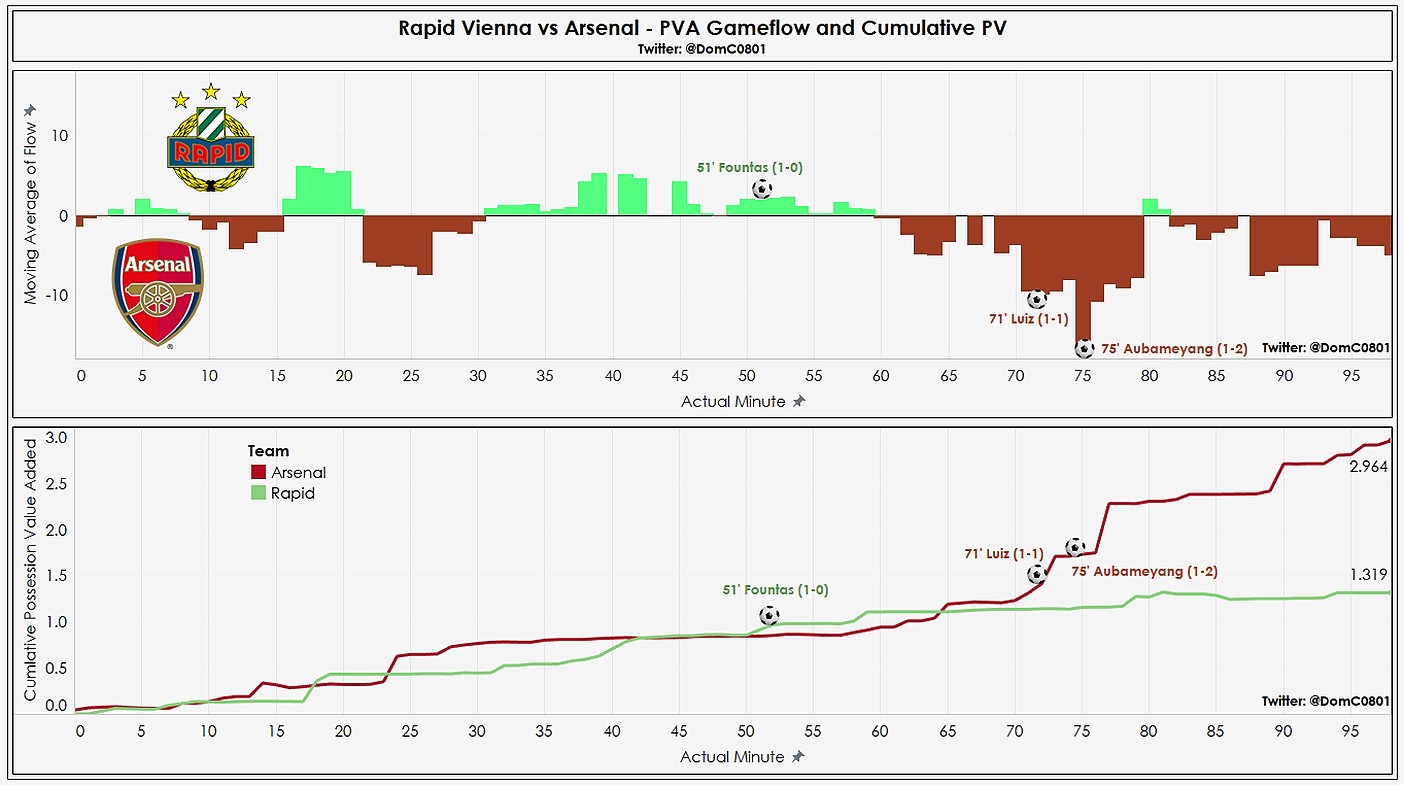 The above shows the Gameflow of Possession Value Added as well as the Cumulative Possession Value Added for both teams. Arsenal flattered to deceive for the first 65 minutes of the match, but from that moment onwards Arsenal dominated the game, ending with a PVA of 2.964 compared to Rapid’s 1.319. Arsenal struggled badly from the 25th minute up until around the 60th minute, coinciding with the substitutions of Hector Bellerin and Pierre-Emerick Aubameyang on for Cedric Soares and Eddie Nketiah. 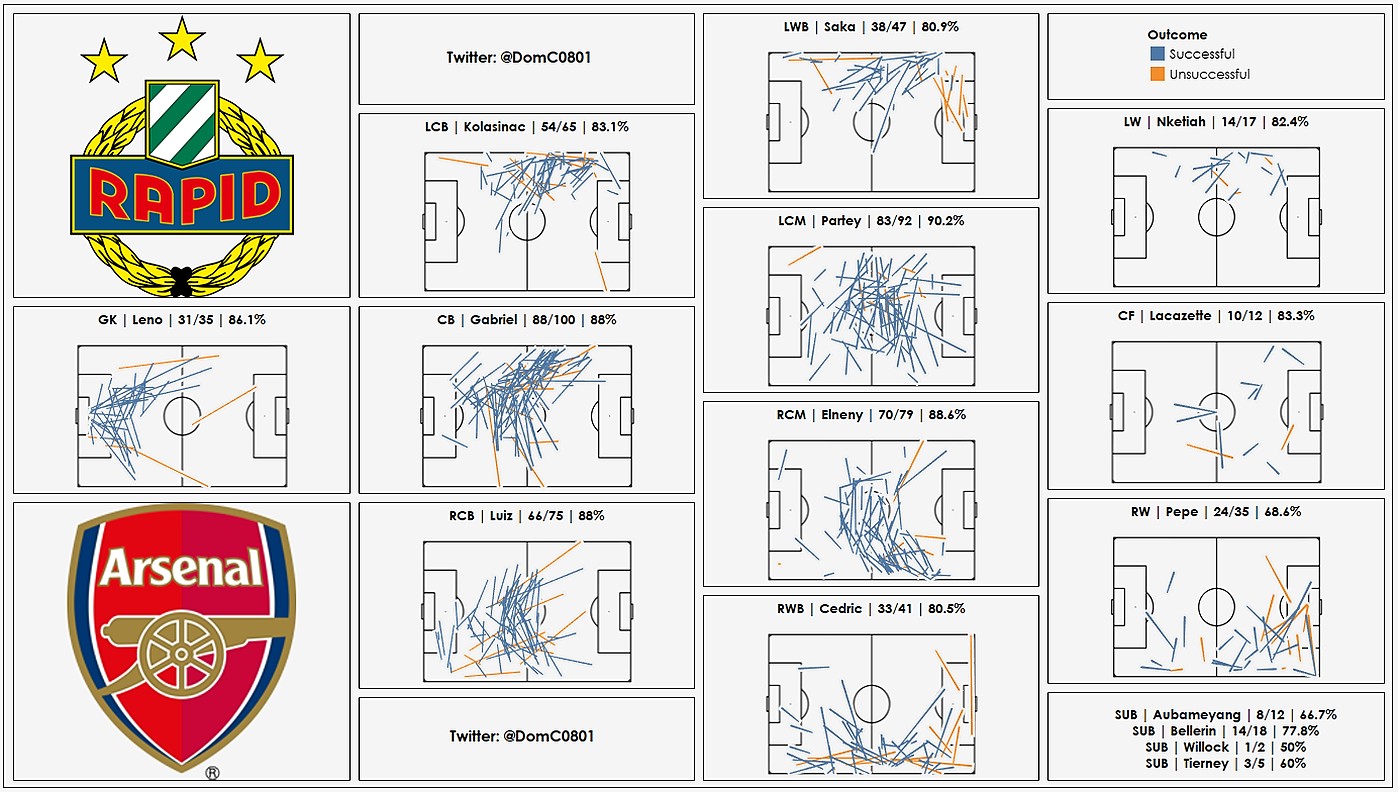 Above are the Pass Maps for all of Arsenal’s starting XI, as well as the passing stats for the substitutes. Thomas Partey, Mohamed Elneny and Gabriel Magalhaes stand out for their ability to progress the ball, with Partey completing 3 passes into the Rapid penalty area on his first start for Arsenal. Unfortunately Alexandre Lacazette and Eddie Nketiah (playing the Aubameyang role on the Left Wing which in my opinion does not suit his skillset) struggled to make any impact, with Lacazette failing to make a pass to a wide open Pierre-Emerick Aubameyang late in the second half, instead trying to dribble past a Rapid defender and losing the ball. Another noteworthy point is the lack of success the wing-backs, Cedric Soares and Bukayo Saka, had in crossing the ball, with the pair combining for only 1 successful cross from 9 attempts.

So which players added the most Possession Value with their passing and receiving of passes? 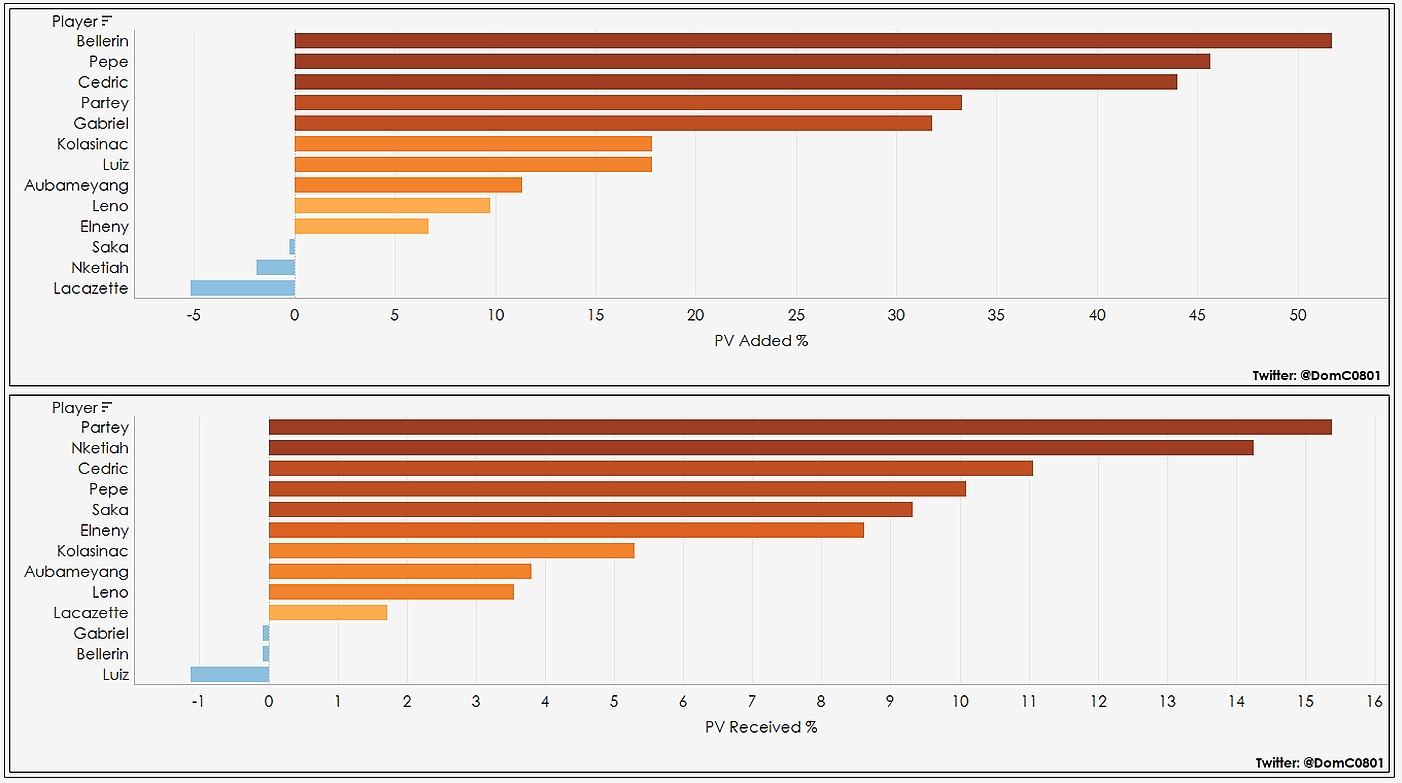 One thing to note here is that Mohamed Elneny’s through-ball to Hector Bellerin that lead to Arsenal’s second-goal went down as an unsuccessful pass due to the fact a Rapid defender deflected the ball slightly, so Elneny’s PV Added and Bellerin’s PV received are both negatively affected by this.

Hector Bellerin excelled in his 30 minute cameo, and the Spaniard and Aubameyang really changed the game for Mikel Arteta’s men. Thomas Partey meanwhile had a very promising first start, with the Ghanaian coming 4th for PV Added and 1st for PV Received showing he not only adds threat through his passing, but also adds threat by opening up passing channels with his movement. 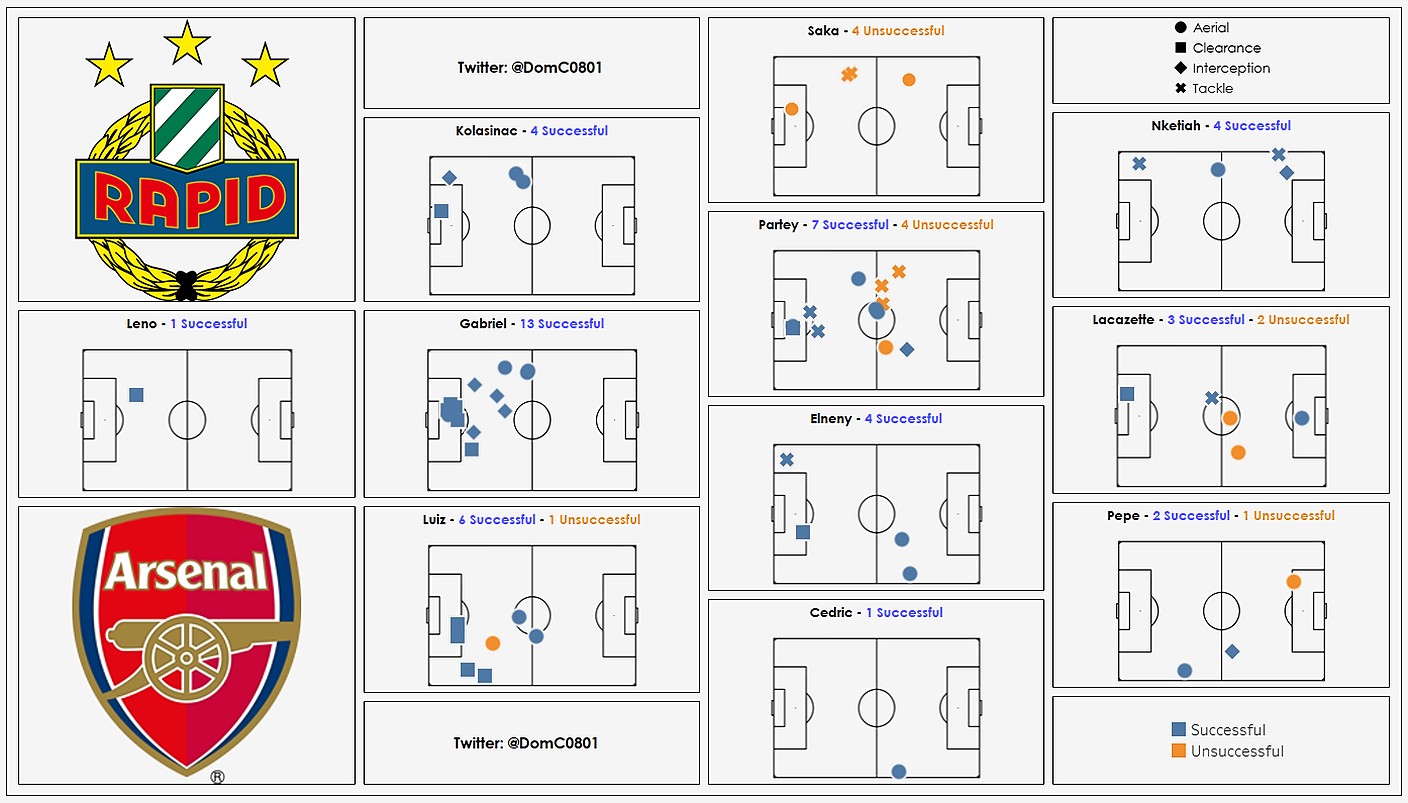 Above are the Defensive Actions attempted by each of the Arsenal starting XI. What really stands out is Gabriel’s phenomenal 13 successful defensive actions at a 100% success rate. The Brazilian has started brilliantly for Arsenal and has added an air of calm authority Arsenal have been lacking for a very long time. Thomas Partey also impressed, with the Ghanaian putting himself about attempting 11 defensive actions. 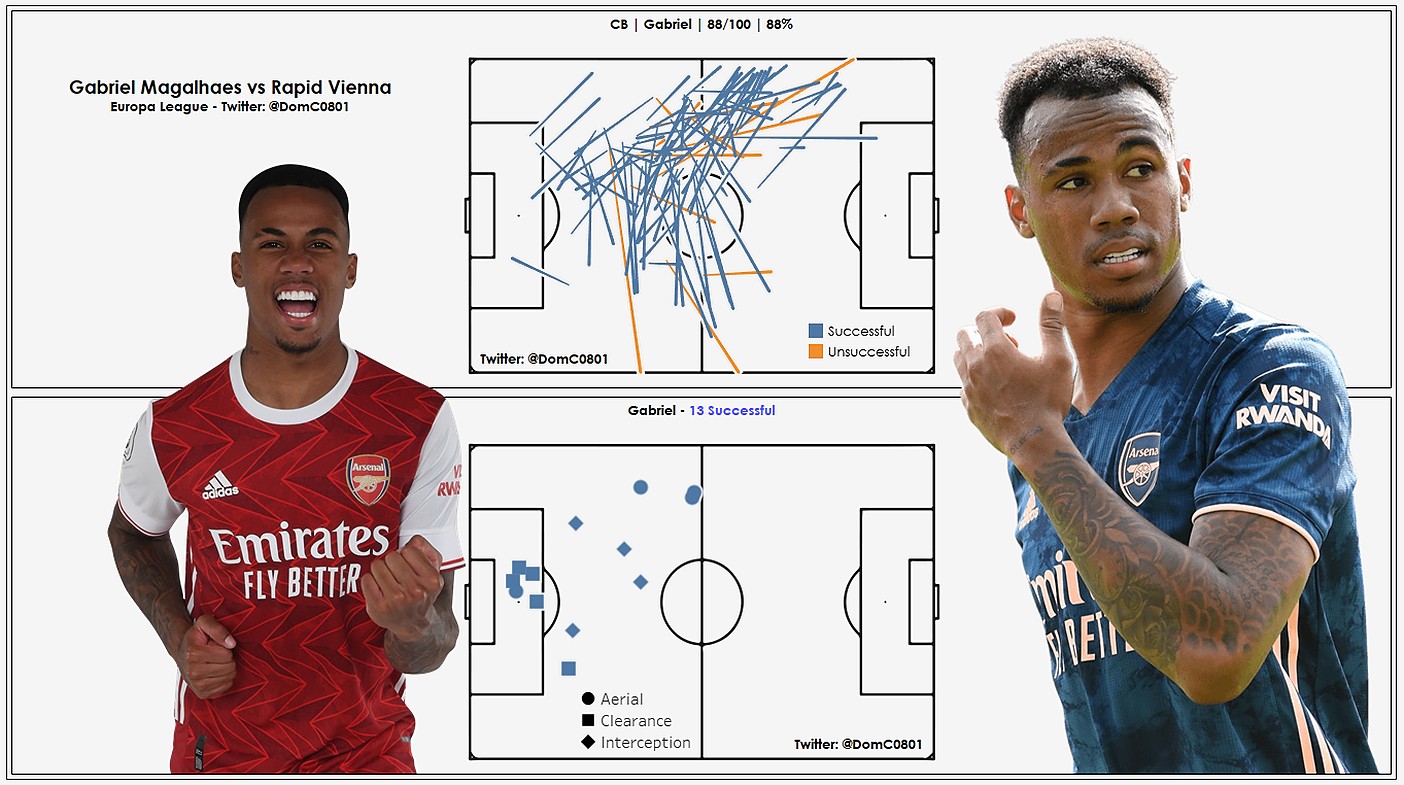 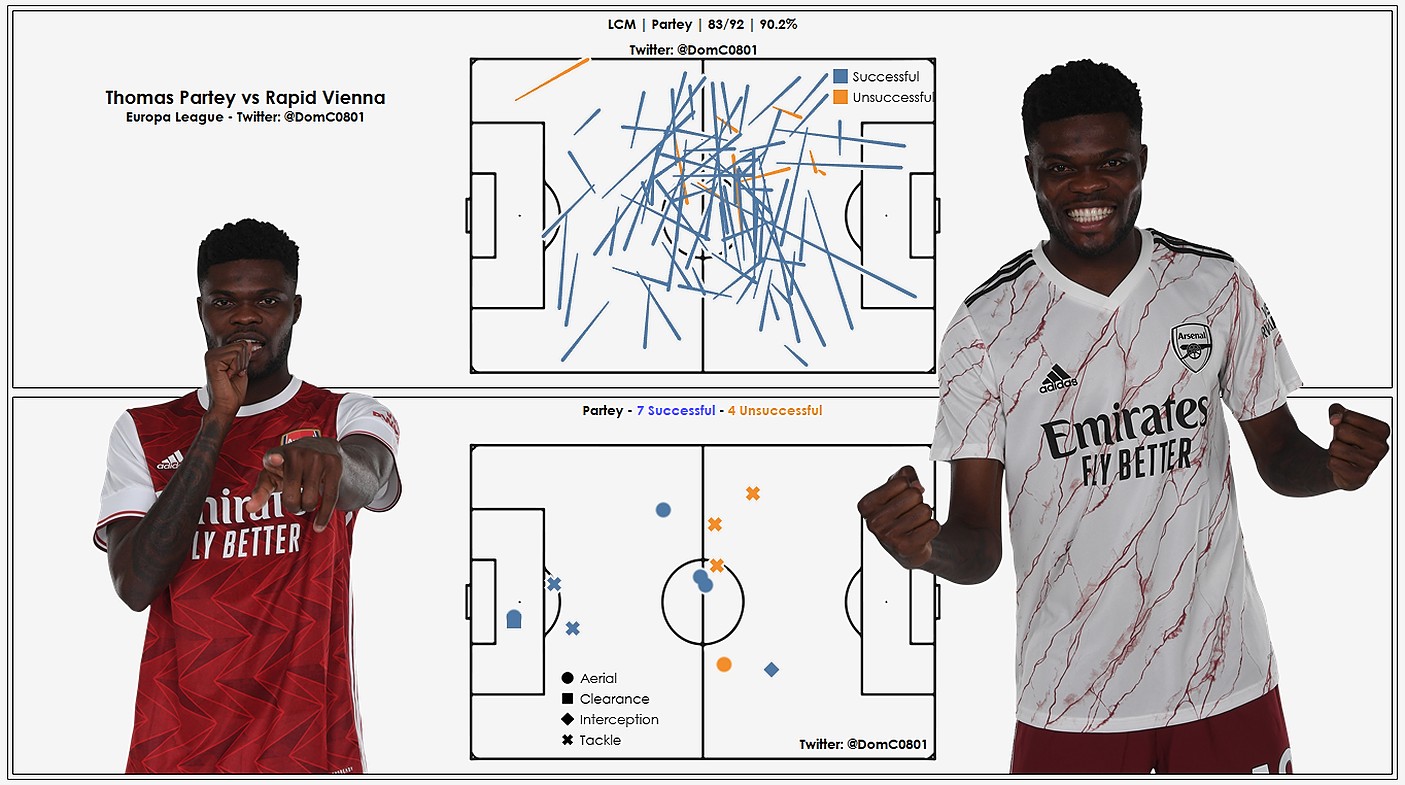 Next up for Arsenal it’s Leicester City at the Emirates with the Gunners hoping to bounce back from Saturday’s loss at the Etihad.

PVr is skewed to elevate the player responsible for picking the ball up from the center backs. That had been Xhaka’s role and he likewise led the team in this statistic.

In the Emery days the player responsible for picking the ball up from the centre backs was the opposing attacker.

While I agree with you and don’t like Emery very much, I think I have to credit him here. He was the one trying to get Arsenal from play through the back and it had some early mishaps. When Arteta arrived, players were doing that for some time and it made Arteta’s work easier and with less mishaps

I think you are a very generous man goodly Gunner. Both Emery’s press and play out from the back seemed ill-disciplined and totally random. Often the players would get so intimidated that we would go long against his will. I’m not sure anyone knew quite what they were doing. Have you forgotten the Watford 2-2 game? Every single chance they had came from our goal kick. Arteta in comparison seems well drilled and logical. Players make space and quickly find an out ball. Maybe Emery’s disaster helped in some way but it’s as likely that the players had heightened levels… Read more »

I have to say since that crazy game against Man city in the first game back from covid, David Luiz has improved a lot. I was happy to never see him play again after that game, but since then he has really won me over. Hope he continues his good form.

I’m very interested to see the progression of Mikel’s philosophy this season. His first remit was to bring structure to the team, which is plain to see he has. We have to be patient though. There are many issues with the squad that one (quarantined) transfer window won’t solve.
Just be mindful of the seasons where Pep was called a fraud at City and Jurgen was called a flop at Liverpool.

Salibaba and the Forty Thieves
Reply to  Ordnance Dave

Yep I vividly remember people labelling those two Pep Fraudiola and Jurgen Flopp respectively. As expected Those two were given time unlike Van Gaal.

I am also interested in seeing our progression this season, I’m sure it’s only a matter of time before the drills become second nature to the players.

I would also add that this is still only Arteta’s first job as manager.

I know Cedric was getting some stick after the game, but I thought he was one of the few trying progressive passing plays in the first half. So I guess it’s good to see here that he wasn’t actually bad before (the undoubtedly better) Bellerin came on. Gabriel’s influence likewise has just felt like it’s been growing and growing as the season’s progressed–there’s a certain confidence to his play that is so welcome to see so early in his career at such a young age for a defender. These visuals do a great job of highlighting that. So interesting and… Read more »

A Different George
Reply to  Timorous Me

I said this in another post: Cedric is not bad at all, in fact pretty good. Bellerin is clearly much better. The conclusion is that Bellerin is now living up to what many of us thought before his injury: a world-class right fullback (wingback, I don’t care), a crucial part of the Arsenal team for the next half-dozen years, and (maybe) a future captain.

Thanks for the breakdown Dom, the visuals are very easy to read. It seems that despite his combative and physical attributes, Gabriel is in essence a ball-playing CB.

I noticed that according to the passing graphic, Leno attempted a pass from the centre-circle, that’s wild😂. Did this really happen?

Just watching the slick football that Leeds played tonight I yearn for just a glimpse of that from our boys.But other than a brief period against a poor Fulham side not much to write home about going forward which is so disappointing considering how we have improved defensively.Gabriel and Partey top signings by the way.

Marco, that pretty much sums up how I feel right now too. Bit boring watching Arsenal play right now but you can see the new signings are an improvement and I am sure the team will spark into life.

I think this time next year we will see a squad that Arteta has “made his own” and is happy with. Hopefully we can get by and push for a CL spot this year though. Signs are promising.

Biesla has been with Leeds for a number of seasons now. That’s “his” team.

Nice visuals but as wih stats it can be skewered to show certain narratives or misinform otherwise with other select stats left out.

Particularly what consitutues as Possession Value is vague and open to interpretation. Volume of numbers alone also do not tell entirety. A player may have less touches on the ball but may effect play more.

Huge pinch of salt. Depends who is viewing it and what they want to select you to see.

This is partly right, of course. You know, like Lewandowski did nothing most of the time except when he scored the three goals. But if a player is accused of making only square or back passes, these sort of statistics help determine if that is true. So, stats *and* watch the game.

Is that that cunt Arnautovic in the background? Is that where he is now? What a cunt that bloke is!

That is not Arnautovic, it is left back Max Ullmann. Arnautovic plays in China for Shanghai.

Max Ullmann has my sympathies for resembling Arnautovic. Poor bloke.