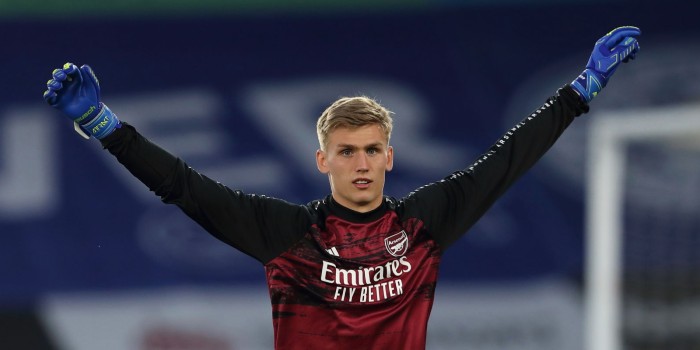 Alex Runarsson says he’s inspired by Emi Martinez’s Arsenal story and intends to “work his arse off” in the hope of getting as much game time as possible.

In a recent interview with the Independent, Martinez, who signed for Aston Villa last month for £20 million after a decade as a Gunner, reflected on the day-to-day difficulties of staying motivated when, as a back-up keeper, you spend so much time in the shadows.

Ultimately, the Argentine got his reward; not just a big-money move but also the adoration of Arsenal fans following a stellar run in the first team that ended with silverware.

It’s a tale that has resonated with his replacement.

“I read an interview with him [Martinez] a couple of days ago and he said he came in as the ninth-choice goalkeeper, but he worked his arse off to become the first-choice at Arsenal after Leno’s injury,” Runarsson told Goal.com.

“Then, he makes a brilliant move to Aston Villa for £20m. That should inspire everyone, not just me. That’s my plan: to work my arse off, enjoy every minute of it and get as many games as possible.”

Runarsson arrives at Arsenal with the backing of keeper coach Inaki Cana. The Spaniard recommended the 25-year-old to Mikel Arteta and Edu having been impressed when the duo worked together at Danish side Nordsjaelland.

Since initial contact was made, it sounds like it’s been a bit of whirlwind for the Icelander.

“I spoke to everybody: Edu, Mikel and Inaki. They didn’t have to convince me too much but I wanted to hear what their plan was for me because I am at a prime age as a footballer,” he added.

“That was important to me that they were thinking the same way I was. It was amazing, the first call I got, I couldn’t believe it was really happening. Now, I am starting to get used to the idea that I am playing for such an amazing club.

“Everything happened fast. I did the medical and got on the train to Arsenal to finish the small details, sign and settle in. When you go into a big club then you need to settle as quickly as possible as they can’t afford any errors.”

“I know it is going to be hard but I will work for it for every minute and do what’s necessary to get as many games as possible. I think the only person I can rely on for this is myself, so I know that and I will try to do it.”

Arteta looking for goalkeeper solution, ‘probably in this window’

Anything to say about Wenger?

Nothing – but if he ever did, possibly something along the lines of “He’s the past, I’m the future”? Who knows?

Let’s hope the lad has more class and respect than that.

I think a public apology will be a good start to his career at Arsenal.

The context is of course very important. His passion may have something to do with his comments, because these comments were after the 8-2 defeat against ManU

Maybe a personal apology to @Naked Cygan might suffice.

Dude was like 16 and salty after the 8-2 defeat to Man UTD. Don’t act like you’ve never been pissed at Wenger.

I have been pissed at Wenger many times, but I am still waiting to sign my professional contract with Arsenal. Would you hire a 16 year old who cursed you out publicly?

Is Arsene still Manager then ?

Apologies to all the 16 year olds I’ve offended – you know what I’m trying to say.

Nobody cares about what I say, because I don’t play for Arsenal. This guy is playing for Arsenal, can you see the difference? and you are telling me if a 16 year old football player calls Arteta a spanish f*ck, and stupid, you will be OK with it in 10 years? What if he called someone an English f*ck* and stupid? Still OK? Sign him up? I guess u liked it when Xhaka, club capitan told you to go off too? Lol

I for one would absolutely be ok with it. He didn’t murder, rape.or assault someone. He called someone some childish names in the heat of the moment after a bad result. When he was 16. There is nothing for anyone who possesses any common sense at all to get worked up about.

Lol guy, you gotta move on man. He was a kid caught up in the idiocy that is social media, and started venting and posting random crap online. A lot of other, older people didn’t/don’t know better, so it is what it is.

A decade had passed and he was literally a child when he cursed out AW (who is no longer our manager). So yeh, I would, if he’s good enough

Var Will Solve The Problem
Reply to  Jeremy DG

I don’t care if he doesnt apologize if he backs it up with 100s of match winning performance. But the fact is his twits are already out there. Everyone knows about it. It will only show signs of maturity if he was to own up those texts 10 years later and apologized. We were all frustrated at that defeat but AW is an icon of not only Arsenal but also the world football. Is it too much of an ask for someone to own upto the mistakes that he made at 16? It’s not like AW is going to sue… Read more »

I’m trying to imagine being called out to justify things I’ve said and done as a teenager. I’m glad I’m old enough not to have every dumb thing I’ve ever said or done when still growing up being traceable on social media. In that respect I feel for today’s youth.

In this case, yes.

His anger was out of the frustration of losing 8-2 in a shambolic match. I probably said worse things that day.

What I like is that he WANTS to be gunner and he is a gooner, like Partey. I like players that get it and will fight for the badge. Can’t exactly say the same thing about other recruitment targets.

That’s what you want to hear from a backup. Commitment and determination. Fair play, but actions speak louder than words, so we’ll see how he fares when he gets the chance.

Positive sounds which is good to hear from the player. Still, Arsenal are taking quite a big risk making him first choice back up, but maybe feel they can fall back on Macey if necessary.

He put the son in arson, he has what it takes to run his arss off and become a lit?goalie.

Take it easy, Bro. We still need your buttocks for balance to make those awesome saves when needed.