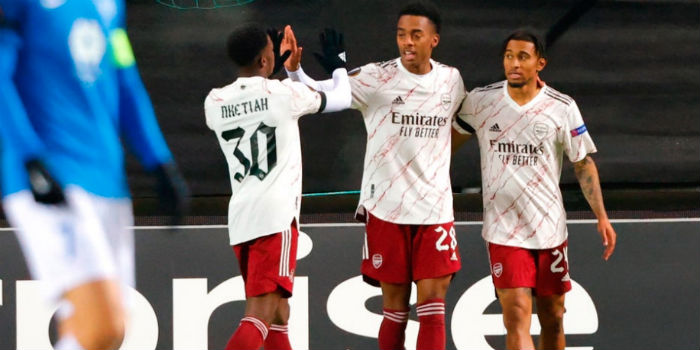 Mikel Arteta says Reiss Nelson’s willingness to learn and his performances in training have led to things clicking for the winger in recent weeks.

A bright spark against Molde at the Emirates three weeks ago, the England under-21 international capped another impressive showing against the Norwegians with his first goal of the season as Arsenal won 3-0 to secure a place in the Europa League knockout stages.

Arguably the best player in his year group when he came through the club’s Academy, the winger was tipped to make a big impact on the Gunners first team when he returned from a loan spell at Bundesliga side Hoffenheim.

For various reasons, including untimely injuries, it didn’t really happen for him under Unai Emery but Arteta believes progress, thanks to hard work, is now being made.

“He’s made some big steps in the last month or so,” said Arteta when asked what Nelson needs to do to get a run in the side.

“He’s shown what he can do. Again, he’s another player that wants to take you on all the time, he’s very vertical, he’s a great player when he runs in behind and he’s very unpredictable.

“I really like these types of players to play in the wide positions. Defensively, there are things that he needs to do better and he will improve in that but he’s a much more mature player.

“He showed a great attitude, in my opinion, to say that he didn’t want to leave on loan because he belives that he’s got a chance to play for this football club. He’s showing that he wants to take that direction. He’s performing in the right way.”

Arteta went on to add: “We’re doing a lot of work with him, obviously. He’s so willing. He’s asking for more all the time. He wants individual meetings.

“He wants to work on the pitch in certain aspects in which we think he can improve. He’s training really really well, he’s developing as well. He had a click and we needed that click. Now it’s up to him but I must say that his last performances have been really good.”

He and Pepe can push each other to much higher levels.

Let’s hope he has a great career and gets a column outside the ground to celebrate it.

Tribe
Reply to  The Kolkata Gooner

With Saka, Nelson, Pepe and Niles (and also Martinelli coming back), Willian should not be anywhere near. Maybe collecting balls behind the training goals.

The Arsenal
Reply to  Tribe

just the words W i l l i a n instantly trigger me now.

Since the Fulham game, it’s like Willian has swapped roles with his twin. His twin who isn’t a footballer, is clueless, and is on a three year £5667766 a week contract.

B jack
Reply to  Kentish Gooner

Willian has an evil twin….. Damn now it all makes sense now

Khandaker
Reply to  The Kolkata Gooner

I agree with you

Daveo
Reply to  The Kolkata Gooner

I’d start you, Kolkata Gooner, over Willian on Sunday.

The Kolkata Gooner
Reply to  Daveo

I’d start myself over Willian and I’m not even a winger.

basically, his attitude is the fucking opposite of willians and he’s never played for chelsea so… lets play him

When everyone is fit we should try this team. I think Saka can cause havoc behind Auba going making runs right and left, switching with Nelson and Pepe.

Saka is sooooo good on the left, I don’t know you want to move him in the middle? He is superb defensively, he’s a natural at beating his man from that side, is probably our best crosser of the football along with Tierney, and he has an excellent understanding with Tierney. If we’re going to play a central or floating attacking midfielder, let’s give those players better suited to the role (Willock, ESR, Willian, etc.) a chance to own it.

Nelson should be playing instead of Willian…..

Same comment I made with Pepe, it helps to have Laca hold and control the ball, command some presence in the middle for the wide players to play off of. Nelson is hungry and should get more feature. He needs a bit of time to develop but frankly with Auba and Saka as options out left, I saw him as the one to push Pepe. We did not really need to add Willian. We could have instead saved the money on Willian’s 3 year outlay on salary and not mucked around with Lyon, got Aouar in. Aouar would have added… Read more »

“He wants to work on the pitch in certain aspects in which we think he can improve…”
Sounds like Arteta is beating the spontaneity out of him.

How do you get that from what he said? That’s some serious mental gymnastics to come to a negative conclusion from what was a positive statement about his player.

Arteta has been lauded for his impact in refining Sterling and Sane, in particular, in order to get more end product from them. I trust him to have a good impact on Reiss and, if he can add goals/assists to his already clear techinical ability, then he will be huge for us.

Yes, for a 19 year old prospect. And plus he’s from the academy so would cost nothing if able to make the step up to first team.

It’s a win if we’re able to keep him.

why does he and pepe never look happy? even when they score..

I like Nelson – his stats in the Bundesliga were actually pretty decent if I remember rightly. Why we signed Willian I’ll never understand… Half of the decisions this club has made over the past few years have been so, so positive – the recruitment of Gabriel, Partey – the emergence of the youth players. But the other half… Well, they’re plain confusing: what was the thinking behind Saliba? Cedric? Mari? Pepe? And that’s without mentioning he who should not be named. Thoughts?

Who is “whoshallnotbenamed”? Because there are a lot of those.

Pepe is not a bad player per say even on 72m at that time. The guy a wicked left foot, play him closer to the opposition goal post and he will cost havoc with his assists and goals, and remove most defensive duties from him.