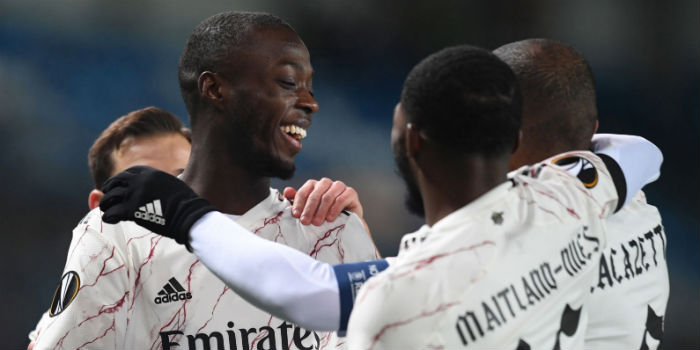 Mikel Arteta says he was impressed by the way Nicolas Pepe responded to Sunday’s red card as the Ivorian delivered a fine goal-scoring performance to help Arsenal to a 3-0 win against Molde in Norway.

A constant threat in the first half, the 25-year-old went on to hit the bar just after the break before finally breaking the deadlock on 50 minutes with another left foot curler.

Having been the target of his manager’s ire after Sunday’s draw with Leeds, this was a great way to start repairing the damage.

“I am really pleased,” said Arteta. “After the disappointment of something negative, you want to see a reaction and I could see from the first minute with his body language that he was ready to act.

“I think he had a great performance, he scored one goal and could have scored another one or two. He created some good moments in the game and worked really hard for the team, so I really like it, I am pleased with that.”

He added: “We all know what his level is, and all the time the question is how often he can get to that level and how he contributes to other aspects of the game.

“Today is the example of the level he needs to hit, and he needs to keep doing it because he is capable of it and you can see that every time he gets in those positions win the final third, he is a real threat and a very difficult player to control because he can go with his feet, he can come inside, he can shoot, he can create crosses and he can go in behind you as well. That is what we can expect from him.”

Banned for three games in the Premier League, Pepe will have to make do with further game time in the Europa League in the coming weeks. Here’s hoping he can pick up where he left off when Rapid Vienna visit the Emirates next Thursday.

It is a little bit scary what some players have to do. “Today is the example of the level he needs to hit,”, we have a lot of players playing all the time, performing far from what Pepe did today. I just hope Pepe will keep on working, with these performances there is absolutely no discussion if he should play or not.

Couldn’t agree more. Consistency is lovely but right now if he does that once every three games, it would be worth it. If you want more – set the team up to facilitate it!

Viv the 🐐
Reply to  Alex

I think also the benching maybe wasn’t enough of a kick in the ass. Probably the red card and the aftermath told him like: We have to take this serious. Hopefully he won’t become complacent again. But with so much competition, that would be really deadly.
Up The Arsenal!

Reality check
Reply to  Viv the 🐐

Could be the 4231 and the aupport from midfield too. Pepe released Willock for the second and combined well with midfielders today

Massively true. We look utterly different with midfielders running forward into the play.

Other than the goal, what did he do well?

His passing was poor (when he did pass, which wasn’t often enough) and he was tackled so easily because of how predictable he is.

Absolutely. 8 successful dribbles, 4 key passes, 6 shots on goal, with 2 on target (led the team in all those categories). What was he doing all game?!? FFS.

In hindsight, thank God Pepe was shown the red card the other day.

…what? how? think that 30minutes pause gave him a boost ? or the redemption thing?

Maybe it’s that sometimes a crisis can force a resolution, the head butting incident is a sign of a frustrated player, a few good performances against easier opposition may help redirect any lingering frustration into a hunger to play well. Having to go through three managers and COVID19 would disrupt any settling in period. You can’t settle on shaky ground, some players adapt faster than others, but speed in adaptation isn’t a bar on ability, some of our best took a while to settle, Pires most famously, Hleb took forever, but eventually became good enough to be signed by Barcelona.… Read more »

Yes, he played well no doubt about that. However, he needs to replicate his form in the Europa League in the much stronger Premier League where, let’s face it, it really matters. We don’t play many Moldes there unfortunately or we’d be certainly be higher up than we are. It’s making that transition that’s key for Pepe. Hopefully, he can build on the performance today.

Europa league matters because it’s a path to CL football next season.
Don’t make it sound like a friendly.
Let’s face it, our chances of making top 4 in the league this season is as easy as Trump’s path to victory through the courts.

Maybe we could just tell the world we are playing in the Champions league next year because the EPL was rigged and refuse to budge, maybe even turn up in place of the 4th placed team and run out on the pitch before them. And of course continually tweet about it IN CAPITAL LETTERS.

I feel like sometimes he overcomplicates things when in reality he could just beat his man and go rather then try beat him for the second time, Sterling was abit like this hopefully arteta has a similar influence

Agree with that, another slightly annoying habit he has is checking inside when there’s plenty of green space ahead of him to push into, especially frustrating when we’re on the counter.

And that’s because somebody needs to remind him that he has a right foot!
On a couple of occasions he had the chance of making a simple right-footed cross to create a chance for goal. But no; he would rather try to cut in to the left and, invariable, lost the chances.

He cuts inside when he’s playing on his weaker side , when he’s on the left his stronger side he gets to the by-line and crosses.

With his comments since the red card, and his performance today, he’s made himself accountable.

I thought he was playing well last game before the red mist and matching card.

I think he’s getting there, surely his sweet spot is to get it onto that magic wand of a left peg.

Part of the problem as well is he needs to develop an intuitive understanding up top with whoever plays in the middle.

With Laca, you get more lay offs and he controls the ball/asserts his presence better in the penalty area and around it.

That helps players like Pepe to play off of him.

Something of course that won’t be mentioned.

I think we would love Pepe more if the team was doing well.. i like his maverick random style. Football has gone away from his type of player, which is why Ozil and the conventional 10 is extinct. The high pressing high energy athletic systems has led to almost robotic players. Guys like Okocho and Ronaldinho would be seen as liabilities by certain managers.

He is so predictable. He got dispossessed way to easy and was reluctant to pass when players were in better positions than he

The goal doesn’t make him a good player. He is not.

I think yer on the wrong site.

Great avie name, btw. But this anti pepe screed you lay down is patently silly. Noone is buying it. So ease off there, champ.

Says the sp*rs troll who keeps dishing out negative comments

“and how he contributes to other aspects of the game…”
Another one for Arteta’s ‘kill spontaneity’ factory.
Low block, small margin, risk averse, crap football.
Sorry I can’t understand how we’re not leaning into our strengths as an attacking team. Manager is a control freak.

It’s on Arteta to sort out his midfield out. My brother hit the nail on the head, watching the senior team is like watching Ireland play football. Until he sorts his midfield out all our forwards will be blowing hot and cold. I hope partey gives him the opportunity to take a gamble with an ESR, Willock, Martenelli in a central midfield coz something needs to change and quickly. The way the league is going I think he has till January coz a good run in the new year will get us top 4

I have enjoyed the Pepe’s goal very much