Arsenal 0-1 Burnley: By The Visuals

Arsenal’s terrible start to the 2020/21 Premier League campaign continued with an abject 1-0 defeat against a Burnley team that had only won 1 game in their first 10 Premier League games. It continues a worrying end to 2020 for Mikel Arteta, who looked like a managerial marvel when Arsenal triumphed in the FA Cup, but looks much more like a rookie manager in a tough job now.

Another red card (Arsenal’s 7th in the league under Arteta) sentenced Arsenal to another disappointing result and Granit Xhaka’s dismissal massively affected Arsenal’s chances of winning the game, which were looking quite promising before the Swiss captain decided to grab the neck of someone who was actually doing him a favour by splitting up a fight.

Let’s delve into the data to see if we can gain more insight. 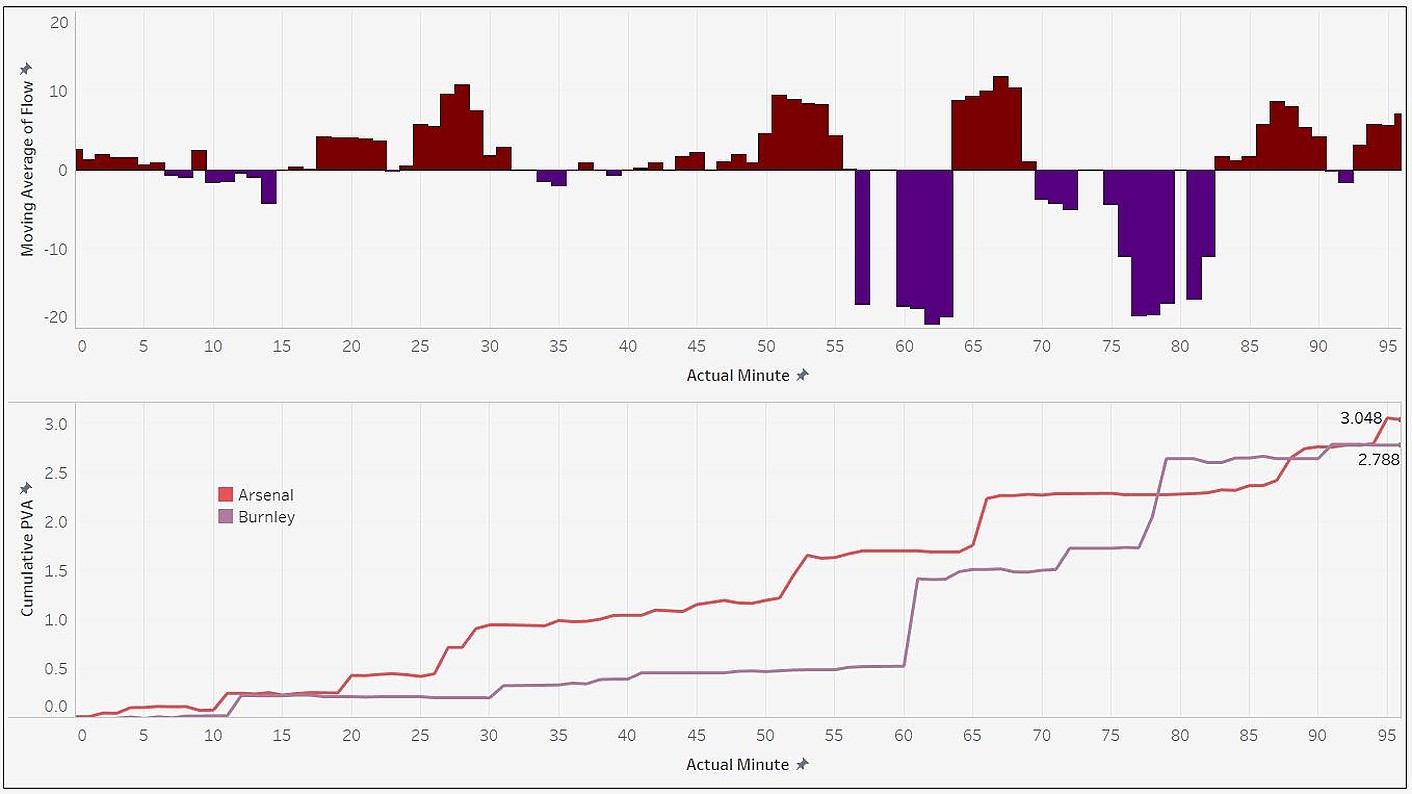 As we can see from above, Arsenal largely dominated the game until Xhaka got sent off (58th minute) with Arsenal having a Possession Value of above 1.5 and Burnley having a PV of below 0.5. Xhaka’s red card completely flipped the script. Arsenal really should have scored, with Alex Lacazette in particular fluffing his lines after great work from Kieran Tierney down the left. On another day, Arsenal win that game quite comfortably and Granit Xhaka decides to refrain from attempted assault, but Arsenal seem to be running out of luck as quickly as we’re running out of creativity. 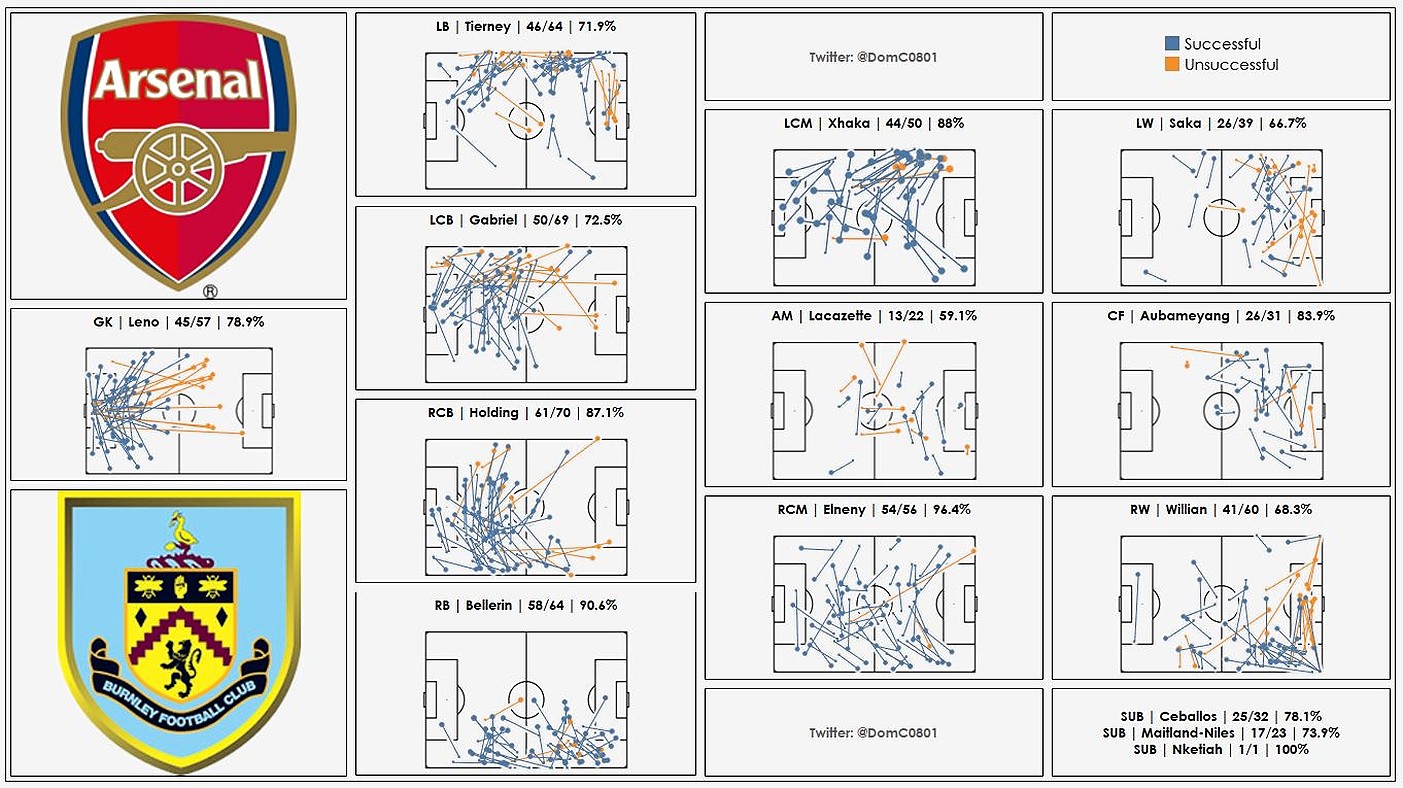 The above shows the pass maps for each of Arsenal’s starting XI. Arsenal again looked to focus possession down the flanks, with the centre of the pitch again being left quite empty. Arsenal’s full-backs and wingers again looked to pepper crosses into the box with a little more success than in previous weeks as shown below. 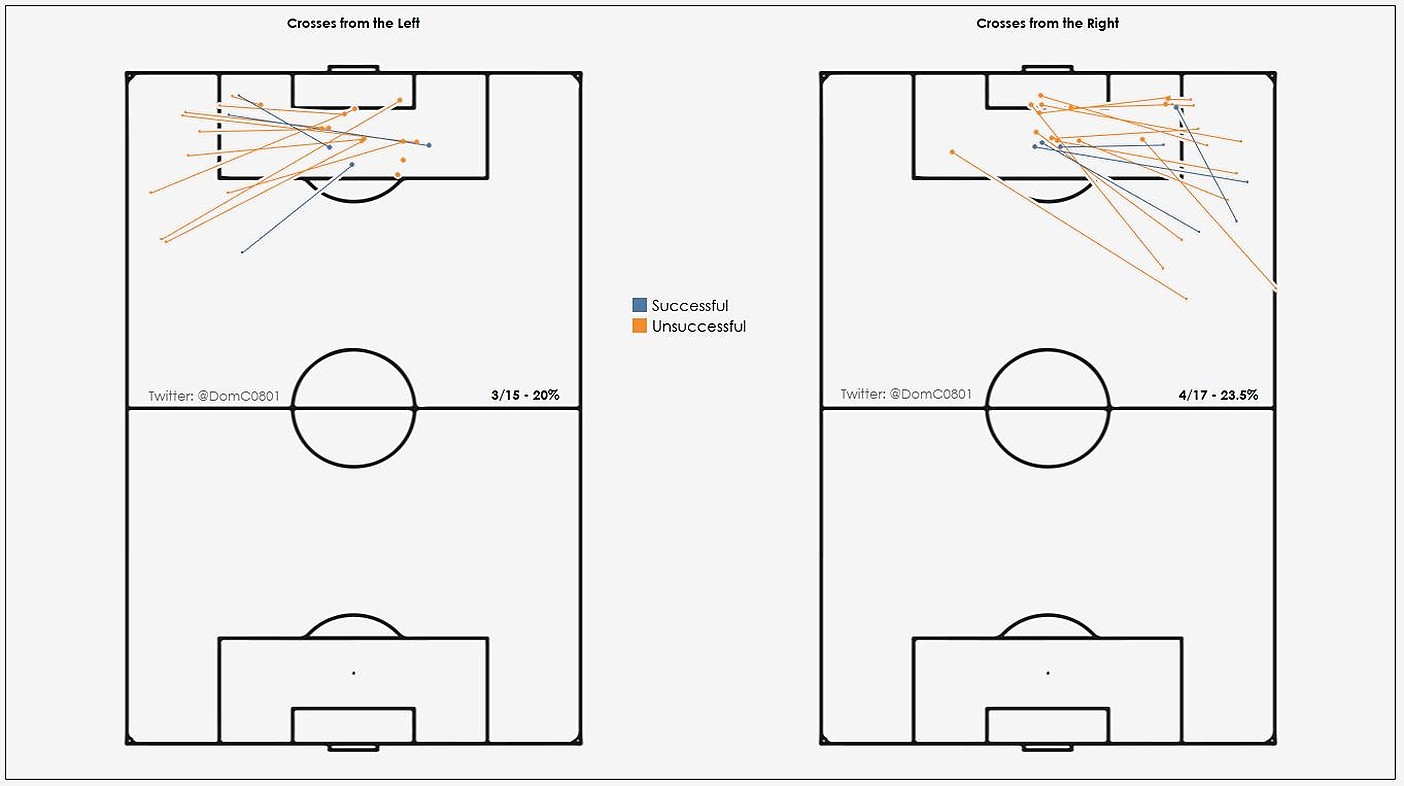 Arsenal’s crossing may have been a little bit better but the quality of opposition has to be taken into account, and at the end of the day, Arsenal still did not score, with the Gunners currently on course to score 32 goals in the Premier League this season. 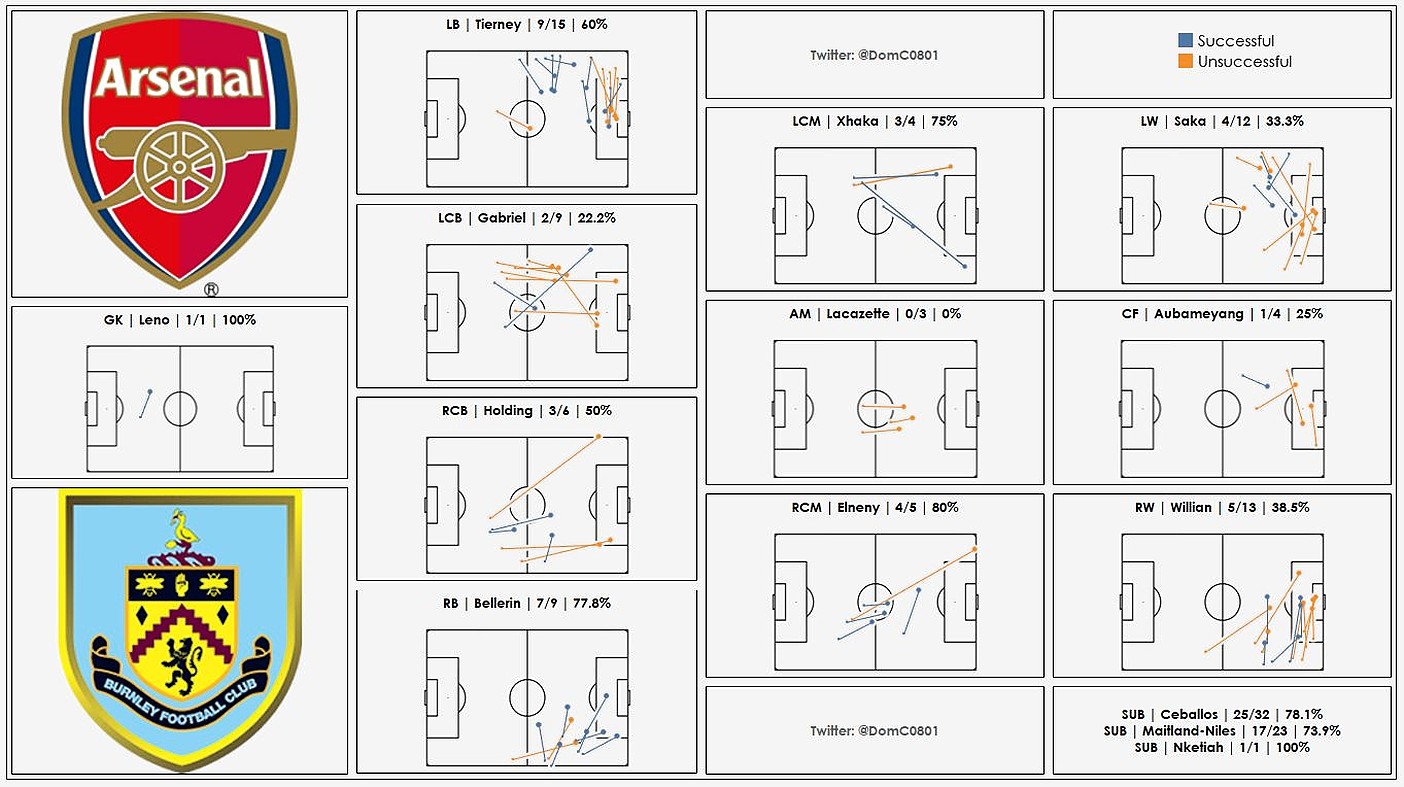 Above are the progressive (Passes that result in the ball being at least 10 metres closer to the opposition goal) passes attempted by each player. Arsenal’s midfield did very little to progress the ball, with Xhaka, Lacazette and Elneny combining for less progressive passes than Kieran Tierney and the same as Hector Bellerin. Alex Lacazette in particular struggled, as the experiment of playing him at Number 10 continues to stutter. 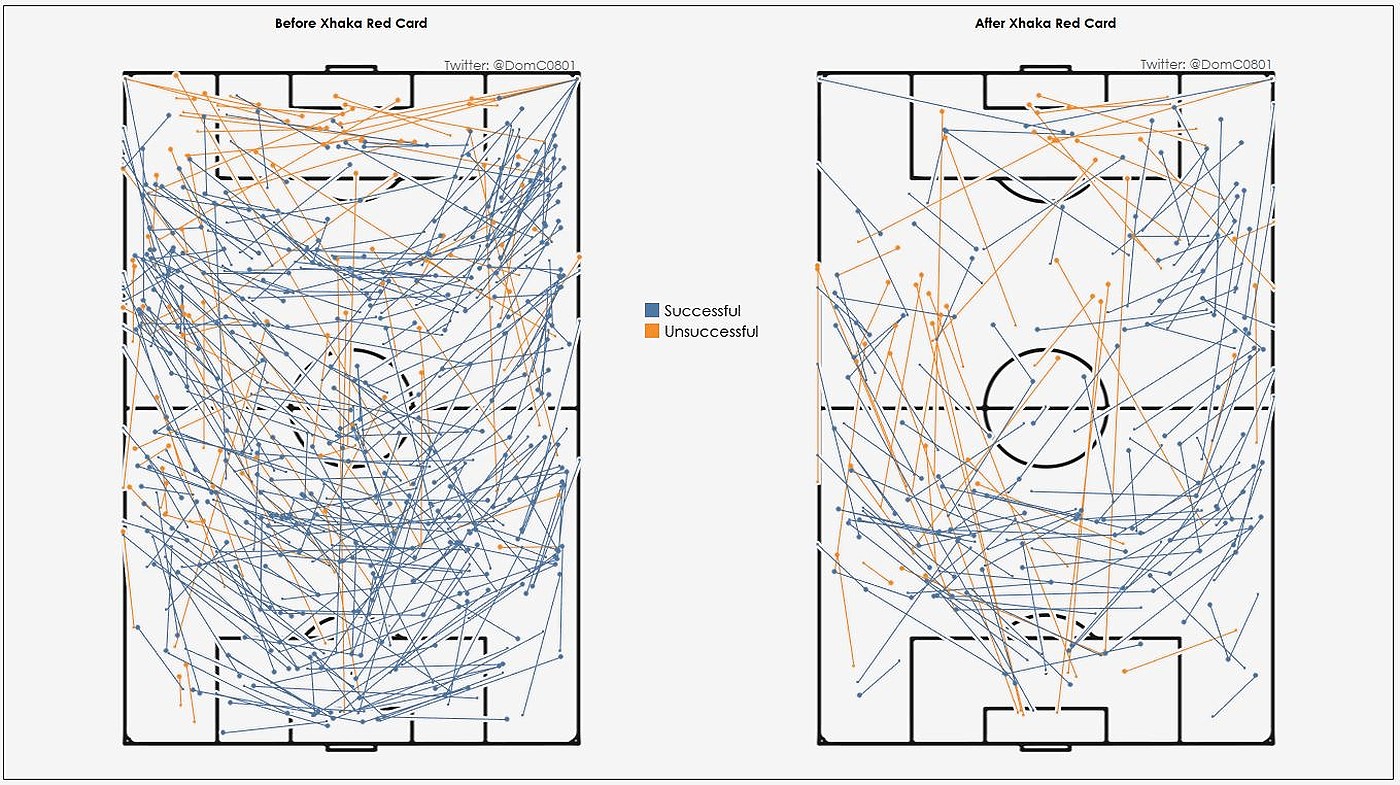 To emphasis the damage Xhaka’s red card did to Arsenal’s chances of winning, look at the above image. Arsenal were dominating proceedings, with the Gunners firmly planted in the final 3rd, but after Xhaka was dismissed Arsenal just could not sustain any pressure, as Burnley came out of their shell to take advantage of Arsenal’s player deficit.

So another poor performance from Arsenal who face Southampton, Everton and Chelsea in the next 2 weeks. This next few weeks will truly be the biggest test of Mikel Arteta’s managerial career as he has received the ‘dreaded vote of confidence’.

Previous articleArteta: It’s a big test for the whole club not just the players
Next articleAuba: Pepe can make a difference on his return

I just thought about Martinelli. That’s boy would have pushed even Auba to the bench by now. We are unlucky.

Not under Arteta’s watch

Wow, Martinelli is getting so good while he’s injured.

It’s beyond doubt now that the master plan is to whip crosses in to the strikers. Just in case anyone had any doubts. Whether that is out of necessity because our most creative central player has been ostracised or it is the deliberate choice of how Arteta wants this team to plan who knows. One thing is certain is that he isn’t playing to the strengths of one of the most prolific forwards in the world.

Having watched Citeh and Chelski also fail to feed world class forwards, I wonder if the wing, cut in, cut back model is now too easy to defend against.

High crosses to our forwards is doomed to fail, apart from set pieces with CBs pushed up.

Spuds are top because they approach the game like a bottom team but can break incisively and have players who attack opponents and space.

Not that we should replicate what they’re doing but the only players we have that can help us break with any speed that play centrally at the moment are AMN or Willock who would likely be better coming from deep. Whether people think they’re good enough is another thing. The manager certainly doesn’t think so but then again he doesn’t seem to have an interest in attacking via the centre at all. The only guy we have to unlock a defence isn’t in the squad and ESR is the next best in line in my view. At this stage I… Read more »

Was watching Man City play against West Brom and it was the same winger dominant creativity. Really not efficient and so boring.

At least Cedric is a better ‘whipped-crosser’ than Bellerin, bodes well for tonight.

The opposition team works hard to get into an ultra tight low block, but that is not helped by players like ceballos and Xhaka collecting the ball off our centre backs.

It was Xhaka’ MO to drop back into the left back spot and dictate a game from there. But when you have someone who can spray passes like Gabriel there it just slows the game down.

No open play goals in 8 PL games (Gabriel was follow on from a corner) must surely confirm that the system employed isn’t working. Midfield needs to provide more options in and around the box, shooting can bring results – deflections saw WBA win last night.

No 10’s aren’t the way forward in football unless you have an elite player there. We don’t. 433 is a better alternative but with actual attacking midfielders left and right. Leno AMN Chambers Gabriel Tierney Willock Elneny Saka Pepe Auba ESR Saka and ESR can swap positions as the LCM and LW throughout the game. Willock has been our best player most EL games in the RCM position so we should play him there. His link up with Pepe has been good by providing the decoy run into the box. This gives space for Pepe to cut inside on the… Read more »

“No 10’s aren’t the way forward in football unless you have an elite player there. We don’t.” Yes, you do.

Sadly, that should be “had”.

Think we need to go back to 343 at least until Party is back Leno, RCB Chambers/Saliba, CB Mari, LCB Gabriel,RM M.Niles,Willock,Elneny,LM Tierney, RF Pepe,LF Saka, ST Auba Subs: Nelson, ceballos, Balogun, Smith Rowe, Eddie, Runarsson, Holding Laca needs an extended break let him go away with his family get his head straight. He is so low on confidence I would drop Luiz, Xhaka, Bellerin, Mustafi for good. I would literally tell them you don’t need to turn up to training ground again find yourself a new club. I don’t blame them for the leaks or bad atmosphere around the… Read more »

Only at Arsenal does this kind of amateur failure persist so long. Bayern fired Kovac in November ‘19 (!) after winning the double with him the prior year. Dortmund just fired Favre. Both of them had much longer and stronger track records than Arteta *who has proven nothing.* However, we are amateurs who got their jobs from connections rather than merit from bottom to top: Arteta – jumped the queue as an unproven coach Edu – former player who is qualified as TD how? Per – former captain who moved straight into his role because reasons? Vinai – ok, he… Read more »