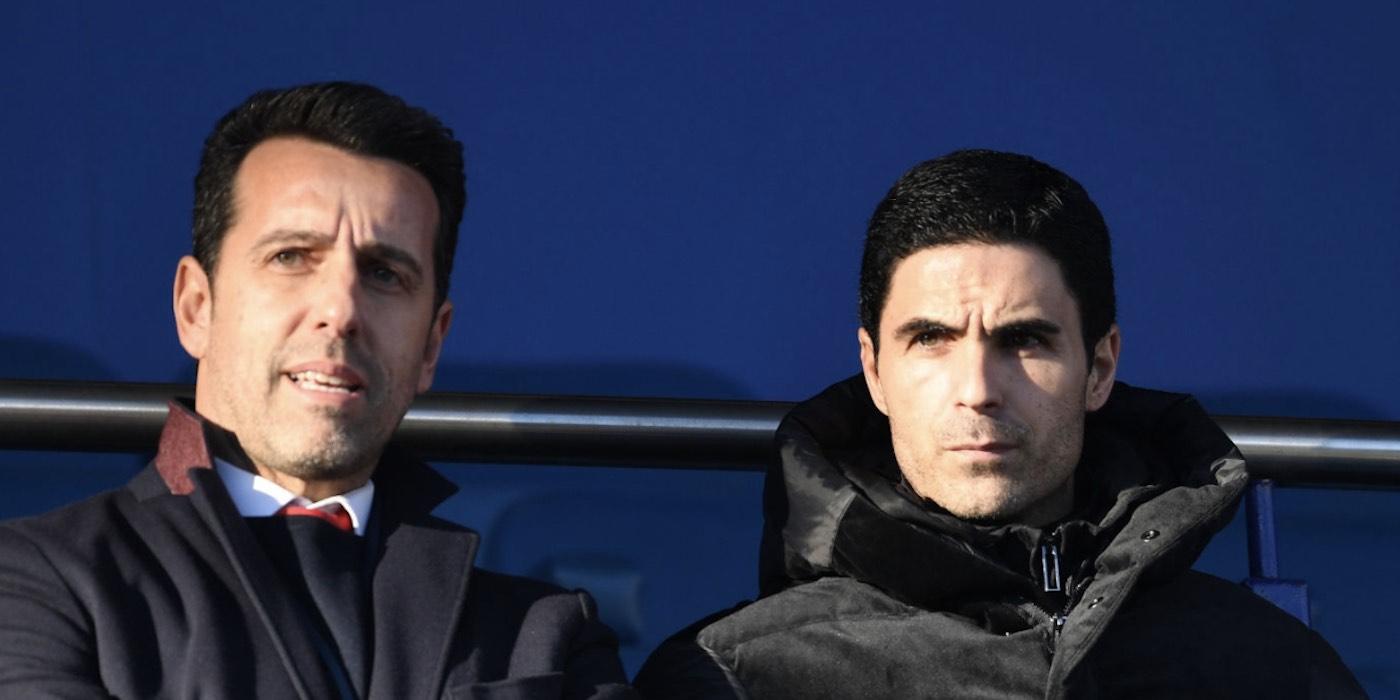 Mikel Arteta says he’s been talking with Technical Director Edu about the January transfer window, and while he appears keen to add to his squad, he was uncertain about what the club could do in the market.

The Gunners have been linked with creative midfielders like Christian Eriksen, Salzburg’s Dominik Szoboszlai, and summer target Houssem Aouar, but the Covid-impacted finances and the need to shift players to free up money from the wage bill and make space in an already bloated squad make next month somewhat uncertain.

Speaking ahead of the Europa League clash with Rapid Vienna, the Arsenal boss was asked about potential deals next month, and said, “We are planning. We’ve been talking with Edu and the club about things we can do in January.

“At the moment it’s pretty difficult and unpredictable. As well in terms of places [available in the squad], we are very restricted at the moment.

“We’ll see what happens. Things will move in the market and we’ll be prepared to do something knowing the limitations of that market in January and the limitations we have as well to sign players.”

It’s clear that Arteta wants transfer market activity, telling DAZN this week that he feels he’s short of the players he needs to play the system he wants.

Some of that may come from internal solutions, with a crop of exciting young players on the cusp of the first team, but a significant part has to come via transfers. Having been backed this summer by the ownership to bring in Thomas Partey, it remains to be seen if KSE will free up funds in January.

Things are also complicated by Brexit, with new rules for player recruitment due to the loss of free movement between the UK and EU countries.

And after a third successive home defeat, the Spaniard was sanguine about what it’s going to take get things back on track.

“Even when we were winning we are still a long, way away from what I want,” he said.

“When losing you obviously see things even further. Again, the margins from where we were losing or winning sometimes they’ve been really, really small but there are reasons for it.

I know its not quite the finishing problem, as we have Auba in the team. However Giroud is rubbing salt in the wound by scoring 4 on the night!

Hope we can address the creation problem in this window, its going to be tough no doubt.

Edu and Arteta are going to have to be creative – sorry, I’ll leave now.

Not going to lie but I’d rather have Giroud than Laca and maybe even Auba. He’s such a team player

Giroud is rare talent and an underrated player. Maybe French coach realized his potential and that is why he leads their line than any other superstar French team has. Certainly he is better than Laca and has a fantastic professional attitude..

Meanwhile…
Giroud scores 4 fuc***g golas in freaking Champions league!!
And we…we are miles away from CL and our strikers havent scored for ages.
So sad…

There must be more over the hill players at Chelski we can pay over the top wages to? Our wage structure over the last few years has really caused us the problems we now face.

So many players we can’t unload because no other team can afford them and no incentive for them to move on. No money left in kitty to attract new players.

Yes, the wage structure is mainly down to Wenger, I fear. Many, of the “problem” players we (still) cannot offload are on the OTT wages that were agreed under his tenure.

Sorry but I don’t agree and you’re talking out of your arse n . Wenger had to pay the wages or risk losing the player, look at all the great players we list when Wenger was trying to keep the wages lower than the likes of man City Chelsea, Man United even foreign clubs like Barca . We lost Cole , Petit , Nasri, Adybyour, Veiara, Van Persie, Overmars, Clichi, Sanya, Toure, Hleb and many others. And then look at all the other players we didn’t sign who signed for other teams offering more money . I’m absolutely sick of… Read more »

That’s the spirit. We can get Giroud back after three years

Giroud is the kind of option we need upfront for Plan B. All of these crosses and nobody is heading the ball. 4 goals!? In the CL!?

I think a 4-3-3 is a good formation but the personnel required may be too large an investment for January.

I’m not sure I want to trust Mikel with getting more players. We should already be doing better with the ones we have.

The squad has limited capability they can improve but not a lot. I am with Arteta and he should have more time to address and fix. We should also be cognizant of the fact that there is a pandemic out there and hence his task became much more difficult. I believe we should be calm and understanding at this time.

I said it before he got the head coach job and I say it now he’s the Manager—- THE JOBS TOO BIG FOR HIM !! It really needed an experienced coach , its a massive job. If not an experienced coach then he needed experienced top coaches around him, has anyone ever heard of our backroom staff? Our no 2 worked as David Moyes assistant at Everton and wasn’t even taken to Man United when Moyes went there he got a top class coach as no2. To make our players better than average we needed top coaches not average ones.… Read more »

Such short memories…I remember when people couldn’t wait to get rid of Giroud. Suddenly he’s exactly what we need….How the worm turns…

FMT
Reply to  Old but Gold

I was disappointed when Wenger let him go. Infact, I was sad. I thot he loved the club and the fans, and he was dedicated.

It’s the youth production line which has proved most valuable for us. The experienced buys haven’t always turned out. The brexit will make it less achievable to bring in players like Anelka and Cesc as we will be competing against other clubs after they are established so we won’t be making millions again. It is just down to being efficient in buying AND selling at the right time in the players careers for our budget. Something we had become very good at under Dein/Wenger but was very mixed under Gaz/Wenger and totally collapsed under Raul/Don Raul/Emery. We need some creative… Read more »

Wonder if Arteta would rue not selling AMN when he had the opportunity. That’s another player that has gone down on value because he hasn’t been played much. Arteta’s comments on our midfield players not being up to mark makes it even less possible to offload them. We couldn’t find suitors for Lucas and Matteo, both viable candidates, but bcoz the market knew our problems with them. It’s good to be open but not at the cost of one’s own good – a bit like cutting your nose to spite your face. To me, feels like he is sounding more… Read more »

Whoever he signs, we need players that are not shot shy.

The first thing you hear is the sound of breaking glass, multiple windows crashing in at the same time. No knock at the door. No polite announcement. Just the gut wrenching sound of all your windows being smashed at the same time. Then comes the smell, it hits your nose just a fraction of a second before you notice the canisters rolling around the floor. Smoke bombs! Shit you say, as the room fills with smoke and you fall to the floor to try and breath. New Signings! Fresh meat! Jack Wilshire! Another ex-Spurs player! Everyone in a buzz, fans… Read more »