Southampton 1-3 Arsenal: By The Visuals

Arsenal made it 5 wins from their last 6 Premier League games (5W 1D 0L) as they overcame an early deficit to beat Southampton 3-1 at St. Mary’s. It proved to be a good ‘revenge’ win for Arsenal after the Saints knocked them out of the FA Cup a few days earlier and it continues a very good run of form for the Gunners in 2021 so far.

Let’s delve into the data to see if we can learn any more. 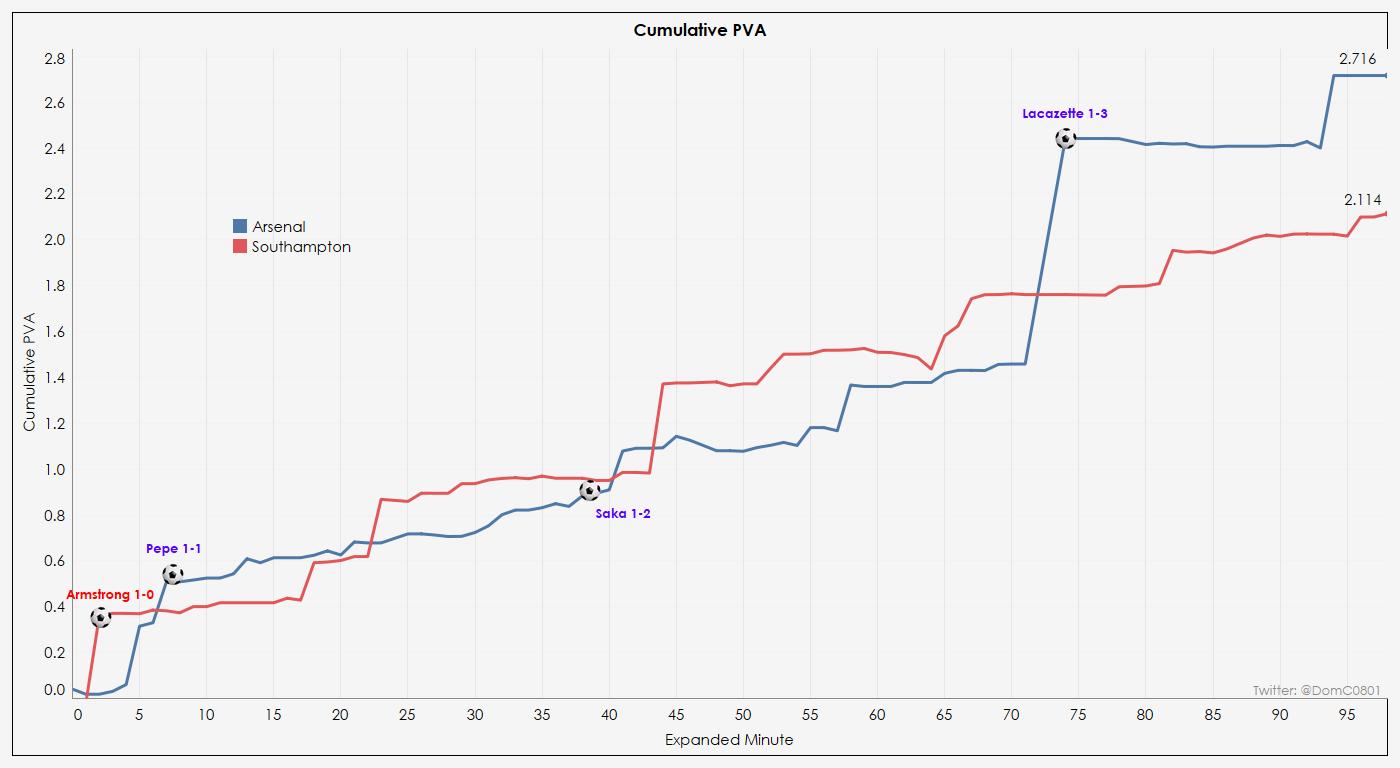 Above are the Cumulative Possession Value Added for both sides. It was a relatively even game in terms of Possession Value as the game turned into a very ‘end-to-end’ affair as is quite common for Southampton games. Arsenal impressed and took advantages of their chances (Lacazette’s aside) to comfortably overcome a very tough to beat Southampton side. 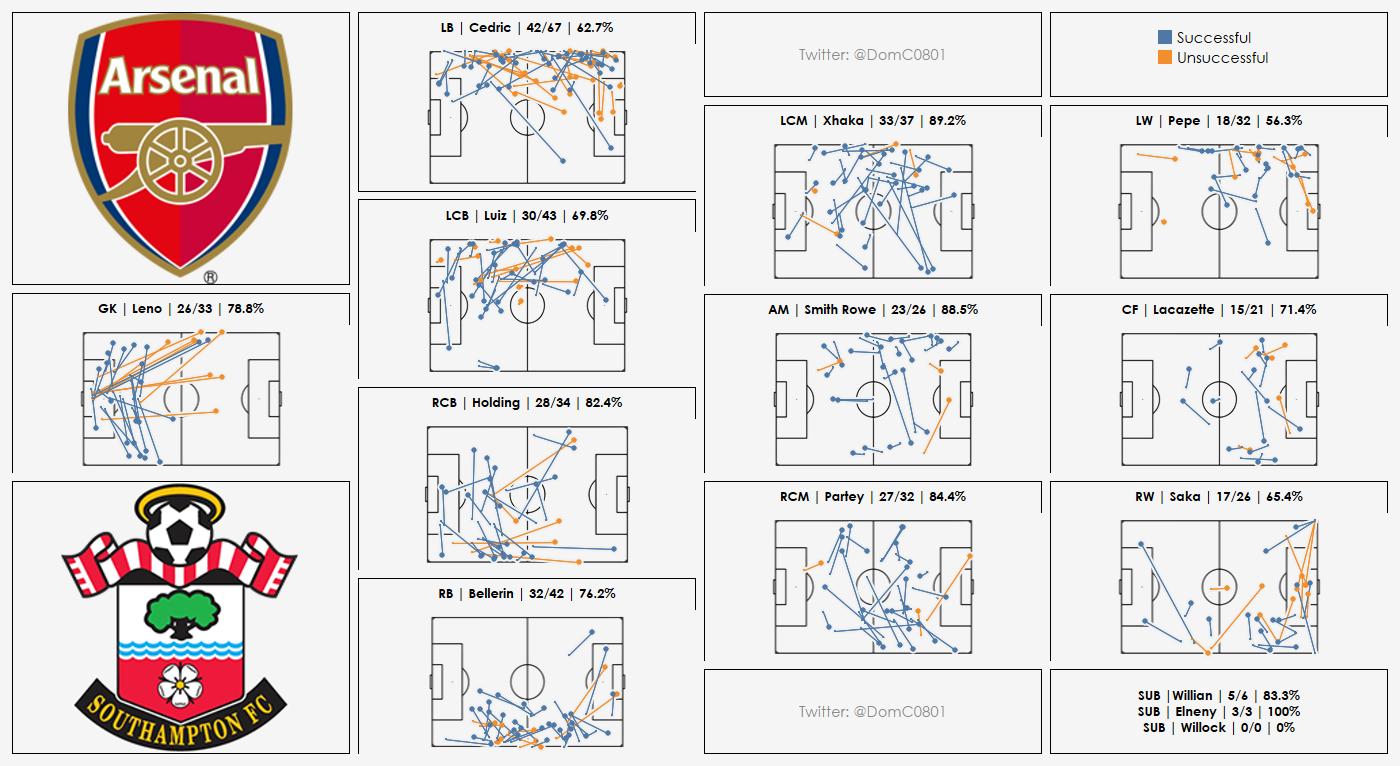 Above are the pass Maps for each of the starting XI (excuse the weird Half boxes around each one – the program I use to make these was acting up!). Strangely the majority of Arsenal’s possession seemed to go through Cedric, with his 67 pass attempts being 24 attempts more than his nearest teammate. The Portugese international did a good job deputising for the injured Kieran Tierney and managed to consistently cause problems for his former side. Thomas Partey and Granit Xhaka were effective in possession, with the duo combining for 8 Progressive Passes and 2 passes into the penalty area. Bukayo Saka and Nicolas Pepe did very well on each wing as they took advantage of Southampton’s injury issues at both full-back positions, putting in impressive goal-scoring performances. 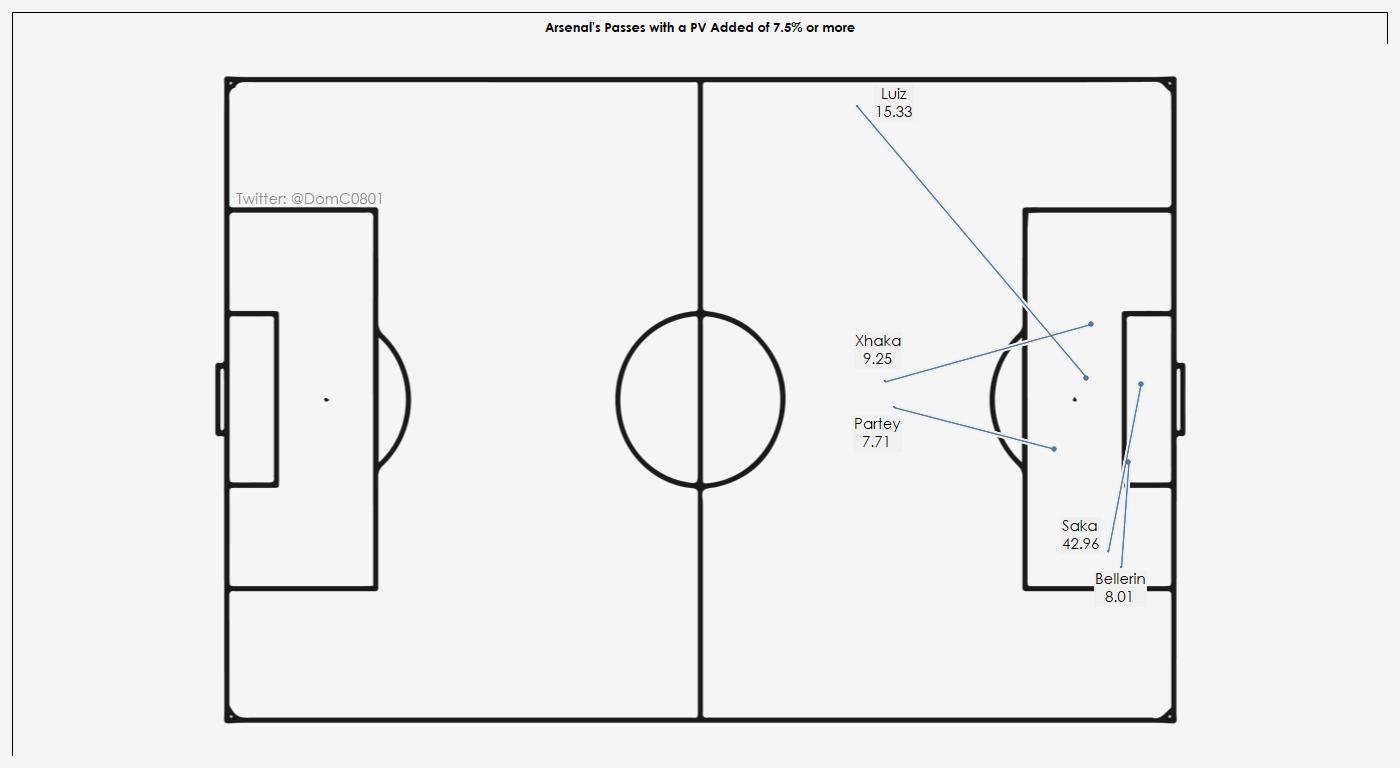 Above are the passes which increased Arsenal’s chances of scoring in that possession by at least 7.5%. It is encouraging to see variety in these passes, with a pass coming from each flank and central areas. 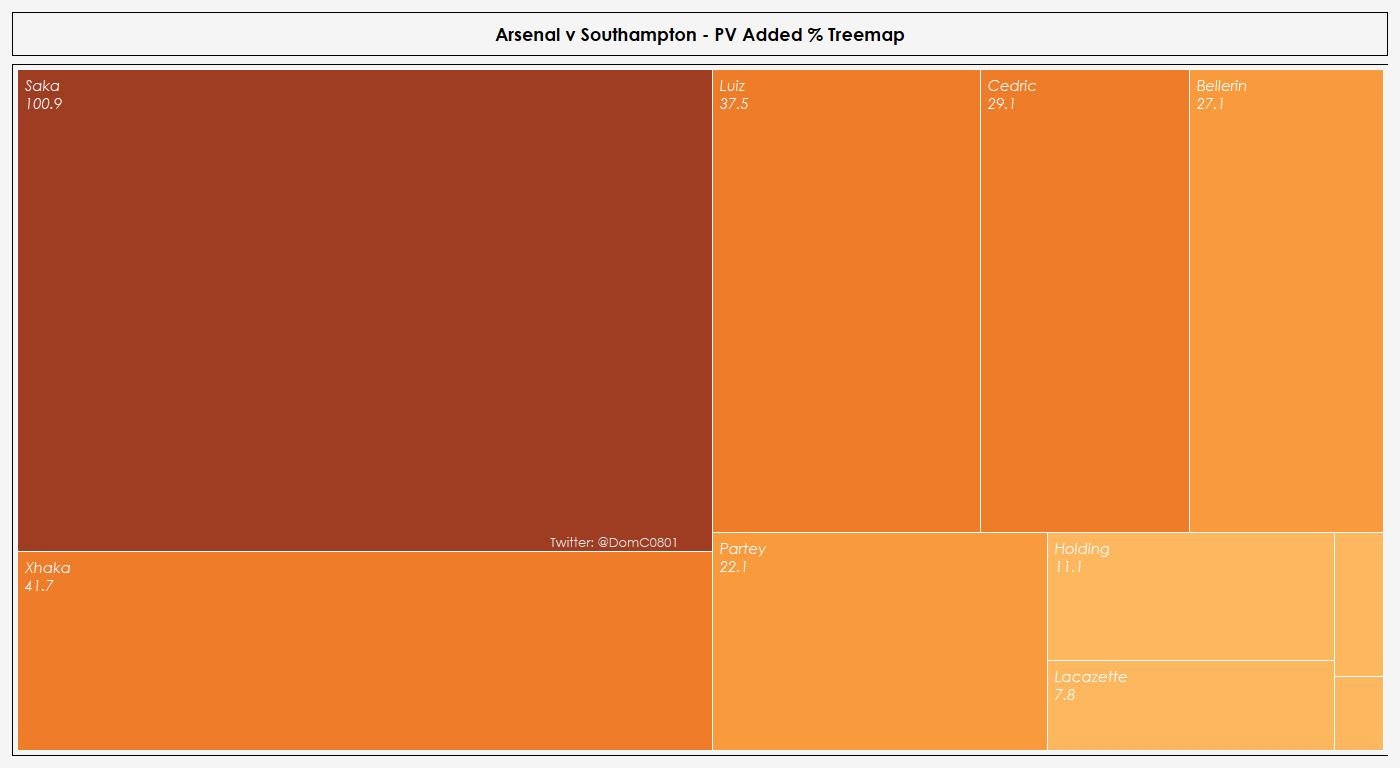 The above is a Tree Map showing the Possession Value Added by the Arsenal players as a proportion of the overall PVA. Bukayo Saka starred, as his passing increased Arsenal’s chances of scoring in each possession he was involved in by 100.9% (!!!). Granit Xhaka also played a much more creative role, as the Swiss international seems much more capable of effecting possessions in the final third when partnered with Thomas Partey. 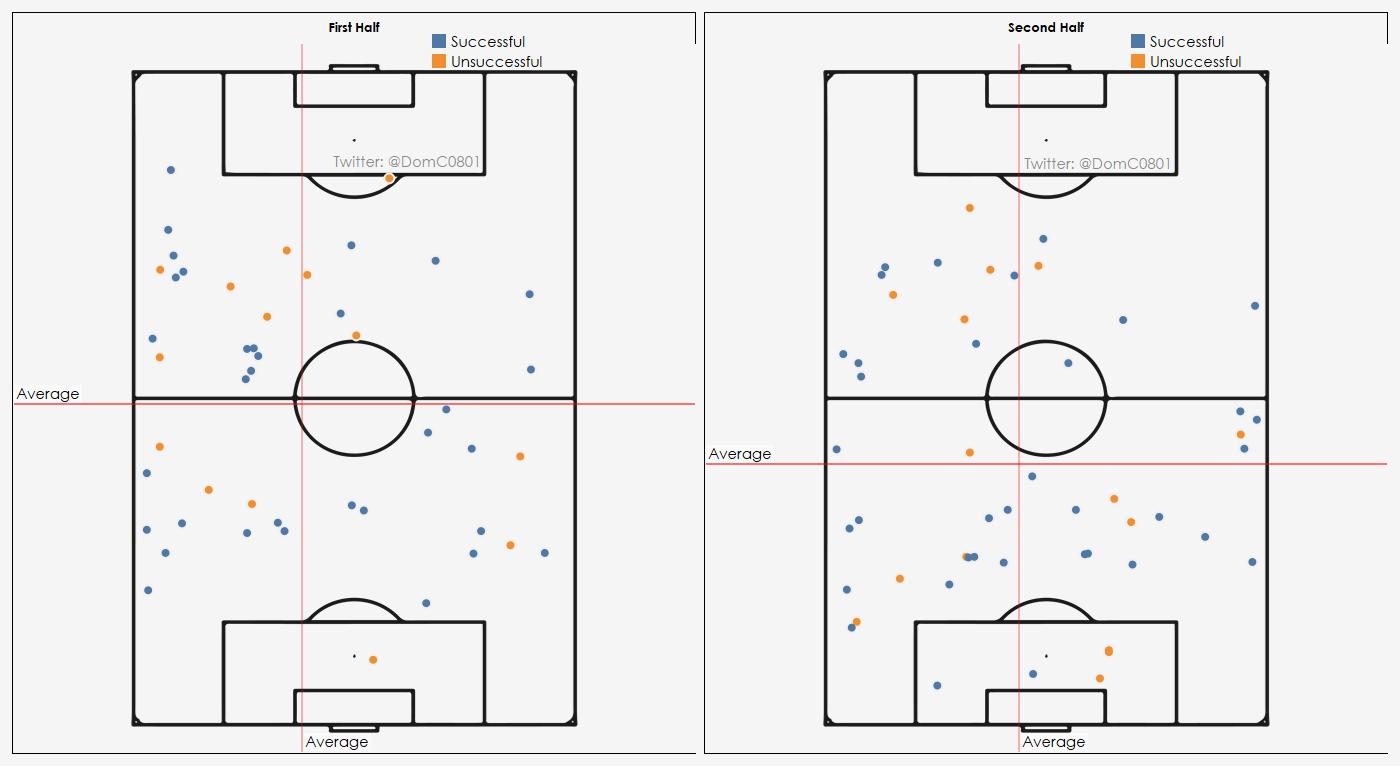 The above shows the defensive actions Arsenal attempted in both halves and the average area on the pitch of their attempts. Arsenal’s press was very effective in the first half, as they looked to target Southampton’s right-hand side. This high press allowed Arsenal to get Southampton out of their flow in build-up and it led to some high quality chances early on. It is very impressive that Arsenal managed to press in a better and more effective way than Southampton (as shown below), who are on the league’s best pressing sides. 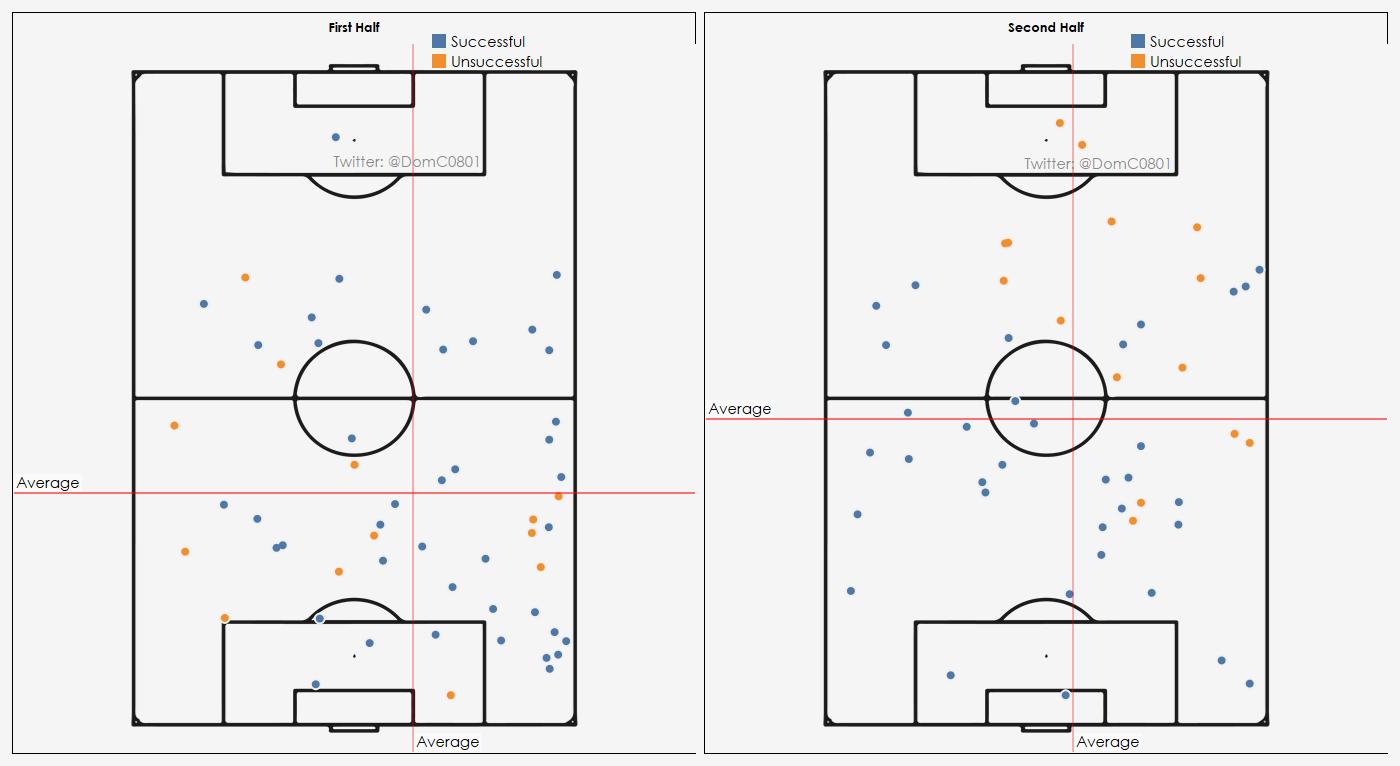 That’s all for this week. Arsenal play title chasing Manchester United at the Emirates this weekend with the Gunners looking to do the double over United for the first time since the 2006/07 season.

‘We are looking for diamonds’ Jonas Eidevall...

Independent football regulator on the horizon as...

A good manager makes a higher % of players a higher % better than they have historically played. That is what makes the team perform better. Xhaka, Saka, Lacazette, ESR, Soares, Tierney, Ceballos, Mo, Holding, Leno, Luiz, Mustafi have All now played better under Mikel. Gabriel, Auba, Willock, AMN, Ozil, Martinelli?, Bellerin?, Partey, Nketiah, Pepe, are more uncertain at the moment. I mean Either, they consistently played at current levels OR current levels are uncertain. Doozi, Willian, they have regressed under Arteta. Those are reasonably good results in current conditions. Big big tests coming up to see how sustainable Or… Read more »

What an extraordinary load of comments. Are you honestly saying that new players have regressed under Arteta and that players like Partey, Aub, Gabriel etc. are uncertain. Total utter nonsense.

I think he’s saying with those players you listed it’s unclear if Arteta has them performing at a higher level than under previous managers – i.e. their play would be stable, he only said Guendouzi and Willian regressed. That’s not saying Partey is bad (clearly he’s great) it’s saying that we don’t know if his level now is higher than his level was at Atletico Madrid.

Anyways I’d agree with the overall premise that Arteta does seem to be getting more performance out of a good few of our players. Released the handbrake or whatever. #ArtetaIn

Ozil is gone mate or his transfer is like one of his slow, never ending post substitution walks.. loved em, frustrated the hell out of all the opposition in the ground or tele

Really encouraging perfomance. What a player Saka! Thanks for the breakdown Dom

Great as always. Just wondering why we don’t have a steep PVA line on the first chart before they score their goal (for Laca’s missed 1v1)? What does this chart measure?

It’s the % of the time an action leads to a goal. Like xG, but for everything. I am also a bit confused why it doesn’t seem to register, both the interception, Xhaka’s through ball and Laca’s shot would have added value I think?

No need to press United hard, since they sit so deep, more about enticing them out.

So I guess we could spend the extra energy vs Southampton.

Good to see we are getting the balance right between pressing/buildup from one opposition team to the next.

Did the 3rd goal show a way to use William?
He attacked a bit down the left gradually drawing all the Southampton players toward him.
Then he gives up and plays it back to Cedric as usual, and Cedric pings a brilliant crossfield ball to Saka who is now totally free on the right to play the cross for Lacazette to score.
All due to Willian pulling them out of shape!
Tactical masterclass! 😉