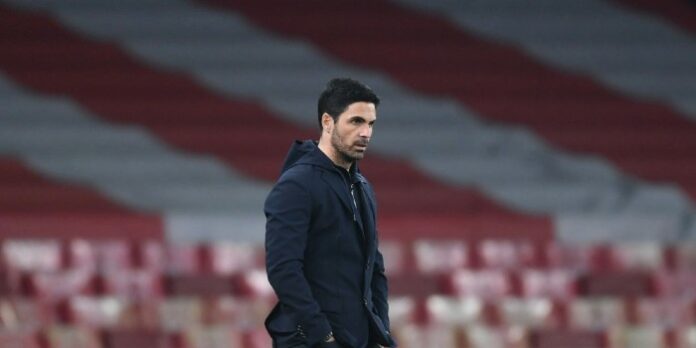 Mikel Arteta says there are no excuses for his side’s below-par performance against Olympiacos after Arsenal were beaten 1-0 at the Emirates.

While the Gunners secured safe passage to the quarter-finals thanks to the lead established in the first leg, the Spaniard was less than impressed by his players’ sloppiness on the ball which again cost them a goal.

Not for the first time in recent weeks, Dani Ceballos was caught labouring on the ball and the Greek side counter-attacked to score through Youssef El-Arabi’s deflected effort.

With 39 minutes still left on the clock, it made for a nervy second half; one that Arteta says his stars must learn from.

“I am pleased because we are through and last year we went out by them,” said the boss.

“If I have to evaluate the performance with what we’ve done today with the ball in particular, then it’s nowhere near the standards we have set for ourselves.

“We made it really difficult because we didn’t have any stability when you give the amount of balls away that we have in the game.

“When that happens, you don’t have the control to manage the tie in the way that we should have done and that’s related to the amount of chances we missed again.

“It’s football and I don’t want any of those excuses. I’ll say it again, it’s not anywhere near the level we want when we’re on the ball.”

Asked whether it matters how his side plays if they still get through, he responded: “It does matter because it’s not [just] about the result, it’s about the performance and the direction that we want to take, and as well the confidence and the level of consistency that we have to show to have a great performance and do it again. For me, it does matter, but obviously, I’m really happy that we are through.”

The draw for the next round will take place on Friday with Manchester United, Slavia Prague, Granada, Roma, Villarreal, Ajax and Sp*rs’ conquerers Dinamo Zagreb all in the hat.

“They’re all really good teams and the competition is complicated so let’s see,” said Arteta when asked to comment on the quality of the sides left in the competition.

He also touched on Jose Mourino’s side crashing out of Europe after Sunday’s north London derby defeat.

Sp*rs travelled to Croatia with a two-goal first leg advantage but went down 3-0 despite Dinamo’s manager being jailed earlier in the week.

With a straight face, Arteta said: “It shows as well the level of opposition, that people take for granted that you play against an opponent and you will go through, because the name of the club that they represent. It is not like that, every team in Europe is difficult to beat.”

We are steadily unstable

Not a performance that will live long in the memory but the important thing is we didn’t lose the second leg 3-0. It would take a pretty hapless team with a pretty incompetent manager to throw away a 2 goal advantage from the first leg.

It couldn’t just be the managers fault, the players have to take responsibility at this stage of a tournament!

I’m not sure that could ever happen tbf

Especially if that team was distracted by an open-top bus parade for a rabona that turned out to be of no actual consequence whatsoever.

an open-top bus parade for a rabona ribena that turned out to be of no actual consequence whatsoever.

And it’s on DVD

Mourinho’s salty salty tears should be bottled in order to cure the world of depression. If only he could find a club that could bottle everything for him….

If you ask me last week do I take a win against Sp*rs and then making quarter finals, I’d say YES PLEASE! 🙂

It’s true we weren’t anywhere near the level we should have been today and there is good ground for criticisms at various things.

But at least we aren’t Spuds. Imagine how they must feel having been reminded what their true level is and the fact that after flying high for way longer than they deserved to they are now back wherw they belong. In Spursland, where thing go spursy and spudsy all the time.

Every player should donate their wages to charity after his performance. Arteta should have pulled Auba off at half time. Very poor game management.

Arteta should have pulled Auba off at half time.

Man if there are any Zagreb fans in Singapore, meet me at Harry’s bar Harbourfront next evening and I will buy you a beer.

Can you do that in Singapore now?
Drinking a beer in a bar? 😭 omg

I hope that Arteta learned his lesson from what happened today. He should have played his strongest team and then told them to go out there and impose themselves on Olympiacos. We could have rested players after we were a couple of goals ahead. Instead, he picked a weaker line-up and they were unsure whether to push forward or defend. Fortunately we got away with it. Unlike Spuds.

You can’t afford to gamble in these big European ties.

Did you read the By The Numbers? We were dominant, but not clinical. Auba had an off night in front of goal. How he missed that 1 on 1 I don’t know.

What are you talking about? We conceded to their only chance and took a 3-1 away win into this game. It’s not idea to lose but after a tough game against Spurs it’s fine.

Auba could (should) have scored 3 Pepe 3 – one after going past the keeper early in the game, at least could have passed to Auba far post to take his tally above to 4; – one when auba passed to him through on goal in the first half and he just didn’t receive it right – the ESR block Odegaard could have scored one too These were all easy to score chances, and except the auba backheel their keeper didn’t have to do much So, I think we could have scored quite a few, so I guess being sloppy… Read more »

Arteta is at a point in both Europa and league where his lineup will be critical. Barring injuries, neither Ceballos nor El Neny can be starters from here on. He also will need to find room for Martinelli to bring some energy. Auba appears to have become a pedestrian finisher, so thegaffer’s choices will be key.

A very disagreeable game to watch- and it probably started with the lineup. There were players who needed to impress thrown in with tired players; overly complicated technical moves and mental mistakes led to a complete lack of cohesion. How many passes were made to space with the intended recipient still glued to their spot, 30 yards away? Never mind being on the same page, being in the same library would have been an improvement.

A horrible ugly performance tonight.A few of the players were running on empty tonight after their excursions in the NLD.Luiz Tierney ESR and Xhaka looked like they were running in quicksand.Very very fortunate olympiacos never had the quality to punish us further.Like everyone is saying what was happening in Zagreb took our minds off a very forgettable display.I believe all the teams left in the draw are beatable but they are probably saying the same thing about us.

I agree it was a tired performance but look at the chances we created. Had Auba + Pepe put them away we would have scored truckload of goals. So, passing was sloppy I agree but we were creative and finding the right runs. So, that is a positive I will take from the game 🙂

Arteta can’t even take a stab at Sp*rs even when it’s presented to him on a plate like that. Maan. Impressed and disappointed at the same time

He doesn’t need to go down to the level of Jose. Class club acts class

What I notice is that he trio of Xhaka, Elneny and Ceballos does not work at all. The faster Mikel gets that, the better for all of us around the world.

It’s the first time I can remember all 3 starting together.

Can we please draw granada or Zagreb. wouldn’t that be nice.

We’ll of course draw MU or Roma,but my hope is Granada. They had a shitload of luck against Molde and should have lost over two legs. The weakest team of the remaining ones.