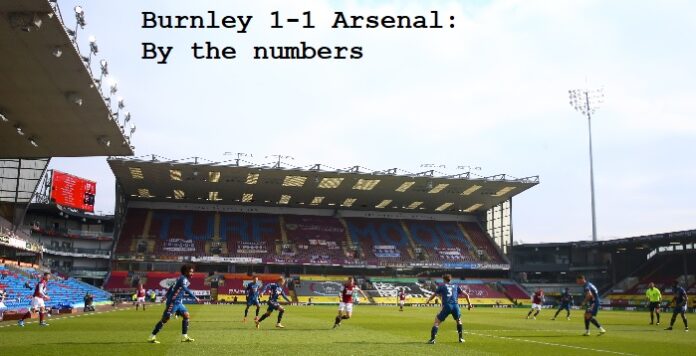 Arsenal played pretty well in this match. They created enough that they should have scored more than 1 goal, even without good finishing they were denied a clear penalty that could have bailed them out, even worse Arsenal basically kicked the ball into their own net while keeping Burnley’s attack well away from their goal.

The result put the already remote chances of Arsenal getting into the top 4 even further away and makes finishing in the top 6 a very tough task, with FiveThirtyEight giving Arsenal just a 14% chance before Sunday’s fixtures. The two points lost here will make the following 11 days very important for Arsenal’s season, with the round of 16 Europa Leauge matches sandwiching the North London Derby.

Burnley 1-1 Arsenal: By the graphs 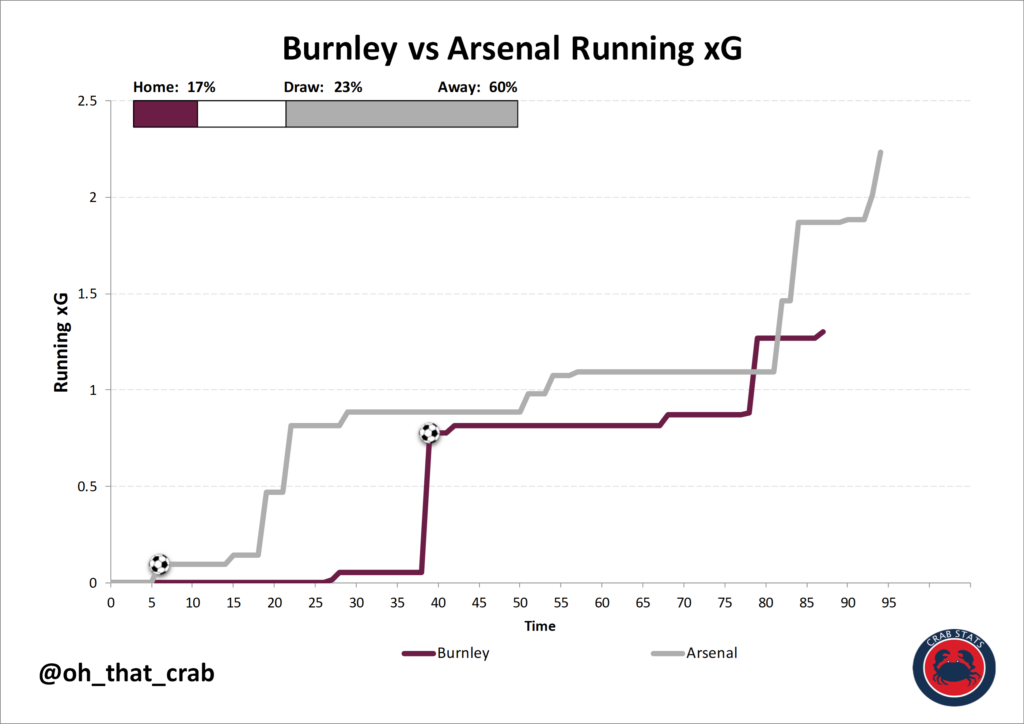 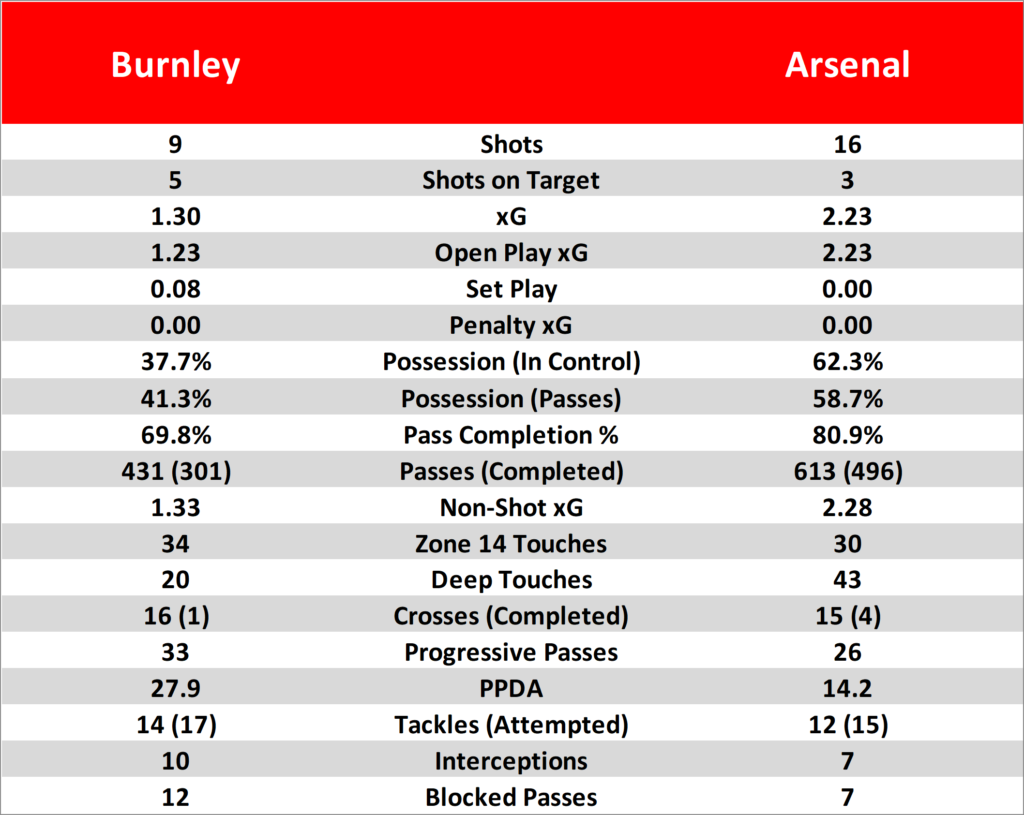 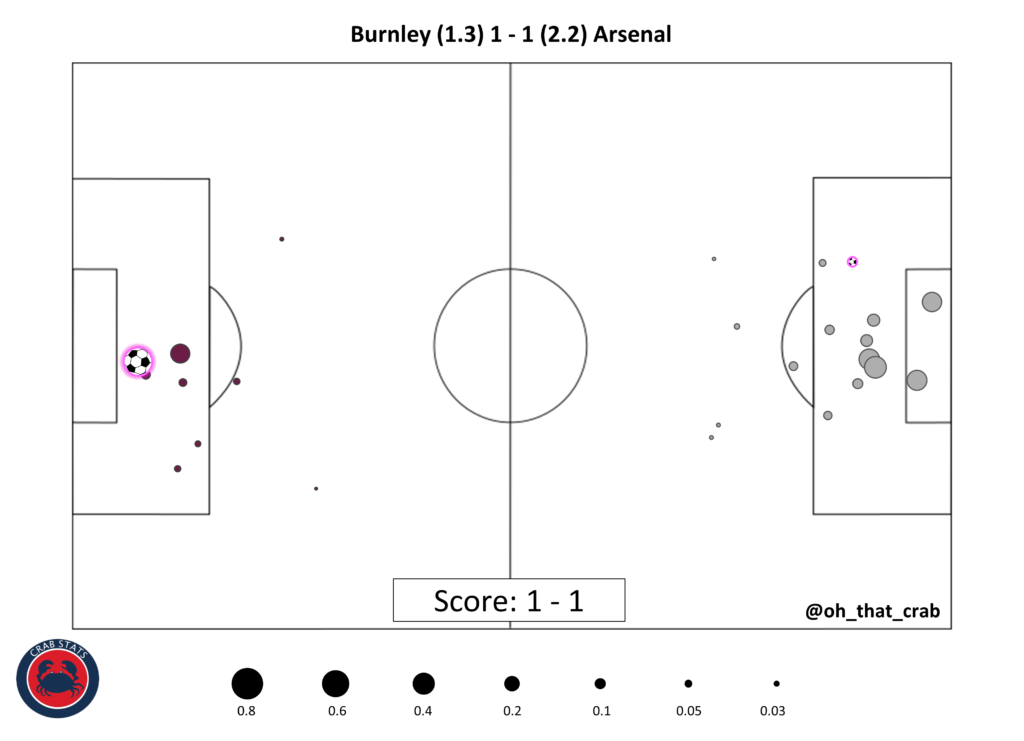 Burnley 1-1 Arsenal: By the numbers

16 – Shots from Arsenal in this match

4 – Shots for both Bukayo Saka and Pierre-Emerick Aubameyang, leading all players

3 – Shots on target for Arsenal 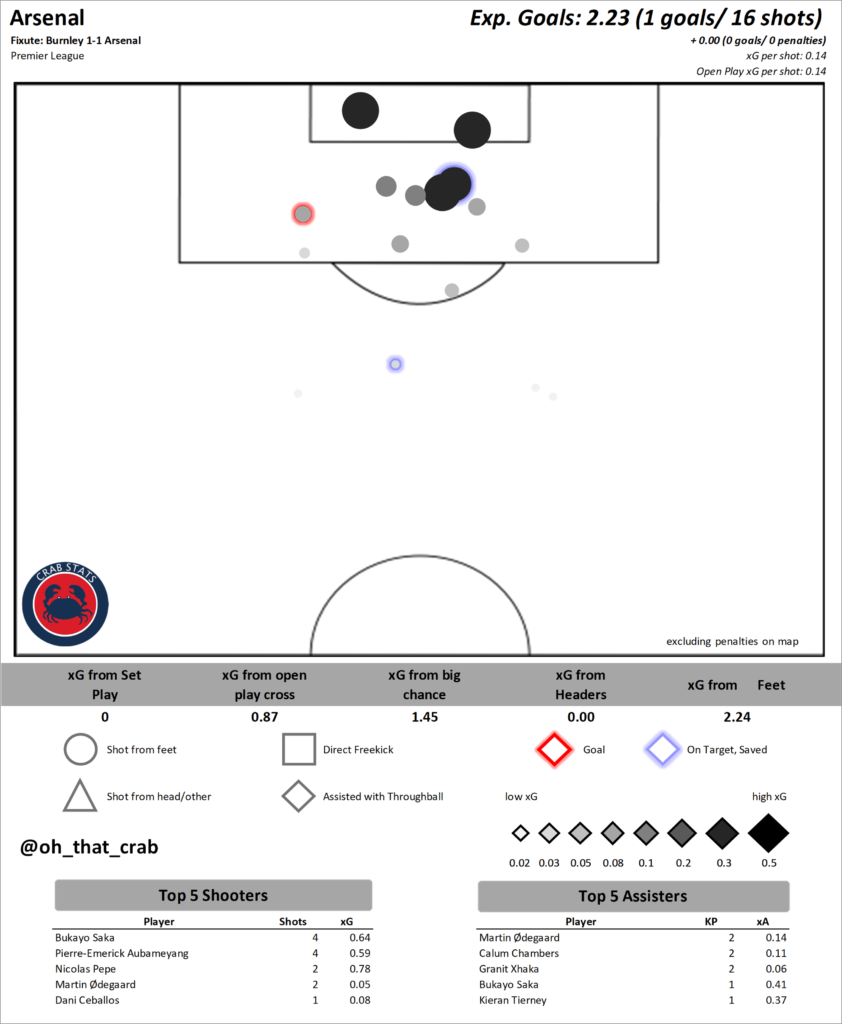 Arsenal probably did enough to create 2 or 3 goals, running a simulation of Arsenal’s shots it was more likely that given the probabilities of each shot turning into a goal it was more likely that Arsenal would score 3 (23%) goals than the 1 (22%) goal they did score. Arsenal was screwed by the handball decision but not converting the chances that they created was the bigger issue.

204 – Pressure that Burnley had against Arsenal in this match

34 – Progressive passes completed by Arsenal in this match.

One of the things that I did not expect before this match was that Burnley was going to engage Arsenal high up the pitch. Burnley have had a fair amount of high-pressure events this season, but this match was by far the most they had done (the previous high was 63, which they exceeded by nearly 30% in this match).

Arsenal came out well in this match but then from the 30th to 80th minutes could not do much against Burnley.

1 – Pass completed in the box

271 – Minutes played (including the Europa League) since Lacazette’s last non-penalty shot. His last shot came in the 65th minute against Manchester United on January 30th.

I was nervous when I saw that Alexandre Lacazette was getting ready to come on during this game. It was clear that Arsenal needed to do something but I was not sure that the Arsenal striker was going to be the right choice. Before the change, Pierre-Emerick Aubameyang was doing really well as the main striker, with Martin Odegaard doing well as the central attacking midfielder.

Lacazette has also been in pretty bad form. He has gone over a month without getting a non-penalty shot and I think a lot of the other things that people point to with him are overrated. He is mostly average or better as a striker doing attacking midfielder type things but when he is compared to actual attacking midfielders he looks less good. With Lacazette playing as a number 10, Arsenal has generally looked very dysfunctional in attack and in this match, the switch to him playing that role seemed to kill any attacking momentum that Arsenal had, until Burnley dropped into 11 men in the box mode for the last 10 minutes.

Albert Sambi Lokonga: By the numbers

Anyone knows if Blogs is ok? Hasn’t been active on Twitter or the blog this week.

Unfortunately his dad passed away.

Yeah, saw blog’s post on Insta. Sad tidings. May he rest in peace.

Is that right, bloody hell thats awful , so sorry to hear that Andrew, please accept my condolences….

Damn, that’s terrible news. All the best to you Andrew and your family if you ever read this. I know it’s not an easy thing to process.

At least Laca got the world record for the loudest scream.

We weren’t good against the pressure, Xhaka obviously but also Sold missing a sidefoot on his favourite foot.

A match to forget…

Like I said in a previous post, I hate losing to Burnley. It’s the blandness of them, their dick head coach and everything else.

It’s certainly effective though – against us anyway – given they’ve taken four points from six in the PL. Perhaps we need to learn how to deal with “bland” teams better?

No foot Norbert
Reply to  Riku

We’ll be lucky to stay up with these owners in 5 years time honestly.

Salibaba and the Forty Thieves
Reply to  Riku

Thank you posting this. It is evidence that suggests Arteta has “support” from the board because he is their cheapest option. As far as I am concerned, Mikel is like a plucky start-up and the club executives are hoping to avoid paying a fortune.

On another note, I’d like to extend my sincerest condolences to Andrew. I hope you and your family are handling things as best as you can.

To an extent, a triumph of performance over result. And, as it’s always the result that matters we fell short. Our hopes of progress this season will almost certainly be determined by the next three games so let’s hope the squad is up for it and we get the results needed.

A contrast to the early part of Emmery’s reign where we often had results that our performances didn’t merit.

I think I’d rather be in the position we are now where I can see the progress and the incremental improvements in our performances, even tough it is really frustrating.

As the great Bill Walsh said “the score looks after itself”, well maybe not so much for Arsenal right now but I believe that we are moving in the right direction, if we continue in this vein the results will follow, the next step is consistency.

Can we call this sentiment of the season? “the results are coming”…

If we got the decisions Man Utd get on a weekly basis we’d be in 4th place.

My enjoyment of football is being drained by watching this bullshit week after week. Yes we didn’t take out chances- but getting a win when not playing your best is as enjoyable to me as winning 2-0.

We’ve been robbed of points far too often this season and I go into games expecting it now. How can that be right?

ManU have won an absurd-seeming number of penalties. I’ve seen many of them, but not all. I think they’ve deserved just about every one I’ve seen.

They have many, many attacking players who carry the ball at pace in the box. Do that often enough, and defenders will panic and foul.

I dislike ManU but they are considerably more skilled up front, and even under OGS’ flaccid system, are impressively front-footed when they get near the box. We could learn a thing or two.

“I think they’ve deserved just about every one I’ve seen.”

Even if that were true (which I’m not sure it is). The key part here is that they’re getting the penalties they deserve. Whereas we’re not getting these and having “soft” pens and reds given against us. Again if we were getting the calls man utd get week in week out we’d be 4th.

I know people argue “if we scored our chances VAR wouldn’t matter” but that’s just not true. All teams have games where the ball doesn’t want to go in, and the successful ones tend to get a lucky break somehow. If VAR doesn’t ruin Wolves and Aston Villa we would be on a fantastic run of form, with players full of confidence, so the misses probably don’t happen.

Thanks for the numbers. And condolences to Blogs for your dad passing away. Tough. The numbers confirmed what I saw watching the game. Lacazette for Ødegaard was a strange substitution and it didn’t work. Why does Arsenal play with such lack of intensity, lacklustre, almost disinterested at times. In any game it feels they play okay for periods, 10 -15 min at a time but then concentration drops, pace slows down and rhythm is lost. And (almost inevitably) we give a goal to the opponents. Do the numbers back up this very subjective observations thinking back to several games this… Read more »

Arteta flatters to deceive. He gives gorgeous press conference. Quite literally the opposite end of the spectrum from Emery. But more than a year into his tenure, his team is mid-table and deservedly so. Inexplicable man management. Laca as 10. Persisting with Willian & Luiz. Only playing ESR (originally) out of desperation. Persisting with Xhaka, who will never be good enough for a top 4 side. Why does Xhaka get so many touches? Because other teams know he is the weak link and let him have the ball. You can dislike Leno’s pass to Xhaka, and I do, but ultimately… Read more »

Why are we playing Willian over Martinelli?

My home is protected by a sphinx, which only asks one single question from every visitor to decide whether they shall pass or not.
Now can you guess which question is it…

Martinelli still not 100% from his earlier, pretty serious, injury…?

I didn’t see Lacazette struggle. He wasn’t on long enough. When he got on we had much more effective attacks. Case of what you want people to see in Stats. Auba was ineffective second part of first half and second half too. We had little outlet in second half until later when Pepe and Laca came on (arguably ceballos should have been played higher. Sure Xhaka may have made yet another error but we had an entire half to score. We were wasteful with Saka getting into good positions but unable to apply calm and finish, ditto Auba bar his… Read more »

Not sure we created that much though… xG massively inflated by those 2 close chances by Auba and Saka where they had little control.

Deepest condolences to Andrew Mangan on the passing of his father. RIP Terry

Granit Xhaka was the player that seemed more often like the player making himself available.

Yeah how’d that work out again?

Burnley at the specialists in shots saved in prime positions.

Would be useful to compare Burnley vs the average team to get a more balanced view.

But the point remains, that even against a team who save a lot of shots, you must still put away your chances.